The latest Hyundai i10, one of an increasingly small number of city cars still powered by something other than an electric motor. This model, which launched in 2020, is the third generation of the Korean company’s smallest vehicle and it comes in just one body style, a 5-door hatchback, with a choice of 3 petrol engines, 2 transmissions and 4 trim specifications.

Manufacturers are starting to move away from city cars as the margins on them aren’t as healthy as they are on bigger vehicles, but if the breed dies out entirely it’ll be a shame – because the i10 Mk3 is exceptional. It’s cheap to lease, it comes with loads of equipment as standard and it feels like a much more elegant car out on open roads than you’d ever give it credit for. Rivals include the Volkswagen up! and SEAT Mii Electric, as well as the Toyota Aygo, Citroen C1 and Peugeot 108 trio, and even the car most closely related to the i10, Kia’s Picanto. But it’s this Hyundai which is the current class leader in this section. It genuinely is that simple. 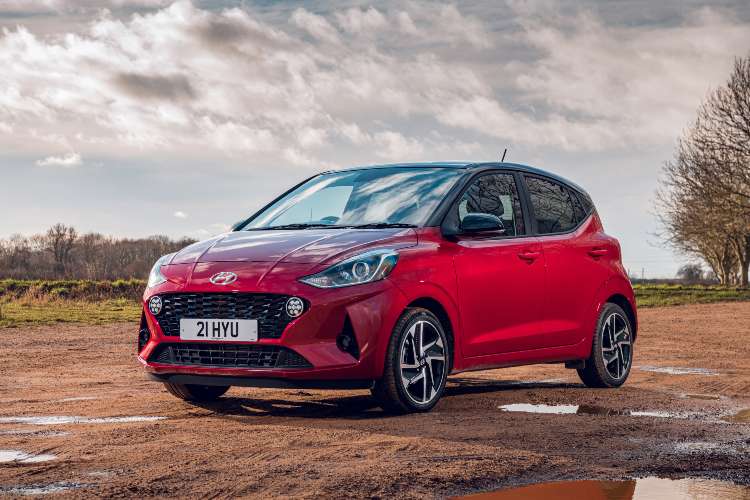 The Hyundai i10 Mk3 is a really sharp little thing to behold. It’s a gentle evolution of the Mk2’s body but, considering how narrow, upright and cheap-looking the i10 Mk1 of 2007-2013 appeared, this latest version is a revelation. All models have an appealing front end, with round daytime running lamps (DRLs) on SE, SE Connect and Premium cars, while the sporty N Line range-topper gains distinctive triple-blade DRLs instead. Only base SE cars have steel wheels (14 inches with hub caps), every other version of the i10 coming on either 15- or 16-inch alloys. On the Premium and N Line i10s, Hyundai offers a two-tone colour scheme that paints the roof black if you so wish, while at the back the clean design of the Mk2 is tidied up for the Mk3 so it looks less like the original Toyota Yaris of 1999 when you’re viewing the car from the rear.

It’s the interior which is the real standout, though. Neat hexagonal design motifs adorn the dashboard, door cards and speakers of the Premium model, while light upholstery choices and fascia trims mean the cabin ambience is breezy and cheerful, not dour and dark. Most of the major controls and buttons feel solid and expensive to operate, while there’s a full complement of 5 seats inside. Admittedly, sitting centre-rear for any length of time in an i10, flanked on either side by large passengers, wouldn’t be the most comfortable experience, but it seems plausible that three adults could sit in the back of the car for shorter journeys. 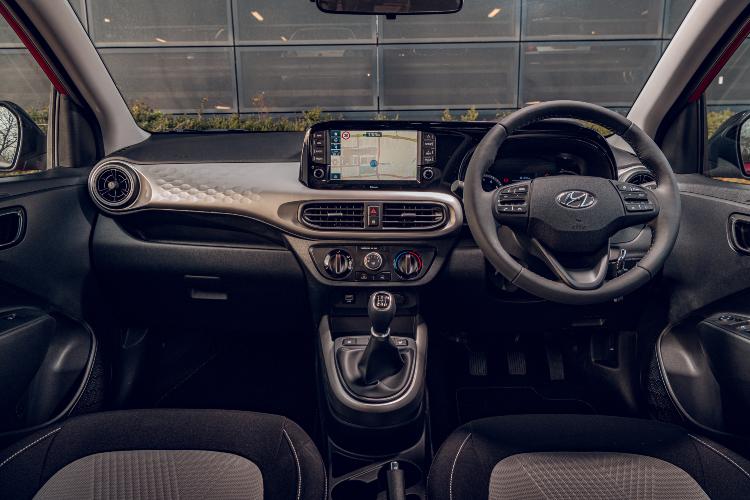 Precious little, if we’re honest. OK, you sit a bit high behind the Hyundai i10’s steering wheel, even if you adjust the driver’s seat right down to its lowest position, and some of the plastics used inside are obviously on the more… affordable side of things. But that’s not unusual for the city car class, so the Hyundai shouldn’t be criticised for such cost-conscious construction.

Perhaps the biggest issue is that in-built satellite navigation is only available through a Tech Pack optional extra on the Premium and N Line cars, but as all i10s bar the base SE come with an 8-inch touchscreen infotainment system which supports both Apple CarPlay and Android Auto – so you can use your smartphone’s mapping instead – this isn’t the major drawback it might otherwise be. 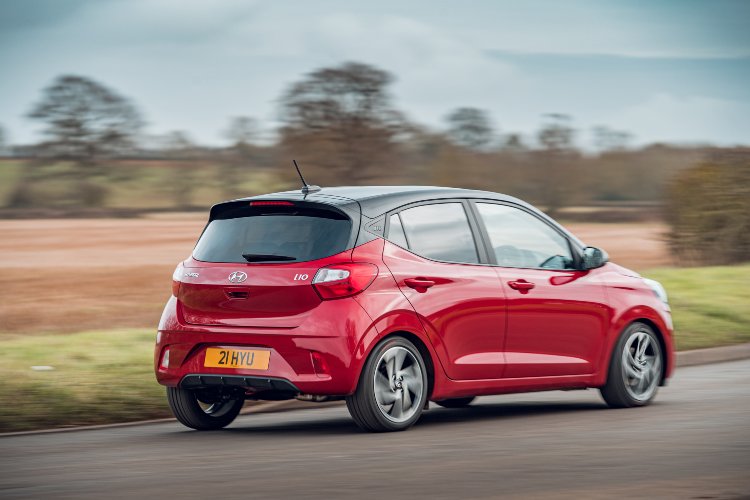 There are two normally aspirated MPI petrol engines, a 1.0-litre 3-cylinder unit with 67hp and then a 1.2-litre 4-cylinder unit with 84hp, both of which are available for the majority of the range. The N Line comes exclusively with a turbocharged 1.0-litre 3-cylinder T-GDI engine with 100hp, which also has impressive torque of 172Nm, so it’s a little quicker than the other i10s, but in truth the 1.2-litre engine is more than fine enough for such a small car.

What will astound you about the Hyundai i10 is how refined and ‘big car’ it is in feel. The 4-cylinder engine, for instance, is barely audible when you turn it over and it sits at idle, and it doesn’t really become noisy unless you rev it right out. The 5-speed manual gearbox is sweet to operate and the Hyundai’s steering is a major plus point. It’s naturally light and twirly at town speeds, which – coupled with the tight turning circle – makes the i10 wonderfully manoeuvrable in city streets. But as you get out onto open and faster roads, the steering weights up so that the car never feels nervous and flighty at speed.

In truth, the Hyundai is planted and secure as it travels along, rarely deflected from its path by bumps in the road. Nor is it particularly buffeted about in crosswinds, which helps it project the air of being a larger, more premium machine than it actually is. However, it’s the ride quality and refinement which win the day. Even on the 16-inch wheels of a Premium model, the i10 is superb at smothering out rough road surfaces, while tyre roar is not something which makes itself loudly known in the cabin at motorway speeds. Better still, no matter how you drive it, the 1.2 seemingly refuses to dip much beneath 47mpg, with in excess of 50mpg easily and regularly achievable in normal daily motoring.

Sure, with 84hp and just 118Nm, the i10 1.2 isn’t exactly fast – it’ll take the manual model 12.6 seconds to hit 62mph from rest and its top speed is just 106mph – but it’s more than zippy enough for day-to-day requirements. Also, try and avoid the automatic models of the MPI cars, as they are robotised versions of the 5-speed manual and not the most refined transmissions in the world. Further, they make both i10s slower for acceleration and they increase the fuel consumption as well. 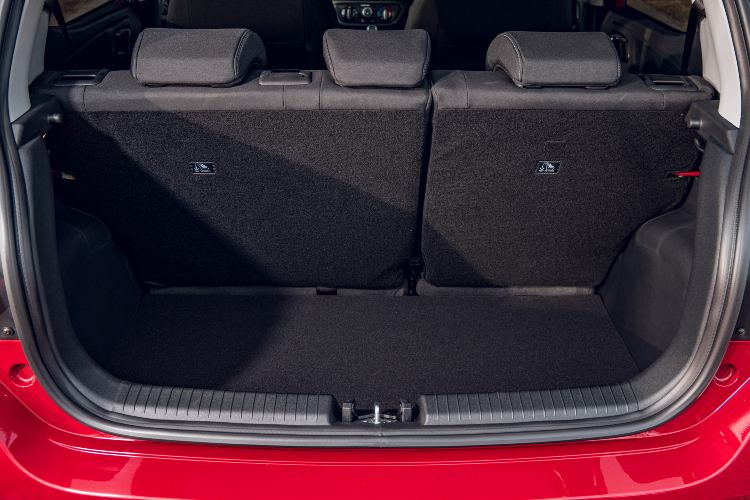 With a 252-litre boot, the Hyundai i10 has claimed class-leading space in the back of it. Fold down the 60/40 split rear seats and fully 1050 of capacity is on offer, which is remarkable for a city car. Additional practicality touches include a pair of luggage hooks on either side of the boot, to keep shopping upright, and good positioning of the handles which allow for folding of the rear-seat backs.

Inside the car, there are 2 cupholders just behind the gear lever, plus a large, flat storage space ahead of it which can easily accommodate a smartphone. All four door pockets have sculpted recesses to accommodate large bottles, although bear in mind that there’s not much to the door pockets beyond that – so if you do indeed put a bottle in there, that’s about all you’ll fit in these storage compartments.

Elsewhere, a flat tray runs alongside the handbrake that would be suitable for coins, pens and so on, while the glovebox is a good size and has a small shelf hollowed into the dashboard above it; useful, for the passenger’s odds and ends. 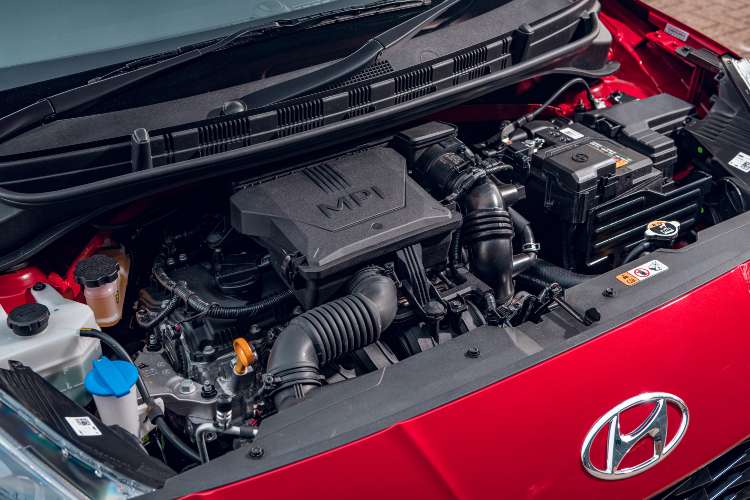 The Hyundai i10 is an inexpensive new car and it’s therefore very cheap to lease. All models come with at least air conditioning, Bluetooth, DAB, cruise control, electric windows all round and also some useful safety items like a forward collision warning and avoidance system, high beam assist, and lane departure warning with lane keep assist. Stepping up to SE Connect includes the 8-inch infotainment with Apple CarPlay and Android Auto connectivity, while the Premium includes luxuries like heated front seats, a heated steering wheel and 16-inch alloy wheels.

Hyundai claims anything between 52.3- and 56.5mpg combined fuel economy for all models of the i10, while CO2 emissions range from 104- to 108g/km on the regular range, and 123g/km on the racier i10 N Line 1.0 T-GDI. Therefore, tax and fuel costs will not be astronomical in the slightest. The final cherry on the cake is Hyundai’s 5-year, unlimited-mileage warranty, which includes 5 years of roadside assistance and 5 years of vehicle health checks into the bargain. 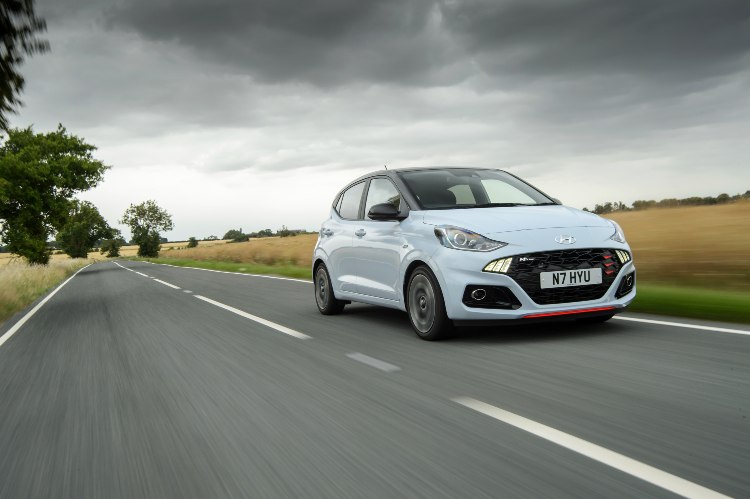 The Hyundai i10 N Line doesn’t just have the most powerful, turbocharged engine, it also has different looks inside and out to make it appear sportier, while it further benefits from revised suspension which is firmer to make it drive sharply. This does have a negative impact on the i10’s brilliant ride quality, so think carefully about whether you need the 100hp engine before choosing the N Line – which is also the most expensive i10 model of them all, obviously. We’d recommend sticking with a 1.2-litre Premium, like our test car, for the best Hyundai city car experience.

An overtly more stylish product than the Hyundai, but it’s pricier to lease and not as practical inside.

Funky looks and a nice enough car to live with, yet the Hyundai feels far more refined in several key areas.

Long the benchmark in this class, its ageing nature means it has been surpassed by the Hyundai i10 Mk3.

“What will astound you about the Hyundai i10 is how refined and ‘big car’ it is in feel - a class leader.”

Three Things To Remember About The Hyundai i10:

Fiat 500 Review
The Fiat 500 feels like it's been around forever, but does it still deliver? Mark Nichol finds out.Read Review
Fiat 500 Vs Vauxhall Corsa
Looking for a small car but can't choose between the Fiat 500 and Vauxhall Corsa? We put the two head-to-head...Read More
Car Body Types: The Ultimate Guide
Today we have a wide variety of car styles, but what do they all mean and which is best for you?Read Guide
10 Best Cars For New Drivers
Here are our 10 favourite cars for news drivers then, every one of which gives you something unique...Read More