The Mercedes-Benz A-Class one of the most popular cars in the UK. You’ll probably have worked that out yourself based on just how many of them you see, but a quick scan of the sales figures shows that the littlest Mercedes is a regular in the Top 10 best sellers list, up there with the likes of the Ford Fiesta, Volkswagen Golf and Nissan Qashqai.

It’s fair to say that things didn’t start too well for the A-Class though. The 1997 original – a tall, wedge shaped MPV-style hatchback with loads of interior space – suffered a PR disaster when it literally toppled over during a quick slalom run called the ‘moose test’. Fast forward to today and this A-Class, the fourth, is far more conventional, less spacious but definitely more difficult to turn upside down. It also has one of the best cabins in the business.

The outgoing A-Class, released in 2013, increased in popularity with age, culminating in its last full year being its most successful. A rare achievement. That was in no small part due to its looks, which most would agree were both striking and easy on the eye – a difficult balancing act. That’s why Mercedes didn’t mess with the styling of this version too much, ostensibly limiting changes to the implementation of a sleeker front end called, for some reason, “predator face”. It remains a lovely looking thing. 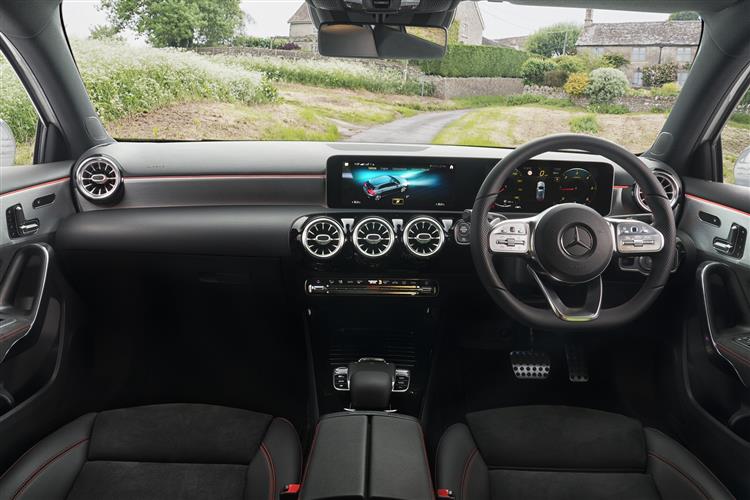 The interior is where the magic has really happened, though. The twin-screen panorama that makes up the instrumentation and infotainment is genuinely impressive, and it really has moved the game forward for family hatchbacks. It’s a high-tech, high quality place to sit. The cabin lighting in particular is gorgeous and the functionality of the screens it top rate. The A-Class doesn’t feel like a ‘budget’ Mercedes-Benz in any way.

Just how high tech your A-Class feels is determinate upon spec. If you’ve ever Googled ‘Mercedes A-Class interior’ you’ll be greeted by images of A-Class cabins furnished with the full panoramic 10.25-inch twin screen displays. In actual fact, all models come with a pair of seven-inchers as standard and, frankly, they don’t look great because they’re housed in a huge slab of shiny plastic that was clearly designed for the bigger stuff. They work the same, but in context they look like Game Boy screens. To get the big fellas you need to make sure your A-Class has an Executive Pack at least, and to get that you need a Sport or an AMG Line car.

Of the three German ‘premium’ hatchbacks, the A-Class is the one that feels least connected to the road, that feels built more for pootling about town than enjoying a B-road. For most buyers that will work just fine – it’ll be a preference, most likely – but both the Audi A3 and BMW 1 Series are more ‘fun to drive’ than this is, if that’s what you want your hatchback to be. 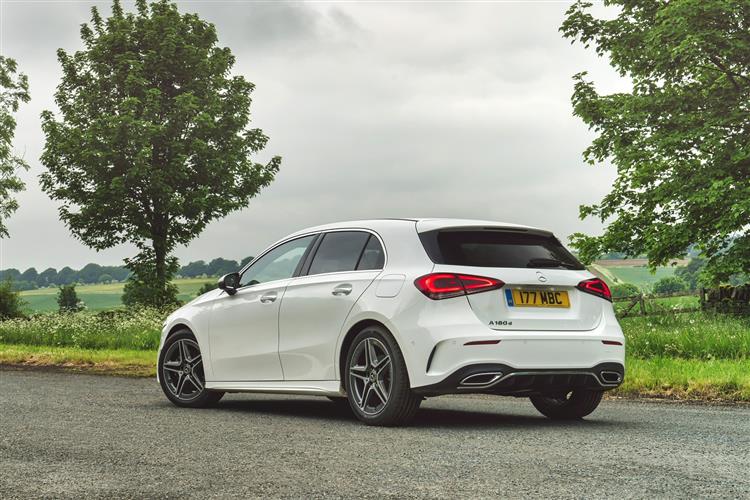 The A-Class is, in most ways, business class in the way it goes about its business. The steering is light, the refinement is generally executive car standard, near enough, and the controls are all nicely intuitive. It’s a car that evokes calmness, and is at its best at both ends of the speed spectrum.

In 30mph zones the engines are nothing more than ambient background noise, including the 2.0-litre diesel in the A180d, A200d and A220d, while the gearchanges from the seven-speed twin-clutch auto are as smooth as Michelin starred mashed potato. At motorway speed things feel largely the same. The ride quality is yet more Michelin mash and there’s very little wind or road noise. Again, this doesn’t feel like a car built to be engaging – although the chassis is fundamentally good, quick and predictable in the way it changes direction – but rather a car to be good at getting you to work and back in fuss-free (and stylish) fashion.

The base petrol engine is a big part of what makes the A-Class so impressive. It’s a 1.3-litre four-cylinder turbo petrol engine co-developed with Renault and also found, believe it or not, in the Dacia Duster. But don’t assume there’s any Romanian budget car vibe about the A-Class…not that there’s anything wrong with a Dacia, of course, but they’re built for a different market.

The 1.3 can sound a little flat when pressed, and the auto gearbox can be a little hesitant to shift down if you really want a speed boost for overtaking, but it’s feels every bit the refined, capable engine, and much more grown up than it should be given its small cylinder capacity. As ever, choose the 2.0-litre diesel if you’re doing bigger mileages, which is predictably harsh when cold or at lower speed, but settles into surprisingly muted smoothness at 70mph.

Also as ever, be aware that while selecting an AMG Line car will make your wheels and interior a little fancier, it will also make your suspension sportier, which will in turn make the ride quality firmer. Never uncomfortably firm, but peak A-Class comfort really does come on smaller wheels.

The A-Class is no longer the most practical family hatchback on the market, as it was during the first couple of MPV-shaped generations, but Mercedes has paid attention to making the boot space flexible, at least. Plus there’s always the B-Class, the GLA or the GLB to consider if you really want maximum practicality from an A-Class based package, too.

A slightly longer wheelbase than the previous car’s naturally means it’s a little more spacious in the back, but don’t expect three adults to sit on the rear bench with space to spare. It’s about standard for a family hatchback, on par with a Volkswagen Golf, though the boot is a little smaller than that car’s for reference: 370 litres, compared to 380 in the VW. The rear bench splits three ways as standard though, and the boot has a twin-floor. Up front there’s the usual melange of storage spaces, and, as a nice aside, the cover of the centre console box – a fairly deep box it is too, including USB ports – is damped, which is highly unusual.

Not least because of the screen discussion earlier, we’d suggest that a Sport model with an Executive pack is really where you want to be at a minimum, because it also comes with proper smartphone mirroring, wireless phone charging and fancy stuff like self-parking. As in it’ll reverse parallel park itself. Nice. But an SE car will service you as a perfectly reasonable runabout. It’s got more than enough stuff including navigation, a reversing camera, 16-inch alloy wheels and safety features like emergency braking assist and automatic lane keeping. The A-Class is a five-star rated car from Euro NCAP.

Fuel economy is very good across the board, with the basic 136hp version of the 1.3-litre petrol, badged A180, returning a 47.9mpg WLTP average rating with 134g/km CO2. The 163hp version in the A200 with an automatic gearbox – the best pound-for-pound version of the range, in our view – drops only a little to 47.1mpg and 135g/km. The diesels will all return economy in the low-50s in reality, while even the quickest ‘standard’ A-Class, the A250 with a 2.0-litre turbo petrol, manages to muster a 41.5mpg economy rating. That’s ‘standard’ because there are, of course, a couple of AMG-tuned high-performance models in the A-Class range, but they merit their own discussion.

The first A-Class’s moose-based PR disaster threatened to overshadow the launch of a car that was groundbreaking in a few ways, but Mercedes fixed the issue with an electronic stability control update and the car went on to sell very well. Its wedge-like profile didn’t endow it with head-turning looks, but it was a true safety pioneer (ironically enough) thanks to the so-called “sandwich” platform. A double layer floor pan meant that in the event of a front end collision, the engine would slide beneath the upper level and away from occupants’ legs. Clever stuff. It All bar the driver’s chair could be removed completely, leaving a virtually empty load space akin to a small van.

The cabin is futuristic but fussy with it, although it feels even more solid than the A-Class’s and the Audi A3 is more fun to drive.

The 1 Series is still the benchmark for handling in the class, despite the move to front-wheel drive. Not the prettiest though.

The SUV version of the A-Class has the same basic cabin architecture but the GLA offers a lot more space and improved visibility.

"It feels as special and cool as a Mercedes should do...The A-Class doesn’t feel like a ‘budget’ Mercedes-Benz in any way."

Three Things To Remember About The Mercedes A-Class:

Best Cars For MPG
Its all of the best cars for Mile Per Gallon...Read More
10 Best Cars For New Drivers
Here are our 10 favourite cars for news drivers then, every one of which gives you something unique...Read More
The Best Cars For Motorway Driving
In a new car market increasingly dominated by SUVs, it’s tempting to wonder whether there’s really still a place for the classic estate body shape. Here, we’re going to guide you through your best options.Read More
This website stores cookies on your computer. These cookies will allow us to remember you and your preferences.
We use this information to improve your browsing experience.
To find out more, please read our
cookie policy.