The MG ZS EV is very possibly the best value electric car on the market today. Not the cheapest, nor the most advanced, nor the quickest, nor the most comfortable, nor most prestigious, nor most stylish… hang on, weren’t we supposed to be saying this is good?

Point is, without being the best modern electric car in any one area, the MG ZS EV is a crossover EV that does everything very well and for a very attractive price. And that will make it a very attractive lease for a lot of people. 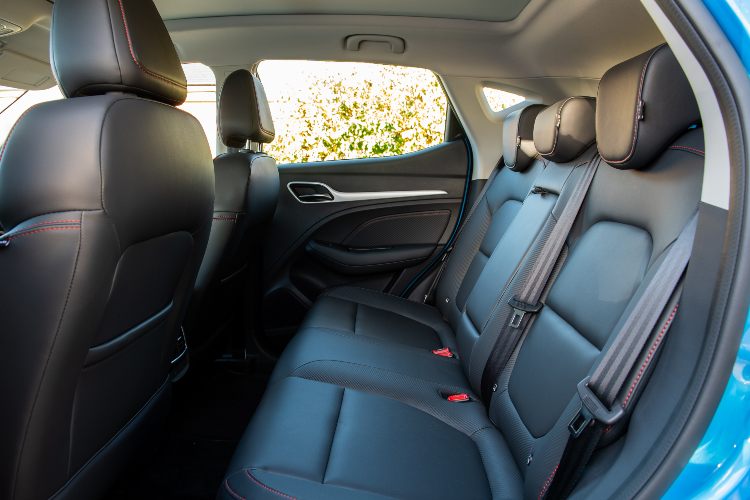 Mainly, it’s a very spacious, fairly no frills and eminently ‘normal’ electric car that’s very easy to live with on account of getting the basics right. See, today’s MG – now owned by Chinese company SAIC, you may know – has very little in common with the MG of old, which was all about the classic British sports car. Instead, MG now occupies the space that Skoda used to, before it went upmarket and started out-Volkswagening Volkswagen. MG is a brand whose emphasis is firmly on good, honest value.

In the ZS EV, that brand positioning results in a car with plenty of space for 5, a boot that’s large (and which doesn’t lose any space compared to the non-electric ZS), and whose price is on par with a much smaller electric car; in essence, you’re looking at the space and flexibility of a Hyundai Kona, but for the price of a Vauxhall Corsa-E. The lease prices for an MG ZS EV are surprisingly low. 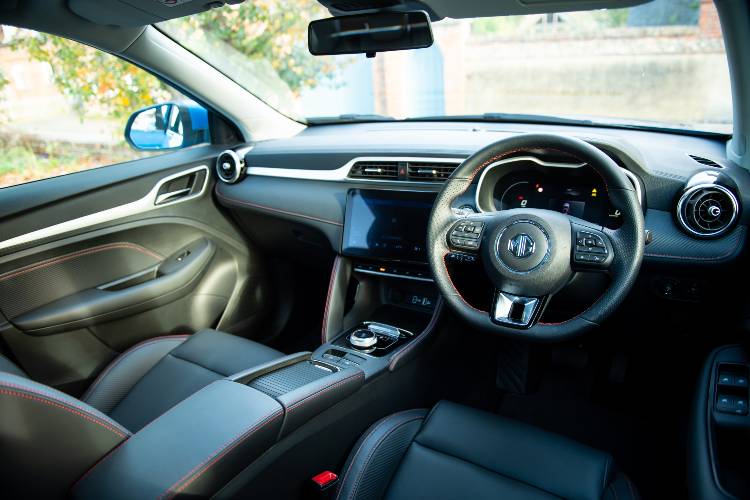 As much as the basics of the ZS EV are spot on – there’s soft-touch plastic on the dash top, it’s well equipped and the infotainment is relatively easy to fathom – you will feel like costs have been cut in certain places. It just feels a little… basic. The depth of quality that you feel in a Toyota or a Kia or a Hyundai doesn’t seem to be quite there. The dials and buttons don’t have quite the satisfying click you’d get on those cars, and the software behind the infotainment screen feels slightly underdeveloped.

Having said that, button-feel and software preferences are abstract concepts, to a point, and probably less important than the practicality and low running costs that the MG ZS EV serves up. 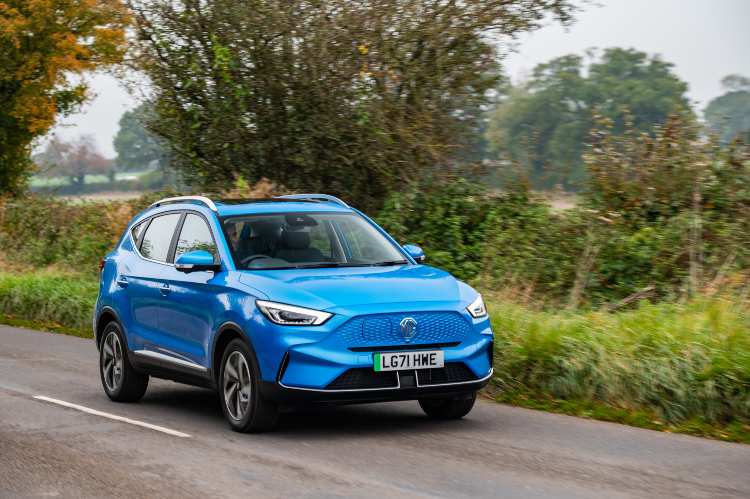 Pleasingly normal. The only distinguishing feature of a ZS EV, as compared to an internal combustion model, is the rotary gear selector in the centre console. It doesn’t quite elevate the ZS into ‘woah, this is futuristic’ territory in the same way that, say, a Hyundai Kona Electric’s button selector set-up does – not at all, in fact – but again, that will be a strength for some. That sense of normality. Of ease-of-use.

Once you’ve turned said knob to select D, that sense of normal, unfussy progress continues, except because it’s an electric motor doing the work, rather than exploding fuel, there’s an almost total lack of noise and inertia. Therefore, you instantly get a hit of both refinement and responsiveness that the petrol versions just can’t compete with. Therefore, the electric MG ZS is the best MG ZS.

You’ll probably have gathered that the ‘cost-effective’ vibe we’ve alluded to means that this isn’t the most cutting-edge electric drivetrain on the market, and that’s true. That said, in 2021 it received a significant facelift and tech update, the latter of which replaced the old (and rather small) 44.5kWh battery pack with a much more useful 72.6kWh (68.3kWh usable) item, which boosted the 1-shot driving range from 163 to 273 miles overall. Power also went up marginally, from 143- to 156hp, but torque dropped from 353Nm previously to a still-healthy 280Nm now.

However, that means the MG ZS is still good for 0-62mph in 8.4 seconds and a top speed of 108mph, and there’s also a short-range model with a 51kWh battery with up to 198 miles possible on a single charge if you don’t fancy the long-range variant. Nevertheless, when compared to rivals like the Hyundai Kona Electric (64kWh, 300 miles) and the Volkswagen ID.4 (77kWh, 322 miles), the MG ZS looks like it is a step behind them but, once more, this is a heck of a lot cheaper to lease than both.

It’s also fair to say that the ZS loses out to those things in overall refinement terms too. It drives fine, it’s mostly very nice in fact, but it can never quite shake the sense that it’s a low-cost car. ‘Shake’ being the operative word here. The chassis kind of has a fundamentally… not very stiff feel. What that does is make it soft and kind of comfy, but also a bit unsettled also.

Now, obviously, that’s better than it being all firm, all SPORTY, but also it feels a little old-school. A bit like it’s already got 100,000 miles on the clock. The rolling refinement tends to degrade with speed too, as in, the ride quality becomes quite unsettled and wind noise reasonably obtrusive once you get to motorway velocity, more so than you’d expect from a mid-level family crossover – a Nissan Qashqai, for example. 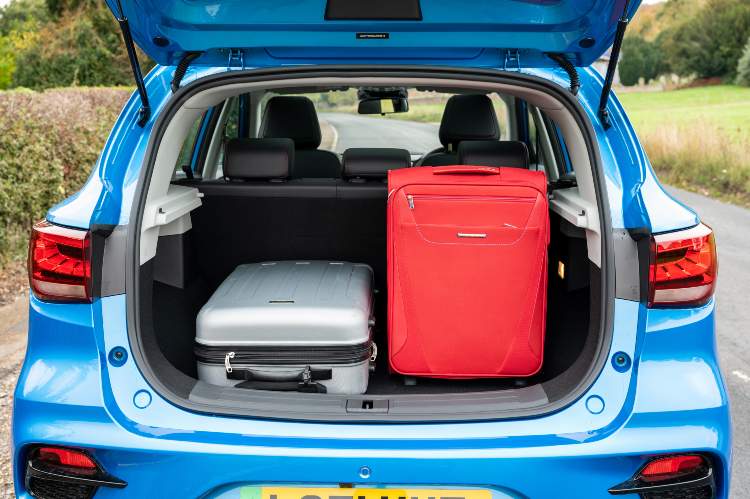 You might remember that earlier we said ‘you’re looking at the space and flexibility of a Hyundai Kona but for the price of a Vauxhall Corsa-E’ of the ZS EV? No need to check back, we definitely did. Anyways, to throw you some context on that, the MG here has a 470-litre boot, the Kona Electric has a 385-litre one and the Corsa-E 309 litres of empty space behind the rear bench.

So you see, plenty of space here. It also has a sizeable cabin – the Kona is a mere 2cm longer between the wheels than the MG, which is a good measure of rear legroom – and it also has a decent amount of oddment space up front. Relatively large glovebox, bit of storage in a box between the front seats, covered cupholders and wide door bins. Usual stuff. 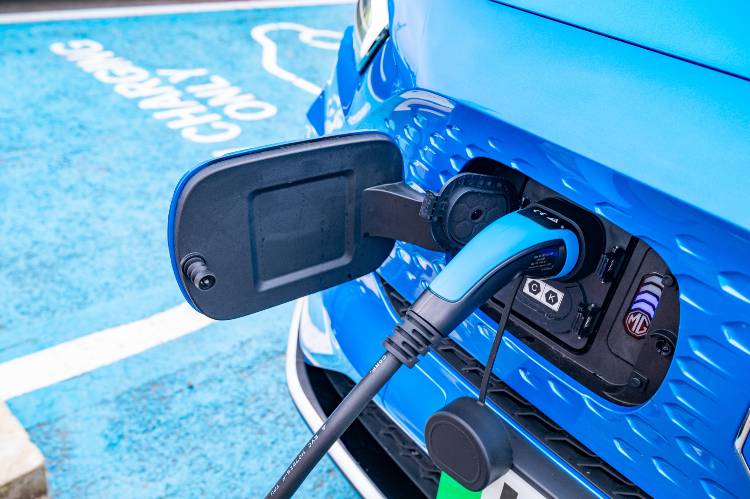 Not a whole lot, as we keep saying. Lease costs are very reasonable – pretty much on par with a standard family hatchback – but of course there’s the fact that your ‘fuel’ costs are extremely low. As is your company-car liability if you’re a business user. You’re unlikely to find a vehicle with this much space that’s this cost-effective to lease and run.

And although it’s not furnished with the most cutting-edge charging capability, the ZS EV does come as standard with a CCS Combo 2 setup bestowing it with a maximum 76kW charging speed. It means that if you can get to a 50kW charging point, it’ll attain 80% battery from about empty in around an hour. From a 7kW home wallbox, it’ll take 10-and-a-bit hours to get to full. And that’s probably what you’re going to do every night, right? No issue.

The trim levels are nice and easy to understand, too. Just the 2 of them: Excite and Exclusive. You probably only need the first of those, given it includes 17-inch alloy wheels, air conditioning, touchscreen navigation, Apple CarPlay, Android Auto and rear parking sensors. If you need bum warmers, leather-style seats and a panoramic sunroof, Exclusive is the trim for you. 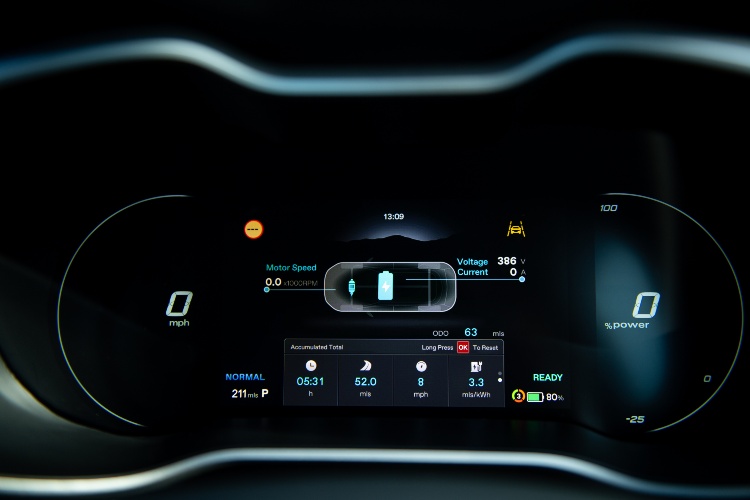 Despite not having the absolute largest battery on the market, nor the most sophisticated drivetrain, the ZS EV does have a couple of useful tricks though, like different modes for strength of energy recapture, so you can do that ‘one-pedal driving’ thing where you lift off the accelerator and the car quite aggressively slows down, recapturing heat energy for the battery as it does so. It’s labelled ‘KERS’ on the button that controls it, too. As in ‘Kinetic Energy Recovery System’. As in the name that Formula One cars use for a similar system. Something to impress your pals with, that.

Higher interior quality than the MG, with a longer range and better high-speed refinement. But it costs more, so…

A different class of car, sure, but if you don’t need quite the MG’s space then the Zoe is easier to park. Still big enough for 4, too.

Probably the class leader in this electric family crossover segment and with a relatively huge range, but you’ll of course pay significantly more for the privilege.

Fiat 500 Review
The Fiat 500 feels like it's been around forever, but does it still deliver? Mark Nichol finds out.Read Review
Fiat 500 Vs Vauxhall Corsa
Looking for a small car but can't choose between the Fiat 500 and Vauxhall Corsa? We put the two head-to-head...Read More
Car Body Types: The Ultimate Guide
Today we have a wide variety of car styles, but what do they all mean and which is best for you?Read Guide
10 Best Cars For New Drivers
Here are our 10 favourite cars for news drivers then, every one of which gives you something unique...Read More