Peugeot is among those car companies that has decided to make EVs part of its mainstream ranges rather than create separate models or brands. This is amply demonstrated with the 2008 and e-2008. Other than the little badge to denote one runs on electricity alone, you’d hardly tell them apart from the outside. A less than class best EV range for the e-2008 means the petrol model still has a lot to tempt drivers with. The boldly styled Peugeot 2008 and its e-2008 EV sibling inhabit one of the hardest classes there is to crack. Compact SUVs are everywhere from almost all manufacturers, so lease customers have their pick of everything from the sensible Skoda Kamiq and Volkswagen T-Roc, through the sporty Ford Puma and on to the plushness of the Audi Q2 and BMW X1. Whatever you want, there’s a compact SUV to suit. 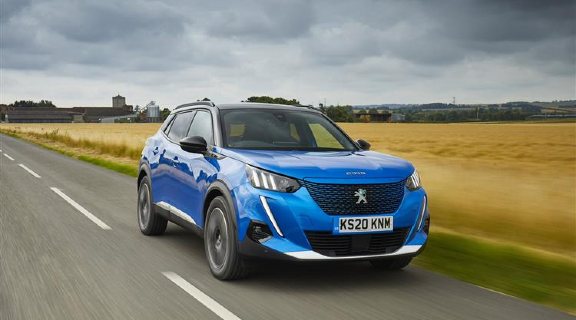 The 2008 also has some competition from inside its own ranks in the shape of the 208 supermini. You overlook this small hatch at your peril as it’s one of the very best there is, and the e-208 is the sweet spot in the Peugeot supermini range, which tells us this French firm has got their heads round EV tech and what drivers want from it.

The upshot is the 2008 and e-2008 have their work cut out to tempt drivers, so let’s see which of these Peugeot’s works for you...

In a crowded market place it can be hard to stand out, but Peugeot has made a sound job of this with the 2008. The petrol and diesel models and the EV all share the same overall looks and style, so from the outside it’s down to the details to tell the electric car from the others. At the front, there’s a body-coloured chequered grille, while the famous Peugeot Lion badge on this car has a special paint treatment that changes colour depending on which angle you look at it from. Beyond that, there are ‘e’ badges on the front side panel and tailgate, and that’s yer lot.

Under the skin, the e-2008 uses Peugeot’s e-Common Platform that is also used for the e-208, as well as the Vauxhall Corsa-e. The batteries are grouped in two parts, with one under the rear passenger bench and the other snuggled beneath the front seats. A 50kWh 136hp electric motor under the bonnet drives the front wheels through a single-speed transmission, so it drives in exactly the same way as a petrol car with an automatic gearbox.

The e-2008 has three driving modes, similar to those of the 2008, so you get Normal, Sport and Eco. However, the EV also comes with two braking modes, so you can choose from the default Moderate setting or Increased that gives more regenerative braking and 1-pedal driving as you can modulate speed and deceleration all from the throttle pedal.

As mentioned above, the Peugeot e-2008 has two braking modes and in the Increased setting, you can drive using just the accelerator pedal for much of your journey. This works best in town where stop-start driving is the norm. With a little familiarity, you can build speed and scrub it off by using the pedal more like you would with an electric train set toy. It makes the brake pedal all but redundant until you need to hold the car at a standstill.

For those who don’t want this or find it too strange, the standard Moderate brake setting lets you drive the e-2008 in just the same way as the petrol with its 8-speed automatic gearbox. At higher speeds, we prefer the e-2008 in the Moderate mode as the braking effort can induce a bit of a jittery feel to progress.

Another edgy side to the e-2008 can be the ride quality, especially if you choose the sportier GT trim. We’d avoid this as the suspension and wheel combination in this version simply makes the Peugeot too firm for true day-to-day comfort. Other trim levels of e-2008 are better in this area, but not as good as the petrol and diesel models as the EV has to deal with the weight of its battery pack. To keep the e-2008 from lolling around too much, Peugeot has had to firm up the suspension, which is fine for handling fun but less pleasant when you’re behind schedule on the school run.

On a positive note, the e-2008 is very refined at all speeds and noticeably quieter on the motorway than an MG ZS or Volkswagen ID.3. Both petrol and electric 2008s have quick-acting steering, which is accentuated by their small steering wheels, though this doesn’t make either feel flighty at motorway pace.

Peugeot has designed the 2008 and e-2008 alongside each other from the get-go. The result of this is anyone choosing the EV does not have to accept any compromises in cabin or boot space. This means there are no discernable differences and even tall drivers will find plenty of room to get comfortable in either 2008. 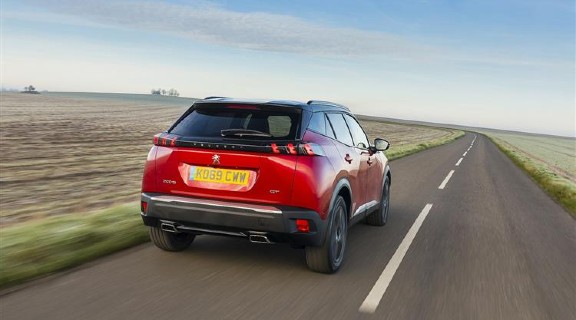 Peugeot’s i-Cockpit design employs a deliberately small steering wheel set lower down than you’ll find in almost any other compact SUV. It can feel a little odd at first, but it all makes sense when you find the main instrument binnacle is clearly visible above the wheel. Depending on how you like to sit in the car, the steering wheel can obscure the lower part of the dash display.

As we’ve gone for both cars here in Allure Premium trim, you will also have the 3D dash display. This is very much down to personal taste whether you’ll like it or not, but some might  feel it makes the numbers on the screen a little trickier to read. That’s not the case with the 7-inch infotainment screen, but we wish Peugeot had chosen rotary dials for the heating controls like the ones found in the Citroen C4 and e-C4.

Jump in the back of the 2008 and there’s more space than in a Volkswagen ID.3 or Mazda MX-30, but a Kia Niro or e-Niro is streets ahead for head and leg room. Unlike some EVs, the e-2008 doesn’t provide any extra luggage capacity under the front bonnet, but the boot offers the same 434-litre space as the petrol 2008 with the rear seats up. Drop the 60/40 split and tip back seats and you have up to 1467-litres in both versions of the Peugeot.

The Peugeot e-2008 has considerable appeal for company car drivers thanks to its Benefit in Kind rating at 1% compared to the 1.2 Puretech Allure Premium with the EAT 8-speed automatic set at 30%. As a result, a 20% tax payer will shell out a mere £70 to the Inland Revenue in the current tax year, while the petrol-driving 2008 user will pay £1430.

There’s more good news for the e-2008 as it has free road tax in the first year and beyond, while the petrol 2008 will see you spend £220 on Vehicle Excise Duty for the initial 12 months of ownership. However, the petrol car is cheaper to insure thanks to its group 18 rating compared to the e-2008’s group 25 bracket.

Where the e-2008 might come up short, literally and figuratively, is its battery range. The official combined total is 206 miles, which means a real-world 160 miles from full to flat, assuming a mix of roads; unlike petrol or diesel cars, EVs are at the most efficient around town at low speeds, draining their batteries more quickly at motorway velocity. For many business users, the e-2008’s range might be problematic when a Kia e-Niro offers 250 miles between charges. Pick the 2008 1.2 Puretech 130 that we’ve chosen here and its 48.3mpg combined consumption and 44-litre tank give a potential range of a shade over 450 miles. 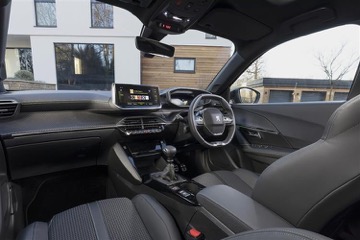 A Peugeot e-2008 should slot into most drivers’ lives very easily. It comes with a Mode 3, Type 2 charging cable as standard so you can charge the battery from zero to 100% in 7.5 hours from a 7kW charge point. The French firm also gives e-2008 drivers access to some free charging points with a free subscription for a limited period. Using a 50kw public charger, you can go from 20- to 80% charged in around 40 minutes. In common with most EVs, a smartphone app lets you interact with the e-2008. You can remotely set timers for when to charge using lower energy tariffs and pre-condition the cabin temperature while still plugged into a charger. The app also lets you check battery level and range, and there’s an e-Coaching mode with consumption logs and statistics to encourage drivers to be more efficient.

For more on cars take a look at our wide range of helpful guides and reviews and, while you're here – why not browse our car leasing deals.