The Porsche Taycan is the first all-electric vehicle (EV) from the German sports-car manufacturer and it’s a prestige saloon that’s not only fast in a straight line and great in the corners, but also easy on the environment. Targeted squarely at the Tesla Model S, the Porsche has already spawned the Taycan Cross Turismo, an off-roading, lifestyle estate derivative, and even the Audi e-tron GT, which is the same car underneath as the regular Taycan – only in a slightly chunkier, more angular frock. See how the Taycan compares to the e-tron in detail in our dedicated article.

There are 4 models of Taycan to go at, starting with the single-motor, rear-wheel-drive Taycan, and rising all the way to the outrageous Turbo and Turbo S models, with either 680- or 761hp. But a test of the 4th model in the range, the 4S, suggests this might very well be the version to go for amongst its peers. This is a twin-motor car, hence the ‘4’ in its name which denotes it is all-wheel drive, and with the larger battery pack fitted then it has a good, usable real-world driving range. 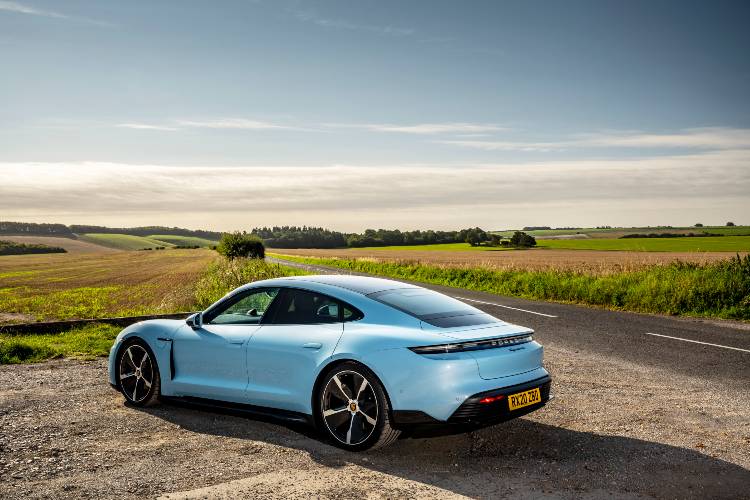 Like any Porsche Taycan, the interior is fantastic. It is dominated by at least 3 large digital displays, the central item being a more traditional infotainment touchscreen in the form of the 10.9-inch Porsche Communication Management system. Below this is an 8.4-inch haptic pad for the climate control systems, while the masterpiece is the 16.8-inch Curved Display which serves as the Taycan’s instrument cluster.

Graphically, it mimics the dials in other, more conventional models of Porsche, but as it has no cowl, is completely digital and even has various car-settings function switches down the sides of it, the Curved Display gives the electric saloon a completely different ambience to any other car in the manufacturer’s range. And you can even optionally add another 10.9-inch infotainment screen ahead of the front-seat passenger, if you fancy it, and a further 5.9-inch touchscreen in the back with the extra-cost 4-zone climate control. 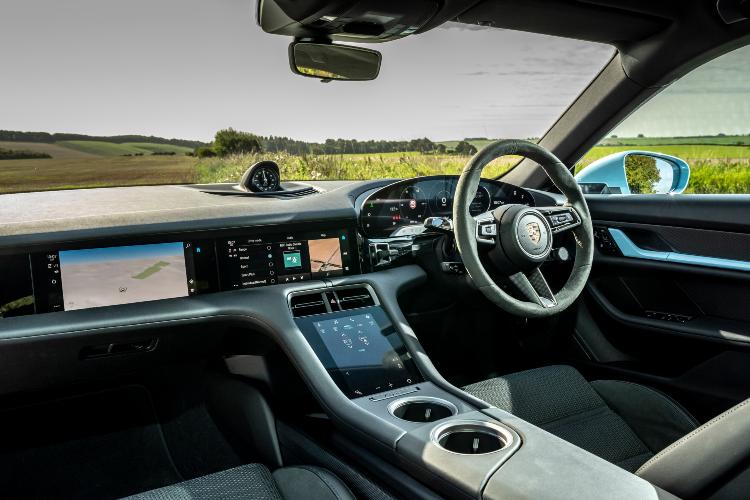 Not only does the Taycan’s interior look suitably futuristic and technologically advanced, but it’s beautifully made and appointed throughout – and if you’re a vegan, there’s an option which removes all the cow-hide leather from the cabin and replaces it with man-made stuff.

Meanwhile, on the outside, the Taycan is brilliant. It’s long, low and wide, which gives it real presence, and while there are enough styling cues about it that mean you could prise off all the Porsche badges and yet people would still know which company it was from, by contrast it doesn’t just look like a slightly smoothed-off Panamera – Porsche’s other sports saloon. The Taycan has a sleek frontal area with squarer headlights than most other Porsches, while its side panels and rear are fuss-free and shorn of needless detailing. In short, it simultaneously looks exactly like how you’d imagine a Porsche EV would look, and then it also cuts its own aesthetic path among the other vehicles in the company’s portfolio. 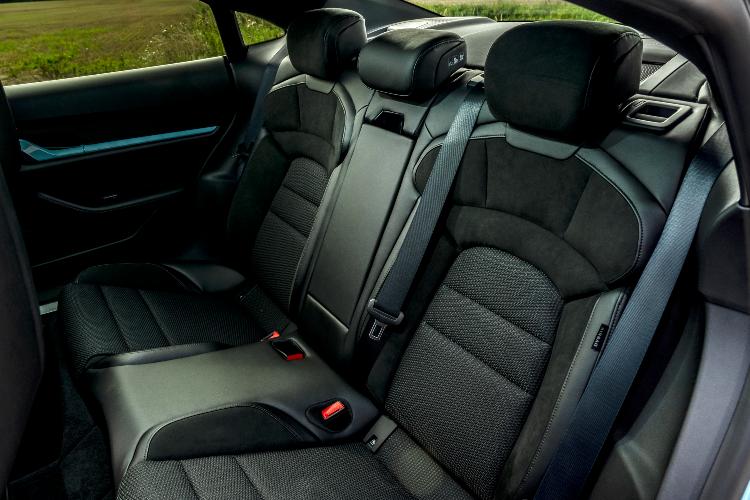 There is no ‘true’ 5-seater configuration for the Taycan’s interior. Instead, it has what is called a ‘4+1’ seating arrangement, with 2 more accommodating outer chairs in the 2nd row framing an occasional-use centre seat that’s considerably smaller and higher-set than the others. Not only that, but this arrangement isn’t even standard-fit – you need to pay extra to have it equipped on the car, otherwise you get 4 seatbelts only. 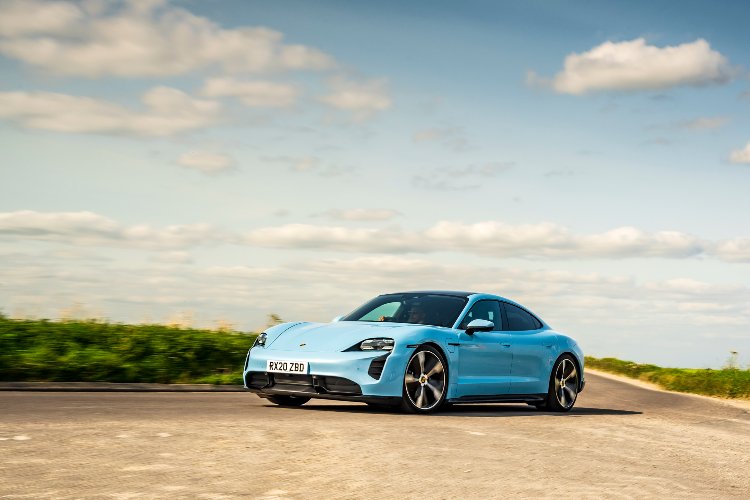 This might be a Porsche with no engine, but the company has worked incredibly hard to ensure it offers its driver the same sensations and rewards as any other of its sporty models. In all fairness, what Porsche has served up here has smashed the intended design target into smithereens: this is the best-driving EV in the world right now, bar none.

The other three models in the Taycan range are all thoroughly exceptional too, in particular the Turbo and Turbo S if you demand astonishing straight-line speed as part of your repertoire, but realistically the 4S has all the performance you could possibly need. Its twin electric motors make up to 571hp and 650Nm, enough to propel the car from 0-62mph in 4 seconds exactly. However, it’s the typical seamless urgency of an EV which makes the 4S seem even faster than it is – there’s no lag from any turbos attached to an engine, because there’s no engine in the first place, and the reduction-gear transmissions (yes, it has 2 gearboxes) give the impression that 1 ratio is pulling the car all the way from rest to its top speed. This is impressive, because the Taycan 4S actually has a 2-speed transmission on the rear axle and only very occasionally can you sense that gearbox at the back transitioning from one speed to the next. 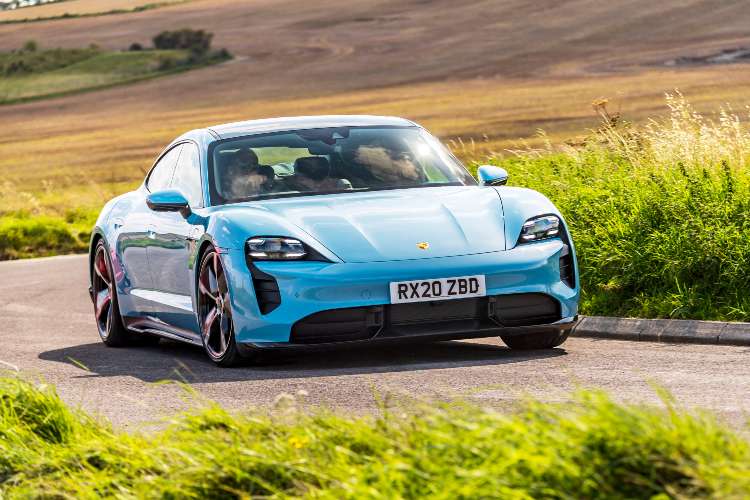 At 2220kg, the Taycan 4S is not what you would call a light car but it’s still mighty impressive and enjoyable on quieter, twisty roads. It comes with twin-axle adaptive air suspension and the Porsche Active Suspension Management (PASM) adjustable damping, which means it has epic body control even when you’re throwing it around like a hot hatchback. Porsche steering is amongst the best in the business and the Taycan is no exception to this rule, with about the only minor complaint regarding the way it performs and handles being that it doesn’t have any drivetrain noise to entertain its occupants. You can option up Porsche Electric Sport Sound which rectifies this somewhat, by amplifying the whoop of the 2 electric motors into a rich, thick, buzzing sci-fi noise in the passenger compartment – some people like this highly distinctive feature, others are not so keen.

Beyond its abilities in the corners, the Taycan is also remarkably refined, not just through the lack of an internal combustion engine but also because the Taycan’s slippery shape has been designed to cut through the air with the minimal of disturbance. This allows the car to travel further on its battery pack than it otherwise might do with more upright body styling, yet it also has the bonus effect of making the Taycan quieter at motorway speeds as there’s less noise around the passenger compartment caused by disrupted airflow. And as the air suspension which earlier proved so good at keeping control of the body is equally adept at smoothing out the worst road surfaces, that means travelling along at motorway speeds in the Taycan 4S is a profoundly relaxing, peaceful affair – even on optional 20-inch wheels with low-profile tyres. 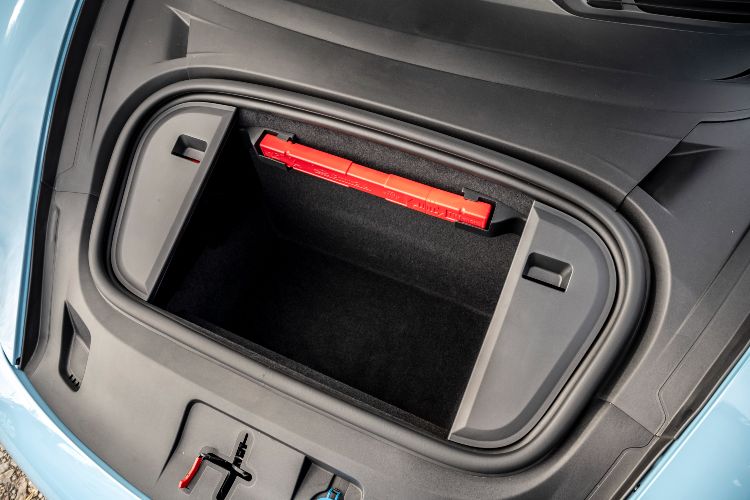 The interior is very spacious and something called a ‘foot garage’ means that rear-seat passengers in the outer 2 chairs have comfortable seating positions. This is because Porsche has made a space in the battery pack that is mounted in the floor, which makes more room for the feet of adults sitting in the back of the car. Furthermore, both this 4S and the single-motor entry model have larger boots than the Turbo and Turbo S cars, with 407 litres available at the rear and another 87 litres in a square storage compartment underneath the bonnet.

In terms of storage, the interior is pretty good, with decent door bins and a couple of large cupholders in the centre tunnel, but the Taycan is not designed to be a family motor first and foremost, so don’t go expecting the cabin flexibility of an MPV or SUV. The rear seats do split-fold 60/40 and there are 4 USB-C ports dotted about the interior as well, plus a pair of 12-volt sockets (1 is located in the boot). If you require a touch more cargo space and rear headroom, the Cross Turismo estate version is the one to go for. 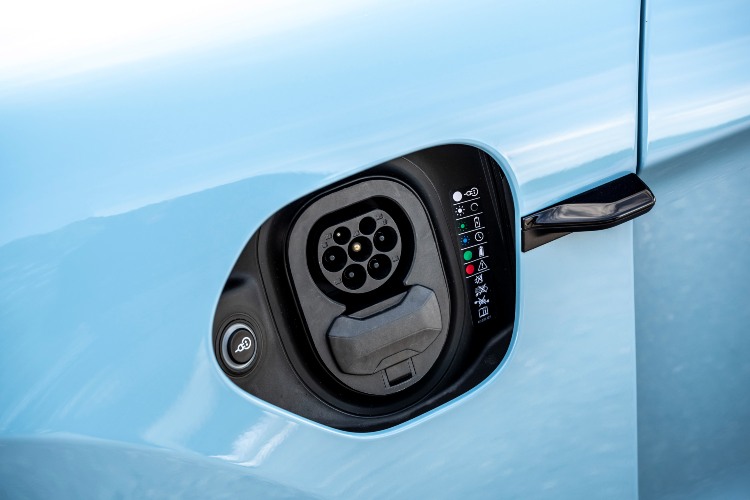 It used to be that Porsches came with barely any standard equipment at all, but despite the presence of a lengthy and costly options list for the Taycan family, all models come with a wealth of kit as standard. This 4S in particular is generously specified with the air suspension and PASM, full LED headlights including Porsche Dynamic Light System Plus, dual-zone climate control, thermally insulated glass, 8-way electrically adjustable Comfort front seats, Lane Keeping Assist, Traffic Sign Recognition, Collision and Brake Assist, cruise control with an adaptive speed limiter, front and rear ParkAssist parking sensors, keyless start, a part-leather interior, a 10-speaker, 150-watt sound system, and a powered bootlid all part of the factory spec. Bad news for Samsung smartphone owners, however – while the infotainment system onboard comes with Apple CarPlay, it does not support Android Auto.

In terms of running costs, it comes down to the price you pay for electric. It costs more to charge an EV at a rapid charging unit that it does on a domestic socket at home, and you might also have day and night tariffs at your place of residence which makes replenishing the car’s battery overnight more economical than plugging it in during the day.

Whatever you choose to do, though, it’s comforting to know that the Taycan has one of the most advanced electrical systems in the automotive world. Its 800-volt architecture means it can charge at up to 270kW on a DC connection, although you need the optional 93.4kWh Performance Battery Pack (PBP) for that lightning speed. Both the entry-level Taycan and this 4S come with the 79.2kWh Performance Battery as standard, which can be replenished at a maximum 225kW DC; the Turbo and Turbo S models are only fitted with the larger PBP from the off.

Anyway, on a 270kW connection – if you can find one – a mere 5 minutes 15 seconds will add 62.1 miles of range to the Taycan 4S with the PBP, while 5-80% of charge will require 22-and-a-half minutes. On the far more prevalent 50kW DC public chargers, 62.1 miles of range can be added in less than 30 minutes and the 5-80% hit will take around 90 minutes. Don’t ask us about home charging on a domestic 3-pin socket – that’s possible, but not the brightest idea on an EV with a battery pack this big. You’ll be better off with a properly installed wallbox, which will offer 11kW AC charging as standard or 22kW if you tick a specific option box at ordering time, meaning you should be able to plug your Taycan in before you go to bed and wake up to a full battery pack the next morning. Check out our full guide to charging for more info on the subject. 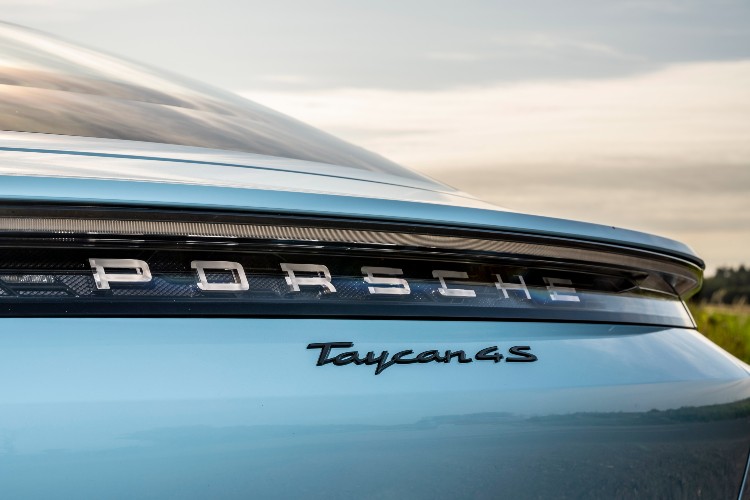 There’s a little bit of confusion as to how to pronounce this car’s name, but the most widely accepted ‘correct’ way is ‘Tie-carn’. And not ‘Taken’, like the series of Liam Neeson-fronted action films. We hope that helps.

Same car underneath as the Taycan Turbo and Turbo S, only with less power in both the Audi variants offered.

Not as overtly sporty as the Porsche, but it is dripping with technology and has incredible driving range.

The one which kicked the established manufacturers into action remains a great electric luxury car.

"The interior is fantastic, the outside has real presence and whilst it has no engine Porsche has has worked incredibly hard to ensure it offers its driver the same sensations and rewards as any other of its sporty models. his is the best-driving EV in the world right now, bar none."

Three Things To Remember About The Taycan 4S:

Car Body Types: The Ultimate Guide
Today we have a wide variety of car styles, but what do they all mean and which is best for you?Read Guide
Which Cars Are The Most Fun To Drive?
Our pick of the 10 most fun cars to drive in 2021...Read More
Electric Cars Explained
Everything you need to know about electric cars in one place.Read More