At the risk of going all Sesame Street, today’s review is brought to you by the letters E and Q. See, Smart cars are no longer just Smart cars, they’re all “Smart EQ” cars, “EQ” being Mercedes-Benz speak for anything with electric propulsion. And Mercedes-Benz being the owner of the Smart Brand. And, therefore, all Smart cars are electric vehicles these days. (If you’re wondering, EQ stands for “electric intelligence”, which somehow makes absolutely no sense and yet perfect sense at the same time.)

So, the EQ Forfour is the latest version of Smart’s 4-seat city car, powered by an 82hp electric motor drawing power from a 17.2kWh battery pack. If you know much about battery sizes then that power density number will be sounding alarm bells in your head already, and for good reason. But as you’ll soon see, all is not lost. The Smart Forfour EQ has a lot going for it…in the right circumstances. 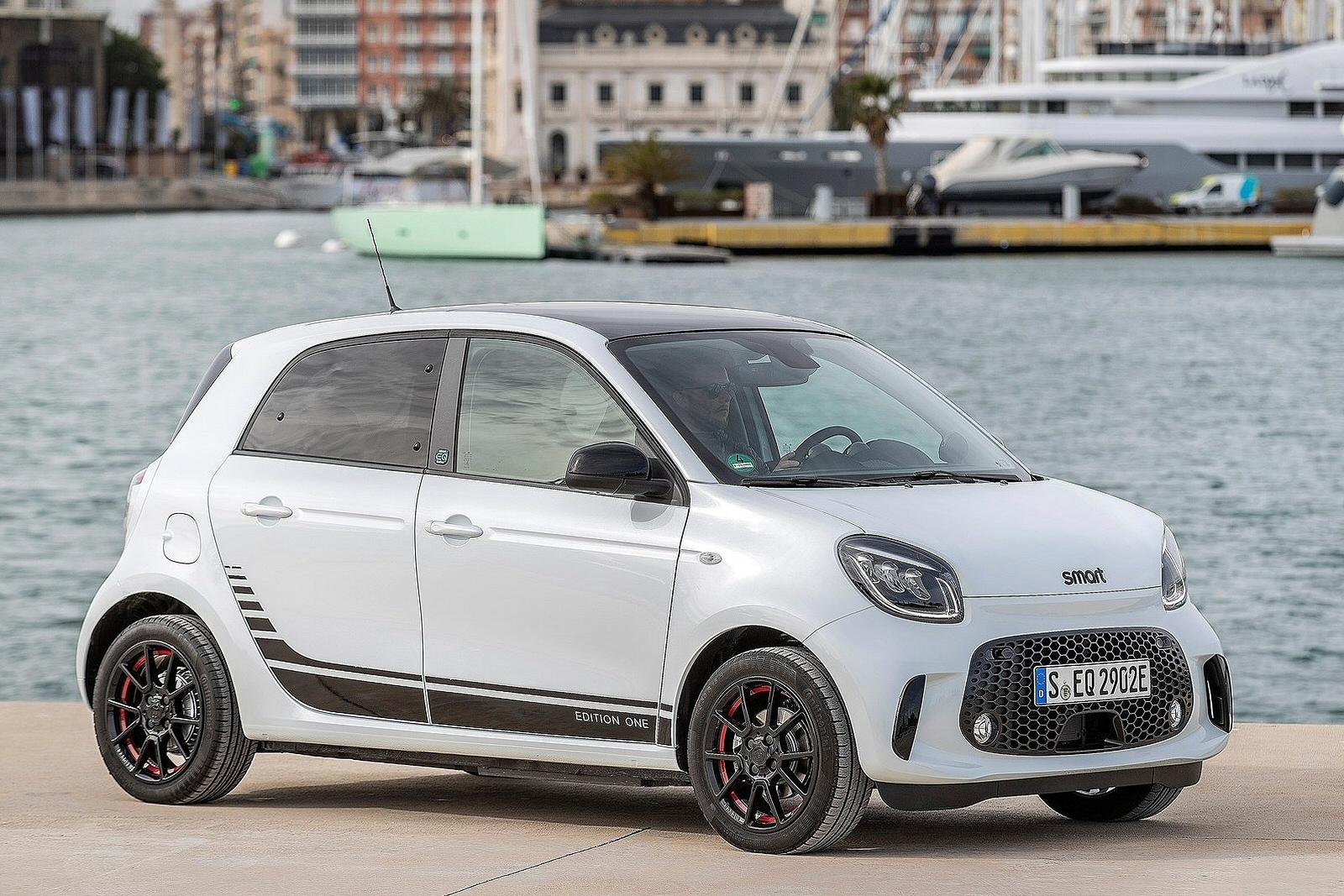 It’s absolutely tiny, significantly shorter than a Volkswagen Up, and yet its rear-motor layout means it has quite a lot of cabin space. And because there’s no engine up front, those wheels have more space to turn, meaning a very small turning circle, equating to brilliant city manoeuvrability. Add to that its charming looks, a couple of innovative practicality flourishes (which we’ll come to) and the natural turn of pace that you get with all electric cars, and the Forfour seems very reasonable.

The EQ version is better than the old petrol variants too, because the electric drivetrain fundamentally solves that car’s main issues: a dim-witted automatic gearbox and a distinct lack of pickup at anything above 30mph. This one runs out of steam a good 20mph later. 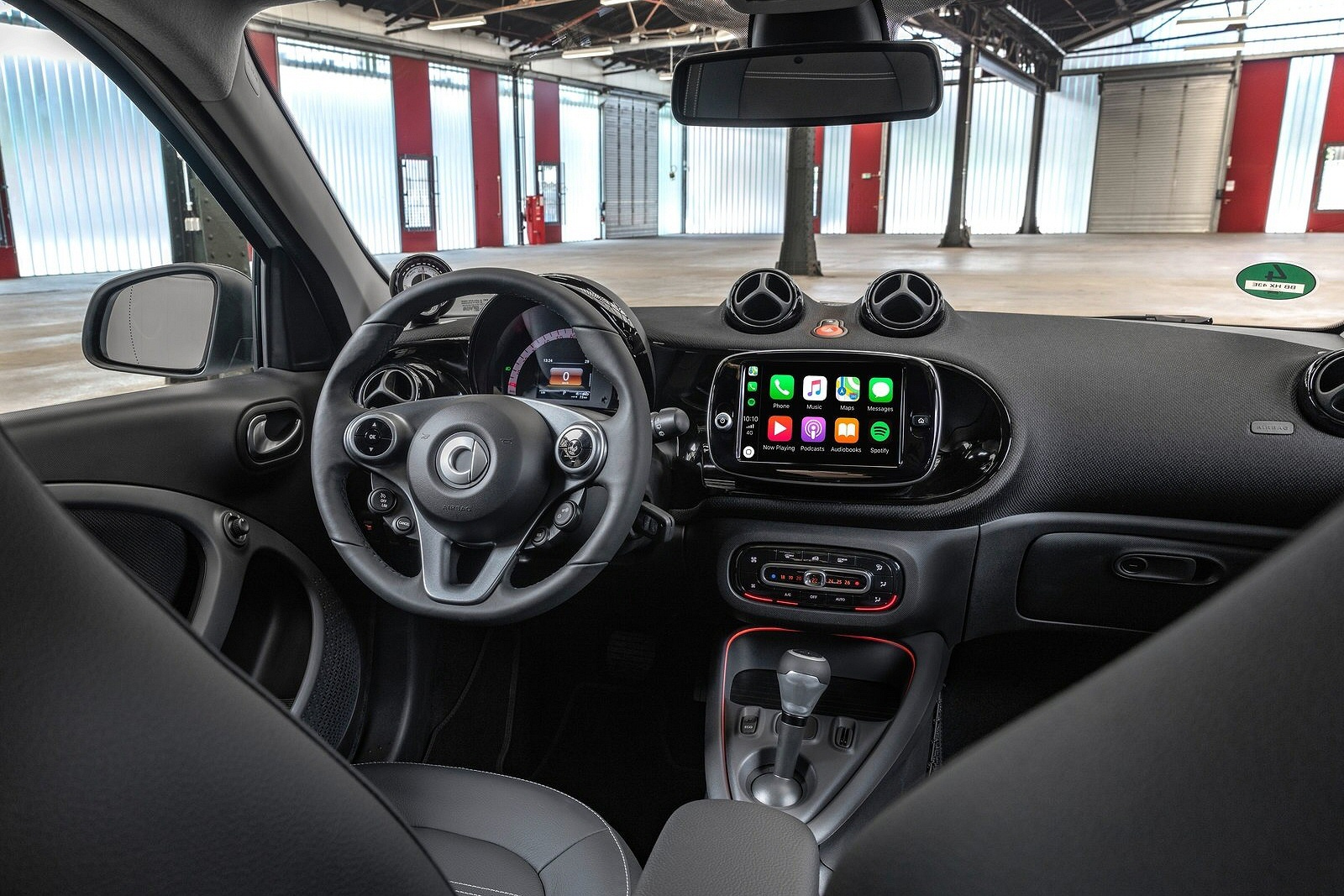 The battery. The battery is tiny by modern standards. Sure, the Forfour itself is tiny, but to give you an idea, the 17.2kWh battery compares to 32.6kWh in the MINI Electric and 35.5kWh in the Honda E; the MINI and the Honda are both criticised for having small batteries themselves. The Forfour will officially do 140 miles on a single charge, but in reality you’ll do well to exceed 100, which means you’ll really need to keep on top of your charging, and that long distance drives are a no-no. The flipside, though, is that with a battery so small, if you can find a 22kW charging station you’ll be at 80% from virtually flat in about 40 minutes. 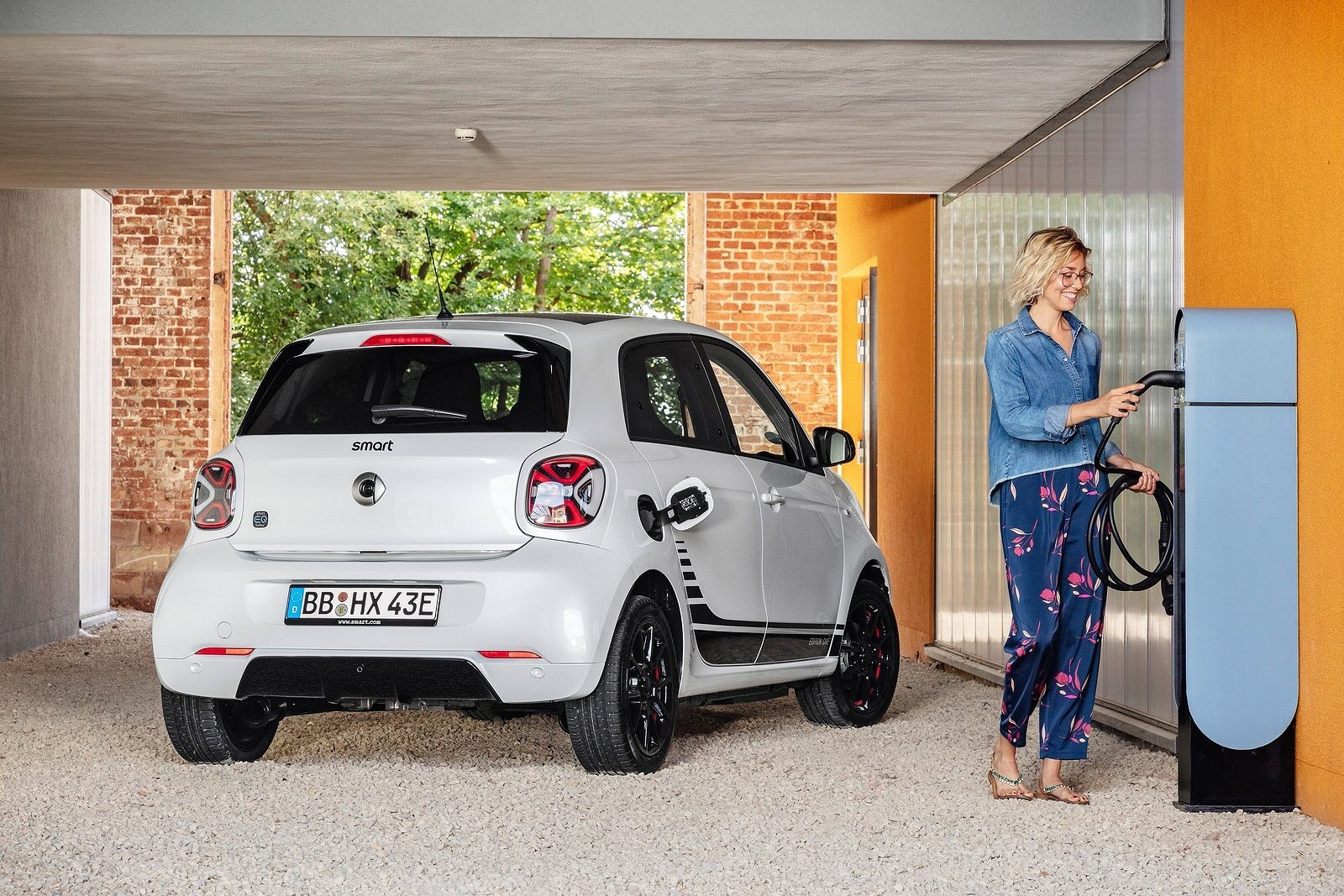 The Smart Forfour is as cheerful as it is cheap. Genuinely. It feels cool and quirky in a way that few small cars do. It also feels a bit different to drive too, even aside from the relative novelty of the whole electric thing. The first thing you’ll notice is how it steers. It has that feel of the whole car being pushed from the back, and the front end really feels very light and like it’s pivoting around the rear axle, giving the car a real sense of sharpness.

That’s because the Forfour has a quite rare chassis layout that puts the motor at the back driving the rear wheels – the same setup as a Porsche 911. That’s what gives the cart its unusual sense of balance.

There is quite a lot of dead in the centre of the steering movement, though. A blessing and a curse. On one hand it stops the car from feeling twitchy at high speed, which would definitely be a problem in this thing. But on the other hand, the car does feel like it needs a little too much arm movement around town. You do wish it was a bit more responsive at low speed.

Is it the most responsive electric car on the market? Nope – it only has 82hp and because of the battery it’s actually quite heavy. But it still feels fairly sprightly…at anything up to about 50mph, that is, at which point it just runs out of steam. It feels like a small car on the motorway too. Quite a lot of bluster, like there’s not quite enough soundproofing. The ride quality is a little on the firm side but it stays comfortable without being crashy.

Actually, there is a decent amount of leg space in the back and the tall roof means headroom is good too, but again, this is a short-distance car in both mileage and comfort terms. Couple of compromises for the driver too: the steering wheel doesn’t adjust for reach and the pedals are a little close together, but most will find it comfy.

The unusual layout means boot space is hindered – the 185-litre boot is much smaller than the 250-litre space in the electric Volkswagen Up. In real terms we’re talking about 2 bags of shopping and that’s about it. However, Smart has engineered the rear seat bases to flip up to liberate more space – you can slide a big telly in there – and the front passenger seat folds completely flat. Basically, this will be slightly better at IKEA than you expected it to be. Assuming you’re there by yourself. 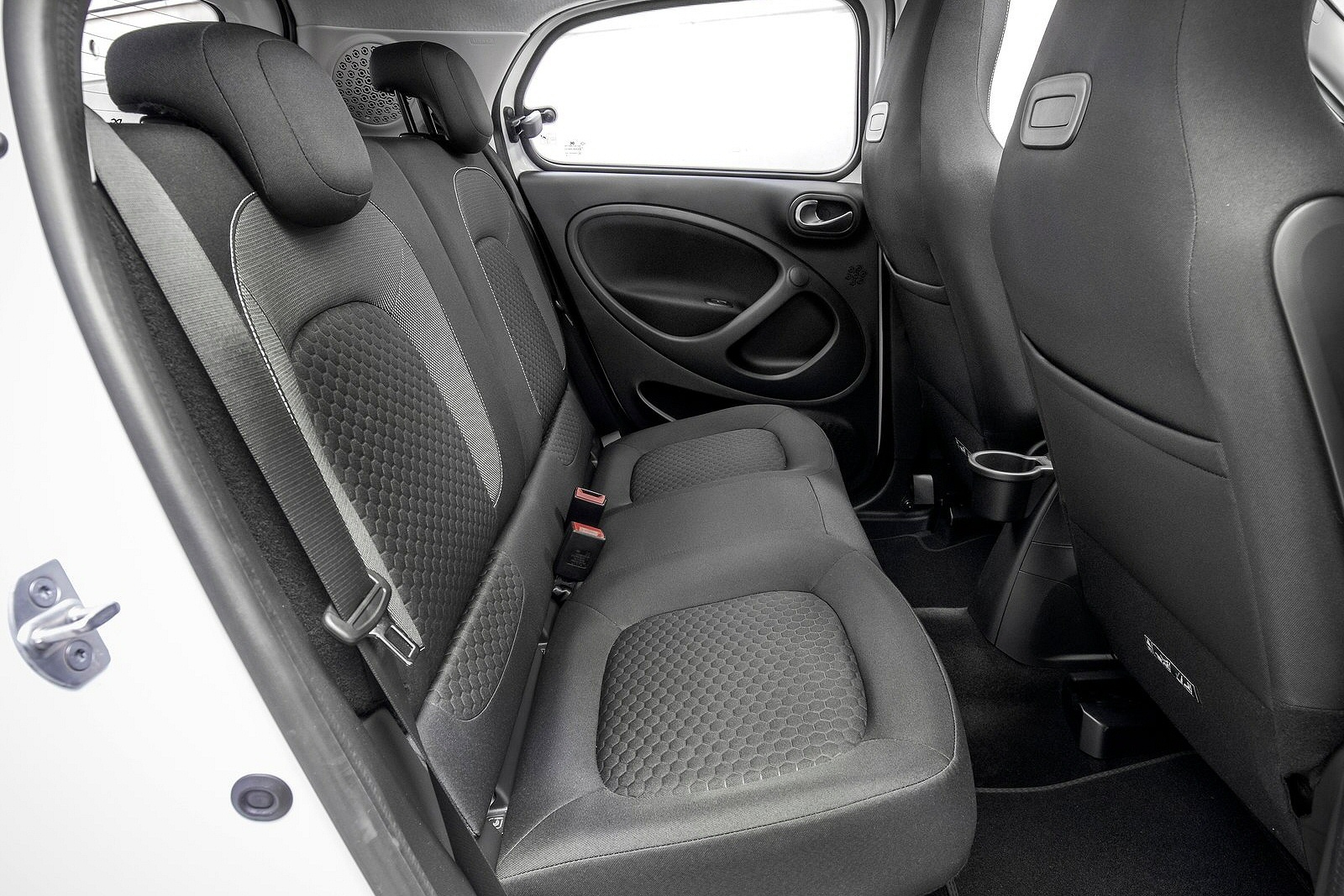 Not much. This is really where the Smart comes into its own in the pantheon of EVs. If you’re sold on the idea of an electric runabout, don’t do many miles a day, and don’t need a massive amount of space, then the Smart EQ Forfour is about as cost-effective as zero emissions motoring comes. We’ll lease you one for around £200 per month, your energy costs will be miniscule, and you’ll pay virtually nothing in tax.

It’s well equipped too, with base models (currently called Premium) coming with 16-inch alloy wheels, a leather steering wheel, a rear-view camera (should you need it), navigation, climate control and cruise control. You really don’t need any more Forfour than a base one. 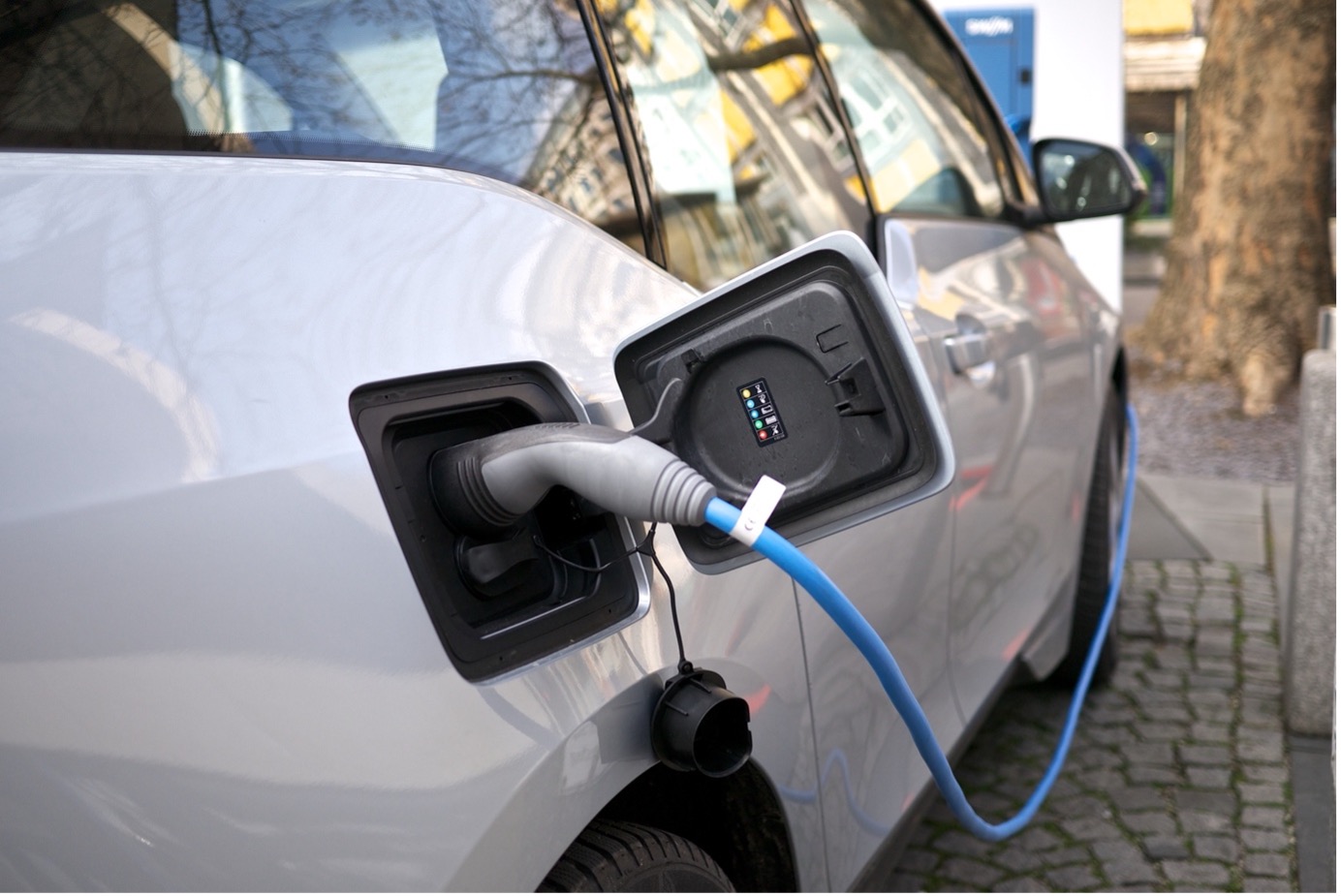 Download the Smart phone app and you can use it to pre-heat the cabin, find out how much charge you’ve got left, schedule your charging and even get weather updates. It’ll link to your Apple Watch too, assuming you’ve got one…which you probably have, because you’re techy and cool in your electric runabout.

Great looks and an absolute tech-fest in the cabin, but hampered by a small battery range.

Probably the most fun EV in pure driving terms, but the battery hinders long distance use.

Huge battery range, lots of space and great value, but not that much fun.

Three things to remember about the Smart EQ Forfour:

More On Cars
Fiat 500e Electric Vs. Fiat 500
We compare the brand new battery electric 500e with the petrol-electric Hybrid version of the older 500.Read More
MINI JCW Countryman Review
Motoring expert Matt Robinson takes the Mini JCW Countryman for a spin in our latest review...Read Review
MINI Electric Vs. MINI Cooper
We put the Electric and Petrol models of this popular hatchback to the test...Read More