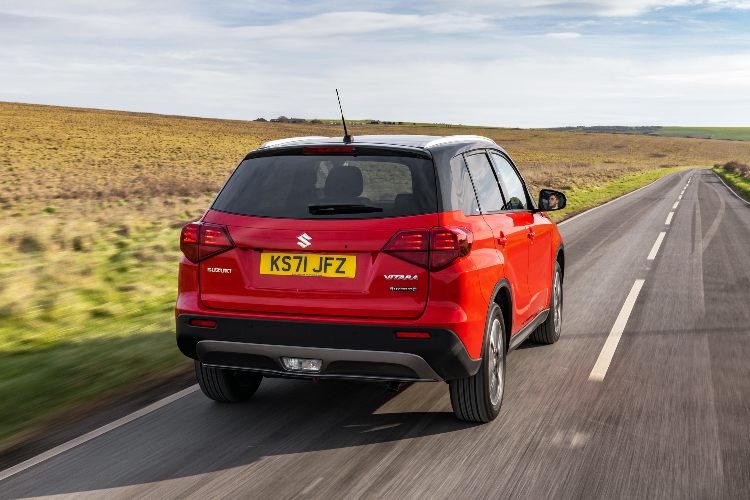 The current Suzuki Vitara is a spacious, practical, well-equipped and relatively affordable crossover SUV with a great reputation for reliability. That should be enough, right? Thing is though, the compact crossover SUV segment – that’s the one with cars like the Nissan Juke and Ford Puma in it - is massively popular these days, and therefore choice is abundant. And so, with the Vitara getting on a bit – this version has been around since 2015 – Suzuki decided to update it quite late in life with a petrol-electric hybrid setup, making it a bit more cost-effective to run. 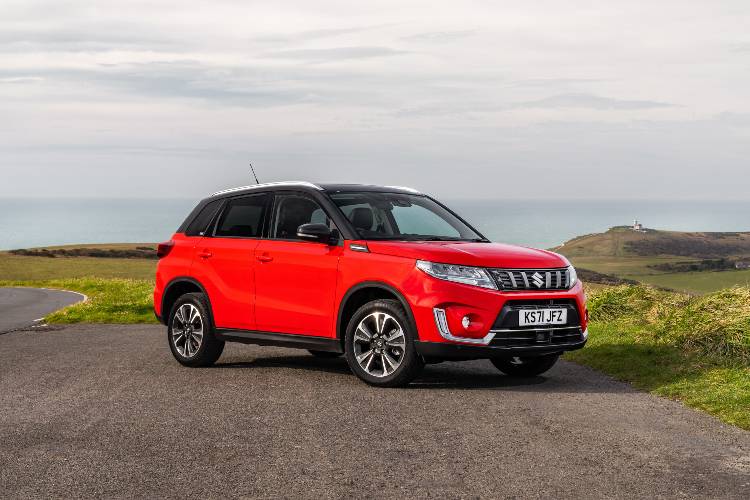 For a start it’s easy to pick which Vitara’s best for you because there are only 2 available trims, and even the lower one, called SZ-T, is very well specified; every Vitara comes with 17-inch alloy wheels, full smartphone connectivity, a rear parking camera, cruise control and a load of safety kit. You can have it with an especially fetching contrasting black roof, too.

But mainly, the Vitara’s appeal lies in its combination of spaciousness, solidity and reliability. And on that last point in particular, the Vitara scored 100% in a 2022 reliability survey by a popular consumer magazine, with no owner reporting any faults – one of only 3 cars to achieve that result. 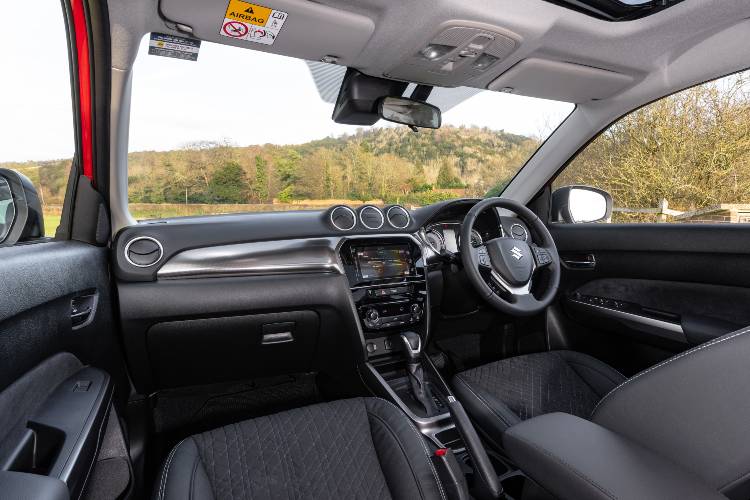 It’s not the most glamourous crossover on the market, and you’ll definitely find some that feel better in the cabin than the Vitara – it’s all a bit monotone, and the interior doesn’t have any sections of soft-touch loveliness like you’ll find in a SEAT Arona or Nissan Juke. It’s solid, but it just doesn’t feel that… sophisticated. Heck, it even has analogue dials, with physical needles – no fancy digital instrument panel here. The touchscreen that controls the infotainment is a bit fiddly too, although Suzuki has at least separated out the air con controls rather than burying them into the software like some carmakers do now, so it’s all very easy to use. 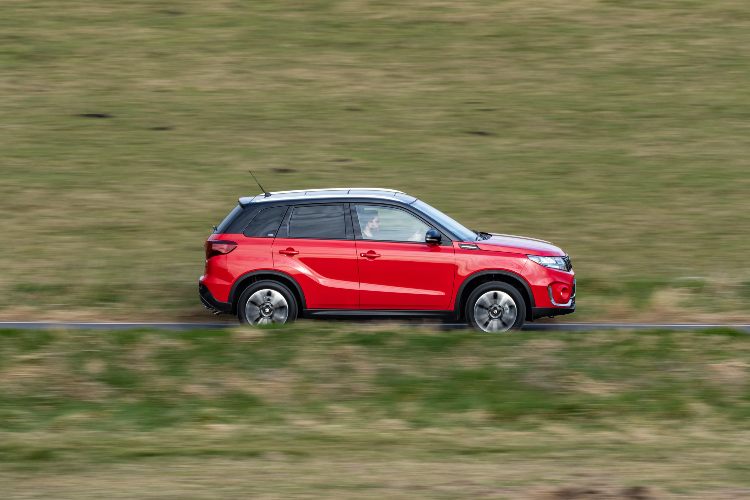 Leaving the hybrid system aside for a minute – we’ll come back to that – the Vitara drives in perfectly pleasant fashion. In fact, as far as SUV-style cars go it’s actually quite good fun, in keeping with Suzuki’s general shtick of making cars that feel a bit lighter and more nimble than their competitors. See the Suzuki Swift for details. The driving position will suit all shapes and sizes, the pedals are well spaced out and weighted for easy comfort, the steering is light, and generally the refinement is good. Whether you’re driving around town or on the motorway you won’t hear too much outside noise in a Vitara.

You could argue that the ride quality is a little bit harsh, which is the result of a suspension setup that’s less sophisticated than those in other crossovers, but it’s never enough to make the Vitara feel uncomfortable. It just means that occasionally you’ll feel a little more of the road surface than you might want to, but then the trade-off is that you get a bit more fun when turning a corner, a bit more feel, than you might expect. Albeit in a rough-and-ready sort of way.

However, that sense of fun is somewhat diminished by the hybrid setup. To explain, the Full Hybrid system links a 1.5-litre petrol engine to a 33hp electric motor for a 115hp total, with 138Nm of torque peaking at 4400rpm. Basically, that’s not a lot of torque at quite a lot of revs, which tells you that this car needs a lot of throttle to get the most from it. The standard 6-speed automatic gearbox is pretty jerky when being driven quickly as well. Therefore, the Vitara Hybrid is a lot more suited to being driven gently, which allows the electric motor to cut out more frequently and power the car alone. That improves refinement (no engine noise) as well as fuel consumption, meaning you’ll find Suzuki’s 53mpg efficiency claim achievable.

There’s a 4-wheel drive version too, called Allgrip, which doesn’t alter the driving experience in any measurable way day-to-day but will give you a bit more low-speed traction on gravely roads. The Allgrip version is a little less efficient too, down to 48mpg. 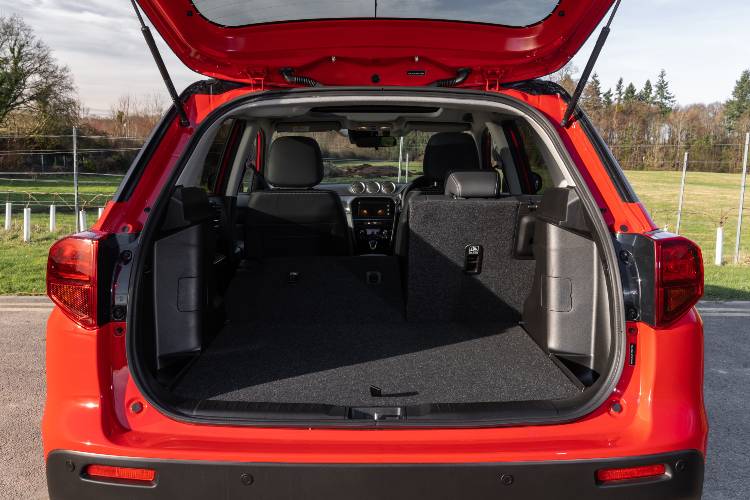 In size terms the Vitara is fits the brief of a compact crossover like a Vauxhall Mokka or Volkswagen T-Cross, which means it feels quite compact on the road. Its styling means it has a lot of headspace front and back though, and the rear legroom is passable for kids and smaller adults. Boot space for the hybrid is 289 litres, rising to 642 litres with the rear seats folded down, which is a little small for the class – the Juke has a 422-litre boot. That said, the Mild Hybrid Vitara has a 375-litre space, rising to 710 litres. 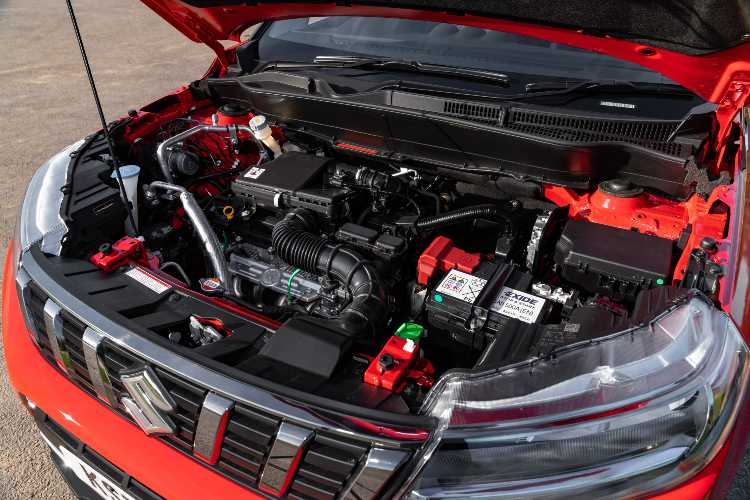 The Vitara range kicks off at £23,749, while the Hybrid’s base price as an SZ-T is £25,499, with the premium to move up to a top spec SZ5 around £2000. For that you get a panoramic sunroof, polished alloy wheels, front & rear parking sensors, navigation, a better stereo and nicer cloth for the seats. Lease rates are excellent, well under £250 for a kick off, in part because of the Vitara’s good residual values, and although Suzuki’s 3-year warranty isn’t class-leading as compared to Kia and Hyundai (7- and 5 years respectively), reliability is, again, superb.

In 2015 the Vitara was awarded a full 5-star safety rating by Euro NCAP, and although that result has expired now because the testing method has become stricter since then, it’s no less safe today than it was 7 years ago, of course. All Vitaras get a safety kit list that includes LED headlights, lane departure prevention, traffic sign recognition, blind spot monitoring, ISOFIX for child seats, adaptive cruise control and airbags all the way around the cabin.

Bargain crossover motoring that’s nice to drive and considerably cheaper than the Vitara… and everything else.

More sophisticated and a lot more fun to drive than the Vitara, but more expensive too.

"There are more glamourous small crossovers, but the Vitara is a good looking, practical, well-made and cost-effective choice."

3 Things To Remember About The Suzuki Vitara Hybrid: