The Most Instagrammable Electric Cars

If there was such a thing as an Apple iPhone equivalent in the automotive world, it would surely be the latest range of electric cars. The new cool kids on the block thanks to Elon Musk and a couple of other industry leaders, electric cars have shifted from undesirable afterthoughts to the latest go-to vehicles for environmentally conscious drivers – and people can’t resist showing them off.

There are nearly 6 million #ev posts on Instagram, and we wanted to find out the most popular electric cars that people like to shout about on the social media platform. To find out, we searched for the 48 electric cars that are available on the Vanarama website and ranked them based on how many posts they have featured in.

Keep scrolling to find out which EV is the coolest of the cool kids. Perhaps unsurprisingly, the Tesla Model S is the most Instammable EV on the market with over half a million posts. Built from the ground up to be Tesla’s flagship car, the Model S is one of the most gratifying EV experiences available – and it can do pretty much anything. The car’s extreme comfort and style is only matched by its bonkers speed. From a standing start, the Model 3 can hit 60mph in an eyewatering 3.1 seconds and keep going until it reaches 162mph.

The other Tesla models: 3, X and Y also rank extremely highly on our complete list, which you can find at the bottom of this article. To give the other EVs a chance, we’ve included the most Instagrammable cars from five different manufacturers in our top 5 roundup – it’s the least we could do! The original petrol-powered DS3 was launched way back in 2010 by Citroen and was based on the DS Inside concept car unveiled the year before. With over 400,000 posts on Instagram, the latest electric iteration is proving very popular with the new, environmentally conscious motorist. The original car has morphed into the DS 3 Crossback, a technologically advanced electric car with a distinctive design and doors that open by themselves!

The Crossback offers a battery range of around 191–206 miles and is considered to be one of the most pleasurable EVs you can lease today. Its E-TENSE battery pack offers the electric equivalent of up to 62.8mpg. 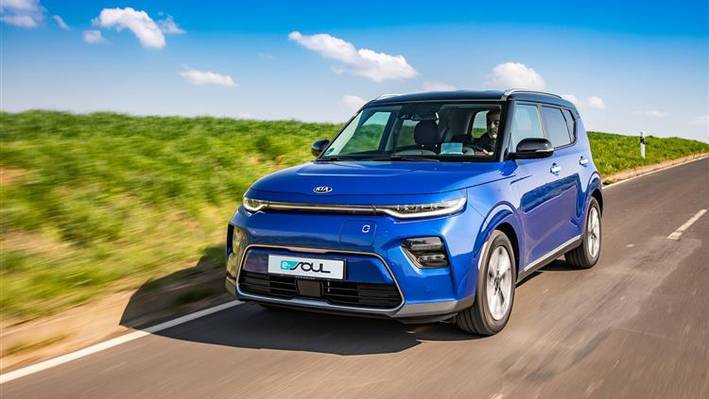 Coming in with a whopping 227,000 posts on Instagram, it’s the Kia Soul EV. The subcompact crossover SUV has recently made the transition from petrol-powered to all-electric, and it’s proving to be one of the most popular electric cars you can drive. The Kia Soul ticks all the boxes that you look for when leasing a new car: it’s affordable, comfortable and fun to drive.

The Kia Soul comes with a battery range of around 300 miles – that’s about enough to get you from London to Newcastle upon Tyne in one go. Not only is the EV extremely functional, but its exterior has a cool and hip vibe making it a favoured choice with young professionals and families alike. The Porsche Taycan is one of those cars that isn’t meant to make sense. An electric-powered Porsche. Despite the initial confusion, the Taycan has proved that it’s just as much of a Porsche as its predecessors. The car is exceedingly popular on Instagram. The sporty EV has amassed around 157,000 posts since its release in 2019. That’s over 50,000 per year or 137 posts per day.

The car can go from 0-60mph in 2.4 seconds, making it the third-fastest electric car on Earth and one of the hardest to catch to get the perfect Instagram snap. The estimated range of 193 miles is impressive considering the power under the proverbial hood. One of the first EVs to make its way onto UK roads, it feels like the Nissan Leaf has been around since the dawn of time. In fact, it’s only been since 2011. The new second-generation Leaf has quite the following on Instagram with over 135,000 posts of the vehicle.

The hatchback is a complete all-rounder, offering an affordable monthly cost whilst also being able to put a smile on your face.

In total, Vanarama analysed the Instagram posts of 48 EVs, all of which are available on our electric car leasing deals page. Here’s the complete list of the most Instagrammable cars on the market:

Increase your followers by leasing one of the most Instagrammable EVs in the world. Visit our electric car leasing deals page, featuring the likes of the Lexus Ux, BMW i3 and Audi E-Tron

More On Cars
Connected Car Cybersecurity Guide: How To Protect Yourself & Your Data
It was only matter of time until the internet made its way to our cars, heres our guide to how to stay vigiliant and keep your car protected against potential threatsRead Guide
Fiat 500 Electric Colour Guide
Here’s a detailed look at the paint palette available on the Fiat 500 4-seater city electric vehicle (EV), which we hope will help you choose your perfect new car colour...Read Guide
Porsche Taycan 4S Review
Did we really call it the best driving EV in the world right now?Read Review