If you've always promised yourself a cabriolet but have some budget restrictions, don't worry, you can now get your hands on a brand new convertible that won't break the bank! How? By leasing one!

I've put together some of the most desirable models on the market to suit all needs. These cars not only look great on the driveway, they feel fantastic, roof-down on the open road too. 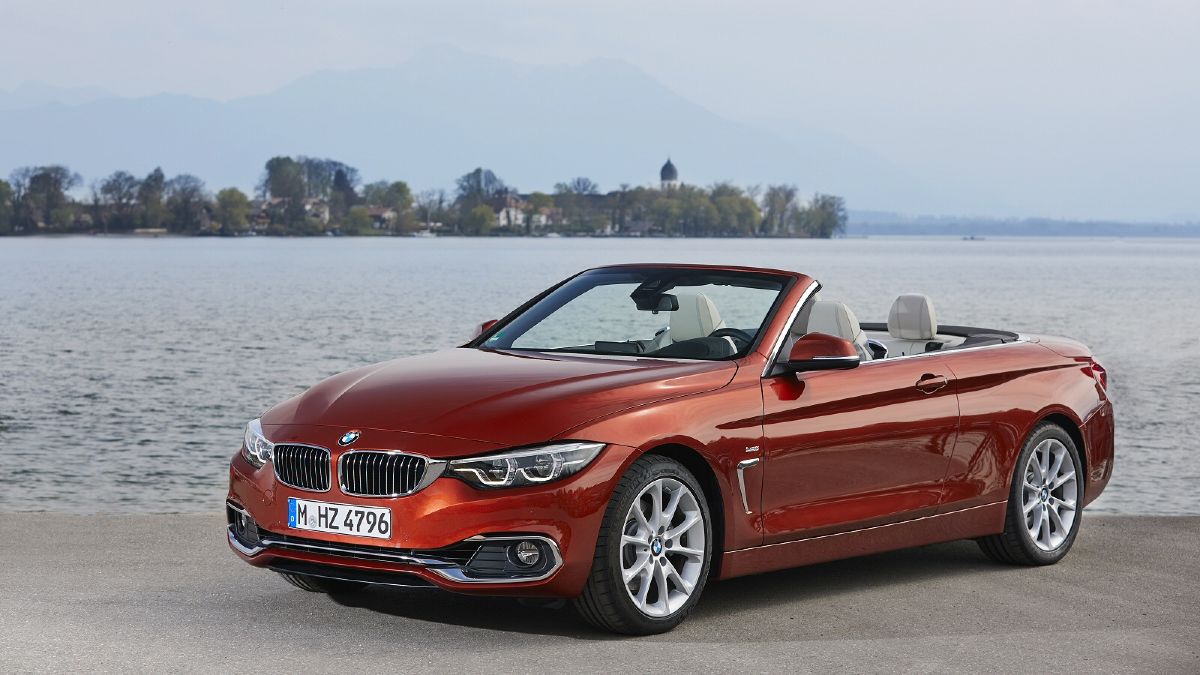 Should a convertible have a fabric folding roof? You'll have your own ideas on that. BMW's 4 Series convertible is one of the few Cabrios that still has a folding metal hard top. That'll be either a selling point or something that might make you think twice. It certainly has security benefits and BMW has managed to incorporate the extra weight of this roof without affecting this model's classic 50:50 weight distribution. Bear in mind though, that this car is still 250kgs heavier than a directly comparable 4 Series Coupe. That's the main reason why convertible versions of the company's smaller 2 Series and larger 8 Series models both have fabric tops.

While we're on the topic of the roof, there's another advantage - it uses 3 rather than just 2metal pieces, which means you don't need an ugly rear end added onto the car that would usually be added to accommodate the larger sections of a 2-piece roof. This particular hard top takes 20 seconds to operate and can function at speeds of up to 8mph. With the roof up, you'll get 370-litres of luggage capacity, but fold it down and that figure falls to just 220-litres. This is the 'F33'-series version of this model, first introduced in 2013. Today, it offers an enticing engine range, starting with the 190hp unit used in the 420d diesel. Next up are a couple of 6 cylinder diesel powerplants, the 258hp 430d and the 313hp 435d, which has to be had with xDrive 4WD. If you want petrol power, the line-up starts with a 420i model that develops 184hp and there's a 430i variant with the same 2.0-litre turbo engine tuned out to 252hp. Finally, there's a top 6 cylinder derivative, the 326hp 440i. 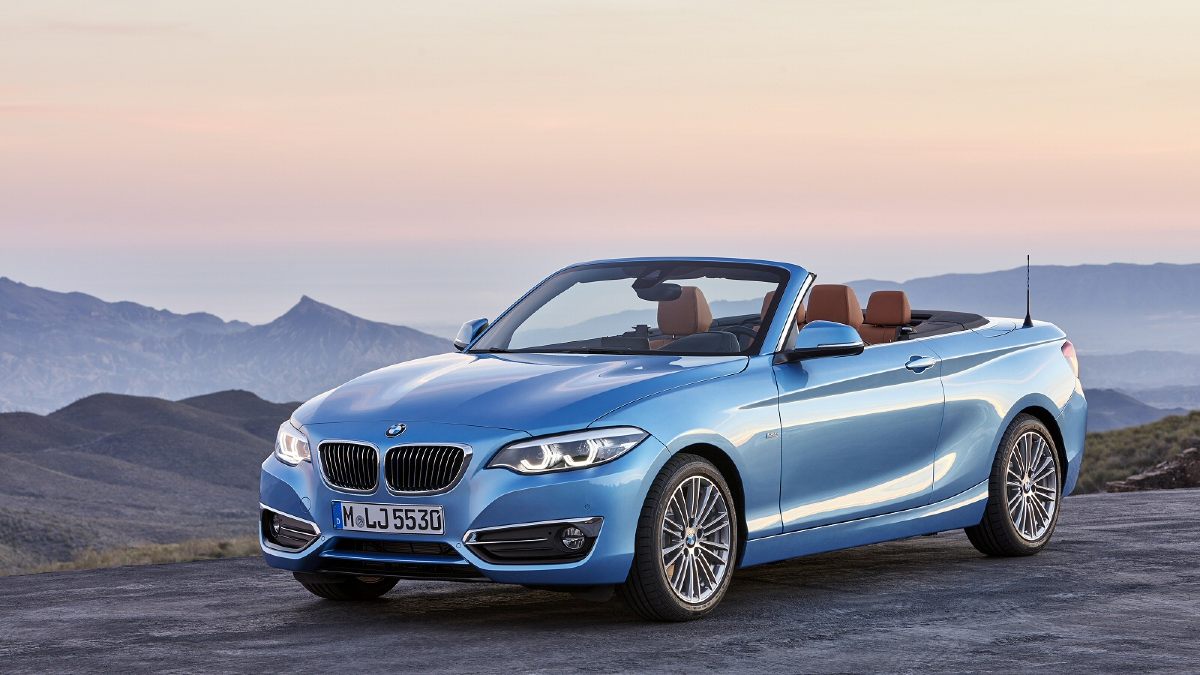 Who needs a lottery win? With a BMW 2 Series Convertible, you can really make a statement on a surprisingly affordable budget. This 2 Series Convertible has been with us since 2014, but it's still a very good looking car, especially top-down. The fabric top can be retracted in just 19 seconds at speeds of up to 30mph. And it doesn't take up too much luggage space, with 280-litres of capacity available with the roof retracted and 335-litres available when the top is up.

As you'd expect, the engines on offer are carried over from those in the 2 Series Coupe range – which happens to be a very good thing. Unlike with BMW's 2 Series Active Tourer and 2 Series Gran Coupe models, drive is directed to the back wheels, which gives this car more of an enthusiast feel through the bends. The petrol range kicks off with the 1.5-litre 3 cylinder 136hp powerplant used in the 218i variant. You'll find a 218i Convertible priced very affordably in our 'Offers' section in desirable 'M Sport' auto form. Need something more powerful? Well next up is a 2.0-litre 4 cylinder engine with 184hp in the 220i. At the top of the petrol range is the M240i, which has 340hp and some really potent performance credentials - it'll get to 62mph in a mere 5.0 seconds. Diesel options include the 150bhp 218d and the 190bhp 220d. 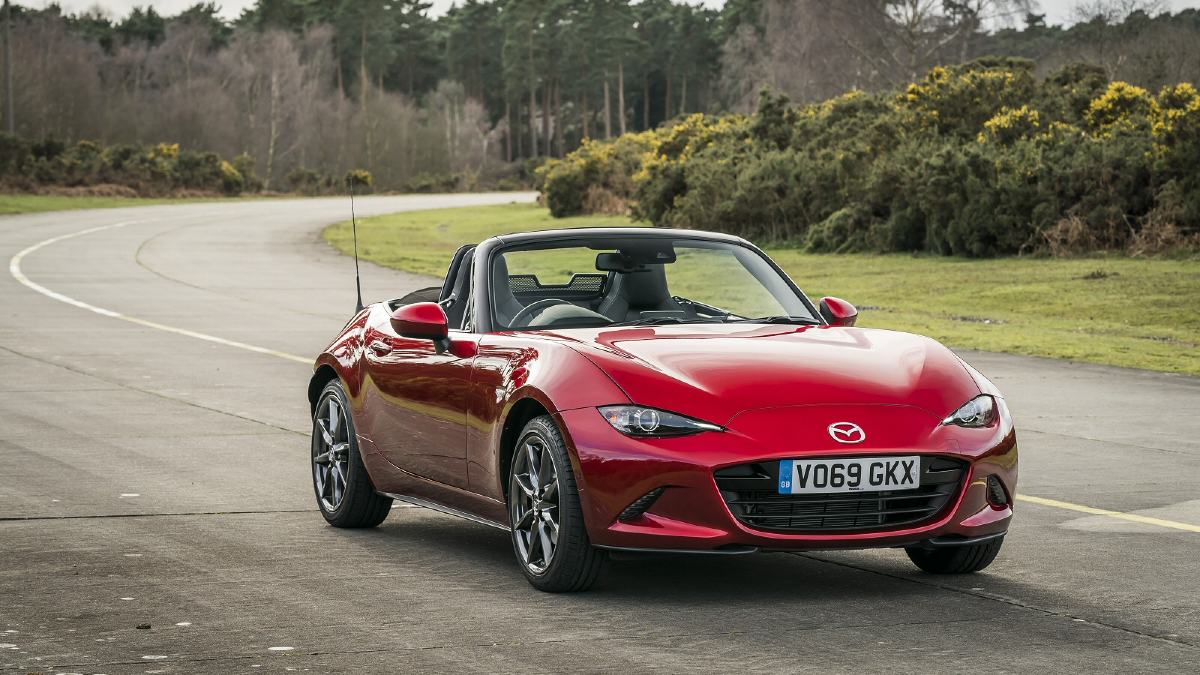 Is there anything quite like a Mazda MX5? This classic affordable roadster was first launched in 1989, borrowing its charisma from charismatic '50s and '60s British sports cars. It was much loved, though it's early phenomenal global success has proved harder to replicate in the modern era. But this 4th generation version has been changing things. Today it comes in soft top form – which is the variant most people choose – or in RF guise with a folding metal hard top.

The car was updated in 2019 with a slightly more potent 184PS version of its 2.0-litre petrol powerplant, but the entry-level engine, a 132PS 1.5-litre petrol unit, still remains as before and is probably as quick as you need a car like this to be. After all, an MX 5 isn't about going quickly in straight line; it's about razor-sharp handling, wind in your hair motoring and the rather pleasing feeling that you'll be having more fun in one of these than a lottery winner would be in a supercar roadster costing 10 times as much. You'll find an MX-5 priced very affordably in our 'Offers' section in desirable 'SE L Nav+' form. 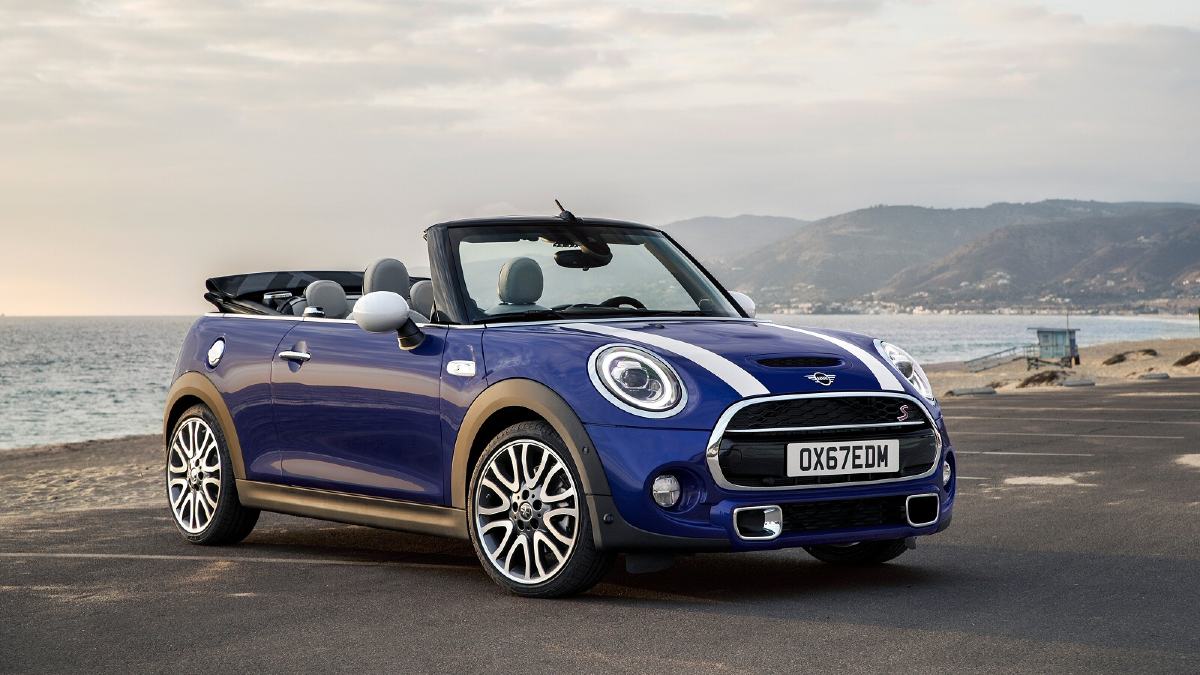 We're now so familiar with the idea of open-topped MINI motoring that it's almost a surprise to discover that this variant is primarily an invention of BMW, rather than the British motor industry. Yes, there were drop-top variants of the original Alec Issigonis design, but these were largely the work of specialist coachbuilders. Only in the final years of the early version did Rover commission a short production run of Mini Convertibles and even then, only 300 were sold.

BMW had no such reticence when it came to the idea of a cabrio model and shortly after the new generation MINI model's launch at the turn of the century, the first proper Convertible version (the 'R52' series model) joined the range in 2004. An 'R57' series MK2 design followed in 2009 before this current 'F57'-generation car arrived in 2015, which moved the car a small but distinct amount upmarket. The fabric top can be lowered or raised in 18 seconds, so when the British weather does its worst, you won't be left out in the rain for too lengthy a period.

One neat touch is that if you just want to open a small portion of the roof above the front seats, it can retract back by 40cm at any speed - rather like a sunroof. When the roof is down, it wraps around like a collar behind the rear seats, rather than disappearing entirely. But it still reduces boot space slightly: you get just about acceptable 250-litres when the roof is up, but just 160-litres when it's folded down. Engine-wise, it's an all-petrol powered line-up, which kicks off with a 1.5-litre 136hp 3 cylinder unit in the Cooper model, which sits below a 2.0-litre 192hp engine in the Cooper S, a tuned 231hp version of which features in the top John Cooper Works derivative. 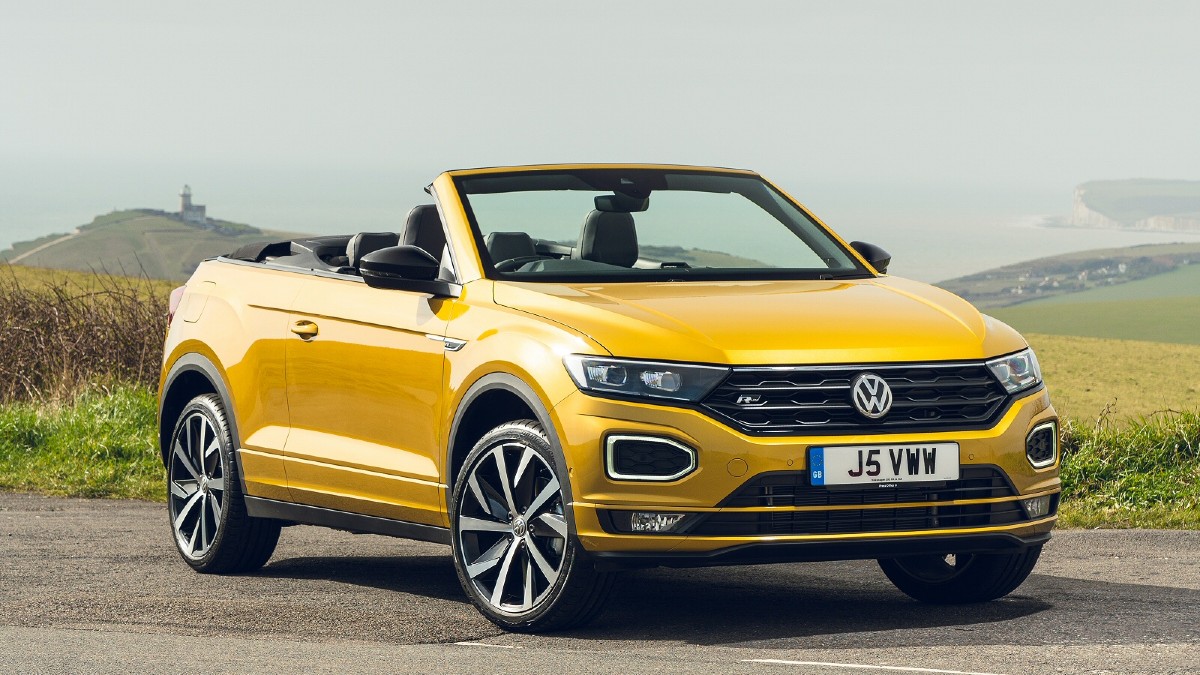 The concept of an SUV convertible is an unusual one, but Volkswagen has attempted to deliver it anyway, teaming up with specialist Karmann to design this T-Roc Cabriolet. Quite a lot needed to be done to the T-Roc chassis to make this drop-top version work; 37mm has been added to the car's wheelbase, which has added 34mm to this model's overall length. There also needed to be a vast amount of extra strengthening for the chassis, the doors, the windscreen surround and the sills. And the 4 framed doors that you get in an ordinary T-Roc are here replaced by a couple of longer frameless ones. There are no B-pillars either.

But you'll be wanting to know about the roof, a fabric top that can be lowered in less than 12 seconds and stows itself above the luggage compartment behind the rear seat. This won't be a cabriolet that particularly appeals to drivers looking for a sporty feel; partly that's because of the extra 194kgs of weight that this drop-top variant has to carry around. But it's unlikely that many potential customers will worry too much about that. There's a choice of 2 engines, a 115PS 1.0- litre TSI unit offered only with a 6-speed manual gearbox. Or a 150PS 1.5 TSI EVO powerplant that can be had either with manual transmission or a 7-speed DSG auto. 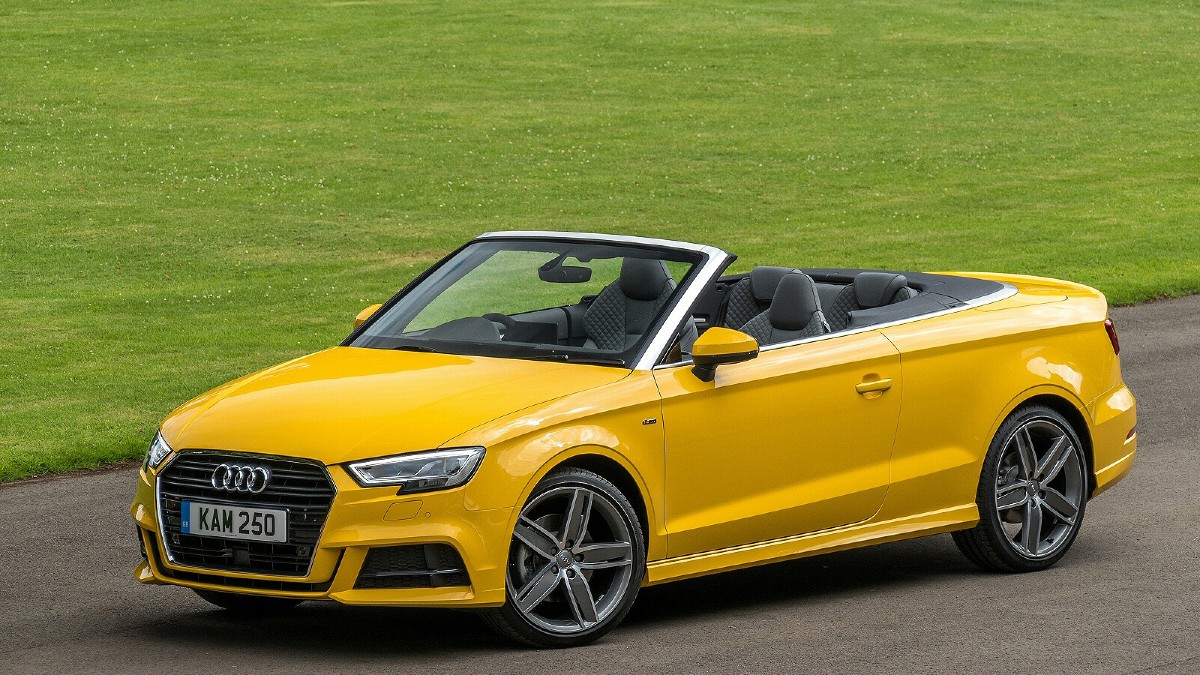 Back in 1994, a metallic green Audi Cabriolet was spotted by a paparazzi photographer slotting into a parking space at a fashionable London gym. At the wheel was Princess Diana, the car her chosen form of private transport. Almost overnight, the idea of a compact, fashionable soft top Audi became deeply desirable. And it still is. For proof, check out the current improved version of the brand's second generation A3 Cabriolet.

Much of course has changed since the Diana days. That original '90s Cabriolet was replaced just after the turn of the century by an A4-based soft top, which sold until 2009 and was replaced by an A5 Cabriolet model that proved desirable but a little pricey for some buyers. Hence the importance of the very first – and only slightly smaller - A3 Cabriolet model launched in 2008, which morphed into this much prettier MK2 model in 2014, which was updated a couple of years later to create the car we have now.

The soft top fabric roof is stretched over a magnesium-steel skeleton and the top opens or closes in less than 18 seconds on the move at speeds of up to 31mph. The top retracts into 3 layers and resides in a tray that barely affects cargo capacity, rated at 287-litres. As for engines, the range kicks off with a 1.5 TFSI petrol unit in the 35 TFSI version. Alternatively, there's a 2.0-litre petrol engine in the 40 TFSI model which comes only with S tronic auto transmission and can be had with optional quattro 4-wheel drive. At the top of the range is the S3 Cabriolet, a quattro model which uses the same 2.0-litre TFSI engine tuned out to 300PS and gets you to 62mph in a fraction over 5 seconds. Toupees will need to be glued very firmly on.

For more motoring news, check out our car blog and, while you're here – why not browse our car leasing deals or latest convertible offers.

Best Cars For MPG
Its all of the best cars for Mile Per Gallon...Read More
Best New Cars Of 2021
With 2020 well behind us, let's look ahead to the best new cars hitting the road in 2021Read More
The Ultimate Guide To Estate Cars
Looking for a car offering superb practicality? Here's our pick of the best estates available.Read More
We use cookies to improve your experience. Find out more in our cookie policy.