Vauxhall’s large hatchback, the type of car that some people would once have lazily called a ‘repmobile’ if they didn’t know any better. The original Insignia of 2008 suffered a little from the hangover of the underwhelming Vectra predecessors, probably why Vauxhall changed the name of the model to Insignia in the first place. But this second-generation car, launched in 2017, was a huge improvement.

It features a vast cabin and has, during its years on sale, come in two main body styles (the hatch, sometimes referred to as the Grand Sport, and an attractive Sports Tourer estate) as well as a crossover-inspired lifestyle model called the Country Tourer. A facelift at the start of 2021 freshened up the styling, the infotainment and the interior (to a degree), while it also brought in revised engines. There are 1 or 2 areas where the second-gen Insignia doesn’t quite match up to the opposition – there are no plug-in or mild-hybrid derivatives available, for instance, and the digital dials in the car’s instrument cluster leave a lot to be desired – but in many regards, this is an excellent, understated and fundamentally likeable big machine that will have you wondering why you’d splash out extra on a comparable SUV. 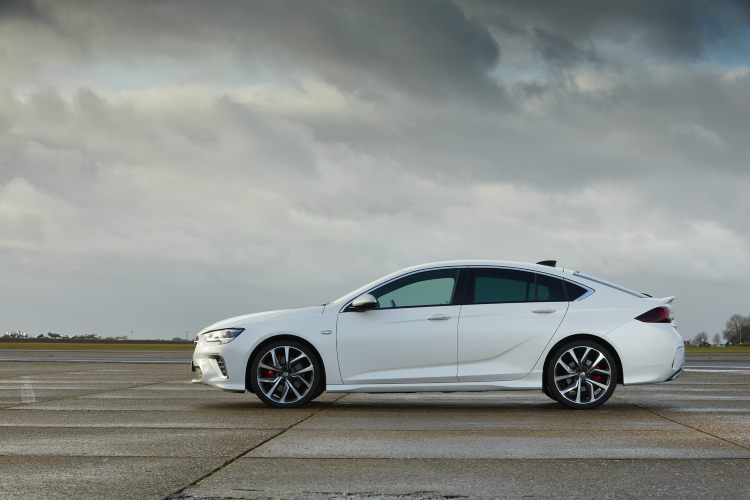 It’s quite a good-looking car, the Vauxhall Insignia. It doesn’t have any particularly dramatic styling flourishes but with its long, low shape and a roofline that segues into a sloping fastback rear, it has a certain quiet handsomeness about it that’s most appealing. 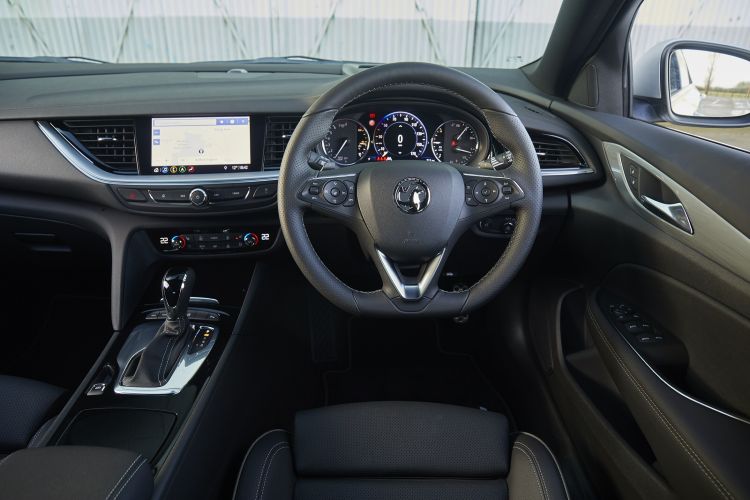 Then there’s the cabin. It’s nicely put together, with an intelligent layout of all the major switches and buttons – and there are physical climate controls, which are becoming an increasingly desirable feature in a ‘touchscreen this and voice control that’ world of in-car human-machine interfaces. But it’s the sheer amount of space on offer that will stick with you. There’s an enormous volume of room for passengers sitting in the rear and up front, and it feels a luxurious and expensive vehicle in terms of comfort levels and the adjustability of the driving position. On certain models, the driver even enjoys the privilege of a massaging seat. Classy.

For all its space and solidly built feel, we’re not so sure why Vauxhall continues to make its interiors feel like the depths of a coal mine. This is a very, very black cabin. There are a few silver flashes here and there to try and lift things, but they’re the exception not the norm. When everything is so dark within it starts to feel a bit sombre when you’re sat in it for too long, just looking around you.

Vauxhall’s digital displays also aren’t in any way class-leading. On grander models, there’s a larger 8-inch touchscreen which also supports Apple CarPlay and Android Auto, so you can bypass Vauxhall’s proprietary system if you so wish. Which you will probably want to do, because the satnav mapping isn’t the sharpest in the world. Also, the unusual configuration of the central digital screen and analogue dials in the instrument cluster looks basic when compared to the full TFT driver displays in rivals.

Many Vauxhalls over the years have not been known for their great chassis but the Insignia is not a car to count among their number. This is a sweet-handling car, with good steering, nice balance and an ability to make travelling through a corner a fun event, rather than a chore. So while there are no real performance models in the range - despite there being a GSi at the top of the tree that has a pretence of sportiness with a 230hp 2.0-litre turbo petrol engine - driving an Insignia quickly along a country road is a pleasurable experience.

Of course, this is a car designed to excel on long-distance treks, specifically on motorways and big A-roads. And Vauxhall ought to be highly commended for the Insignia’s adaptive damping, called Flexride. Three modes of Normal, Sport and Tour offer real light and shade in terms of the ride comfort; this is not always something car manufacturers get right, but the Vauxhall has nailed it and in Tour mode the Insignia will soothe away mega-miles with little difficulty.

Perhaps the most underwhelming part of its dynamic make-up comes in the form of the updated engines introduced in 2021. There’s no mild hybrid tech on the petrols to better save fuel, although they do use different combustion methods and even cylinder deactivation – this is the ability to run on 2 cylinders during periods of light load on the engine. However, the 200hp 2.0-litre can sound coarse and strained at higher revs, and it doesn’t feel particularly lively in the lower operating range either. Coupled to a so-so eight-speed automatic transmission, the drivetrain on the Vauxhall is not as cultured as you’d find on key rivals. Specifically, anything from within the wider Volkswagen Group, like the Skoda Superb or the Volkswagens Passat and Arteon.

How Practical Is it? 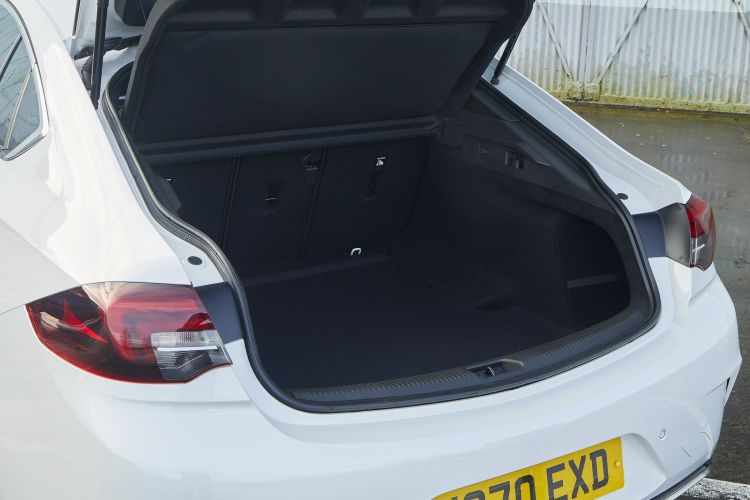 We’ve already talked about the space in the interior, which is plentiful, but there are also plenty of other practical touches in the Vauxhall Insignia. There’s a storage compartment ahead of the gear lever and another one behind it. The front door bins and the glovebox are all a good size, while another cubby hole underneath the centre armrest features an unusual, upright wireless charging pad for smartphones.

Be warned that the centre-rear seat isn’t quite as accommodating as the two outer positions are, with footroom taken up by a hump in the car’s floor. Also, the rear door bins are considerably smaller than the same items in the front doors.

In terms of boot capacity, the Insignia isn’t quite as astounding. With 490 litres on offer with the seats up and 1450 with the second row of chairs folded away, it doesn’t compare brilliantly against the Peugeot 508’s 487-1537 litres, the Volkswagen Arteon’s 563-1557 litres and the Skoda Superb’s immense 625-1720 litres. Even a BMW 3 Series saloon has 480 litres on offer. However, from SRi Nav upwards, 40/20/40 split-folding backrests make configuring the cabin to just how you need it a doddle.

How Much Does The Insignia Cost?

Vauxhall has priced the Insignia reasonably competitively, although it’s by no means the cheapest car in its part of the market. Base SE Nav models do come with a generous kit list to mitigate this somewhat, though, so you’ll enjoy at least a 7-inch touchscreen infotainment system with satnav, Apple CarPlay and Android Auto, 17-inch alloy wheels, dual-zone climate control, front and rear parking sensors, LED lights all round, automatic emergency braking, and auto lights and wipers among more.

Step it up to only mid-ranking SRi VX-Line Nav grade and the infotainment is enlarged to an 8-inch display, huge 20-inch wheels are added, the seat facings become leather, there’s keyless entry and start, the driver’s seat has a massage function and a Bose Premium Audio system is also drafted in. Even the headlights become Intellilux LED Pixel units, which can selectively dip part of their high beam automatically at night.

If you want the best running costs, the diesel Insignias make the most sense. A 1.5-litre 3-cylinder turbodiesel was introduced for 2021 and can achieve 57.6mpg with 121g/km of CO2, while a more powerful 2.0-litre 4-cylinder engine is no worse for tailpipe emissions and can still return up to 51.4mpg. The petrol cars are not quite as efficient, although 167g/km of CO2 and 37.7mpg from the 200hp 2.0-litre automatic model aren’t bad numbers at all.

The facelift for 2021 moved the LED signatures of the Vauxhall Insignia’s front daytime-running lamps from the top of the cluster to the bottom, while simultaneously revising the radiator grille, front bumpers and air intake apertures. Other minor aesthetic tidying means the Vauxhall continues to look like one of the smartest cars of its type that’s available right now.

In terms of safety, the Insignia scored very highly in 2017 with a full five-star rating, picking up particularly good marks of 93% and 85% in the adult occupant and child occupant departments respectively.

What Are The Best Insignia Alternatives?

Attractive styling and far superior interior finishing makes the Peugeot 508 hard to ignore in this class.

Nothing does vast cabin and vast boot better in this part of the market than the Skoda Superb. It really is. Superb, that is.

Offers hybrid power and is based on the very good Lexus ES, but we bet you’d forgotten the Camry was back on sale, right?

Three things to remember about the Vauxhall Insignia:

The Top 25 Hatchbacks For 2021
Our handy guide on the 25 best hatchbacks you should be driving this year... Read More
Car Body Types: The Ultimate Guide
Today we have a wide variety of car styles, but what do they all mean and which is best for you?Read More
Car Insurance Groups Explained
What do car insurance groups really mean? Here’s our handy guide... Read More
We use cookies to improve your experience. Find out more in our cookie policy.