The Vauxhall Mokka in petrol, diesel and electric forms does more than most to draw these different fuel sources into a single range of cars. It gives buyers plenty of options to tailor this compact crossover to their needs. More compellingly, it highlights just how good the EV version is and why it’s the pick of the bunch. 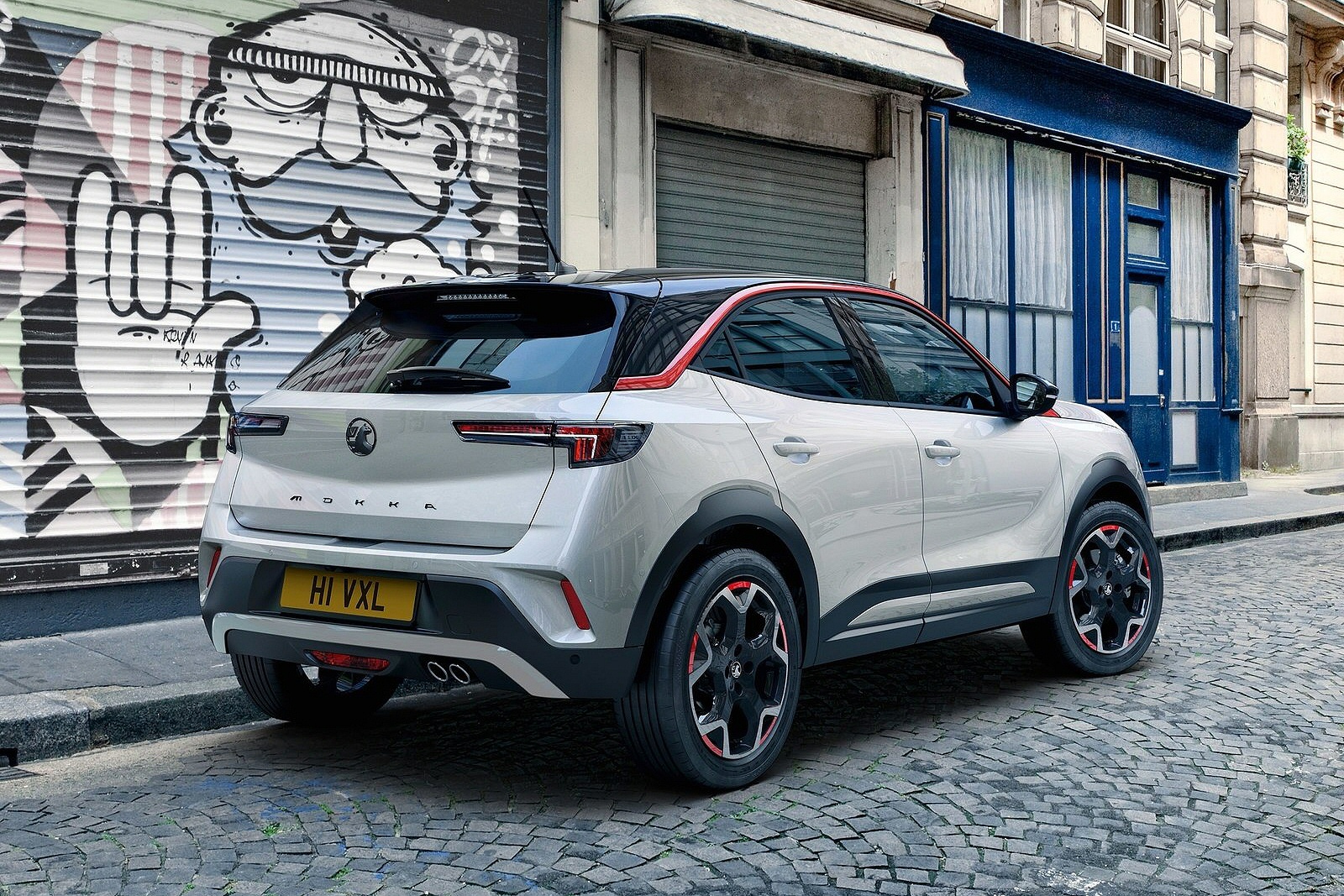 Vauxhall is a past master at building cars for the masses. That has not always meant it’s made the best cars, but the likes of the Corsa, Astra and 1st-generation Mokka have all found hordes of willing owners. With the 2nd-generation Mokka, Vauxhall has taken a bit more of a punt with the styling, shifting it into a more sharp-edged, modern direction. It's available in 6 paint options, with a massive amount of interior and other customisable elements. See our Mokka colour guide for details.

It's fair to say that the Mokka has not abandoned any of the basics its predecessor did so well. It still dishes up the high-set driving position that makes it easy to shimmy around town in, it’s comfortable, and there’s a typically Vauxhall broad spread of trim levels. Like the Corsa, the Mokka also brings battery electric power into the mainstream of the range, rather than trying to ‘other’ it. OK, the EV version is called Mokka-E, but that’s about as far as it goes.

The result is, choosing an electric Mokka doesn’t feel as bold or daring as it does with some others in this class, which is the intention from the now French-owned British car firm to keep its longer-standing Mokka drivers content to carry on choosing this compact crossover rival, rather than a Ford Puma, Peugeot 2008 or Skoda Kamiq. 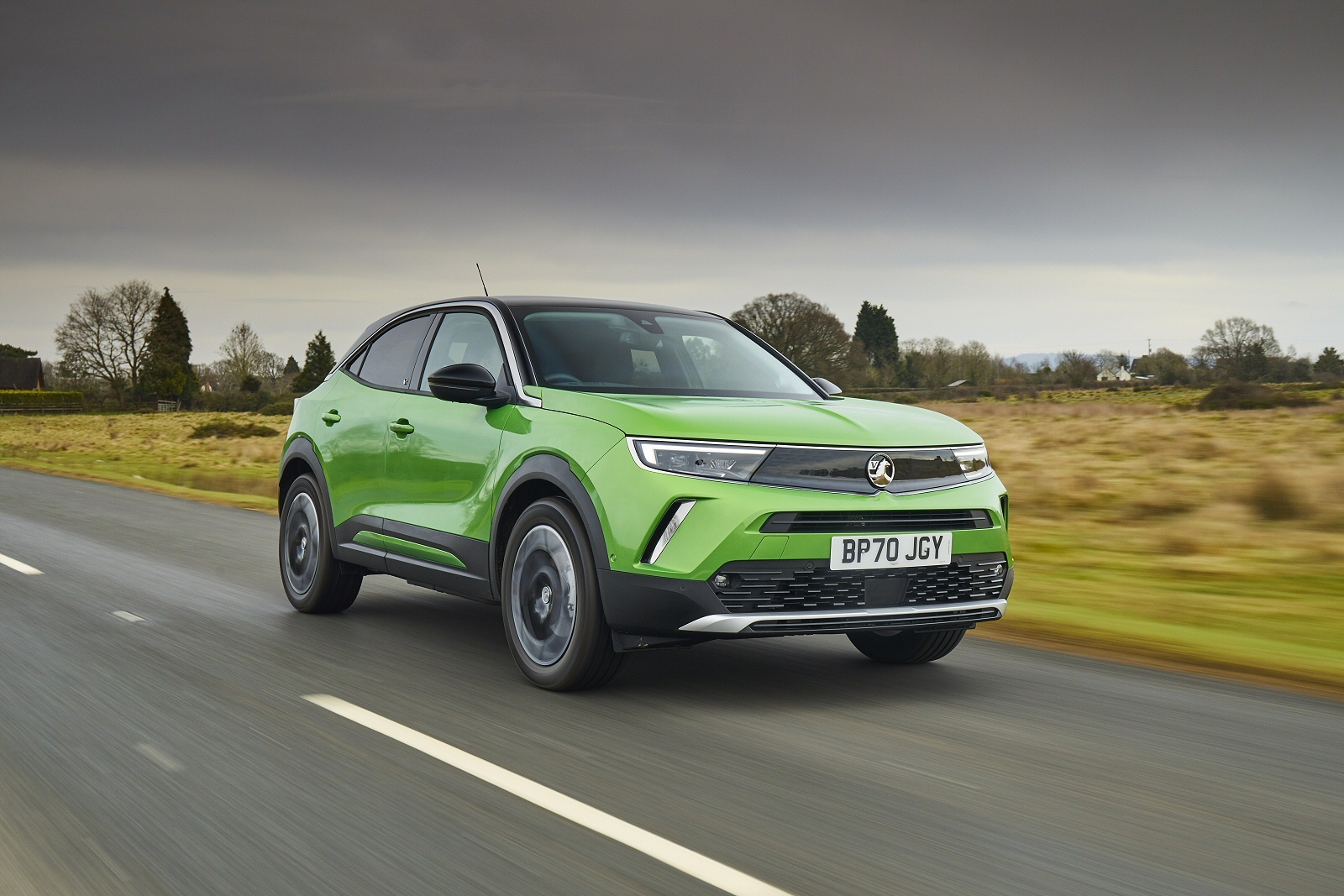 In keeping with Vauxhall’s decision to make the Mokka-E just another model in the compact crossover line-up and less intimidating to choose for those who are not so EV-curious, there’s not much to give the game away from the outside. A tiny ‘E’ badge on each of the centre door pillars and one on the tailgate are all you get.

Of course, the keen-eyed will also spot the Mokka-E has no tailpipe as there’s no need for one. However, all Mokkas have the same front-grille treatment, where the upper section is filled with a solid section as all of the cooling intakes are positioned lower down. The Mokka-E, like all electric cars, needs these cooling ducts to keep the battery at the right temperature. As for the battery pack itself, it is sited in the same layout as in the Corsa-E, so you find one set under the rear seat and the other under the front seats.

While talking about the differences between fossil-fueled and battery-powered Mokkas, we need to mention boot space as perhaps the most obvious differentiator. In the petrol and diesel Mokkas, you get 350 litres of cargo room with the rear seats up and 1105 litres with the back seats folded. Switch to the EV and those figures are reduced to 310 and 1060 litres, respectively.

The battery pack sends power to the 100kW motor under the bonnet that drives the front wheels through a single-speed transmission. This is the only choice of gearing you get with the Mokka-E, where the 130hp 1.2-litre petrol engine (the most powerful petrol option) can be had with either 6-speed manual or 8-speed automatic gearboxes. The rest of the internal combustion range sticks to the manual ’box. With the Mokka-E, you also have a choice of 3 driving modes – Eco, Normal and Sport – that dictate how responsive the throttle is and how quickly the car accelerates, so you can vary between having fun and eking out the longest driving range. 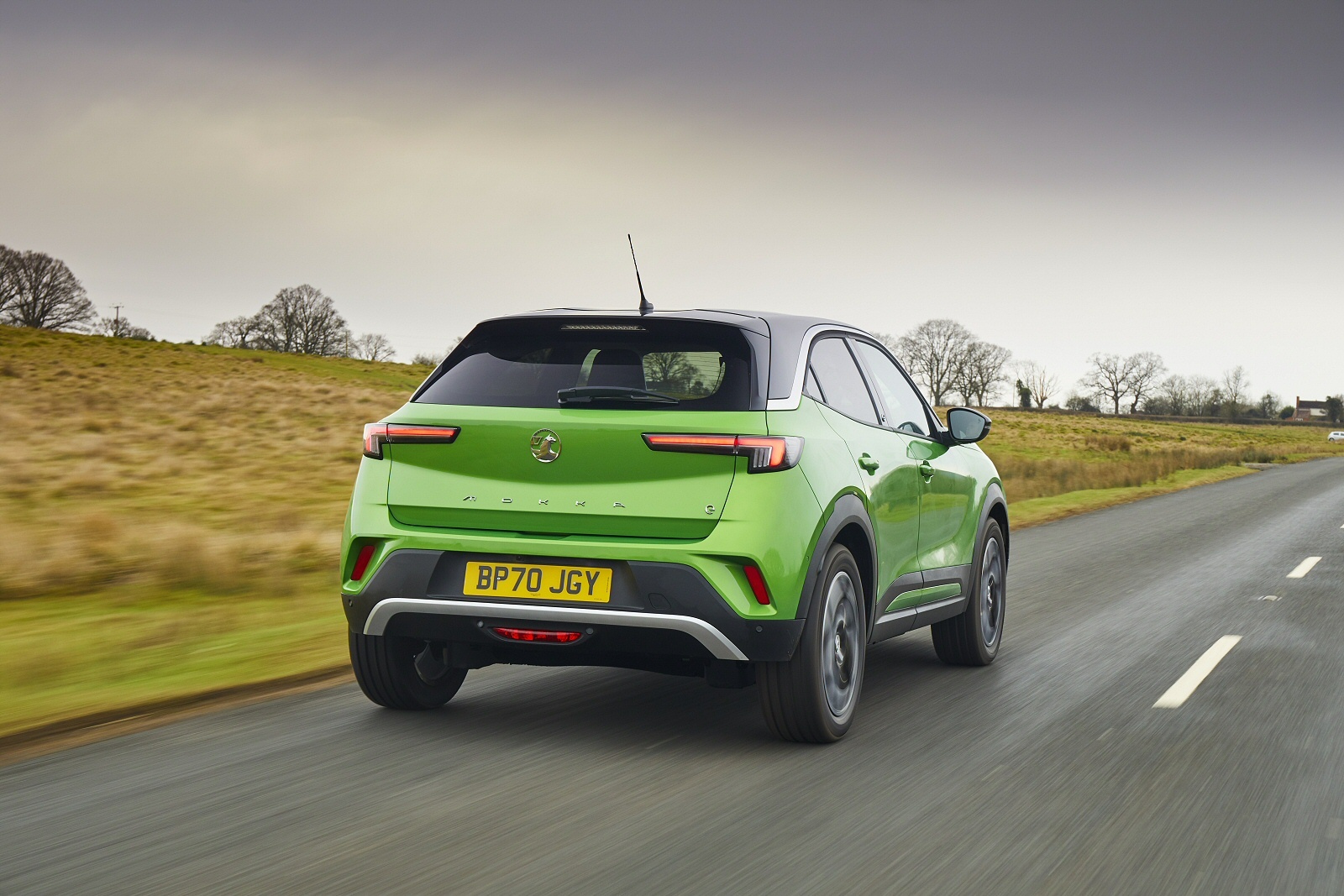 When comparing some petrol or diesel models against their EV counterparts, there’s a ‘but’ waiting round the corner to say the EV is good, but… Well, not here. If you are happy with the official claim of 201 miles to a full battery charge and a realistic range of 160 miles from one socket session to the next, the Mokka-E is the one to have. It feels like the car Vauxhall wants you to have, the one it put most of its effort into, and this is how it behaves on the roads. It’s just that bit better in every respect as you drive along, compared to its internal combustion siblings.

It’s also telling the Mokka-E’s drivetrain feels better resolved than the Corsa-E, as if Vauxhall had a bit more time to hone it. This is most obvious in the way the electric Mokka picks up from a standstill and how refined it is at all speeds. Where the Corsa can pull away with a slight judder or scrabble from the front tyres if you’re in a hurry, the Mokka-E is smoother and more grippy off the line. The result is you’re happy to exploit those small gaps in city traffic that make all the difference between getting on with your commute or being stuck at a junction for aeons.

In town, the Mokka-E is streets ahead of the 1.2-litre petrol model we’re directly comparing it with here. The 3-cylinder petrol motor can be a little gruff when cold, though when warmed up it has that aurally satisfactory note when pushed hard. However, the Mokka-E stretches its advantage with its 3 drive modes, offering Eco, Normal or Sport settings. In Sport, it is surprisingly swift, while Eco makes the most of the car’s battery range.

In Normal mode, the Mokka-E makes its mark with how refined it is. We reckon it’s a notch above the Peugeot E-2008 it shares the same platform with. The high-set driving position is ideal for town driving, while motorways are just as hushed. Even in SRi trim, the Mokka is not a keen driver’s car; it’s much more about comfort and calm, and that feeds in to the overall sense of the Mokka being more grown-up than many others in this class. You can read our full thoughts on how the the 2nd-gen handles in our full Mokka review. 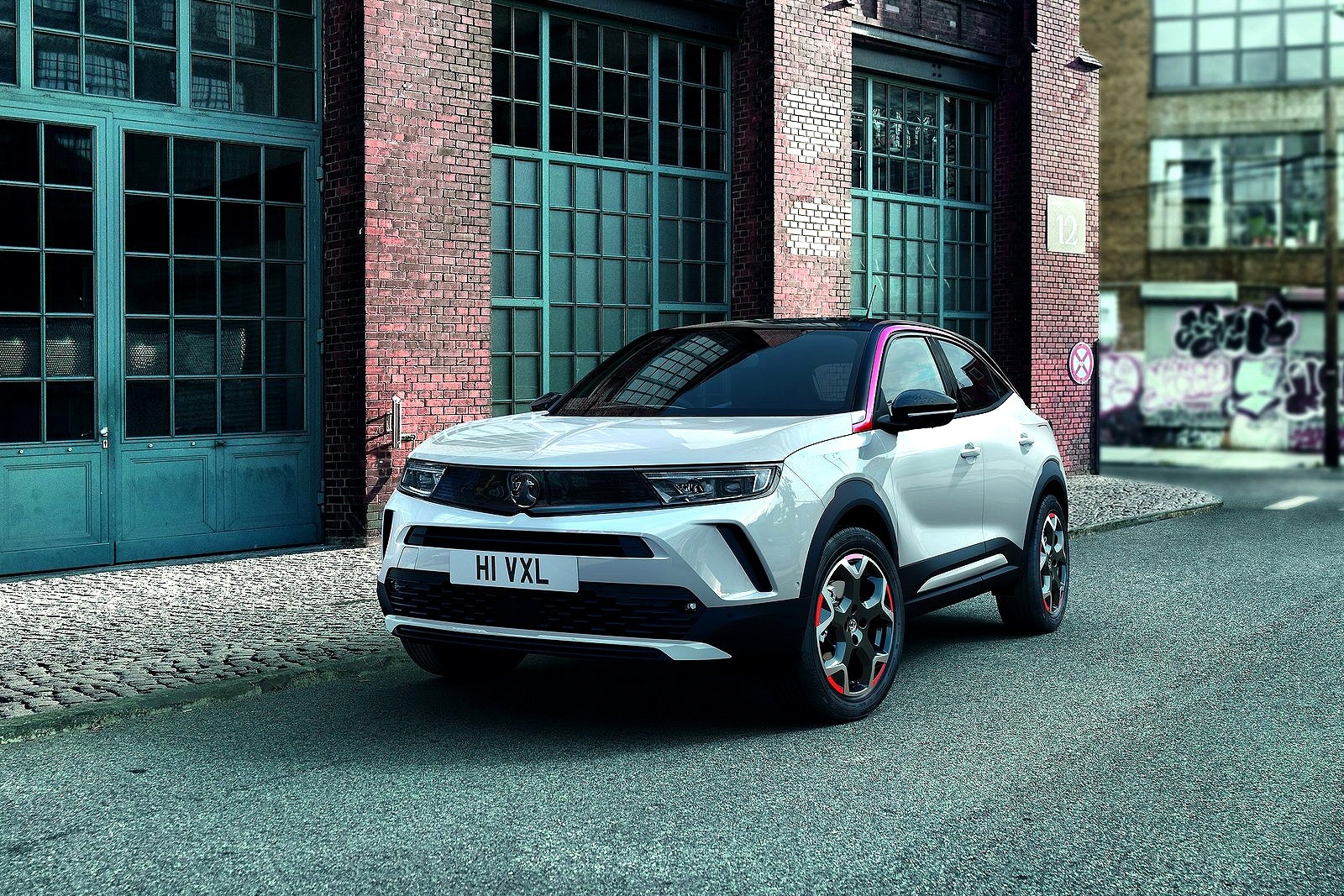 Practicality comes in different forms and some will find the 201-mile combined average battery range of the Mokka-E is impractical for their driving needs. We wouldn’t argue with this as this figure is certainly at the lower end of the scale for this class of compact crossover EV. Where a Renault Zoe can now offer around 250 miles per full charge and a Kia E-Niro goes beyond that, it can be a bind to have to charge up more frequently.

If you are less concerned with longer driving stints, the Mokka-E does the job very well. Its front cabin shares the same amount of space for the driver and passenger as its sister models powered by petrol or diesel. The EV also has the same twin-screen instrument set-up, with larger screens in all but the base model. It all looks good and functions logically, though the resolution of the larger screens seems a half-step behind the class best.

In the rear seats, the Mokka-E is good for the kids but Granny and Grandpa will feel a bit shortchanged when you pick them up for Sunday lunch. Still, the boot is on a par with the class average at 310 litres. Fold the back seats down and you get 1060 litres to pack in bags and boxes. Both of those numbers are smaller than the petrol Mokka being compared here, but not by a significant amount.

Vauxhall claims a combined average range of 201 miles for the Mokka-E. Choose the petrol model we’ve chosen here and you could travel just shy of 500 miles on a single fill. In more usual driving conditions, that would be about 400 miles to a tank.

For business drivers, the Mokka-E’s zero tailpipe emissions mean a monthly benefit-in-kind payment of only £5.80 where the 1.2 Turbo 100 petrol driver will be handing over £120.48 with every page turn of the calendar. The petrol driver will also be spending £180 on Vehicle Excise Duty in the first year, where a Mokka-E user will shell out nothing.

For insurance, the petrol car works out cheaper as it sits in group 14 to the EV’s group 22 rating. However, the Mokka-E fights back with its 16,000-mile or 2-year service intervals. A petrol-powered Mokka driver will be booking a service every 12,500 miles or 12 months. Both cars share the same 3-year, 60,000-mile warranty, and the EV has an additional 8-year, 100,000-mile battery cover. 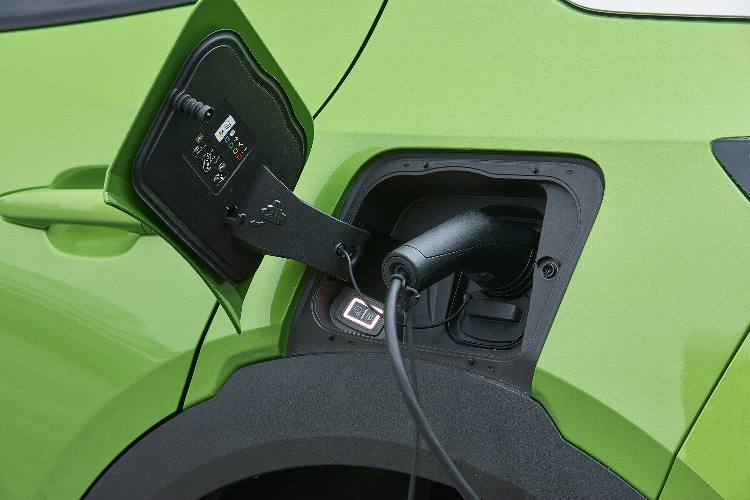 Vauxhall provides a Mode 3 cable with the Mokka-E, so you can use most public chargers easily. When you plug in, there are coloured lights to let you know the state of play, whether that’s charging, charged, delayed charge, or malfunction. You can also choose between immediate charging or delayed charging if you want to wait for a lower energy tariff.

As for charge times, a home wallbox will take about 7.5 hours to fully charge the Mokka-E from a completely flat battery. A 50kW public charger will take the battery from 15- to 80% charge in 45 minutes.

You can monitor the Mokka-E’s performance through the infotainment screen, and Vauxhall also offers its Plug & Go scheme. This provides a home wallbox in the price, plus 3 years’ free servicing, 6 months of BP Pulse subscription, and the 8-year battery warranty with roadside assistance included. 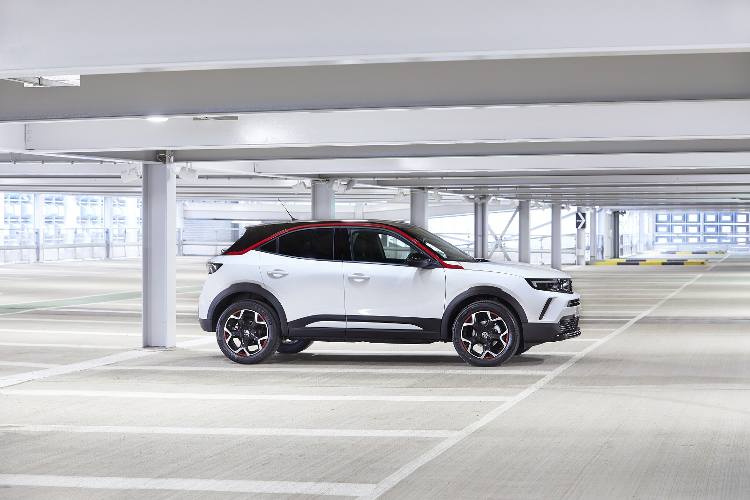 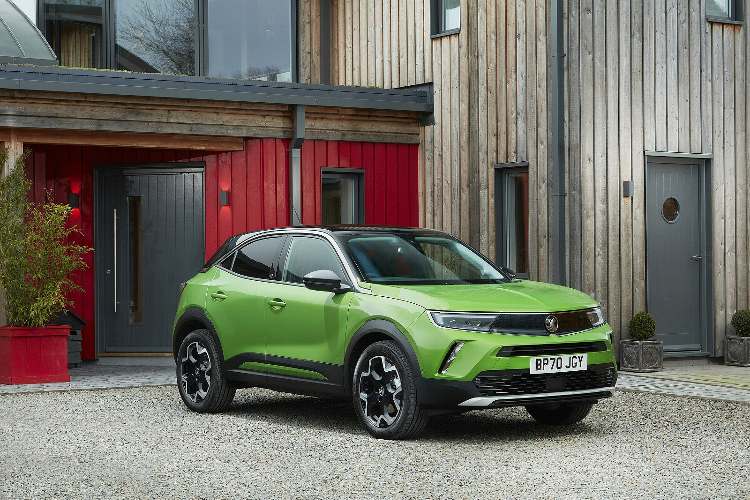 More On The Mokka