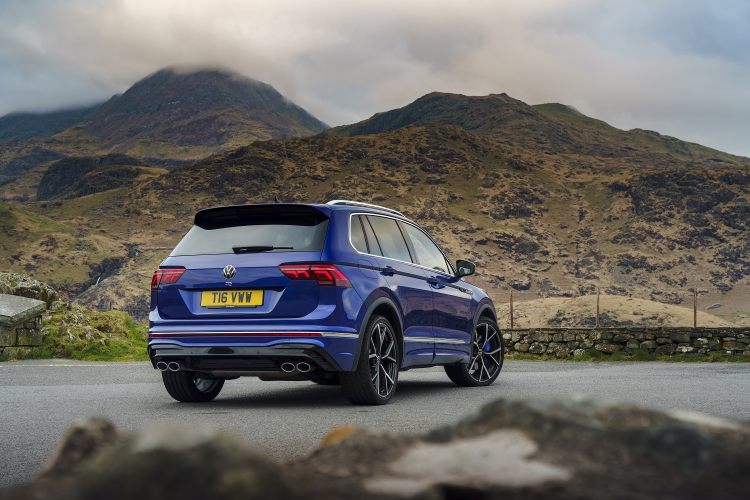 The 2nd entrant into a growing portfolio of high-performance Volkswagen SUVs, this is the Tiguan R. We’re onto our 2nd generation of Tiguan these days, but there was never a red-hot version of the Mk1 predecessor (2007-2015). However, this time around, VW has a much broader platform of R products which it can use to leverage a 320hp iteration of what is, in normal trim, a fairly humdrum midsized family SUV.

Yup, 320hp. This Tiguan R follows on from the smaller (and surprisingly ballistic) T-Roc R, but while both SUVs have 2.0-litre turbocharged 4-cylinder petrol engines from the EA888 line, the T-Roc makes do with a neat 300hp – whereas this bigger Tiguan enjoys exactly the same powertrain as found in the Mk8 Golf R flagship and also the luxurious Arteon R. What we are aiming to find out is whether such a robust engine in such a pragmatic car was a worthwhile exercise on VW’s part or not. 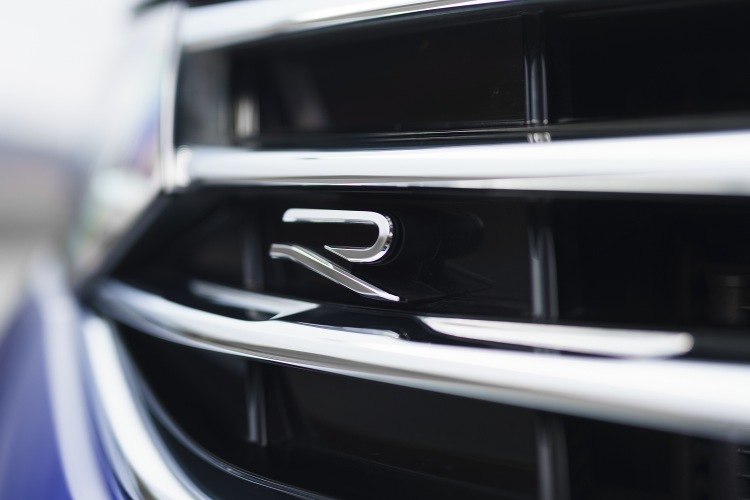 Well, there’s no doubt the sharper-edged Mk2 Tiguan, which launched in 2016, is a better-looking contrivance than the blobby Mk1 version, and so the facelifted Mk2 wears the R styling addenda very well indeed. A socking great full-width front airdam is the main giveaway as to this SUV’s rapidity, but there are also R trademarks like quad exhausts at the rear, silver detailing (notably, for the door-mirror caps) and discreet badges dotted about the body. Then there are a set of colossal 21-inch ‘Estoril’ alloys, behind which lurk a powerful 18-inch braking system complete with 357mm front discs and blue brake callipers. All of these touches have enough aggression about them to let bystanders know this is a serious Tiguan, without ever coming across as aesthetically crass or gaudy. That’s a tough styling tightrope to walk and VW has done it remarkably well.

Similarly, the interior is typically VW-excellent, with Sardegna cloth sports seats giving an upmarket vibe, while a 10.25-inch Digital Cockpit Pro instrument cluster brings the tech level to the latest prevailing class standards. Also, the Tiguan is, as we’ve already said, a family SUV, so you get plenty of space in the 2nd row of seating and a whopping great boot, as well, which we’ll come onto in the practicality section below. However, it’s not all good news in the cabin… 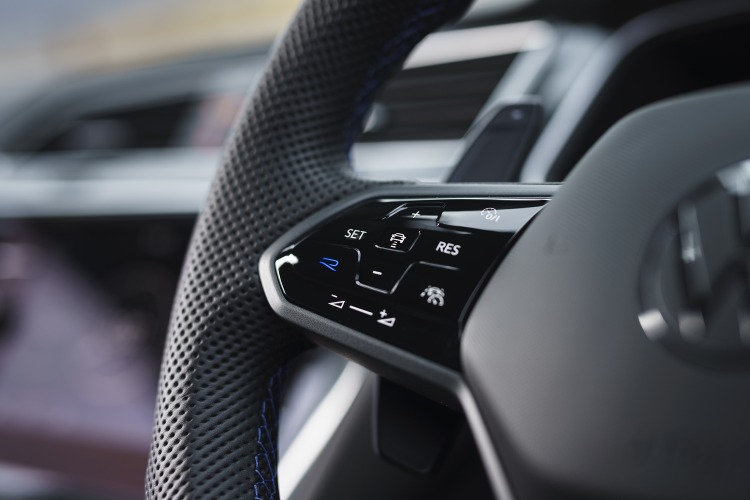 The Tiguan R is a curious blend of parent company VW’s overriding desire to get rid of all physical switchgear in its very newest products (see the ID.3, ID.4 and Golf Mk8 for details), coupled to in-car connectivity tech that’s maybe one step behind the current norms. So, even on this near 50-grand range-topper, you get a piffling 8-inch touchscreen infotainment system that looks like it’s straight out of a Golf Mk6, never mind the Mk8. And yet, many will rejoice because that infotainment system has simple-to-operate shortcut buttons and knobs arrayed down the side of its screen, while yet more switches line the transmission tunnel either side of the gearlever for the 7-speed DSG transmission.

Nevertheless, while the climate controls are on a separate panel, they’re now weird haptic buttons on this facelifted Mk2 Tiguan, rather than good old-fashioned (and intuitive) switchgear, and then we come to the functions which are mounted on the steering wheel. Good grief, these are not pleasant. Shared with the Mk8 Golf, they’re kind of haptic and also capable of being pressed fully, so in theory only the lightest brush of the various gloss-black panels should activate certain features of the Tiguan R. In reality, they don’t work well at all – and if you decide to fully press down on the button, they’re nothing short of awful, with an odd 2-stage click-type feel to them that just suggests they’re broken in some way. Ugh. 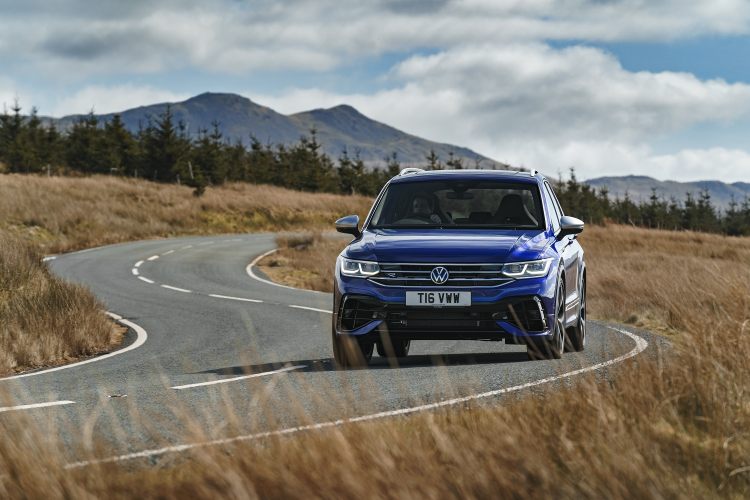 Despite having an extra 20hp and 20Nm on the T-Roc R, the Tiguan is obviously a bigger and heavier car – so quoted performance is actually slightly slower than the T-Roc, with 0-62mph taking 4.9 seconds as opposed to 4.8 seconds for the smaller SUV. You can see more detail on how the Tiguan and T-Roc compare in our head to head article. That said, having driven both hot VW SUVs, it’s definitely the Tiguan R which felt more rabid – quite markedly so, in fact, and to the point that an even grander Touareg R (a plug-in hybrid with a 462hp V6 drivetrain) which arrived for evaluation the week after the Tiguan came across as positively sluggish in the aftermath.

By crikey, with 4Motion all-wheel drive and a whipcrack 7-speed DSG dual-clutch auto, you don’t experience much in the way of hesitation from the Tiguan R. Even if it’s in the more relaxed of its 7 – SEVEN! – drive modes, it still responds to sizeable throttle inputs by punching forward near-immediately with real ferocity. It also sounds good, in that raspy, angry fashion the EA888 2.0-litre 4-cylinder has for so long, and with the XDS electronic diff lock on the front axle and good, if a little lightweight steering to work with, the Tiguan R is an admirably capable and engaging machine in the corners.

It also remains very pleasant for day-to-day driving duties, although those 21-inch alloys on 35-profile tyres do make their presence readily known over less-than-perfect road surfaces, despite the fitment of 3-mode Dynamic Chassis Control (DCC) adjustable dampers. However, the Tiguan R never becomes unbearably uncomfortable and is a thoroughly adept motorway cruiser, where its brawny engine is allowed to murmur along at little more than idle by the long-legged DSG – which results in a best on-test motorway economy of 36.7mpg and an overall weekly figure of 32.6mpg across 647 varied miles. Seriously, for a 1.67-metre tall, 1.75-tonne SUV with this sort of power and a non-hybrid petrol drivetrain, getting on for 40mpg is deeply, deeply commendable.

In fact, weirdly enough, the VW Tiguan R proved to be one of the most enjoyable and likeable VW R products we’ve yet driven. So why are we not more enamoured with it? Well, there’s 1 big problem with this car… and, rather embarrassingly for the group, it’s this: there’s a better high-performance SUV available with the same engine, the same platform and much of the same technology, for less money than the Tiguan R. And it’s that Spanish upstart, the Cupra Formentor 310 TSI 4Drive, which takes the honours. Genuinely, try both of these 2 vehicles and then wonder how Volkswagen allowed subsidiary SEAT to come up with finer, more electrifying chassis settings for its more inexpensive Cupra Formentor than its own R division did for the hottest Tiguan flagship. It’s baffling. 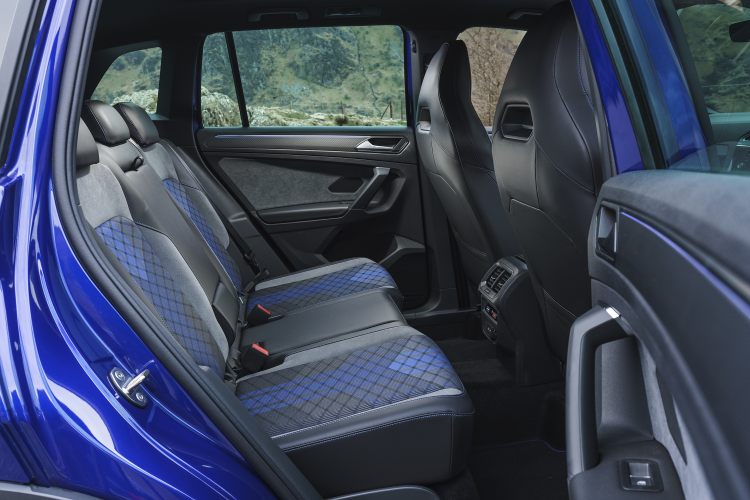 We mentioned it earlier but cabin space is vast on the Tiguan R (and it’s not even an Allspace body, at that), while the boot is ginormous – fully 615 litres of the cargo capacity is available with all 5 of the VW’s seats in play, and there’s up to 1655 litres of the stuff with the 2nd-row seating folded away. On top of that, you get huge door pockets with plenty of room for large drinks bottles, a capacious glovebox, some cupholders secreted away in the transmission tunnel and further odds-and-sods storage solutions. There are also a lot of useful bits of equipment to make life onboard that bit easier, such as 3-zone climate control, keyless entry and go, a powered tailgate with a ‘kick-to-open’ hands-free motion, and Adaptive Cruise Control with Traffic Jam Assist, Stop And Go, among more. 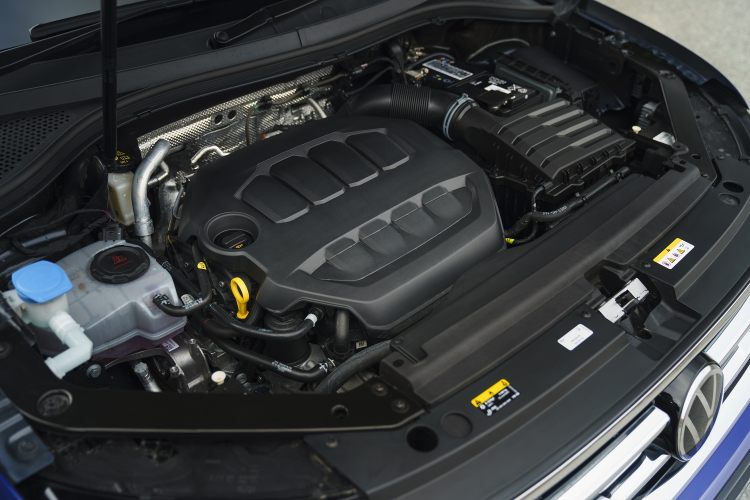 Anyway, at least the Tiguan R comes with lots of kit to mitigate its steep asking price, some items of which we’ve already mentioned – and there are also desirable toys like front and rear parking sensors with a reversing camera, the full Discover Media Nav infotainment system, IQ.Light Matrix LED headlamps, DCC, and a whole wealth of advanced driver assist safety systems to play with. 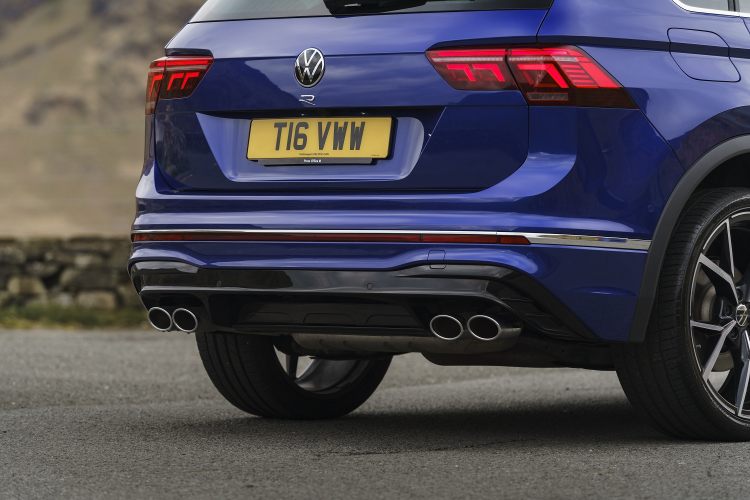 The regular Tiguan R sounds good but, as an approved factory option, you can have an Akrapovic exhaust fitted to make it even racier in the acoustics department. Akrapovic is a highly respected Slovenian manufacturer which specialised in the exhaust systems for motorcycles and racing bikes, before transferring its know-how to 4-wheeled road vehicles. Some of the most vaunted high-performance cars of all shapes and sizes have offered Akrapovic exhausts as upgrades in recent years, so the Tiguan R SUV is an exalted company in this regard.

Has similar stats to the Tiguan R (306hp, 450Nm) from a blown turbo 4, and some of BMW’s long-admired chassis nous thrown in just for good measure.

The car that’s the biggest headache for the Tiguan R. The Cupra has the same oily bits, a better driving experience and is available for less cash. Whoops.

A bit of a left-field choice, given it’s a plug-in hybrid focused on eco-goodness than a hot SUV built for speed, but the Pug has 300hp, 520Nm and a sub-6-second 0-62mph time.

"The Tiguan R is stylish, solidly built, and very enjoyable to drive."

Three Things To Remember About The Volkswagen Tiguan R: