Why Lease the Hyundai Nexo? 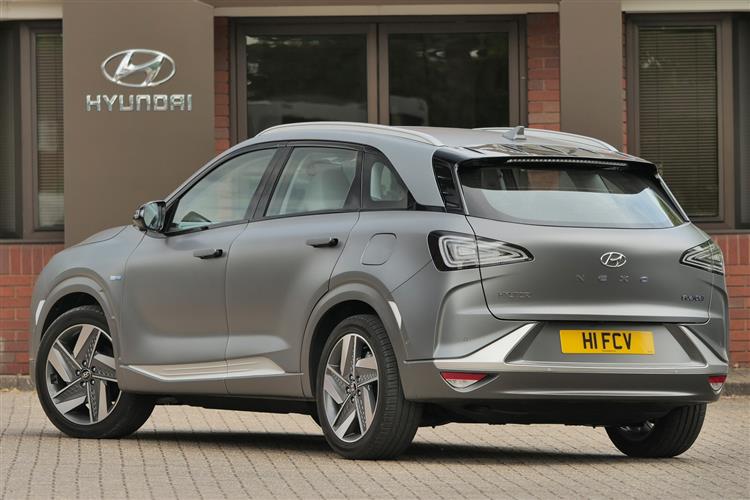 For decades now, we've had a means of propulsion infinitely more eco-friendly than anything electrical. Hydrogen fuel cell models such as this Hyundai NEXO emit nothing more harmful than water and would make far more sense than any EV if they were cheaper and had a better developed fuelling infrastructure to support likely owners. In the future, that'll change. And when it does, this car shows just how ready Hyundai is to respond.

Hyundai, like Toyota, claims to have originated hydrogen fuel cell development. The Korean maker's ix35 Fuel Cell model hit the market back in 2015, about the same time as the Toyota Mirai. Which was subsequently followed by the Honda Clarity FCV, these two cars being market's only other hydrogen models designed to date. The NEXO is certainly well placed to benefit from the upsurge in demand for this technology that should manifest itself when China gets round to delivering on recent promises to dramatically develop its hydrogen fuelling infrastructure. The absence of this in the UK though, means that demand for this Hyundai on these shores will be tiny.

You might imagine that the NEXO drives a bit like an electric car - which is true to a point, in terms of the eerily quiet refinement and the regenerative braking force you can fiddle with to increase energy harvesting and off-throttle retardation. You don't get the surprising initial speed of an EV though and in theory, a hydrogen fuel cell model ought to be a bit more agile because it doesn't have to hump around a load of heavy battery cells. Sure enough, tipping the scales at 1,814kgs, the NEXO is around half a tonne lighter than, say, a Jaguar I-PACE or an Audi e-tron, though to be frank, it doesn't feel like it. Hopefully, future fuel cell models will handle a little more sharply than this. The powertrain's built around a fuel cell of Hyundai's own design comprising of a cathode, an anode and a polymer electrolyte membrane. This sits beneath the bonnet generating energy for a 161bhp electric motor that drives the front wheels and is also boosted by a 1.56kWh lithium-ion battery that harvests energy from the regenerative braking system. Performance, which sees 60mph crested from rest in 9.5s en route to 111mph, is sufficient but unremarkable (an I-PACE, say, would sprint to that figure in half the time) and the car rather runs out of puff once you approach the legal limit. Of more interest to an eco-minded potential operator is the news that the NEXO 'cleans the air around it' as it drives, its air filtration system removing particles down to the level of PM 2.5.

Hyundai, unlike its rival Toyota, has decided to clothe its fuel cell technology in the fashionable shape of an SUV. The NEXO is slightly bigger than its battery-powered Kona Electric showroom stablemate but, at 4.67-metres long, still not much larger than something like a Volkswagen Tiguan or a Volvo XC40. The styling's quite sleek in a conservative kind of way, with a rising belt line and a falling roof line. Aerodynamics have been prioritised, even in the shaping of the 19-inch wheels, and there's a completely flat underbody, plus door handles that retract into the bodywork after 5 seconds, or when you drive above walking speed. Take a seat up front and it's like no Hyundai you'll ever previously have sat in - and not only because of the liberal use of sustainable materials, like sugar cane, bamboo and vegan leather for the seats. A high-rise centre console that's absolutely peppered with buttons incorporates a big central touchscreen full of hydrogen-bespoke graphics and menu options, navigable via touch, a lower dial or various buttons. The instrument binnacle gauges are (naturally) digitally displayed on a further screen you view through the curiously shaped two-spoke wheel. And soft-touch rubbery plastics and little touches like the drilled metal speaker grilles do their best to impart the intended premium ambiance. In the back, there's 740mm of legroom and 930mm of headroom, respective figures that, to give you some perspective, are a little more and a little less than an Audi Q5. The 461-litre boot capacity though, is some way off the class standard, inevitably compromised by the large battery beneath the cargo area floor.

If the difficulty of refuelling this NEXO didn't put you off owning one, the £70,000 asking price very well might. That was certainly the case with this model's direct predecessor, the ix35 Fuel Cell model, which found only 17 buyers. Hyundai's expecting to do a bit better than that this time round in the UK - but not much. For the time being, the NEXO is more a statement of intent, with profitable potential for the brand in markets that have already fully invested in a hydrogen infrastructure (like Norway and the Netherlands) as well as in others about to do so (like Germany and China). At least you won't find the process of market comparison too taxing. For the time being, there's actually only one other hydrogen fuel cell car on sale in our market, the Toyota Mirai, which costs about the same. There's only one trim level available - 'Premium SE' - and it includes just about everything you might want. Including heated and ventilated seats trimmed in vegan leather, a (rather small) sunroof, a premium Krell audio system and a full suite of infotainment features, including navigation and 'Apple CarPlay'/'Android Auto' smartphone-mirroring. Plus there's lots of safety kit, including not only autonomous braking, forward collision warning and lane keep assist but also a 'Blind-spot View Monitor, which when you flick an indicator, uses cameras to show live images of what's in your C-pillar blind spots via the instrument display. 'Level 4' so-called 'mind off' autonomous driving is apparently possible using the combined safety camera set-up, but current UK legislation doesn't allow for it.

Like its direct rival, Toyota's second generation Mirai, the NEXO's hydrogen fuel load is split between three tanks rather like scuba diving cylinders, positioned either side of the rear axle. These can be topped up via a port above the rear wheel arch and store up to 6.3kg of hydrogen at a pressure of up to 700 bar. That's fractionally less than the capacity of a MK2 Mirai, as is the driving range, WLTP rated at 413 miles (27 miles less than that Toyota). The stored hydrogen is channelled through a fuel cell stack together with oxygen from the ambient air, creating a chemical reaction that generates only electricity, heat and water, the latter exiting through an exhaust tip positioned below the rear bumper. A hydrogen refill takes about the same amount of time as filling the tank of a conventional combustion engine petrol or diesel model - around five minutes. That's the good news. The bad news is that finding a hydrogen station to facilitate that process is likely to be a challenge. At the time of writing, there were just 16 operational hydrogen fuel stations in the UK, with six more being planned. Those already operational are mainly located around London and the M4 corridor, but there are also stations near Sheffield and Birmingham, plus two in Aberdeen and one on Orkney. There are plans to increase the number of available stations to 65 by the year 2025. The sat nav system can show you how far you can expect to travel on your remaining fuel level. And when you're running low, it can guide you to the nearest filling station.

Forget electric cars: the vehicles your children will one day be driving will be hydrogen fuel cell-powered. Hopefully for the sake of our planet anyway. Would that the motor industry had ignored short-sighted governmental pressure and dispensed with its current electrified era, one that in many respects simply moves the automotive polluting point back to smoky power stations. By 2025, things might look a little different, even in the UK. By then, if promises are kept, there'll be more than four times as many hydrogen filling stations here. And Hyundai promises that thanks to the development programme it plans with Audi, future fuel cell cars will be around 30% cheaper. Until then, in this country at least, cars like the NEXO will for most of us remain little more than an interesting technological showcase. And a damming statement of where the motor industry really ought to be.