Why Lease the Mercedes-Benz GLC Coupe? 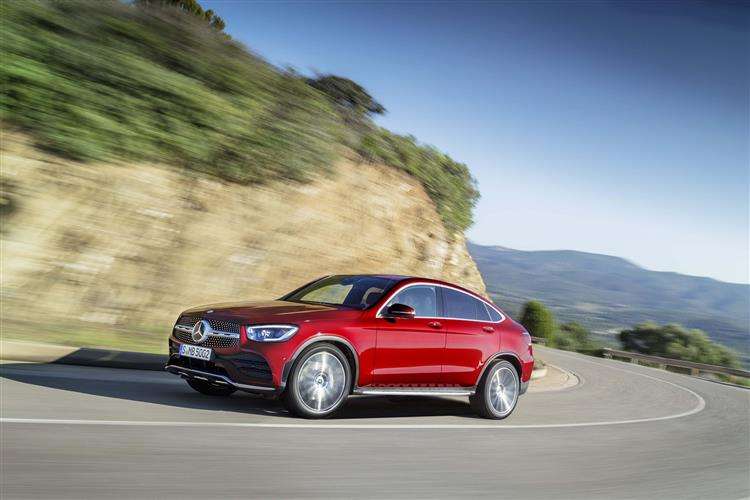 The Mercedes-AMG GLC 63 4MATIC+ is the quickest mid-sized SUV you can buy. Jonathan Crouch takes a look at the revised version.

The SUV segment is a profitable niche for car makers - and the high performance end of it even more so. Here's a revised version of the model that claims to rule the mid-sized part of that segment, the thunderous V8-powered Mercedes-AMG GLC 63.

No other brand has more experience in high performance SUVs like this one, the Mercedes legacy in this market niche dating back to 1999 and the fast but rather wayward ML55. The company's AMG tuning division in Affalterbach has got rather better at producing go-faster versions of Mercedes products since then - they're now good for corners as well as straight lines - and it really shifted up a gear with the introduction of the 4.0-litre V8 we first saw in the AMG GT performance sportscar in 2014. Since then, that twin turbo engine has been fitted into a variety of Mercedes-AMG products, including the C63 and E63 models that share much of their engineering with this top GLC. Here, it can put out as much as 510hp and a thumping 700Nm of torque, that latter figure enough to embarrass this car's most direct segment competitors, the Porsche Macan Turbo and the Alfa Romeo Stelvio Quadrifoglio. Quite a prospect. Let's put this car to the test.

The world may not need a mid-sized SUV with around 500hp, but you might - and if you do, then this Affalterbach-engineered AMG model is a tempting lottery-winner's confection. It uses much the same 4.0-litre twin turbo V8 that you'll find in the AMG GT sportscar, which aurally is on another level from the V6 engines you'll find in direct rivals. Here, this powerplant puts out either 476hp or 510hp, depending on your choice between standard or 'S'-spec versions of the two body styles on offer, the boxier 'SUV' variant or the trendier 'Coupe' body shape. Whatever your preference, you get 4MATIC+ 4WD and a 9-speed 'AMG SPEEDSHIFT MCT' auto gearbox with an in-built 'RACE START' function. Use this and your kidneys will be thrust to the back of your rib cage as this car hurls itself forward from rest, reaching 62mph in just 4.0s in the standard GLC 63 - or 3.8s in the GLC 63 S model. But this car has more to offer than just straight line speed. Depending on the engine, up to six drive programs are now available with this revised model: "Slippery", "Comfort", "Sport", "Sport+", "Individual" and (on the 'S' model) "RACE". Intuitive cornering assistance is delivered by the standard rear limited slip differential, which is mechanically-operated in the standard GLC 63 and electronically-driven in the 'S' variant. The steering's more feelsome than we were expecting it to be too - though the rack still doesn't have the feedback you'd get from a rival Porsche Macan Turbo. Three-chamber air springing and adaptive adjustable damping comes as standard, but it's a very firm set-up, even if you keep the car in the softest of its three available damping modes. Potential buyers will have to decide whether or not they can live with that. As usual with a Mercedes model, there's a 'DYNAMIC SELECT' driving modes system that allows you to tweak steering feel, throttle response, gearshift timings and the throaty sound of the optional AMG performance exhaust.

Get one of these bearing down in the fast lane upon you and you'd scuttle over pretty quickly. Whether you choose your GLC 63 in this SUV guise or in its alternative Coupe form, it's a mean-looking beast. The lesser V6-engined Mercedes-AMG 43 4MATIC model could easily be mistaken for an ordinary GLC with sporty 'AMG Line' trim, but from a glance at this V8 variant, you know you're dealing with a different thing entirely. Especially in this revised guise, which features highlights and tail lamps, smarter twin tail pipe trims and the option of huge 21-inch wheels. Otherwise, things are much as before. The wide 'jet wing'-inspired front apron with huge lower corner finned cut-outs is one component in this '63' model's visual differentiation from the less GLC '43' model, but the main thing that enhances this '63' variant's added status is a distinctive styling feature that until recently was reserved for the AMG GT sportscar - the 'Panamerica' front grille. And at the wheel? well if you're wavering between this car and Affalterbach's more conventional C 63 model, then this is where the GLC V8 will probably sell itself to you. You know of course that this SUV's high-set stance will put it at a disadvantage to an ordinary performance saloon or estate when it comes to weight transfer and cornering agility, but somehow, it's hard to resist the allure of such a commanding driving position. This revised version gets an AMG version of the more advanced MBUX infotainment system and, on the 'S' model, a smarter new AMG steering wheel with touch-sensitive controls. There's more space in the back that you'd get in the C 63 Estate model that the magazine experts will recommend you choose instead - and more boot room too, with 550-litres in the SUV and 500-litres in the Coupe.

Of course, you won't be expecting a car of his calibre to be inexpensive - and this one is predictably pricey, the base 'GLC 63 4MATIC+' version requiring a £75,000 budget in standard 476bhp guise. But why would you want that when just over £11,000 more would get you the uprated 510bhp 'GLC 63 S 4MATIC+' model with 510hp and 700Nm of torque, enough - just - to give you the power-bragging rights over any upstart rival. Add in a few well chosen extras to this variant and you could easily be looking at pushing its £86,000 asking price up to around £90,000. If you want something even more fashionable than this standard bodystyle, Mercedes also offers this same car in both its forms with the GLC Coupe bodyshape, for around £2,500 more. Either way, you're probably going to be looking at paying around twice what you'd have to find for an ordinary entry-level diesel-powered GLC model. Still, if you've developed a brand that's built itself a reputation for creating some of the world's most desirable performance cars, then to some extent you can almost name your price when it comes to what they cost.

You won't expect the running costs of a 4.0-litre petrol-powered V8 SUV weighing two tonnes to be inexpensive. Nor are they here. Still, just imagine how bad they would have been with the old-school 5.5 and 6.2-litre V8s that AMG used to use. This GLC 63's twin turbo 4.0-litre V8 is much more advanced than those two old-school engines and on a long easy highway cruise, you might actually be surprised at just how many miles you can get out of it before there's a need to brush your brogues on a filling station forecourt. Let's get to the figures, which see the standard 476hp SUV model on 19-inch wheels return 24.4mpg on the combined cycle and 265g/km. For the Coupe, the figures are only fractionally altered - 24.6mpg and 262g/km. The readings you get for the 510hp 'S' model aren't much different and vary mainly because of this variant's inclusion of larger 20-inch wheels. For the SUV 'S' derivative, you're looking at 23.7mpg and 270g/km. For the 63 S Coupe, the figures are 24.1mpg and 267g/km. Whatever the version chosen, these readings combined with the 66-litre fuel tank would give you a motorway range of about 400 miles - which is poor without being embarrassing. Of course, away from the motorway, you'll probably struggle to get anywhere near these figures if you use this car as its designers intended. And should you ever take it on a track, you'll probably struggle to average 10mpg.

Critics of course are lining up to snipe at this car for its weight, its prodigious thirst and what in their eyes is a misguided sense of automotive fashion. It tries, they'll tell you, to be five cars in one - SUV, estate, performance sportscar, luxury saloon and, in its alternative form, coupe as well. Yet ends up hitting none of these marks satisfactorily. To some extent, that's true, but it's quite a thing to watch this model strive to reach such an impossible objective. And get surprisingly close to meeting it. Whether it's worth paying double the cost of an ordinary GLC to enjoy such a performance is a decision only you can make. Perhaps the bigger picture here though is that in a world of eco technology and global warming, the days of the big V8-powered SUV must inevitably be numbered. If funds permit and you like what Mercedes has tried to do here, we'd suggest that you buy one - and enjoy it while you can.