Why Lease the Mercedes-Benz GLS? 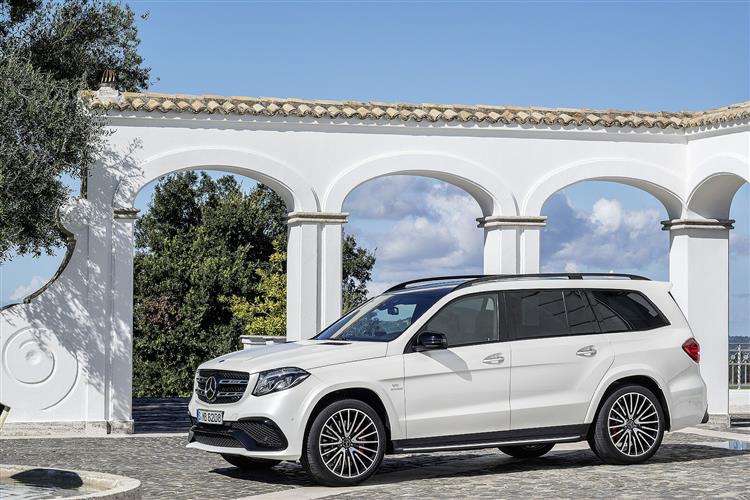 Mercedes-Benz isn't doing things by halves with its AMG-developed GLS 63. This seven seat super-SUV features a 585bhp twin-turbo V8 petrol engine, a £102,000+ price tag and stacks of attitude. It's a tiny seller, so let's not get too preachy about its environmental credentials. The automotive world would be a duller place without it.

The Mercedes-Benz GLS is a specialist vehicle. If you want a sizeable SUV with a three-pointed star on its bonnet, most people choose a GLE model. If you're a Russian gangster, you might even be tempted by a G-Class instead. But the GLS? That's something different. Formerly known as the 'GL-Class', it's bigger, more imposing and more expensive than a GLE. Mercedes sells ten GLE models for every GLS and the car we have here makes up just two per cent of GLS sales. Yes, the behemoth AMG-developed GLS 63 might well be a common sight in Dubai but it'll be a whole sight rarer in Dulwich, Dundee and Dudley. Big and fast is a fairly easy thing to do if you throw in a big engine, monster brakes and suspension that would damp a Tokyo skyscraper in an earthquake. This is pretty much what Mercedes has done with the GLS 63, but while the concept is hardly unique, the way Mercedes has gone about executing it is worthy of quiet admiration.

Installed into a Mercedes GLS body, the twin-turbocharged V8 engine turns the vehicle into a two and a half tonne lump hammer with 20bhp more than a Porsche 911 Turbo at its disposal. The 5.5-litre petrol unt is loud and obnoxious but huge fun. The 760Nm of torque it can generate means that there's instant grunt from almost any speed. You get four-wheel drive, naturally, and a Speedshift-Plus version of the 7G-Tronic transmission which helps the GLS 63 step off the line smartly and ram its way through the gears to 62mph in under 5 seconds and on to an electronically-limited maximum of 155mph. It actually handles better than any vehicle of this weight and height has any right to and you can enjoy hustling it along, although you're always aware of its width. It has a natural gait at which it's happy but try to pick the thing up by the scruff of the neck and overdrive it and it soon feels ragged, leaning on its electronic control systems. The GLS never really does the 'shrinking around you' trick like a Porsche Cayenne can, but the 'AGILITY SELECT' transmission modes mean you can have a little fun if you're pushing on, adapting the car to the way you want to drive. Drive it at a more sedate pace and you'll enjoy the refinement of the air suspension and well-calibrated throttle response. It's a monstrously quick car but driving the thing can more often than not can feel like using a thermonuclear device to crack a nut.

The GLS 63 model's AMG styling actually does a reasonable job of disguising quite how big this vehicle is. You get flared wheel arches, 21" AMG five-twin-spoke light-alloy wheels in Titanium Grey, some huge AMG high-performance brakes, a body kit and an AMG sports exhaust system with two chromed twin tailpipes. Most testers agreed that it worked better in dark colours than pale hues, with white best reserved for the Emirates. Although it retains a modicum of off-road ability thanks to short front and rear overhangs, the side sills and liquorice-strip tyres mean that any enthusiastic green laning will trash the alloy wheels in minutes. The interior is nicely executed, with quality materials used throughout. The AMG sports seats are worth a mention. Trimmed in leather, the first two rows are heated while the front seats feature a memory package and massage function. As you might expect of a vehicle of this size, there's no shortage of space. Access to the third row of seats is made easier thanks to electric seat movement. The luggage bay is a decent size too, measuring from 680 to 2300-litres. The dashboard is easy to navigate with two big dials right ahead of the driver with an 11.4 cm colour display between them. A large colour screen for the infotainment system dominates the dashboard. Most of the controls are operated via the metal Controller on the centre console. A multifunction steering wheel in nappa leather is a standard fit, with steering-wheel gearshift paddles and 12 function keys to prod.

The GLS 63 builds on the already impressive specification of the GLS range, but remember that you are spending over £102,000, which is more than £30,000 over and above the price of the otherwise admirable GLS 350d diesel model. Apart from the high-end seating, you also get multizone climate control and the AMG Performance steering wheel which is a multi-function item, trimmed in nappa leather with perforated grip areas, flattened bottom section and silver-coloured gear shift paddles. There's also Bluetooth, a DAB radio, hard disk sat nav, voice control, traffic messages, a 10GB music server and media interfaces for auxiliary, USB and iPod inputs. As standard specification, the GLS gets the usual stability control and anti-lock braking systems as well as the anticipatory safety Pre-Safe set-up. On board are the Collision Prevention Assist (CPA) collision warning system, Active Curve System with AirMATIC (which compensates the roll angle of the vehicle body when driving round bends) and the Attention Assist drowsiness detection system. One of the new GL's innovations and highlights is the standard-fit Crosswind Assist, which helps the motorist if the car is affected by strong crosswinds. It does so through targeted brake actuations, therefore ensuring an enhanced feeling of safety.

Mercedes quotes a figure of around 23mpg on the combined cycle but you'd never achieve that in day to day driving unless you drove the vehicle as if the turbochargers were home to a pair of kittens. If you average 13mpg, it won't be unusual. Now it's doubtful whether that sort of fuel consumption will scare the trousers off someone who can spend over £100,000 on a fast SUV, but consider this. The fuel tank is a 100-litre item which means that you'll probably see around 285 miles of range from the GLS 63. That can get a bit annoying. The carbon dioxide emissions figure is 288g/km, which is again largely irrelevant. Depreciation might well be an issue worthier of some consideration as the market for used cars of this ilk isn't exactly buoyant. Still, there are plenty of family hatchbacks that fail to match the GL63's retained value of 40% after three years and 36,000 miles. It'll still work out at about £2.20 per mile to run over that ownership period.

The Mercedes-AMG GLS 63 is a vehicle that seems tough to make a rational case for. If you need to seat seven, want to go really fast and enjoy standing at petrol pumps while other motorists pretend not to be looking at you and your vast consumer durable, there aren't many other vehicles to touch it. It undoubtedly has presence and is beautifully engineered but there's always that guilty feeling that there's something 'end of days' about this GLS model's excess. This sort of thing isn't sustainable. Were my numbers to come up on the Euromillions this week, I'm not sure how much of a flying fig I'd give about sustainability though. I reckon I could make a case for a car that was the perfect tool for an active outdoorsy lifestyle where I didn't have to rough it any longer. Truth is, I don't know anybody wealthy enough to drop ninety grand on such a plaything, so it's hard for me to judge. Still, you don't need to spend long behind the wheel to understand that 720Nm of torque and 585bhp has a certain appeal.