Why Lease the Mercedes-Benz SLC? 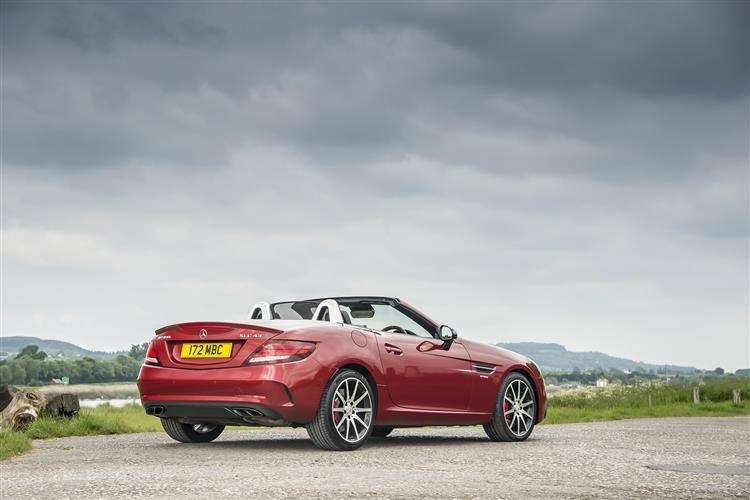 Mercedes' top AMG-engineered SLC 43 lacks a couple of cylinders in comparison to its SLK 55 AMG predecessor - but it makes much more sense as a real world performance roadster. The experts at Car & Driving check it out.

The top AMG version of Mercedes' compact roadster is now badged the 'SLC 43' and it's evolved. Instead of the old 415bhp V8, a 316bhp twin turbo V6 now beats beneath the bonnet, but the car's not a lot slower - and it's a great deal more efficient. Plus it's good looking and smart. What's not to like?

Fast isn't enough. We've done fast and while it's undoubtedly fun, in order to succeed in today's market, a sports car needs more than just sledgehammer acceleration. It used to be the case that a 0-60 time could sell a car, but buyers are now a more sophisticated bunch. Few companies have got with that particular program more adeptly than Mercedes-Benz. Spool the clock back not so many years and you'd find a bunch of AMG models on their books that were quite magnificently overinflated with horsepower but which hardly offered a rounded driving experience. These days the Mercedes-AMG portfolio retains big power but brings with it welcome subtlety and, dare I say it, a measure of responsibility. The Mercedes SLK 55 AMG was the last of a generation of bruisers but that too has been replaced by an altogether more considered car - this Mercedes-AMG SLC 43. AMG hasn't gone soft. It's just become smarter.

First the broadly predictable news. Replacing the old SLK AMG's V8 with the twin turbo V6 of this SLC has led to a drop in power - from 415 to 367bhp. Fortunately, much of that power deficit is hidden by the combination of a 30kg weight saving and the quick-shifting reactions of the mandatory 9G-TRONIC auto gearbox, with the result that the 4.7s 0-62mph sprint time is just a tenth slower than that of the old V8. Plus of course you get much improved economy - and very decent traction too, thanks to the standard limited slip differential. We mentioned the new gearbox: ratio shift timings are one of the parameters you can alter via 'DYNAMIC SELECT', a driving modes system that represents the other key addition to this SLC's roadgoing repertoire. As with most such set-ups, this one also allows you to alter steering feel, throttle response and stability control thresholds, all to better suit the way you want to drive. From start-up, there's a default 'Comfort' setting and from there, you can choose either a frugally-focused 'Eco' mode or more dynamic 'Sport' or 'Sport Plus' options. You can also fiddle with the parameters of the various system elements by altering settings on a further 'Individual' menu. Spend long enough with this and you should find a set-up you'll like.

Upgraded aesthetics on this SLC 43 include 10-spoke 18-inch alloy wheels and an overt AMG body styling kit, along with an AMG boot spoiler. The changes over the third generation SLK this car is derived from are minor, which means that you get the familiar 'long bonnet, short boot' roadster proportions that have long characterised that model line. Inside, the SLC 43 gets an AMG Performance steering wheel with red-stitching for its combination nappa leather and DINAMICA microfibre trim. Otherwise, the look is similar to other AMG Line SLC models Let's also take a moment to consider the SLC's electro-hydraulic vario metal folding roof. It works in just 16 seconds and can be specified with a glass top that comes with a 'MAGIC SKY CONTROL' option that'll turn the panel opaque at the touch of a button to shade the cabin from bright sunlight. Changes allow the roof to now work on the move at speeds of up to 25mph. And with this improved set-up, the boot separator will always automatically be moved into the right position to enable roof functionality. Specify the 'KEYLESS GO' option and the top can even activate from the keyfob. Of course, with the roof down, luggage capacity will be compromised - it's just 225-litres; that rises to 335-litres when the roof is up.

Unfortunately, the SLC 43's biggest problem is pricing that pitches it right into Porsche territory. Mercedes wants well over £46,000 for this car. Still, at least you get plenty of equipment. As well as the styling upgrades inside and out, you get a 'Garmin MAP PILOT' sat-nav, an analogue clock on the dash-top, rain-sensing wipers, heated seats, an ambient lighting pack and a PARKTRONIC system with a reversing camera that'll automatically steer you into spaces. In addition, there's an AMG instrument cluster featuring a 'RACETIMER' stopwatch you might be able to use on the included 'AMG Driving Academy' training session that comes with all Mercedes-AMG models. Also standard are two features that buyers of humbler SLCs will often want to specify as options - we've got them here. One is the 'AIRSCARF' neck-level heating set-up, which uses vents at the top of the seatbacks to jet pleasantly warm air around your shoulders - ideal for roof-down motoring on cold winter mornings. The other is the 'LED Intelligent Light System' which adapts the headlights to traffic and road conditions as you drive. As well as all that, one of the biggest attractions of this car will be its vario electric metal-folding roof, which can now be operated on the move at speeds of up to 25mph - though it's somewhat annoying that you've still briefly got to stop to begin the activation process.

Should you fall for the high speed charms of this top Mercedes-AMG SLC, you might think you'd be punished you at the pumps. You certainly were with the previous V8 SLK 55 AMG model, which managed only 33.6mpg on the combined cycle and 195g/km of CO2. In contrast, the twin-turbo V6 SLC43 improves those figures to 36.2mpg and 178g/km, which means its readings are now significantly better than those of any four cylinder Porsche 718 Boxster. Insurance is group 47. What else? Well, we'll tell you that the comprehensive three year unlimited mileage warranty is built upon by Mercedes' Mobilo scheme which delivers breakdown cover for up to thirty years, as long as you continue to have your car serviced at a Mercedes main dealer. And it's worth knowing that your maintenance outlay can be kept a little in check by going for the optional Service Care package that takes care of routine maintenance, spreading the cost of regular servicing, guaranteeing the price of parts and labour for up to four services and covering the cost of all recommended service items such as brake fluid, spark plugs, air filters, fuel filters and screen wash.

The Mercedes-AMG SLC 43 is a remarkable car. Although the figures might seem quaint in a few years time, right now a V6 sports car that makes 367bhp and which can rocket to 62mph in just 4.7 seconds yet which will still return over 36mpg and emit just 178g/km of carbon dioxide is a quite dizzying proposition. It's also one that should fill us with optimism. Responsibility can be fun too. Although it's a massively improved car in many regards, the latest SLC 43 remains nothing like a Porsche Boxster or, come to that, a BMW Z4. It's a vehicle that serves up plenty of drama but these days it does it without the blunt implement crudity of its predecessors. Its time may well have come.