If your family is growing, then your choice of family car will need to do so too. Not long ago, that state of affairs would have forced you into a rather dull MPV People Carrier, but these days, the outlook for family folk is a little brighter.  MPVs are far more interesting than they used to be – and if you really don't fancy one, there's also the option of various mid-sized SUVs with fold-out third row seats. So where should you start your search? Here are some suggestions…. 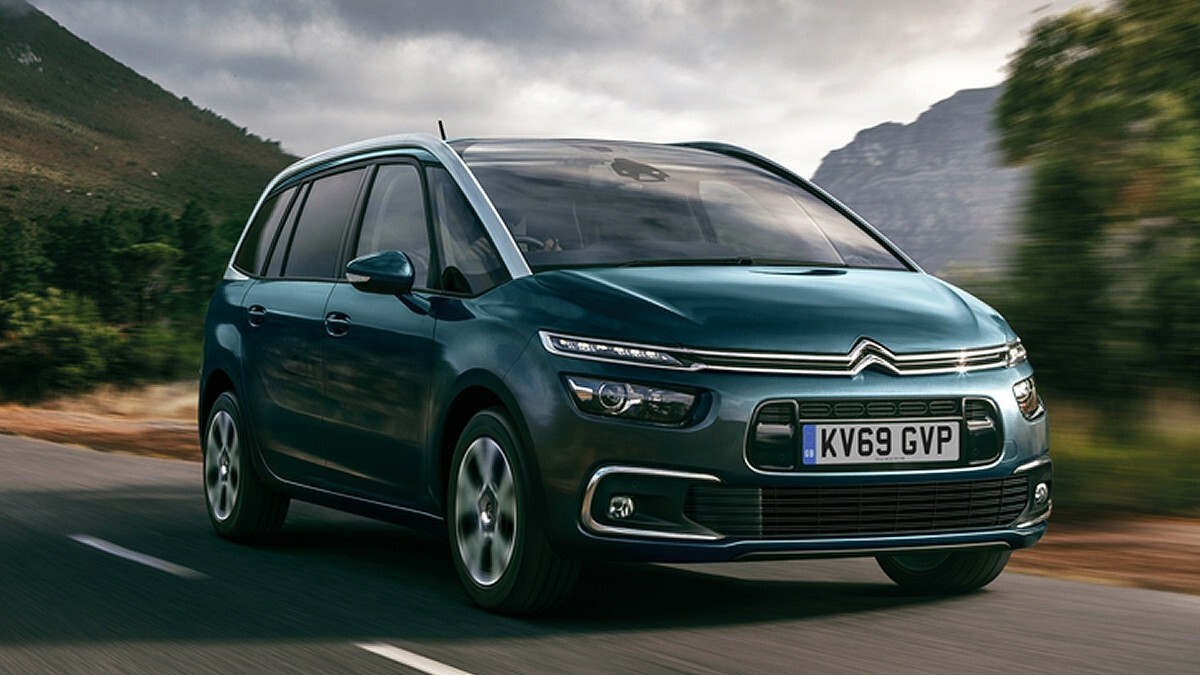 Citroen offers two mid-sized 7-seat MPVs, the Berlingo and this Grand C4 Space Tourer, once known as the 'Grand C4 Picasso'. This Grand C4 Space Tourer has a strong following thanks to clever interior packaging and lots of cabin space: there's up to 793-litres of boot capacity when the third row of seats are pushed right into the floor, a total that can increase to as much as 2,181-litres with the middle row also folded. There's lots of interior flexibility too. The middle row seats can be slid back and forth, reclined or folded flat, independently of each other. And there's underfloor storage compartments, fold-out seatback trays and even the option of a lounge-style front passenger seat that features an extendable foot rest and a massage function.

The engine range starts with a three cylinder 1.2-litre PureTech 130 petrol unit – which is the powerplant fitted to the 'Flair Plus'-spec version that you'll find affordably priced in the Offers section of our site and available for fast delivery. If you want a diesel, there's the usual 1.5-litre BlueHDi 130 unit, or you can have a perkier 2.0-litre BlueHDi 160 diesel option mated to an 8-speed EAT8 auto gearbox. 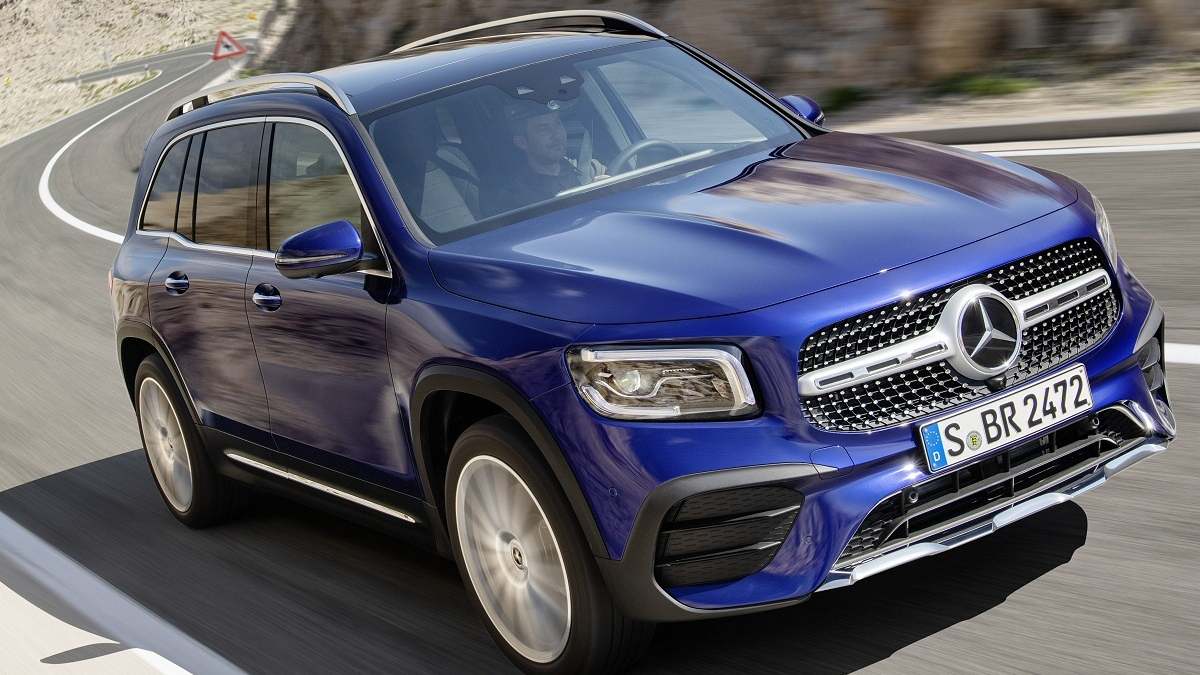 Mercedes offers a huge number of SUVs, eight in total, but we'd venture to suggest that the GLB might be the one that for families, best hits the sweet spot. After all, the Stuttgart brand's entry-level GLA crossover model is only suitable for quite small families. And its mid-size GLC is a little expensive for larger ones – and can't be had with the third seating row that many of them will want. The GLB fits between these two cars and is spacious enough for three rows of seats. It's the perfect premium alternative if you were considering cars like Skoda's Kodiaq, Kia's Sorento or SEAT's Tarraco but wanted a posher badge. For years, Land Rover's Discovery Sport had that niche in the mid-sized SUV market to itself, but these days, this GLB offers that Solihull product stiff competition.

The engines are the same as you'll find in other compact Mercedes models, which means that the starting point in the GLB range is a 1.3-litre petrol turbo unit offered in the GLB 200 model you'll find affordably priced in the Offers section of our website. It puts out 163hp and powers the front wheels via a 7-speed dual clutch auto gearbox. 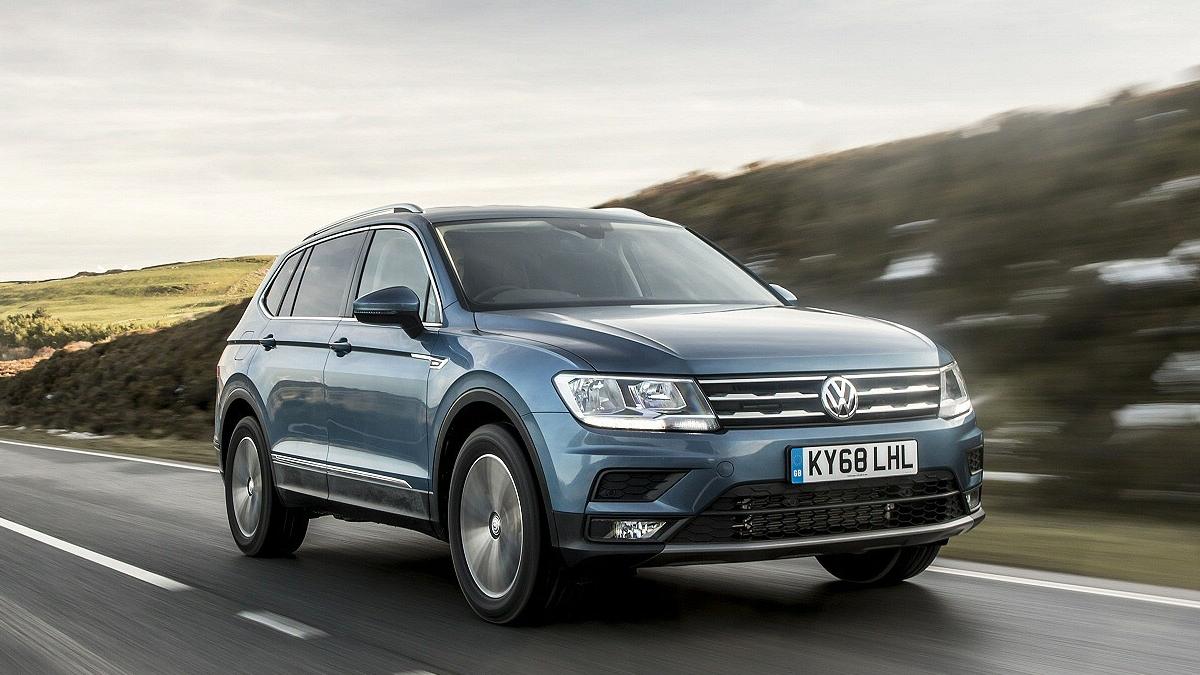 So, a Tiguan – but maybe not perhaps as you know it. This Tiguan Allspace features 215mm of extra body length, enough to make possible the addition of a 3rd seating row at the back – though the pews provided are probably best occupied by kids. This is an important variant for Volkswagen. The standard Tiguan isn't really big enough for the brand to offer in countries like America, but in pumped-up 'Allspace' form, it's a perfect fit as an entry-level SUV for that market, the additional rear inches also freeing up the extra second row room that burly Yankee buyers often need.

The Allspace formula gives you lots of extra boot space too – 700 litres with two rows in place (85-litres more than a standard Tiguan) and 1,775-litres with everything folded. With the third seating row up though, you only get 230-litres. The front of the cabin is exactly like an ordinary Tiguan – and the engine range isn't much different either.

Most who want this model choose the 150PS version of Volkswagen's familiar 2.0-litre TDI diesel engine and you can have that unit within an affordable budget, paired with well-specified 'SEL' trim and a DSG auto gearbox with the version of this car you'll currently find in our Offers section, available for fast delivery. 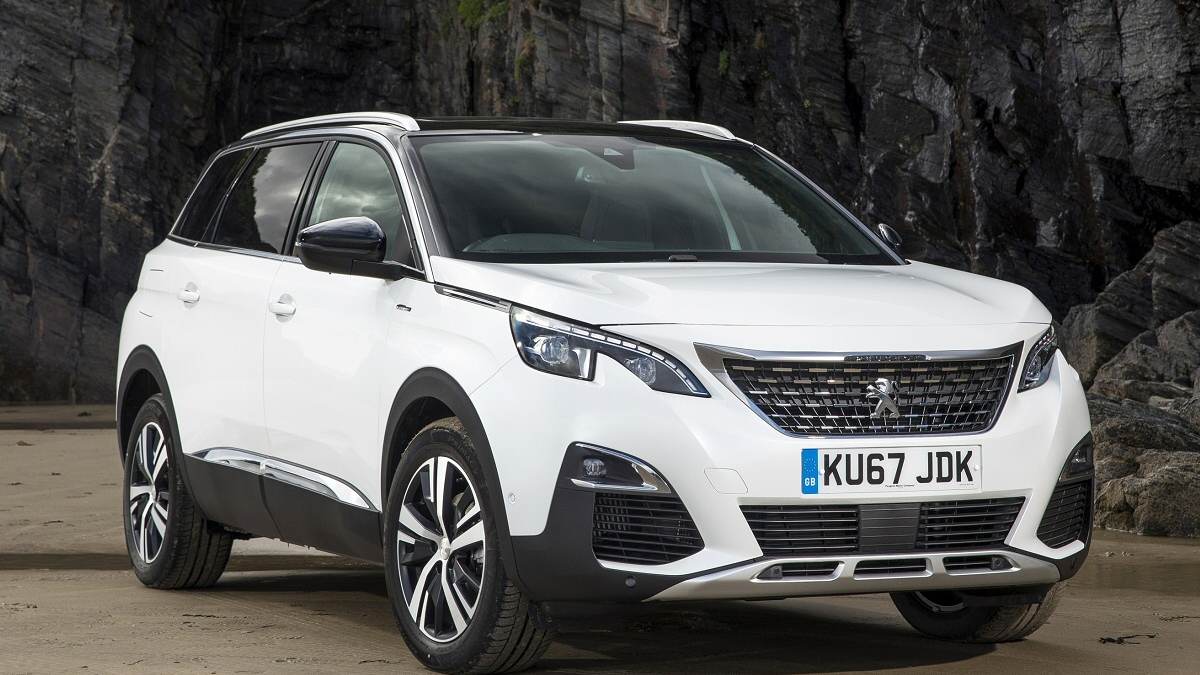 Why would you buy a seven-seat MPV when you could have a seven-seat SUV? That's the question Peugeot wants to ask you here, with this car, their second generation 5008. It's a question the brand sat down and asked itself before creating this model. The first generation 5008, launched back in 2010, was a mid-sized MPV with three seating rows – and a moderately successful one for the French maker. When the time came for its replacement, we expected a sleeker version of the same People Carrying formula. Instead, what we got at this MK2 model 5008's launch in 2017 was this. MPV had become SUV. Peugeot had got in tune with the times.

It's a 7-seat SUV, thanks to a lengthy 2.84m wheelbase and a 4.64-metre length, which explains the  class-leading 1,060-litre boot capacity figure. Under the skin, all the mechanicals are shared with the French maker's 3008 five-seat SUV, including the sophisticated EMP2 platform and all the engines. These include 1.5 and 2.0-litre BlueHDi diesels and a zesty 1.2-litre three cylinder PureTech petrol unit. 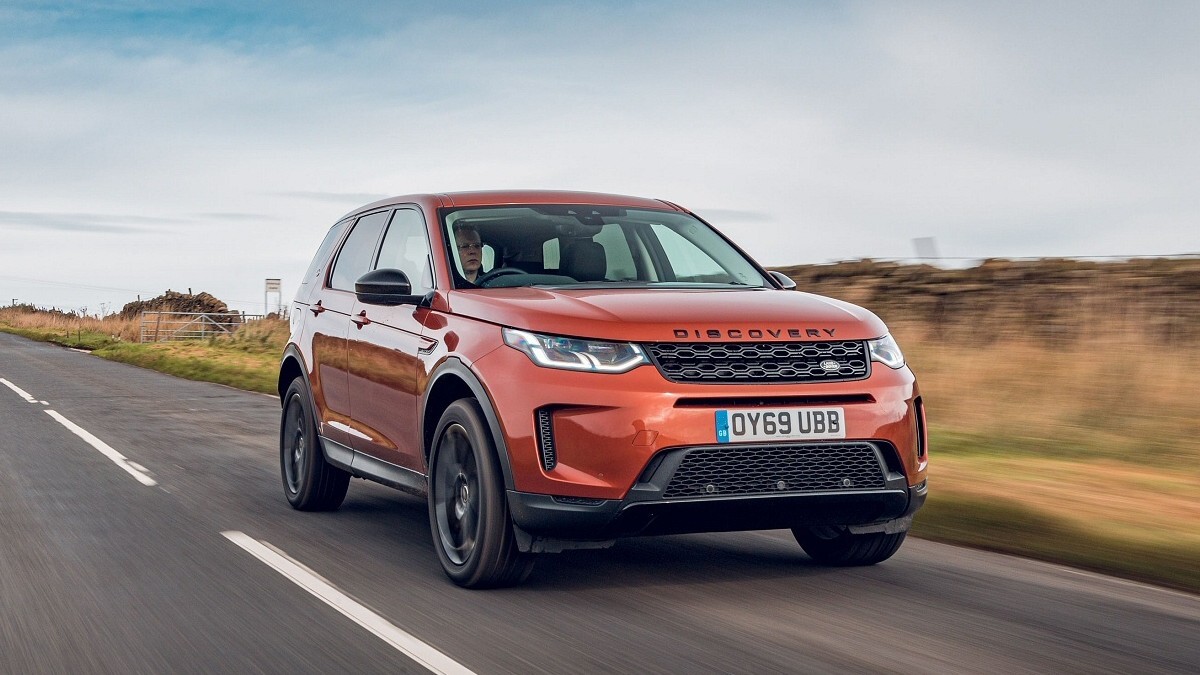 The Discovery Sport is one of the most important models for Jaguar Land Rover, having kept the company going almost single-handed since its original launch back in 2014. Today's version of this car might look very similar to the original model, but under the skin it's very different, thanks to the adoption of Land Rover's latest 'Premium Transverse Architecture' chassis. This has made the body stronger and safer and has also allowed the brand to fit a high-tech range of MHEV mild hybrid engines, plus there's also a plug-in hybrid option too.

inside, the standardisation of Land Rover's Touch Pro infotainment system gives the cabin a much classier feel and the 2nd row seats now feature 40:20:40 split-fold and slide functionality, allowing for more flexible seating arrangement with up to 24 potential combinations. There's more luggage space too; fold all the seats and you can expect 1,794-litres of capacity. As ever with a car in this class, the 3rd row seats are strictly for kids only. 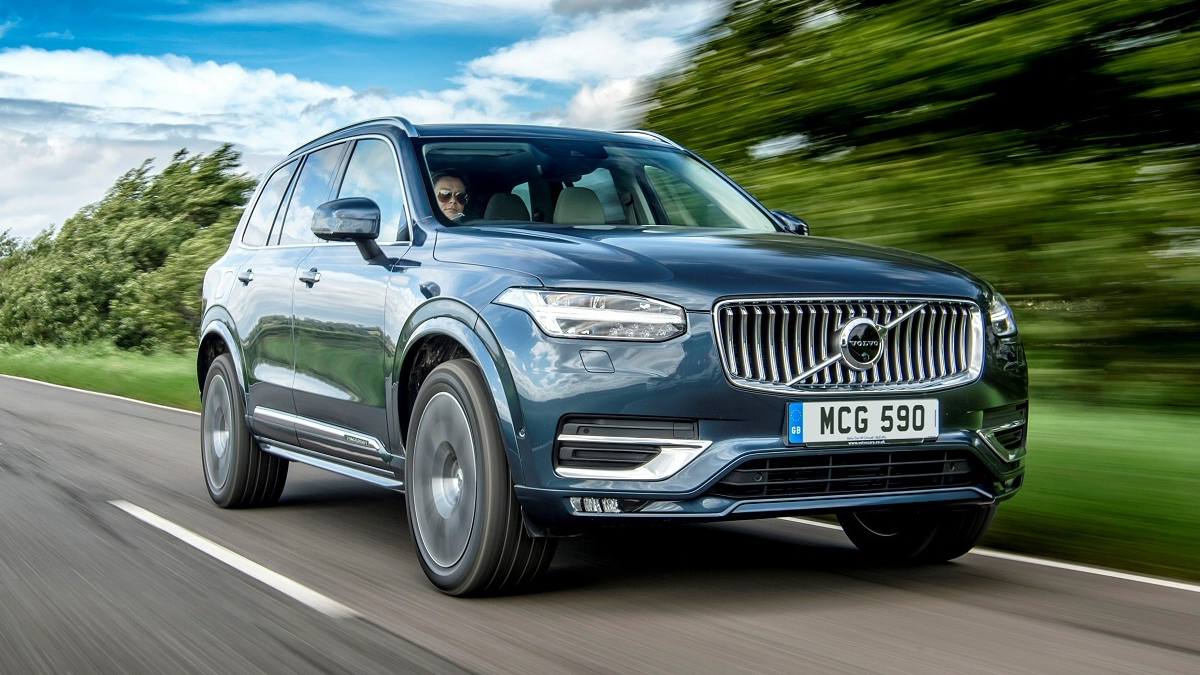 The second generation version of Volvo's XC90 was the car that kick-started the Swedish maker's modern era when it was originally launched in 2014. It was the first of Volvo's models to sit on the company's light, stiff 'Scalable Product Architecture' 'SPA' platform and in 2019 was further updated with a range of mild hybrid engines. Most XC90 customers choose the 235hp B5 mild hybrid diesel, but there are also a couple of mild hybrid petrol models too, the 250hp B5 and the 300hp B6.

At the top of the range is the Recharge T8 plug-in hybrid model, which puts out 386hp but can also give you 26 miles of pure electric driving range when completely charged. You'll currently find very affordable offers on an XC90 T8 on or 'cars' pages – just check our website - and this desirable variant is available for fast, free delivery. All XC90s feel very spacious inside and you get more third row seating room than some direct SUV rivals can offer. 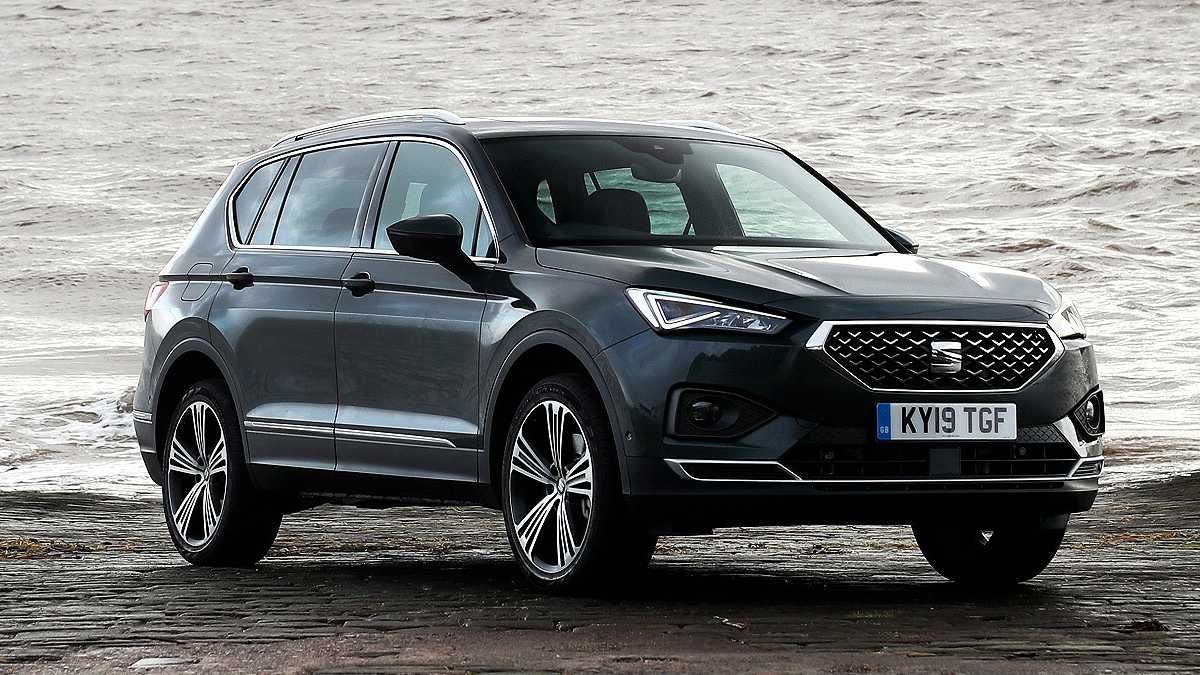 SEAT's Tarraco shares the same Volkswagen Group engineering of its cousins and close rivals the Skoda Kodiaq and the Volkswagen Tiguan Allspace. But packages it all up with a little more Iberian flair. That's the idea anyway. SEAT has also tried to make the handling feel slightly sportier, with sharp steering and supple multi-link rear suspension which can be embellished with extra cost 'ACC' adaptive damping.

Under the bonnet there's a choice of three TSI petrol engines, a 150PS 1.5, a 190PS 2.0-litre and a 1.4-litre PHEV plug-in hybrid with around 30 miles of all-electric driving range when fully charged. There's also a couple of 2.0-litre TDI diesels, developing either 150 or 190PS. Thanks to a long 2.8-metre wheelbase, there's a roomy cabin, which up front features a 10.25-inch digital instrument binnacle and an 8-inch centre dash infotainment screen. Second row seating room is aided by that lengthy wheelbase, but the third row will be suitable for kids only. Out back, there's 700-litres of luggage space, which increases to 1,775-litres when all the seats are retracted into the floor.

Best Cars For MPG
Its all of the best cars for Mile Per Gallon...Read More
Best New Cars Of 2021
With 2020 well behind us, let's look ahead to the best new cars hitting the road in 2021Read More
Best Estate Car To Lease
They best estate cars to lease for your stroage needs...Read More