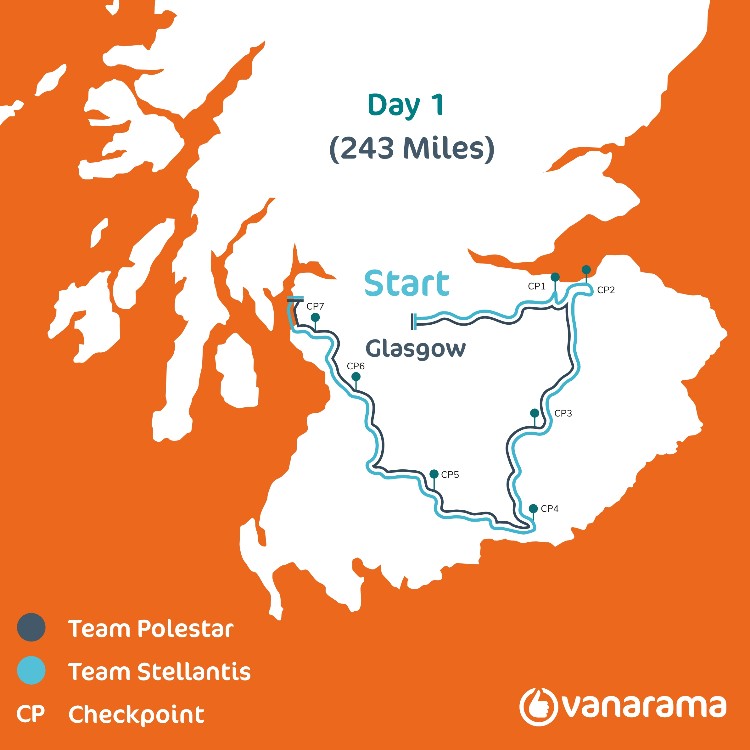 In what might have seemed liked the potentially the easiest day of the 5, with the vehicles taking part in EVROS looping around Scotland’s less inhospitable central-southern terrain, the 1st day of the 2021 event proved to be quite memorable.

For Team 1 in the Polestar 2, a 408hp twin-motor model with a range of around 250 miles on a charge, it was largely plain sailing – save for Mark losing his voice early in the day, that is. The opening stint from the starting point at the Arnold Clark Innovation Centre in Glasgow to Checkpoint 1 at the Forth Bridges Visitor Centre was accomplished with ease and the crew even shunned a good 100kW DC CCS charge at the next checkpoint, at the Wallyford charging hub, in order to press on. Over some of the wilder moorland of Scotland’s southern interior, the weather took a turn from cool but dry to cold and lashing it down, so Team 1 made for the sanctuary of motorway services on the southbound M74, where a charge for the car and some food for the crew was in order – before making the final stints through Gretna Green (Checkpoint 4), the Dumfries & Galloway Hospital (Checkpoint 5) and the final waypoint for the day at the Ayrshire Athletics Arena, only requiring another hook-up at the last of these.

For those of us in Team 2, however, it wasn’t quite as straightforward – but it was all the more fun because of that. Piloting a Citroen e-C4 with around a 200-mile range on a single charge of its 50kWh battery pack, we matched our colleagues to Checkpoint 2 but took on a solid 44- to 81% charge at Checkpoint 2. This took a few seconds more than 26 minutes, giving us an extra 19.61kWh of electricity for a cost of £5.88… and the misguided belief that we might make it all the way to Checkpoint 6 before needing to replenish again. However, the blustery pass over the moors and a photo op at Checkpoint 3 (Glenkerie Wind Farm) really took it out of the Citroen’s distance-to-empty range reading. Having climbed up the A701 to the summit, we had another 30-odd miles to go to Checkpoint 4, with 34 more beyond that to the next chargers at Checkpoint 5… and the computer was saying we had 49 miles left.

What ensued was some careful range management, including turning off the climate control and cracking open the front windows a touch to demist the interior, as well as some hypermiling tactics behind a HGV for nearly 20 miles on the M74. These measures worked, though, because the e-C4 managed to make it to Checkpoint 5 at the hospital… with just 3 miles to spare showing on its battery read-out!

However, we weren’t out of the woods just yet, as the chargers at the hospital were only 7kW AC units and the next stint to Checkpoint 6 was more than 50 miles of night-time driving. Not wishing to face a 4-hour AC charge to make the next leg, we went in search of rapid CCS chargers in the town of Dumfries itself and found 2 nearby units – which were already being used by other competitors on EVROS. Curses!

Luckily, another car park in the middle of Dumfries provided an Evolt charger which accepted our RFID card and glugged 35.7kWh into the Citroen in a respectable 43 minutes and 35 seconds, taking us back to the magic 80% marker where EVs start to charge their battery packs more slowly (in order to protect the battery’s life). That was more than enough to see us arrive at the final checkpoint with half the battery still in play and claiming another 72 miles of driving range. Another quick top-up (12.77kWh, 20m 26s) at another Evolt charger in Kilmarnock town centre finally saw the Citroen replenished to 82% battery and 171 miles of driving range, ready for more adventures (with a different crew) on Day 2. So, with the supposedly easier bit of Scotland done, attention now turned towards the north of the country, with Vanarama’s Team 1 continuing in the Polestar 2, while Team 2 switched to another electric Stellantis product in the form of the Vauxhall Mokka-E. Tune in tomorrow to find out more about how Day 2 of EVROS 2021 went…