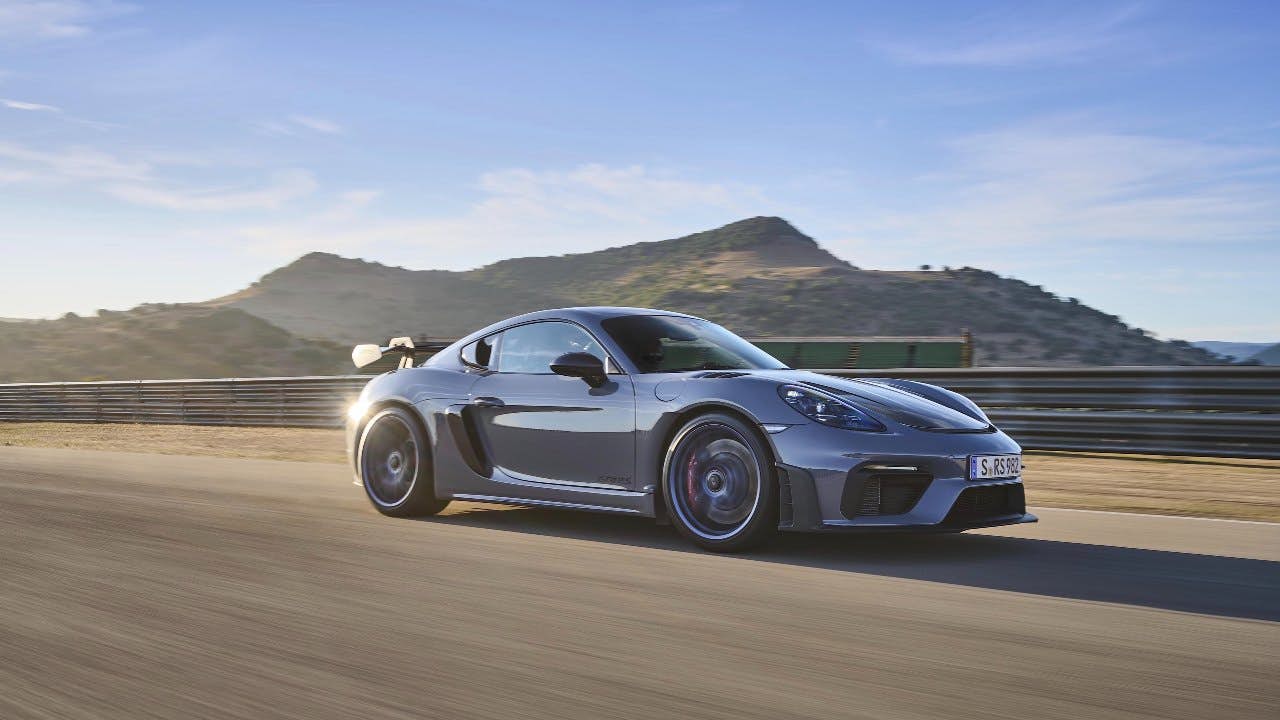 You’re looking at the ultimate in Suttgart desirability – this is the almighty Porsche 718 Cayman GT4 RS and it has been revealed, to much cumulative ‘ooh’ing and ‘aah’-ing from the petrolhead community, over in Los Angeles.

This vehicle will sit right at the very top of the 718 Cayman line-up of cars, surpassing the previous incumbent of the flagship role – the non-RS version called simply the GT4 – in the process. But this is not just a slightly lighter, more focused version of the Cayman GT4, as most Porsche RS models usually are. This time, it has a whole new engine to play with. 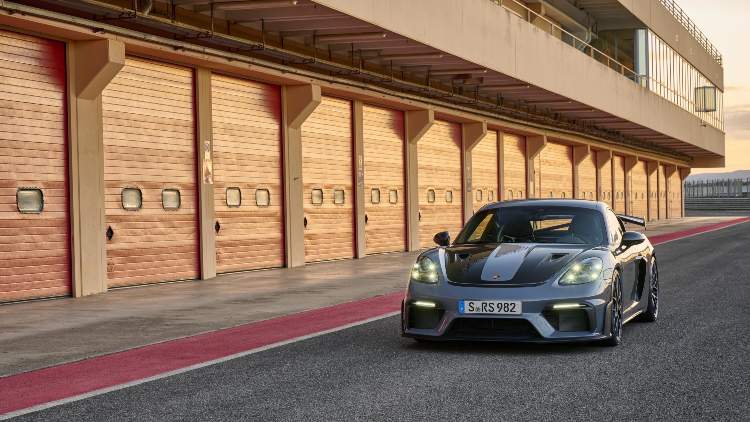 While it has a 4.0-litre, naturally aspirated flat-6 petrol like the GT4, they are in fact 2 very different powerplants. The GT4 employs a derivation of the 3.0-litre twin-turbocharged unit found in the current 911 Carrera models, only it is stripped of its 2 turbos, bored out to 3995cc and then allowed to rev to 8000rpm. Peak outputs are 420hp and 430Nm (with the PDK automatic ‘box, otherwise it’s 420Nm with a manual shift), which you think would be more than enough in a car weighing less than 1.5 tonnes. Especially as a GT4 will do 188mph flat out and 0-62mph in 4.4 seconds in its ‘slowest’ manual format.

But the GT4 RS instead takes its engine direct from the larger 911 GT3, which means a whopping 80hp upswing in output to a 500hp maximum, as well as an increase in peak revs to a spine-tingling 9000rpm. Torque also swells to 450Nm, which is 20Nm up on the equivalent GT4 (as the RS is only available with a 7-speed, dual-clutch PDK transmission, not a manual). 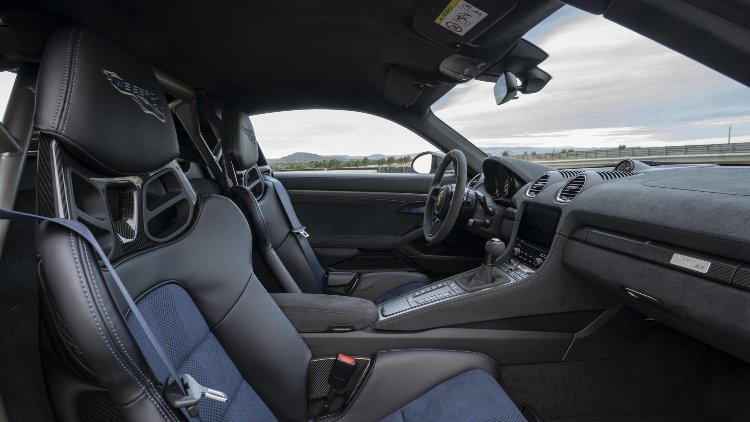 However, in a car which weighs 1415kg – again, that’s an improvement on a GT4 PDK’s 1450kg figure – the performance is truly outstanding. The Cayman GT4 RS will run 0-62mph in 3.4 seconds, which is half-a-second quicker than a PDK GT4, while the top speed increases to 196mph. Not only that, but the RS is an incredible 23 seconds faster around the Nürburgring Nordschleife than a GT4.

Part of this is the aforementioned 35kg weight reduction, which is achieved through the use of a carbon-fibre reinforced plastic bonnet and front wings, lighter carpets and less sound-insulating material in and around the cabin, thinner glass in the rear windscreen, trimmed-back door cards with fabric-pull opening loops and nets in place of door pockets, as well as the extensive use of aluminium to create many parts. 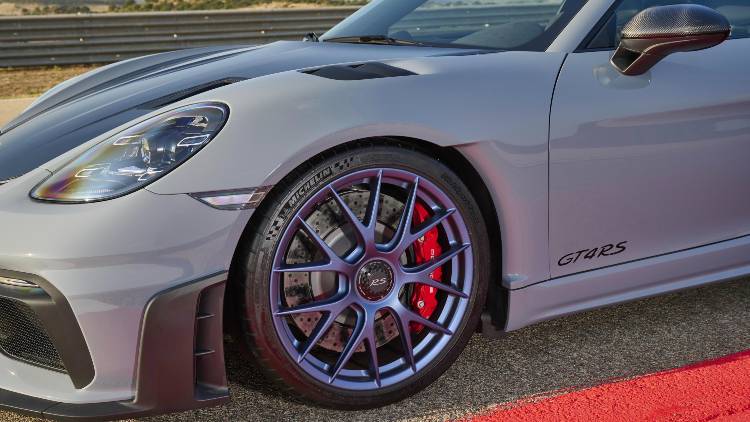 This metal is found in one of the GT4 RS’s most distinctive features, that colossal rear wing. The supports are aluminium and swan-neck shaped, like on the bigger GT3, and the wing is manually adjustable through a few settings, although you’ll need to sort out the front splitter to balance the car up if you start mucking about on the Cayman with your Allen keys.

Other striking details include 2 air intakes for the mid-mounted flat-6 engine that replace the rear-side windows. These not only improve airflow into the 4.0-litre engine, they are sited just 30cm from the driver’s ear and so make the GT4 RS sound truly exceptional, according to Porsche. Having heard the GT4 and multiple GT3s in action, we don’t doubt this bold assertion for a second.

Elsewhere, the air intakes in front of the rear wheels are retained for the RS and serve engine cooling, while the whole car sits 30mm closer to the deck than a standard 718 Cayman. There are vents on the front wheel arches, aerodynamically optimised body styling parts all over the Porsche, and a big rear diffuser that’s almost the same as (but subtly enhanced from) the one on the GT4. 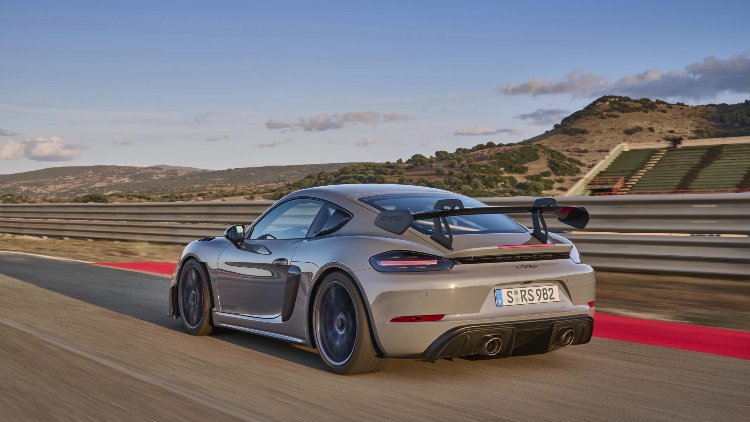 Deeply geeky stuff like ball-jointed suspension and its own tuning of the dampers, springs and anti-roll bar rates sharpen the drive, while overall the RS is said to summon up 25% more downforce in Performance mode than the GT4 it is based upon. This is a serious, serious car, it really is.

But if it’s not quite serious enough for you, then you can take the 718 Cayman GT4 RS further with the optional Weissach Package. Named after Porsche’s favoured development track, this finishes much of the exterior of the car in exposed-weave carbon fibre, while also equipping a set of titanium exhausts with tailpipes that look like those on the Porsche 935. The 20-inch forged aluminium wheels of the ‘standard’ RS are replaced with 20-inch forged magnesium items for even greater weight savings, while a titanium rollcage is fitted into the rear of the passenger compartment. You also get embroidered Weissach logos on the seats’ headrests, a dashboard upholstered in Race-Tex fabric, and a large Porsche emblem integrated into the rear window.!

Finally, if you do sign on the dotted line for a Porsche 718 Cayman GT4 RS, then you have a unique opportunity to also purchase the Porsche Design Chronograph (that’s a ‘watch’, to you and I) which matches the design of the car.

So, the GT4 RS is on sale now. And if you want to own one of these cars, which can do the shorter 20.6km (12.8-mile) layout of the Nordschleife in 7m 04.511s (that’s 23.6secs faster than the Cayman GT4) or the slightly longer 20.832km (12.9-mile) configuration in an equally searing 7m 09.3s, then you’ll need about £108,000 at least to sign on the dotted line. And, given this extraordinary car will probably only go up in value from here, then such huge amounts of money are probably well worth the outlay, if we’re honest.