In a new car market increasingly dominated by SUVs, it's tempting to wonder whether there's really still a place for the classic estate body shape. The brands still offering this enduring station wagon formula though, do it exceedingly well, delivering car leasers the kind of convenience & practicality that comparably-priced Crossovers can usually only dream about. So what's now on offer for today's discerning estate leaser? Here, we're going to guide you through your best options. 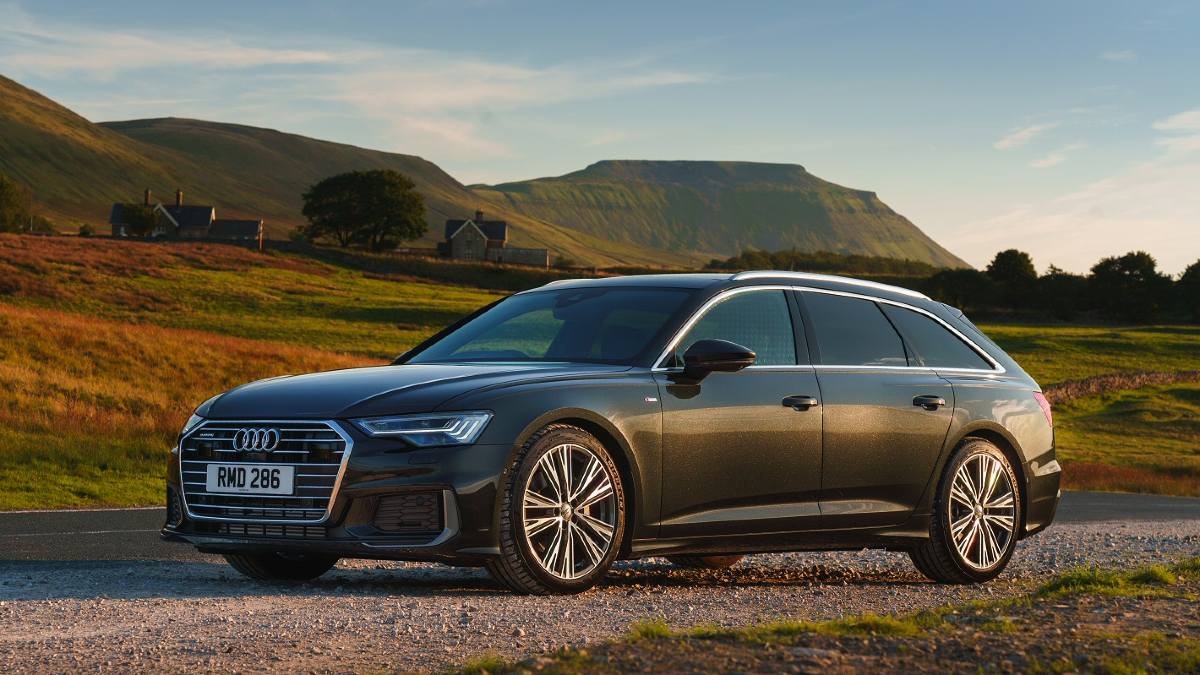 Audi may not be too far ahead of its arch-rival BMW in terms of overall sales but in the luxurious Executive-class estates segment, they comprehensively beat their closest rival. Their A6 Avant out-sells the rival BMW 5 Series Touring nearly two-to-one & is even further ahead of estate versions of other key segment competitors like Mercedes' E-Class & the Jaguar XF. What then, might Audi achieve with a car that's smarter, lighter, faster & greener, yet more cost-effective to run? This one, the fifth generation A6 Avant.

This 'C8'-series A6 design we're looking at here was introduced in mid-2018 & is, as you would expect, a much more modern interpretation of the breed. The petrol TFSI & diesel TDI engines used have become much more efficient thanks to 'MHEV' mild hybrid electrification & the new-era cabin is now completely touchscreen-orientated.

In addition, the sleek exterior styling introduces a fresh design language for this model line & clothes a completely new & much stiffer aluminium-intensive MLB EVO body structure. In terms of the practical stuff, this A6 Avant offers a 565-litre boot, which can be extended to 1,680-litres with the 40:20:40 split-rear bench retracted. 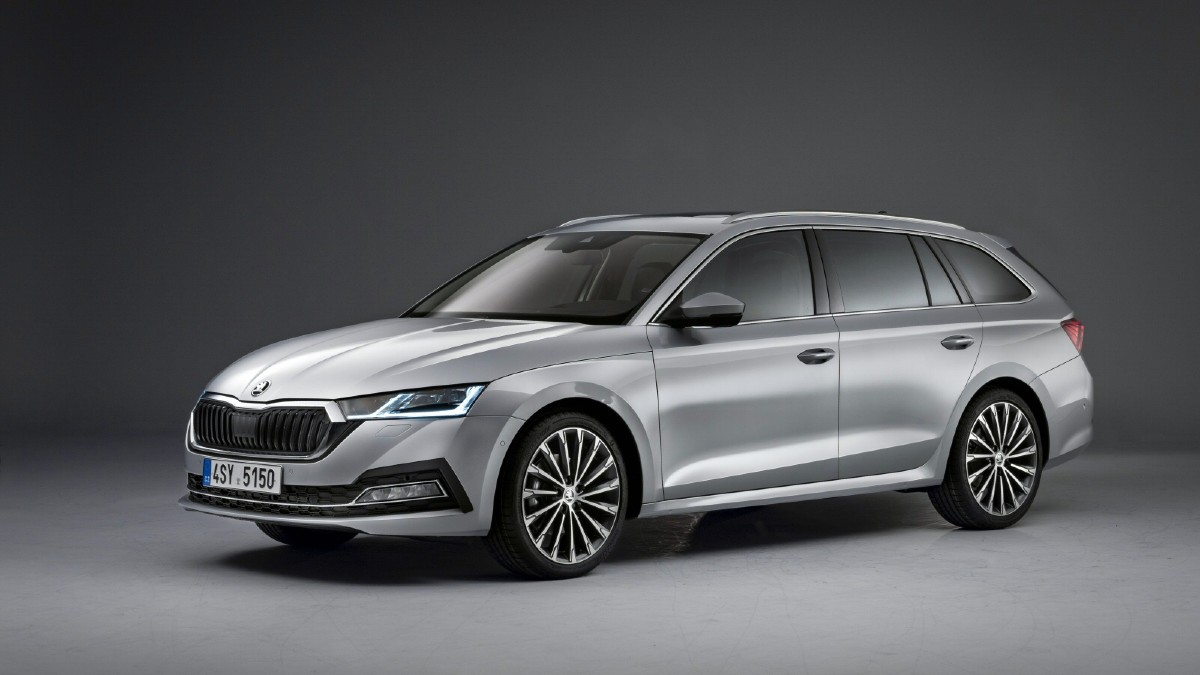 The Octavia Estate has long offered most of the advantages of a large estate with the running costs of a smaller one. This fourth-generation model is the same 4.69m length as the equivalent hatch (which has made this MK4 version 22 mm lengthier than its predecessor) & it's 50mm wider too. That, in turn, has freed up more rear-seat passenger room & the cargo area is 30-litres bigger than before – 640-litres in size before you start retracting the rear bench.

In the past, Octavia estate buyers have prioritised a diesel. This time around, there are a couple of 2.0-litre TDI units, offered with either 115 or 150PS outputs. But Skoda now expects a greater take-up for its petrol power plants; there's a choice of two, either an entry-level 1.0-litre three cylinder 110PS unit or a 1.5 TSI Evo 150PS petrol powerplant. Order either of these two petrol engines with DSG auto transmission & you also get the company's latest mild hybrid technology. 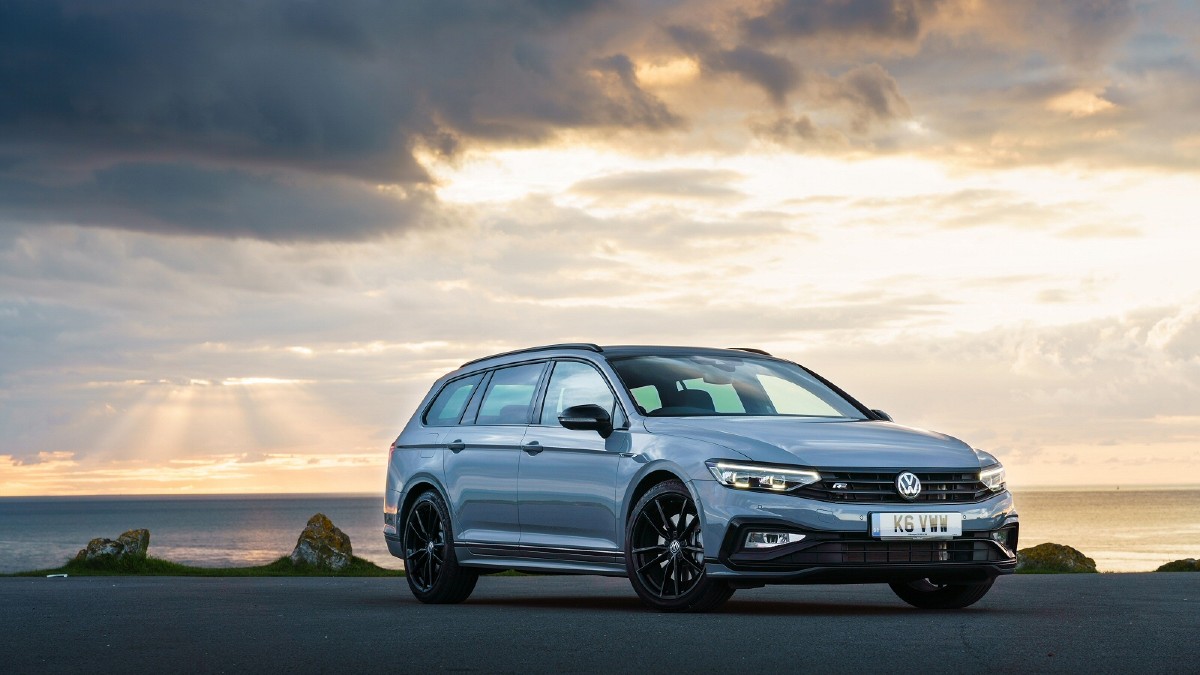 If you already own a Volkswagen Passat estate, it's likely that when you change it you will be buying or leasing another one - most owners do. This is the eighth generation model, which proved to be shorter & lower than its predecessor, & it's been usefully revised in more recent times with minor styling revisions & updated engines.

In terms of practicality, it's hard to imagine how you'd be disappointed. The boot is big, measuring in at 650-litres under the tonneau cover. When you fold the seats down, that capacity increases to 1780-litres.

I mentioned the engine changes – the key one is a new version of the volume 150 PS diesel engine that the majority Passat estate buyers or leasers choose, which is now badged the 2.0 TDI EVO 150PS stop & is now significantly cleaner, featuring active cylinder shut down extra efficiency. 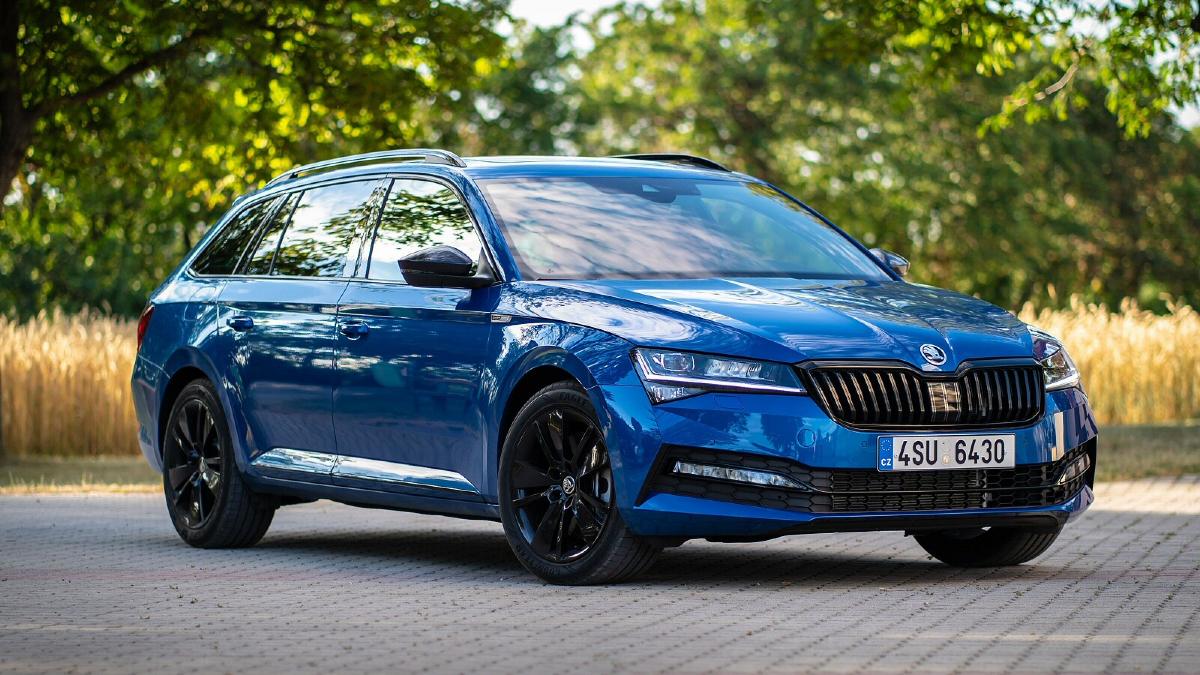 Affordable estate cars don't come much bigger than Skoda's Superb Estate. This lately improved MK3 model has a 660-litre boot with the seats raised; this extends to nearly 2000-litres when the rear bench is folded. That's heading for the kind of capacity you'd get from a big MPV & it's certainly comparable to the kind of capacity you get from a full-Executive-class estate from the next pricier class up.

There's a wide range of engines, the petrol ; line-up starting off with a 150PS 1.5-litre TSI EVO unit, which sits just below a 2.0-litre TSI powerplant with 190PS & another 2.0-litre TSI unit developing 272PS which features four-wheel-drive st &ard.

But most Superb Estate buyers still choose a diesel, either a 120PS 1.6-litre TDI unit or a heavily revised 2.0-litre 150PS TDI diesel unit now badged 'TDI EVO'. Beyond that is a 2.0-litre TDI 190PS variant which can be ordered with the option of four-wheel-drive. It's also possible to choose a plug-in hybrid powerplant which sees a 1.4 TSI petrol engine boosted by an 85kW electric motor & a combined power output of 218PS. We'd recommend the 2.0 TDI CR SE L variant currently available in our 'Offers' section. 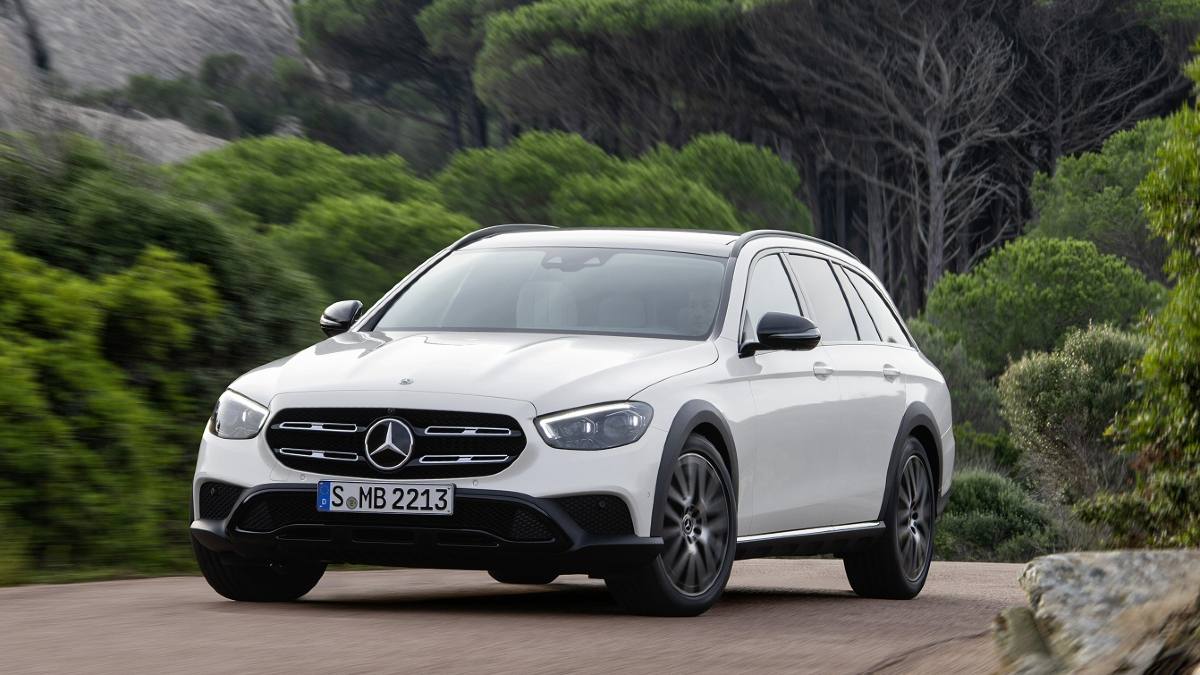 What's the largest & most spacious estate car you can buy? You're looking at it right here. The Mercedes E-Class Estate has always been an extremely elegant way to carry a great deal. Today's version though, a much improved take on the 10th generation design, is also particularly clever & efficient.

As before, it offers absolutely loads of space, with 670-litres on offer with all the seats in place, the biggest load compartment in the segment. It can be extended to 1820-litres when the rear bench is folded. If you need to carry extra people, you can pay extra for the option of a kids-orientated rear-facing folding bench seat in the estate compartment that can make this car a seven-seater.

I mentioned efficiency; electrification has been introduced into this revised MK10 model, with the option of plug-in hybrid technology on both diesel & petrol engines & Mercedes' EQ Boost mild hybrid tech. In the main part of the line-up, the petrol engines range in output from 154bhp to 362bhp, while the diesels vary between 158bhp to 326bhp.

As before, there's a top E 63 4MATIC+ AMG V8 sports model & an off road-orientated All-Terrain variant with raised ride height. In our 'Offers' section, you'll find a very affordable deal on a base petrol E 200 AMG Line Edition version. 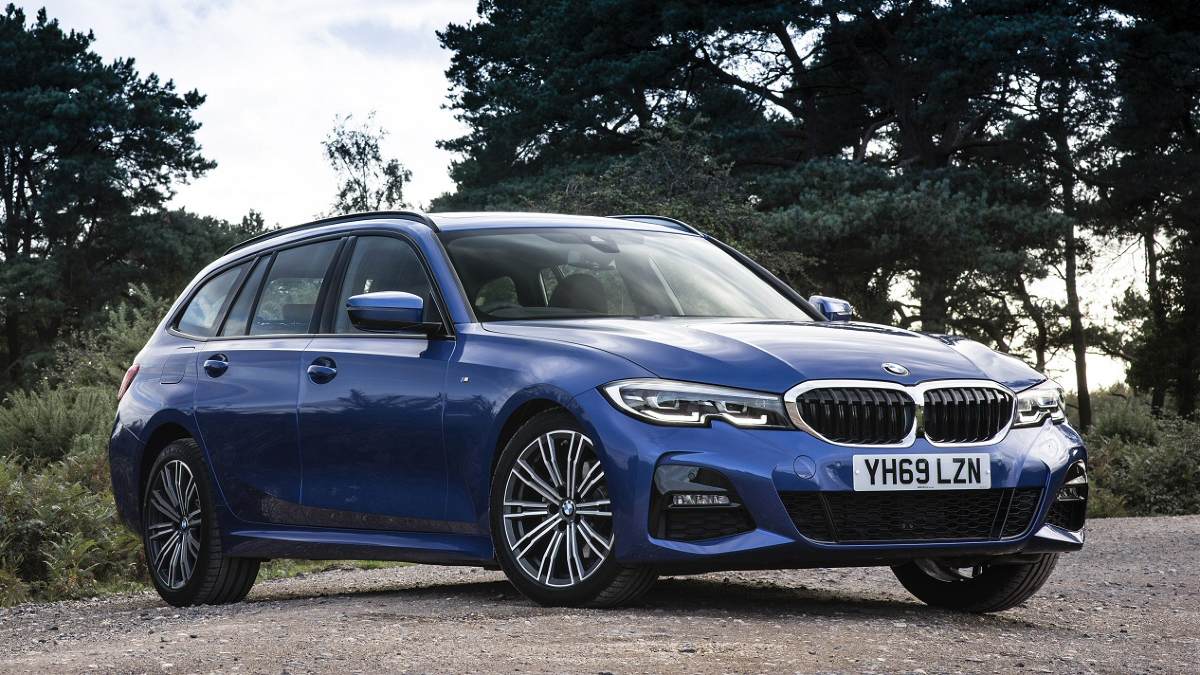 You won't be choosing a BMW 3 Series Touring in search of the ultimate carriage capacity, but this mid-size estate has huge appeal when it comes to style & driving enjoyment. This is the sixth generation 'G20'-series model, which has grown by 76mm in length & 60mm in width over its predecessor. There's a 500-litre boot, which is 5-litres more than the previous generation 3 Series Touring model could offer & 20-litres more than you'd get in the boot of the current 3 Series saloon.

BMW are keen to point out that this time round, the boot is 12mm wider than this model's predecessor & its loading aperture is 30mm higher & 225mm wider. The loading sill is slightly lower too, making it easier to get heavy items in. Retract the rear bench (which is usefully split 40:20:40) & maximum capacity is rated at 1,500-litres.

As usual with a 3 Series, there's a rear wheel drive layout, though the option of xDrive 4WD is becoming increasingly popular. There's a wide range of four-cylinder engines from the br &'s Efficient Dynamics family in a line-up that starts with the 320i, which offers 184hp from its 2.0-litre turbo unit. The same engine also features in the 330e petrol plug-in hybrid model. This same 2.0-litre petrol engine is also available in 258hp form in the 330i.

If you need six cylinder petrol power, you'll need the 374hp engine of the rare M340i. Many 3 Series Touring buyers still want a diesel & the black pump-fuelled range starts with the 318d (which has 150hp) before progressing up to the 320d (which has 190hp). You can find an affordable 320d M Sport auto model in our 'Offers' section. The flagship of the diesel line-up is the 330d xDrive, which offers 265hp. 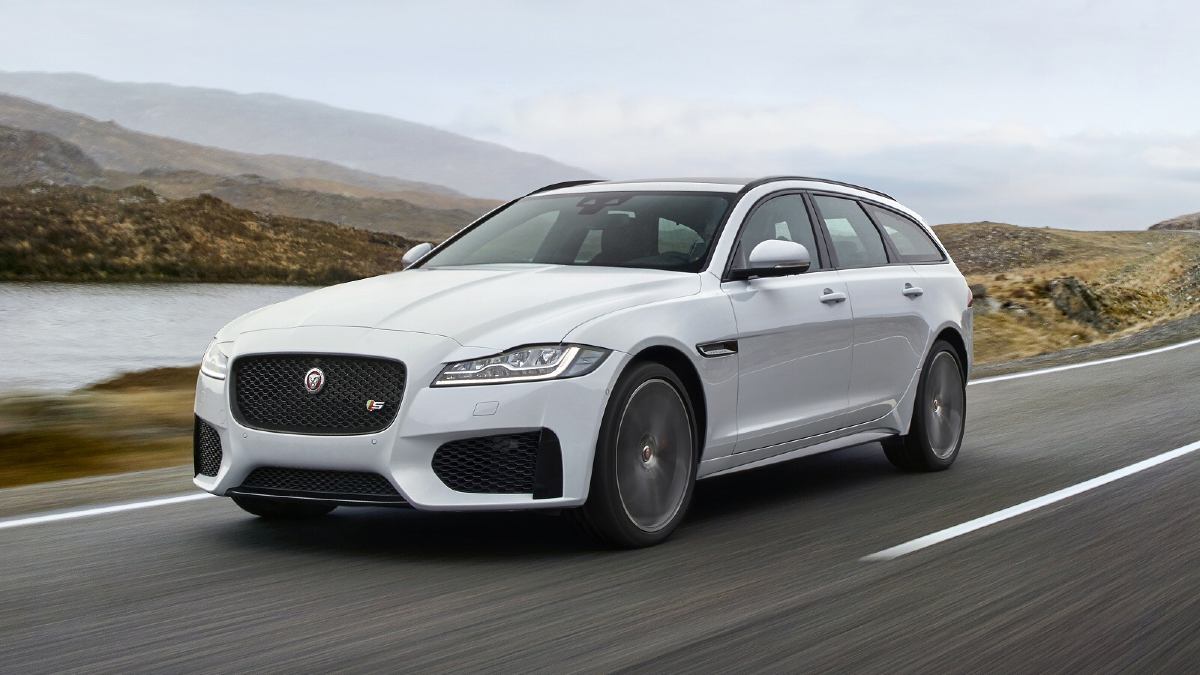 If style is your sole determining factor in choosing a full-sized executive estate, then it's hard, I'd suggest, to look beyond the Jaguar XF Sportbrake. Designer Wayne Burgess is a part-time rock musician who would probably use this XF's extra capacity for sound equipment. He certainly seems to be someone unafraid to go against station wagon convention in designing a car of this kind.

It might be a touch ridiculous to add sports car touches to the equivalent practically-orientated models from Audi, BMW, Mercedes or Volvo. But this Sportbake's fast, sweeping silhouette is different & more dynamic, making its F-TYPE-inspired rear end treatment somehow entirely fitting.

It's decently practical too, the load area featuring 1700-litres of luggage capacity when all the seats are folded down & 565-litres when the rear bench is in place. A load cover protects valuable items from prying eyes & an optional divider net is available to restrain loose items to securing points in the roof lining. Which by the way is where the rear stereo speakers have been re-sited too – another neat touch.

Possibly our favourite lifestyle design feature though, is the optional 'Activity Key', a useful thing to have as you can wear it like a watch, yet open & lock the car just by presenting it to the tailgate. That'll be ideal for those using this car for various outdoor pursuits.

For more motoring news, check out our car blog and, while you're here – why not browse our car leasing deals or latest estate offers.