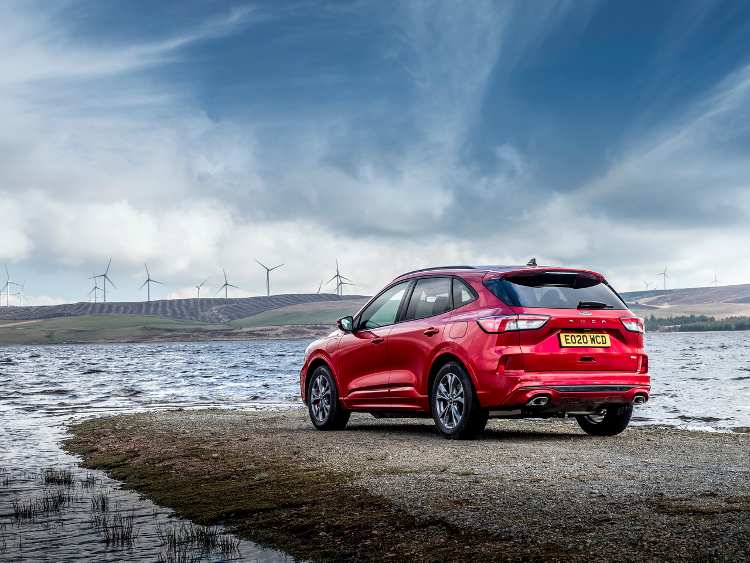 The Ford Kuga is the Ford's midsized crossover-SUV… well, it would be ‘mid’sized, if the company still sold the larger Edge, but as that vehicle was dropped in 2019 in the UK due to slow sales, the Kuga is now Ford’s de facto flagship of this type of machine. Anyway, the Kuga competes in a congested and profitable class alongside the likes of the Nissan Qashqai, Honda CR-V, Vauxhall Grandland, Citroen C5 Aircross, SEAT Ateca, Skoda Karoq and so many more. Indeed, in its grander and more expensive specifications, Ford would probably like you to consider it a roomier, better-value alternative to prestige rivals like the Volvo XC40, BMW X1/X2, Audi Q2/Q3 and Mercedes GLA, to name but a few.

This is now the third-generation Kuga, having originally launched in 2008. It’s arguably the best Kuga so far, though, as it blends some of the chassis verve of the Mk1 with the larger, more refined body of the Mk2, all while eradicating those 2 predecessors’ main drawbacks. In keeping with the modern-day environmental zeitgeist, the Kuga is not offered with a diesel engine at all and 2 of its 3 drivetrain choices are heavily electrified. Pick from a basic 150hp 1.5-litre Ecoboost turbo petrol, or alternatively a 190hp 2.5-litre Duratec hybrid electric vehicle (HEV), or even the range-topping 225hp 2.5-litre Duratec plug-in hybrid (PHEV).

After this, there are 5 specifications, running Zetec, Titanium Edition, ST-Line, ST-Line X and Vignale in order of grandiosity. The petrol is the only drivetrain available at the first 2 of these, with all 3 powertrain choices offered from ST-Line and up. For this test drive, we’re sampling the ST-Line PHEV, likely to be a popular choice due to the tax benefits its low CO2 outputs afford to customers. 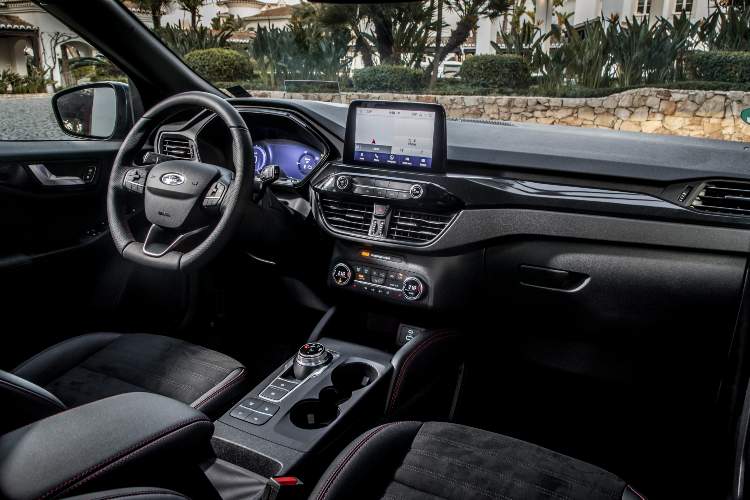 The interior is excellent in the Kuga Mk3. It might not have the straight-up visual design flair of some of its rivals, but the quality of the materials used is up there with the best in class and ergonomically it’s spot on the money. Digital displays dominate on every model bar the basic Zetec cars, with a 12.3-inch digital instrument cluster being the main highlight here. Meanwhile, SYNC 3 infotainment on an 8-inch touchscreen is also pretty decent, if not a sector-defining set-up. Overall, though, the ambience of the Kuga’s cabin is highly positive. 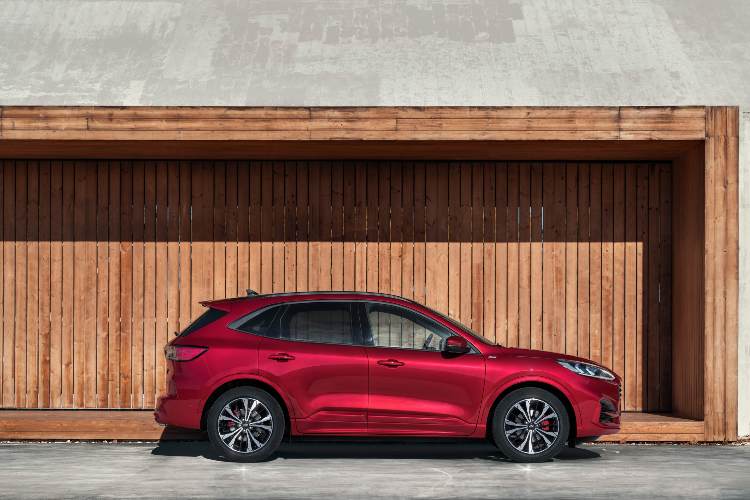 Looks are subjective but there’s a lot of front overhang on the Ford Kuga Mk3, which can make its styling look a little bit gawky. That said, in ST-Line specification, it gets sportier bodywork and it looks particularly good in the £850 Lucid Red paintwork too.

Besides that, it’s an issue of cost. The Kuga range starts at less than £30,000 but the minute you start selecting the PHEV propulsion system and more desirable ST-Line specification or above, the list price begins spiralling well beyond 30 grand in the direction of £40,000. This translates into our leasing costs – you can get into a 1.5-litre petrol for comfortably less than £300pcm, but for a model like ours you’re looking at more like £330pcm-plus. 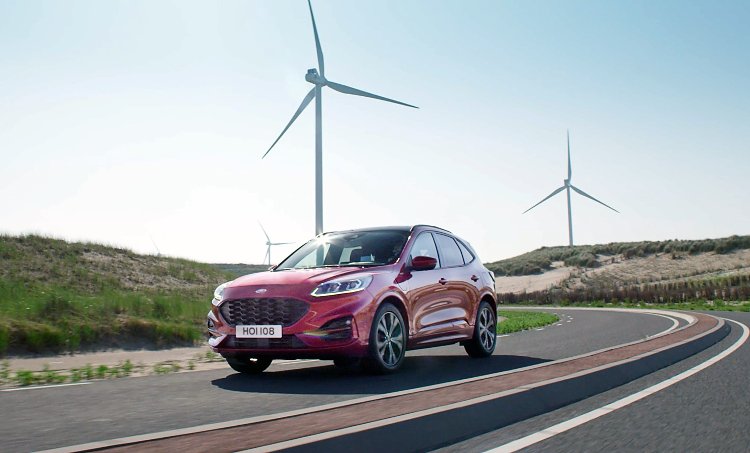 Ford knows how to set up a good chassis, whether that be for a dedicated performance car or not, and the Kuga Mk3 is no exception to this rule. While it might not be the best-handling crossover-SUV in this class, especially as the heavier PHEV model (it weighs a meaty 1773kg in this specification), it nevertheless has more feelsome steering, better body control and a sense of chassis sparkle that many of its competitors do not. You could probably match the excitement the Ford serves up to its driver if you went for a SEAT Ateca or Peugeot 3008, but everything else feels stodgier than the Kuga.

The flipside is that the Ford can have a firmer ride than many competitors, especially as an ST-Line which comes with Sport suspension, although overall it ranks as a comfortable and refined crossover-SUV. It manages to smother out most lumps and bumps in the tarmac with reasonable aplomb, while its high-speed ride is controlled and smooth. There’s also a bonus in terms of noise levels with the PHEV model, which can ‘drop’ its petrol engine and run on pure electric power more often than you might expect from a plug-in. This makes the Kuga incredibly quiet to travel in, as the suppression of both rumbling tyres and wind buffeting about the cabin is first-rate.

Even the drivetrain in the Kuga is impressive, this despite the fact the PHEV has an efficiency-biased Atkinson-cycle 4-cylinder petrol, allied to a continuously variable transmission (CVT). This particular technical combination has the propensity to make really grating sounds from time to time, as we’ve tried it in various other hybrids over the years and they’ve been terribly rowdy when near maximum revs. But the Kuga does not fall into this trap, with the engine proving itself to be quite cultured in the main. Further, boasting 225hp and a peak of 200Nm (from the petrol engine), with no maximum petrol-electric torque output quoted by Ford, the Kuga PHEV feels strong for performance – a 0-62mph time of 9.2 seconds is middling by today’s standards, but the crossover regularly feels more potent than that, thanks to its electrically assisted low-range responses, and it has an admirably punchy midrange to go with it. 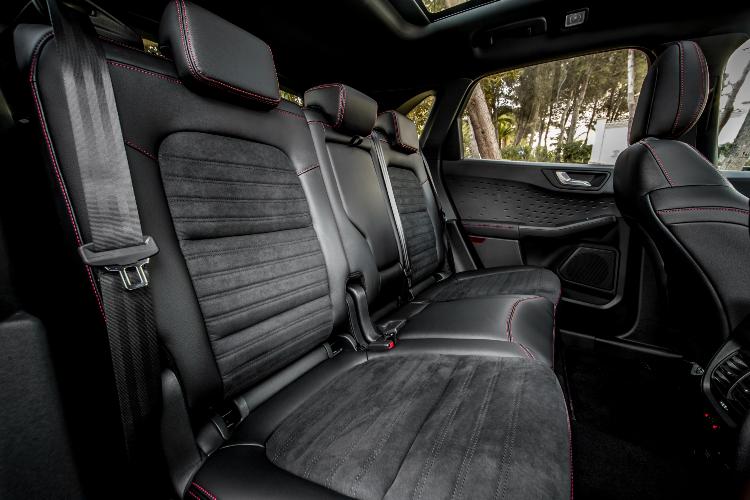 There’s plenty of space in the second row for adult passengers and as all models of Kuga are front-wheel drive only, the hump in the floor in the centre-rear seating position isn’t enormous – so 3 adults should be able to get comfortable in the rear of the Ford, albeit the central seat is raised slightly. Behind the passenger compartment, a 475-litre boot is, on pure volumetric terms, not the largest in the sector, but it is a great shape with a flat loading level and some useful underfloor storage too, especially for stashing the charging cables of the PHEV. Fold down the rear seats and that figure increases to a sizeable 1534 litres, although the split-folding mechanism is only 60/40 and not the more useful 40/20/40 you get in some competitors.

As to in-cabin storage, the Ford is about on a par with most rivals. A pair of cupholders reside longitudinally in the central tunnel, with big door pockets featuring scalloped-out holes to accommodate larger drinks bottles. The Kuga has a good-sized glovebox and some storage ahead of the rotary gearlever (in the CVT-only PHEV), plus various other stowage compartments scattered about the place. 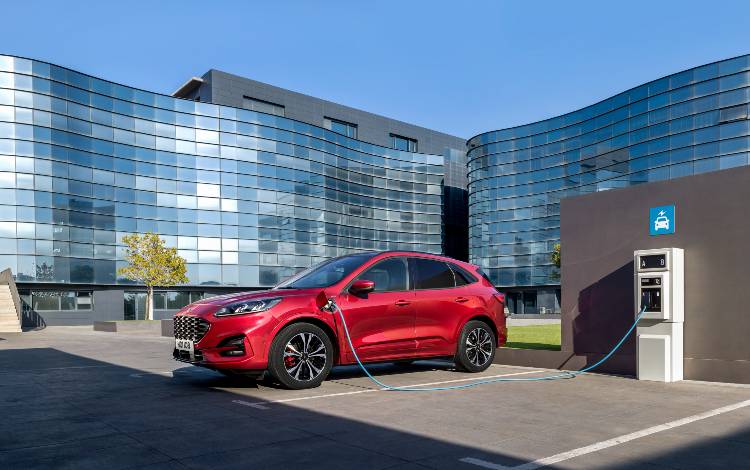 As already mentioned, the PHEV is the most expensive model of Kuga at ordering time – it is the most powerful, after all, and the most technologically advanced – but it repays its owner with far lower running costs. Officially, it will return up to 201.8mpg and electricity usage of 25.5kWh/62.1 miles (or around 2.4 miles/kWh, about typical of a PHEV compared to a pure EV), which results in an all-electric range of 35 miles from the Ford’s 14.4kWh lithium-ion battery pack, in which mode the Kuga PHEV can do up to 85mph without needing its petrol engine. CO2 emissions, accordingly, are just 32g/km.

Now, what we normally say round about here in the review, certainly when it comes to PHEVs, is that you’ll only get 201.8mpg from them if you charge these vehicles once or twice daily and only do 30 miles a day. Or that you’ll never get 35 miles of electric driving from a PHEV in reality, instead advising you to more realistically expect around 20 miles or thereabouts. Yet the Kuga PHEV managed its petrol-electric resources while on test with us better than any plug-in hybrid we’ve ever driven before.

It had 2 charges with us during the test, both of which added 75% of the battery charge to the reserves and showed 20-miles plus of electric driving after each one. Yet, from 183 miles of driving with us, the Kuga said it used its electric power for 64% of the time – accounting for 117 miles of that total distance. It averaged 73.3mpg overall, with a best figure of 930.1mpg (yes, nine-hundred-and-thirty point one) from a 23-mile journey conducted just after 1 of its charging sessions. It even managed to do 66mpg and 33.6 miles of electric driving when it first arrived on test with us… which was incredible, because its battery said it was empty when it was delivered.

So, in reality, you should be easily able to get 50-100mpg from the Kuga without too much in the way of meddlesome charging sessions, which is nice. And as to charging times, if you do have to plug it in? Well, the Type 2 socket on the front passenger wing gives a full battery in 3-and-a-half hours on a 7.4kW AC wallbox, while plugging the Kuga into a 3-pin domestic socket will result in it requiring 6 hours on the mains for a 0-100% charge. 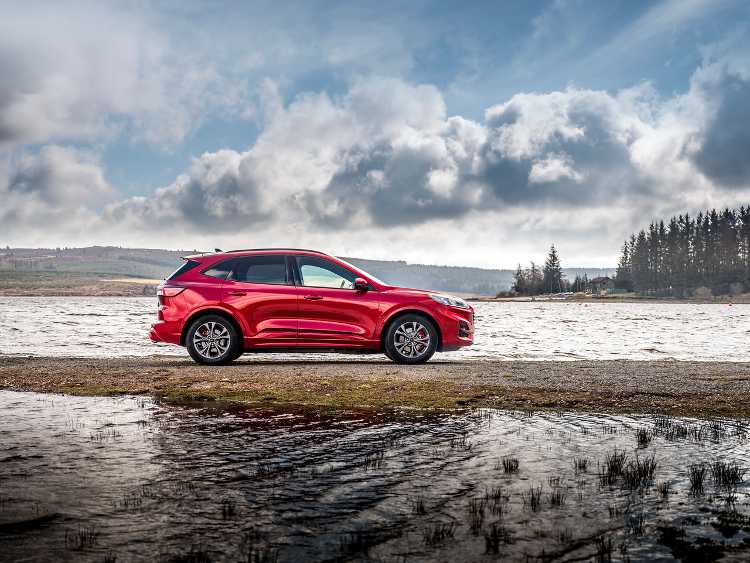 Ford did issue a recall on the Kuga PHEV early in its life in 2020, due to possible overheating concerns with the battery pack. However, that issue has been resolved now, so if you hear someone mention it in connection with the crossover-SUV as a reason for you not to lease one, you can safely ignore that advice and go for the Kuga plug-in with the knowledge that it’s one of the best PHEVs of its type.

Offers 2 PHEV options and a more striking interior than the Ford.

Hybrid and PHEV drivetrains provided in what is a quietly competent crossover-SUV.

The usual VW solidity and class, with a wealth of powertrain options to go at.

"This is now the third-generation Kuga, having originally launched in 2008. It’s arguably the best Kuga so far, though, as it blends some of the chassis verve of the Mk1 with the larger, more refined body of the Mk2, all while eradicating those 2 predecessors’ main drawbacks."

3 Things To Remember About The Ford Kuga:

How Does Car Leasing Work?
Learn more about the simple steps to leasing your dream car with fixed monthly rentals.How Does Car Leasing Work?
Help Me Choose: What’s The Difference Between Hybrid And Electric?
You might be finding the automotive world a confusing whirl of terminology right now. What’s an ICE? How does an MHEV differ from a PHEV or a HEV? And is an electric car a hybrid? Well, thankfully, we’re here to help you through the confusion...Read More
Hyundai Tucson PHEV Review
Is it madness to suggest that a Hyundai could possibly tempt you out of a BMW X3? This Tucson suggests it isn't as Matt Robinson puts this crossover-SUV through the Vanarama road test.Read Review