Kia doesn’t hold back in covering all bases with the Niro range. You can have a straightforward petrol-electric hybrid, a plug-in hybrid, or the fully electric e-Niro. For this comparison, we’re going to concentrate on the two ends of the range with the hybrid and pure electric models. Both are great family cars, so your decision could come down to how green you want your Kia Niro to be.

The Kia Niro arrived in 2016 to a muted fanfare as another competent addition to the burgeoning compact crossover class. Then, in 2019, Kia blindsided the world by introducing the e-Niro alongside the hybrid and plug-in hybrid versions. At a stroke, buyers could suddenly enjoy affordable family hatchback practicality alongside the sort of battery range only Tesla could offer at the time.

That impressive range, which comes in at an officially rated total of 282 miles, has only recently been matched by the Skoda Enyaq iV. Other EV family cars like the Nissan Leaf or MG ZS EV are not quite on a par. With the Kia’s generous equipment count, excellent safety, and just plain simple ease of use, it makes a compelling case for itself.

Company drivers will appreciate the e-Niro’s low business costs, though private drivers may have to make a more considered choice between e-Niro and a hybrid Niro. 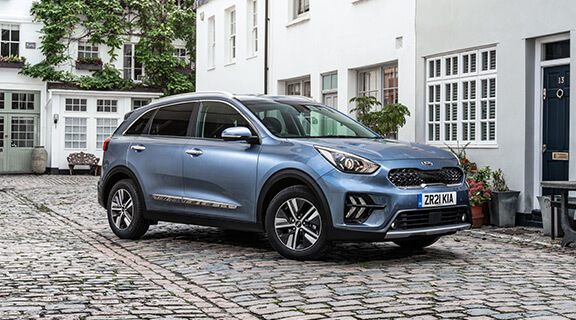 Both of these Kia Niros use electricity to power them to varying degrees and this is what dictates the only obvious clue to their positions in the range from the outside. With the hybrid version, there’s the usual-looking front grille that’s needed to let cool air into the engine’s radiator. With the e-Niro, there’s a smooth panel instead that helps make it slightly more aerodynamic to eke out its electric charge further.

The grille is also where the charging port is when you need to hook up to the grid for a zap of electric. This does throw up a curious anomaly for the many company drivers who will be keen on choosing the e-Niro. With the charger at the front and many companies insisting cars are reversed into parking spaces for safety reasons, you either need a long enough charging cable at the charge station or be prepared to park nose-in.

Sit inside these Kias and there are some tell-tales as to which you are in. The hybrid has a gear lever that’s typical of that in most cars. But in the e-Niro there’s a rotary controller to select gears, with a simple choice of Reverse, Neutral or Drive. The Park function is operated by pressing the clearly marked button in the middle of the circular gear dial. One other obvious difference in the cabin is the dash display: in the e-Niro there is no need for a rev counter, so instead the display presents an EV-relevant selection of information on range and battery charge.

As for the mechanical side of things, the Niro hybrid has a 1.6-litre petrol engine with 139hp and a 6-speed automatic gearbox to drive the front wheels. For the e-Niro, Kia offers two power outputs depending on which trim you choose: there are 39kWh and 64kWh versions, which equates to 134hp and 201hp, and the more powerful model is capable of driving further on a single charge. 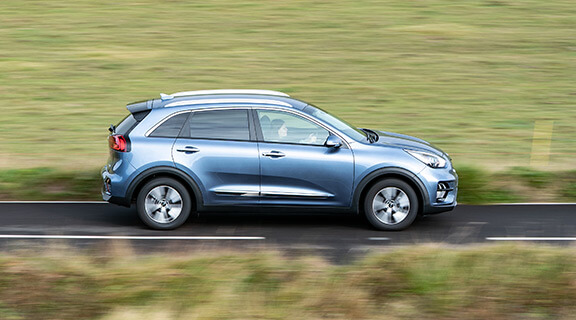 The Kia Niro hybrid offers some limited battery-powered driving at low speeds. When pulling gently away from traffic lights or for short low-speed trips around town, it will travel silently and the 1.6-litre petrol motor comes into play with no hesitation or rowdy rumble. The 6-speed automatic gearbox is smooth going up and down the ratios, but don’t expect this Niro to pin you back in your seat if you use the full 139hp on offer: 0-62mph in 11.1 seconds is leisurely compared to, say, most Nissan Qashqai or Skoda Karoq variants. If you went for the plug-in hybrid Niro, it claims up to 30 miles of electric-only driving and 0-62mph in 10.4 seconds, though it’s handling is not as nimble as the plain hybrid version’s.

Choose the e-Niro and it’s a very different proposition. The 39kWh model sees off 0-62mph in 9.8 seconds, so on paper and on the road it’s much brisker. It can cover up to 180 miles in combined driving on a single charge, so reckon on 140 miles in the real world. However, we’d choose the 64kWh e-Niro for a number of reasons. First off, it has a combined range of 282 miles, which tops most EVs including the Nissan Leaf and Skoda Enyaq. Then there’s the useful punch off the line, which is ideal for nipping out into busy traffic or joining fast-flowing dual carriageways. The claimed 0-62mph in 7.8 seconds is impressive, but this Niro feels even quicker in reality.

Another reason for choosing the e-Niro is its superb refinement. The hybrid is good on this score, but the EV model is noticeably better, though some wind noise makes itself known at motorway pace. Mercifully, none of the Niro line-up produces much road noise in the cabin, so it’s a relaxing car on long journeys.

Where the hybrid pulls back ground on the e-Niro is in ride and handling. Without the weight of the EV’s bigger battery pack, the hybrid feels more nimble through corners and has less body lean as you do so, though it still prefers a more laid back approach to driving than a Ford Puma or Peugeot e-2008. . Also, all Niros have steering with a remote, lifeless feel, but it’s far from a deal breaker in a compact crossover.

The centre consoles in the hybrid Niro and all-electric e-Niro might be a little different to look at, but both offer plenty of space to stash all of the usual gubbins; phones, chargers, wallets, and sunglasses can all be securely placed in the centre console, or the large door bins, or the small but useful glovebox.

The driver of the e-Niro might feel a little more perched up higher than in the hybrid, which is a result of the battery being under the floor. Far from a negative, this turns out to be a good thing as it affords an SUV-like view of the road ahead. Every Niro comes with a height adjustable driver’s seat, so you can always raise up the chair in the hybrid to suit.

All Niros also come with rear parking sensors and reversing camera, which makes backing into tight spaces a piece of tasty baked goods. Kia has also designed a small window into the rear pillars (called the C-pillars), so the Niro doesn’t suffer from the same blindspot that many such cars have.

In the rear seats, the hybrid and e-Niro, as well as the plug-in hybrid PHEV model, offer the same decent (but not class best) space for passengers. A couple of adults will fit in without contorting their legs, but it’s best reserved for kids.

Head to the boot and the tailgate opens up high to clear even taller users’ heads. Unusually, the EV model has the biggest boot of the lot in the Niro range thanks to the way its batteries are laid out under the floor. So, the e-Niro offers 451 litres of carrying capacity with the rear seats up and 1405 litres with the back seats folded down. The hybrid provides 382- and 1380 litres respectively, while the PHEV can only muster 324- and 1322 litres. In the e-Niro, there is also storage under the boot floor for its charging cables, which means they are not flopping about in the boot as you drive.

Looking at both the hybrid and e-Niro in 2 trim, we find the petrol-electric car has a combined fuel economy of 54.3mpg. That’s enough to cover more than 500 miles on a single tank, in theory. Drive the e-Niro with one eye on consumption and it has a claimed combined total range of 282 miles, which is about 240 in real terms for the 64kWh model.

The hybrid produces 110g/km of carbon dioxide emissions in our chosen trim, which means £160 for the first year’s road tax. The e-Niro costs nothing for this thanks to its zero tailpipe emissions, and it also gives company drivers paying tax at 20% rate  a Benefit in Kind bill of just £70 per year compared to the hybrid’s £1313.

Pick the hybrid and it’s cheaper to insure as it sits in group 11 to the e-Niro’s group 24 rating. However, both come with the same 7-year, 100,000-mile warranty and service intervals of 12 months or 10,000 miles, depending which arrives soonest. 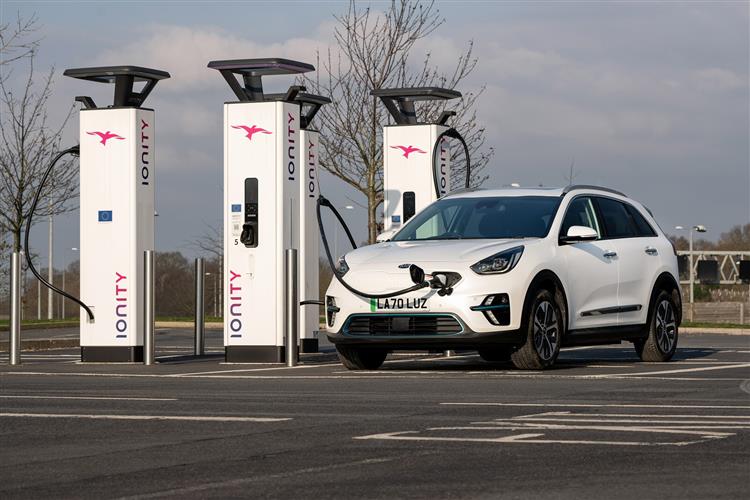 The Kia e-Niro comes with a five-metre Type 2 charging cable as standard, and a Type 2-to-3-pin adapter that’s recommended only for emergency use. Opening the flap in the front grille reveals the charging socket which, if you use a 3-pin domestic socket could take up to 29 hours to recharge the 64kWh e-Niro from flat to full.

Much better is a typical 7kWh home wallbox that cuts that charging time to 9 hours, which is ideal for overnight use. Or, you can go from 0 charge to 80% in 1 hour 15 mins with a public 50kWh charge point.

The e-Niro can be used with the Kia Charge account that gives access to the largest public charging networks and uses a smartphone app to let you find them. It also gives information on the car’s charge status. There are two tariffs available with the Kia Charge account, with one tailored to those who tend to charge at home and the other for drivers who regularly use public chargers. Both are paid on a monthly basis as you do with a mobile phone deal.