The original Land Rover Defender has its roots all the way back in 1948 Land Rover Series 1, and across a near enough 70-year lifespan it became a genuine British and cultural icon. You might consider this, the 2020 Defender, Land Rover’s difficult second album then.

Land Rover has nailed it. If the original Defender is Nirvana’s Bleach, a cult classic that appealed to those who could see through the roughness, then the 2020 Defender is Nevermind: huge, polished, and produced to appeal to a mass market.

It won’t revolutionise anything, of course, but somehow the new Defender is all at once the luxury-standard large family car that today’s SUV-obsessed market demands, yet it surpasses its predecessor in the all-terrain stakes by every quantifiable measure. Those two qualities are generally considered conflicting, making the Defender’s breadth of abilities so deeply impressive. If you’re comfortable with the sheer scale of the thing – the five-door ‘110’ version really is massive – then there are few family cars as capable as this. 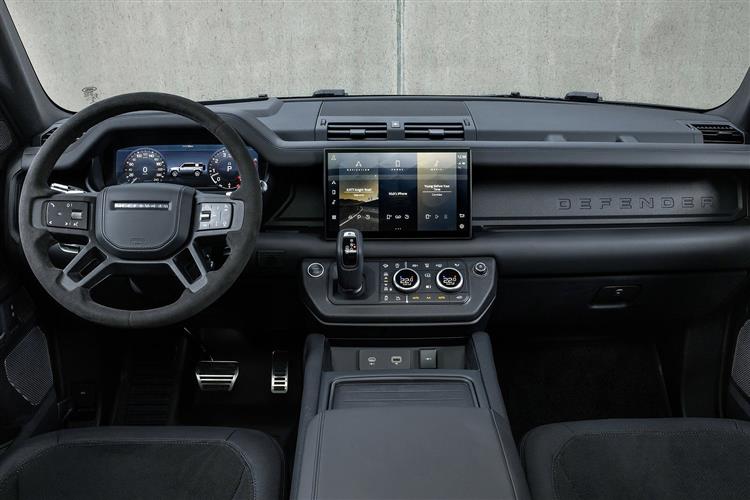 Everything, pretty much. The Defender is not perfect, of course, but there’s very little to criticise about a car that nonchalantly breezes across the craggy terrain of high expectation it on its way to lunch at The Savoy. That off-road ability includes wading depth almost twice what the original could muster, at 900mm (it can basically swim), similarly improved breakover, approach, and departure angles (28, 38 and 40 degrees respectively), an optional air suspension setup that gives the car near enough a foot-and-a-half of maximum ground clearance, and a 3.5-tonne towing capacity.

All Defenders come with hardware including two locking differentials and a low ratio mode for the eight-speed automatic gearbox, while the latest Terrain Response system makes whatever is below the wheels as easy to dismiss as a few prods on the touchscreen, a 10-inch display incorporating Land Rover’s Pivi Pro II infotainment system that’s responsive, highly intuitive and designed attractively.

And yet, partly because it’s built around a cutting-edge aluminium monocoque chassis (as opposed to the ladder frame of the original), it’s a very modern and refined school runner. In pure day-to-day refinement and comfort terms it’s much closer to a Discovery, or a Range Rover even, than it has any right to be. Coupled to all that is a cabin that effortlessly blends a utilitarian aesthetic with the soft-touch heft of a luxury SUV. And, because of its sheer size and raft of accessories and options, genuine flexibility. It can be a five-, six- or seven-seater, has masses of space, and the larger 110 version has a boot big enough to swallow all your kitchen sinks.

We just can’t gloss over the reliability issues that Land Rover’s products suffer from, with the company often placing low down in customer satisfaction and reliability surveys; in 2019 Land Rover was rated 20th in JD Power’s manufacturer reliability survey, with 142 problems reported per 100 vehicles. For reference, Peugeot came out on top with 77 problems on average. There have also been some well documented problems with the Defender specifically, although some of that is to be expected with any brand-new model. However, with loads of the Defender’s features being dependent upon electronics, including its 4x4 capability, that’s something to think about.

The huge number of accessories and options available with the Defender is of course brilliant for those buying with specific ‘lifestyle’ needs in mind, but it can also be daunting for someone just looking for a posh runabout. There are four trim levels (S, SE, HSE, X) and five if you include basic spec - a spec that some consider the coolest for its steel wheels and utilitarian vibe. On top of that there are around 200 accessories, some of which are grouped into themed packs with names like Explorer, Adventure and Urban.

Basically, look carefully at what the Defender you’re planning to lease includes because it really will make a difference to the look and feel of the thing – and, of course, the price.

Imperious. An event. Starting with the actual effort of climbing up into the thing. The door sill feels about the same height as a Lotus Elise. There’s nothing on this side of a Mercedes-Benz G Wagon with the road presence of the new Defender, but what’s so deeply impressive about it is that it’s so good both off-road and on it.

Anyone who drove an original Defender, even one of the later ones, will know that it was a comfortable car in the same way that breaking up with someone is a comfortable conversation. It’s very difficult to imbue a proper off roader with day-to-day comfort, because in engineering terms those qualities tend to oppose each other.

However, Land Rover has done just that. The Defender feels like eight-tenths of a Range Rover in refinement terms, yet is quantifiably a better off-roader than the outgoing Defender. A couple of things give it away as not being a luxury car first and foremost, though.

Step out of a big premium SUV like a BMW X7 or Audi A7 and the Defender’s relatively slow steering and wallowy manner might initially make you feel a little sea sick. It does move around on its springs quite a lot and yet it’s quite firm underneath you. And once you get past 60mph the massive serving tray wing mirrors start to crackle like a vinyl record as the wind hits them.

On the way up the gears the standard eight-speed automatic gearbox is slicker than a Jimmy Carr one-liner, but for some reason when the car’s coming to a stop it shuffles a little awkwardly, and the very powerful brakes can be a little difficult to modulate at low speed too.

Also, it’s just massive, which means the corners can feel hard to place, and rear visibility is virtually non-existent because of the spare wheel on the tailgate; despite the sky-high driving position giving a good view of the road ahead, this is not a car for those nervous about parking. As an aside, the boot is side hinged which means it opens out too wide for tight parking situations.

Each of the engines is punchy and quick to respond too, particularly the 3.0-litre diesels, which also sound the part thanks to their six-cylinder growl. As compared to the petrol options they’re really the better choice in a car like the Defender, owing to their huge torque reserves coupled to reasonable fuel economy.

Land Rover launched the Defender with 2.0-litre four-cylinder diesel but they were surprisingly short lived. The range now comprises a characterful 3.0-litre, six-cylinder diesel in three states of tune (200hp, 250hp and 300hp) with each returning 32mpg average fuel economy using the WLTP test – a figure you can expect to nudge. Each has more than enough pulling power to haul the Defender along quickly enough, though for us the best balance of price and performance is the D250 in the middle.

If running costs are less of an issue there’s a P300 2.0-litre turbo petrol with 300hp and a P400 six-cylinder turbo with 400hp. That thing is rapid, but if your fuel economy hits the 20s you’ll be doing very well indeed. That said. There’s a best-of-both-worlds option in the Defender P400e, which mates the P300’s 2.0-litre engine with s 105kW electric motor for an 85.3mpg economy rating with 74g/km CO2. It’s pricey, but the low running costs and savings in company car tax (assuming that applies to you) could easily make up the higher leasing cost.

All Defenders get LED headlamps, a digital instrument display, a 10-inch touchscreen with smartphone mirroring, heated seats with part-leather and electrical adjustability, numerous USB ports front and rear, a three-pin socket in the boot…basically, you really could get away with a bog standard Defender. Plus the white steel wheels look cool.

The Defender 90 is a three-door version on a shorter wheelbase and with steel springs as standard, as opposed to the adjustable air suspension that comes with the longer, five-door 110 version. The 90 – which is available as a commercial vehicle too – does have a lot of cabin space and can be a six-seater if you specify the brilliant (albeit small) front-centre jump seat, but it’s compromised as a day-to-day car: its 397-litre boot is comparable to a family hatchback’s in volume terms but it’s actually very shallow.

By comparison, the 110’s boot is an enormous 1075 litres stretching to 2300 with the rear seats folded flat. The 110 can be specified with two additional seats folded into the boot too.

The Discovery is nowhere near as cool but slightly better road manners. Same goes for the Range Rover you might be thinking of too.

BMW’s X7 is their biggest SUV and a better seven-seat luxury family car than the Defender, ultimately. But in no way an off-roader, of course.

"The new Defender is all at once the luxury-standard large family car that today’s SUV-obsessed market demands, yet it surpasses its predecessor in the all-terrain stakes by every quantifiable measure."

Three Things To Remember About The Land Rover Defender:

More On Cars
Best Cars With Three Isofix Points
The best cars with three isofix points for you and your family...Read More
Best 7 Seater Cars For Families
Top 7 Seater for large families and all their needs...Read More
Latest Car Leasing Deals
Take a look at our latest leasing hot offersView Deals