The Corsa-e is not Vauxhall's first dalliance with electric propulsion – the company was one of the first to produce a plug-in petrol-electric hybrid with the 2012 Ampera – but it is the company's first fully electric car. And in a segment that includes the MINI Electric, the Honda E and the Peugeot e-208, it's fair to say that the Corsa isn't the most riveting small electric car on available.

But to dismiss it for that reason would be a mistake, because the Corsa-e makes a virtue of being…well, ordinary. It's very easy to live with because this electric version of the corsa is similar to a standard petrol or diesel Corsa and it has a substantial battery range. This makes it a very unintimidating entry into the world of electric vehicles.

There's very little that distinguishes the Corsa-e from a standard Corsa. You can check out our thoughts on the petrol version in our Corsa ICE review or see how they compare in more detail in our Corsa vs Corsa-e article, but here we'll focus on the specifics of the electric version.

Open the fuel filler flap and you'll find a charging port, and there are a couple of 'e' badges and…that's about it. Again though, that's a strength. If you're looking for an electric car that's as normal as can be, you've found it; the Corsa-e is styled in straight laced contrast to the quirkiness of the MINI Electric and Honda E.

That's not to say it's boring though. The shark fin c-pillar is a neat touch and it's accentuated if you get a contrasting coloured roof, while features like the pointy LED daytime running lights make this look more 'grown up' than any Corsa before. It's also available in 7 colours that it shares with the ICE versions, with various interior choices for those who like to customise, check out our Corsa colour guide for details.

Inside it's fair to say that the design is conservative, but it's uncluttered, neat and very easy to navigate, with all the major controls on knobs and buttons rather than being buried in touchscreen submenus. There's no wow factor in there like there is in the Honda E, but it's easy to live with. 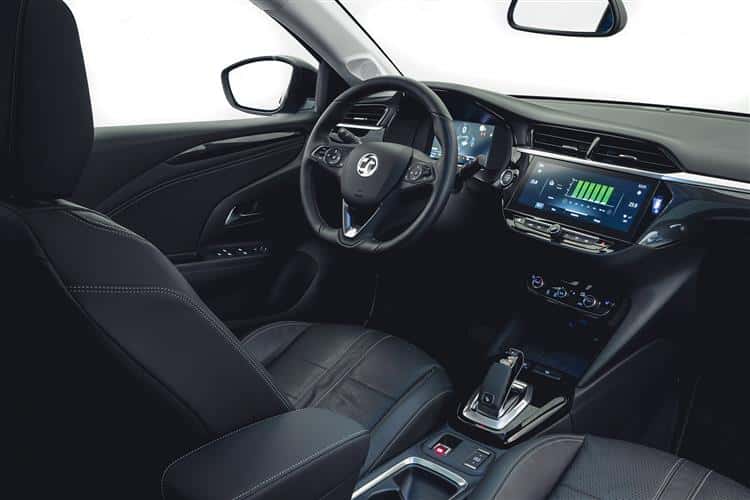 Every Corsa-e comes with a digital instrument panel, which is a nice nod to futurism but in reality it looks a little like an afterthought. It displays plenty of useful information though, mostly pertinent to battery management – a calming feature for those with range anxiety.

All Corsa-e models have a decent amount of kit, as befitting a small car with a list price that starts above £30,000. All get air conditioning, a touchscreen infotainment setup, and distinct alloy wheels designed to be as aerodynamic as possible.

The cabin quality is about what you'd expect for a car in this class, albeit there's a higher proportion of hard, hollow plastic in here than you'd find in, say, a Volkswagen Polo – and even in a Peugeot 208, which is surprising given that the Corsa is based on that car. Peugeot owns Vauxhall now, basically.

The battery is packaged under the floor where it doesn't eat into cabin space, so the Corsa-e is just as spacious as the standard car, generally feeling on par with the Renault Zoe, and although the boot capacity is a little down, in reality it offers pretty much the same usable space; the official rating is 267 litres compared to 309 in the standard Corsa, but that's because there's no underfloor section in the electric model.

As standard the rear bench folds 60/40, opening up a 1076-litre boot space, and although there are a few useful little cubbyholes in the cabin the glovebox is disappointingly small.

Running costs are a huge benefit of going electric, of course, and the Corsa-e is quantifiably the best in the range in this respect.

Lease one of these and you will inevitably establish an understanding of electrical units in the same way you understand miles per gallon, and then you'll start to think about just how cheap these things are to run. The official WLTP rating of the Corsa-e is 16.8Wh per 100km (62 miles), which if you're being charged 15p per kWh for your electricity (which is about average for the UK), that's £2.52 per 62 miles

To take this further, £2.52 would buy you a couple of litres of fuel at the moment – let's say half a gallon (2.3-litres). Would half a gallon of fuel get you 62 miles in your car? In other words, does your car do 124 miles per gallon?  We're guessing not. Vauxhall itself quotes 3p per mile running costs compared to 3-4 times that for a petrol Corsa. 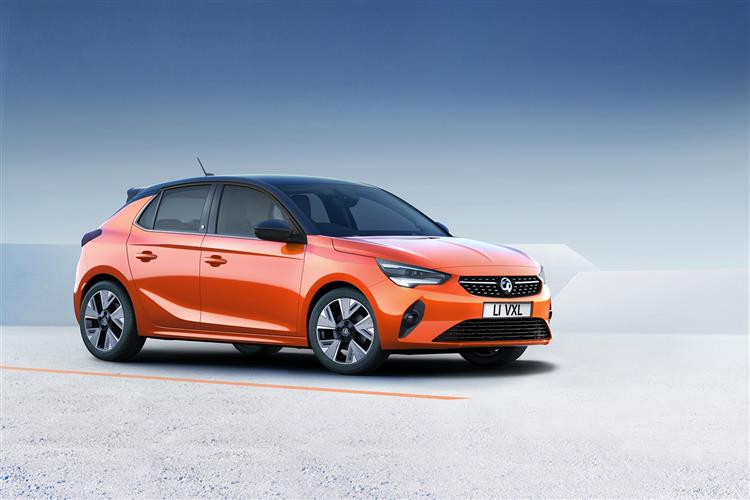 It costs quite a lot to buy (starting at almost twice the price of a basic petrol Corsa), but the beauty of leasing is that the monthly premium doesn't reflect that leap at all. It's relatively cheap to insure too, only a few groups higher than a diesel Corsa, and if you're a company car driver then first year BIK tax is 0% and only 1% then 2% per year thereafter. For reference, a 1.2-litre base model ICE Corsa commands 28%. That'll save you literally thousands of pounds per year.

As standard it comes with a 7.4kW charging capability, which means that if you've got a home wall box then you're looking at about 7-and-a-half hours to charge it in full. It also gets proper rapid charging capability, up to 100kW, meaning you can basically get the thing juiced up in well under an hour. There are versions with an 11kW charging setup too, which improves charging times at 22kW public rapid points, down to around five hours.

There's even an app you can download to your smartphone that you can use to instruct the car to charge only when your tariff is giving you cheaper electricity – overnight, usually. That reduces your costs even further.

Of course, none of that would be much good if the car didn't have any range, but it does, quite a lot of it: 209 miles as rated by the WLTP test, thanks to a 50kWh battery pack. You're never actually going to achieve that – more like 150 miles – but as compared to other little electric cars it's a really comforting number. The MINI Electric and Honda E are both rated closer to 100 miles than 200. 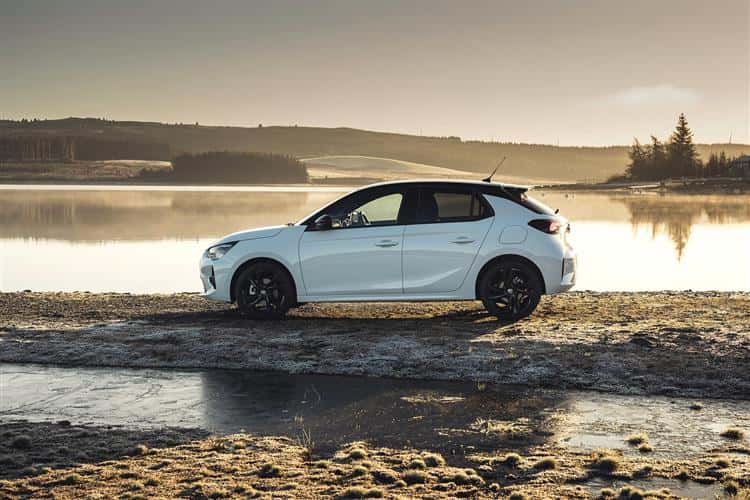 Is almost exactly like driving a standard Corsa. Which is to say it's not very exciting, frankly, but it's as 'normal' as can be for an electric car. With one caveat: brake feel. It's not only inconsistent, which itself is frustrating, but the brake energy capture system at times makes it very difficult to modulate the pedal, so you frequently end up over-braking.

That aside though, the Corsa-e feels like driving a very smooth and refined automatic supermini. You'd assume that having all that weight pressing down onto the floor would disturb the ride, but it doesn't. Vauxhall has done a really good job of making this ride with compliance. It's a comfy runabout. Certainly, it feels a notch up from the Renault Zoe, especially at higher speed. You'd expect that given that it's both newer and more expensive, but it wasn't guaranteed.

Going more quickly it feels a little more reluctant to turn in than a Corsa without a battery pack, but really not enough to make any difference for most. And anyway, this is a runabout, not a hot hatch.

Although saying that, we now come to the final trick of the drivetrain, which is that the driving modes actually affect the power and the range of this. It's a really smart feature. In Eco Mode power drops to 81hp, the fast pedal is desensitised and the air con stops working properly, but it will give you maximum mileage. Even in normal mode maximum power is reduced to 108hp, which means that in Sport mode, where you get your full heady 136hp and 260Nm, the Corsa-e really does feel quick and responsive. That's unusual – usually sport modes just make the steering heavier and the throttle more sensitive.

In Sport mode, the car gets to 30mph in just 2.8 seconds, which is only one tenth of a second slower than a Golf GTI does it. Yep. What we have here is the definition of 'nippy'.

The Honda E and the MINI Electric might seem more interesting than the Corsa-e, but this is the electric car you'll want to actually run because it will seamlessly fit in with your daily needs, with its big range, its comfort, its space and its sense of being normal.

It's to Vauxhall's credit that the company appears to have done that deliberately. It has ensured that its electric supermini is as easy to live with as possible – so easy, in fact, that lots of those who may have intended to buy a petrol or diesel Corsa will be swayed into one of these. They'll then stay with electric cars ad infinitum. A good thing.

Vauxhall Corsa Colour Guide: Which Should You Choose?
Here’s a detailed look at the paint palette available on the Vauxhall Corsa 5-seater supermini, and its all-electric derivative in the form of the Corsa-e, which we hope will help you choose your perfect new car colour. Read Guide
Vauxhall Corsa Review
Auto expert Mark Nichol takes a look at Vauxhall's newest Corsa model and give us the details...Read Review
Fiat 500 Vs Vauxhall Corsa
Looking for a small car but can't choose between the Fiat 500 and Vauxhall Corsa? We put the two head-to-head...Read More
How Does Car Leasing Work?
Learn more about the simple steps to leasing your dream car with fixed monthly rentals.How Does Car Leasing Work?