The Vauxhall Corsa supermini and its Corsa-e battery-powered EV sister model are identical from the outside. Underneath the bonnet, the petrol and electric hatches are very different, but does this divide them or make them equally capable options? To keep the two cars’ standard equipment on a par, we’ve chosen the SE Edition and SE Premium models for the petrol and EV models, respectively.

The Vauxhall Corsa is one of the best-selling cars in the UK and has been giving the Ford Fiesta and Volkswagen Polo a run for their money just about since the wheel was invented. This is not to say the Corsa has become stuck in a rut or failed to keep with the times. Far from it, as the current Corsa supermini is a handsome, spacious, and very able car for family drivers.

A new addition to the current Corsa line-up is the Corsa-e, which from the outside is very hard to tell apart from its petrol-powered sibling. This is a deliberate move by Vauxhall as it reckons more buyers want the benefits of an EV, such as low fuel bills, zero tailpipe carbon dioxide emissions, and quiet running. However, Vauxhall also thinks these drivers don’t want to shout too loudly about their green credentials. Instead, they just want to get on with their journey.

Which Corsa is best for you will depend on a lot of different factors. So, let’s plot a Corsa (sorry) to find the answer. 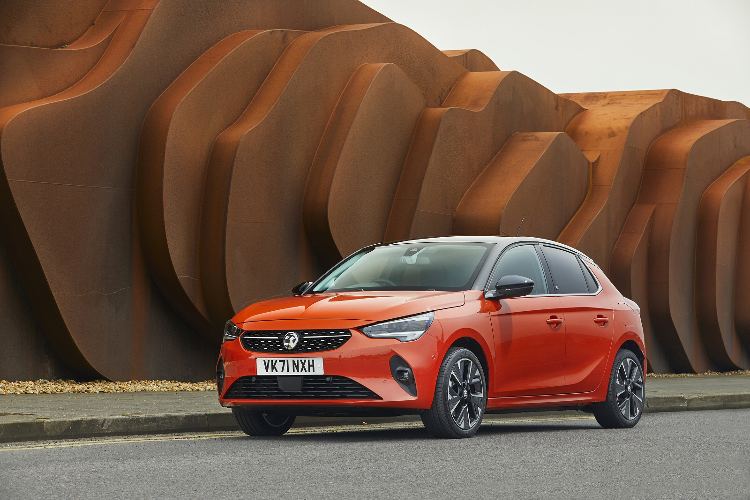 We’re going to have to break out the powerful magnifying glass to spot the differences between the Corsa in its petrol and electric forms from the outside. The keen-eyed among you will spot the EV model has an ‘e’ tacked on to the end of ‘Corsa’, and that’s about your lot. The only other exterior detail you’ll notice is the battery-operated version has bi-colour wheels, though these are the same 16-inch size for the two SE models compared here.

Underneath the Corsa hatchback’s skin, things are much more clearly cut. With the petrol model in this instance, you get a 1.2-litre, 3-cylinder turbocharged engine with 100hp. It’s attached to a 6-speed manual gearbox, or you could opt for a 130hp version that is only offered with an automatic gearbox. Vauxhall also offers the Corsa with a 1.5-litre, 102hp turbo diesel engine.

In the Corsa-e, there’s an electric motor that drives the front wheels like the petrol model, but it has a single-speed transmission. Sharing its platform with the Peugeot e-208, the Corsa-e has its battery pack arranged in an H-pattern under the cabin’s floor to keep its weight low down. One consequence of this is the EV has a slightly longer wheelbase - that’s the distance between the centre of the front and rear axles - than the petrol and diesel Corsa’s.

The only other variation between these two Corsa’s that you might spot if they are parked side by side is in the boot. Due to the size and position of the Corsa-e’s battery pack, its boot size and its overall loading capacity with the rear bench dropped down are a little smaller than in the petrol models. You’d really need to be filling every inch of space to notice this, though. 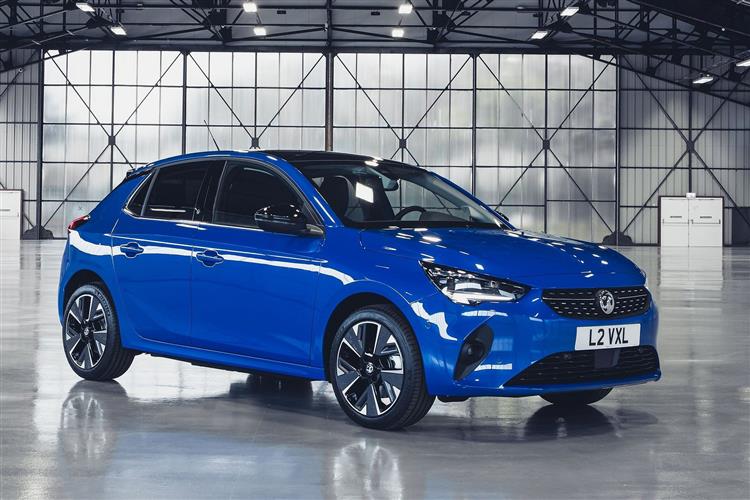 The 100hp 1.2-litre turbo petrol engine in the Corsa feels very lively as it works its way up the 6-speed manual gearbox. There’s a pleasant 3-cylinder thrum from the motor that settles way into the background at higher speeds, and the Vauxhall is one of the best superminis for driving on motorways. It keeps road and wind noise at a distance from your eardrums and it’s more refined than a Ford Fiesta or Renault Clio.

This is all good news for the petrol-powered Corsa right up until you drive the EV model. It is noticeably brisker off the mark thanks to all of that instant electric shove the moment you press on the accelerator pedal. Make full use of the Corsa-e’s 136hp and it’ll see you whizz past 62mph from rest in just 7.6 seconds. That’s knocking on for hot hatch performance, so no wonder it has a zing in its step.

At higher speeds, the Corsa-e doesn’t have quite as much of an advantage over the petrol car, but it’s still more than up for nippy overtakes. It’s also happy on the motorway, though this does deplete the battery range quite quickly, as it does in all EVs.

In town, the Corsa-e has slightly firmer suspension than the petrol model to cope with the weight of the battery pack. It’s better than many electric superminis, but the petrol still has the edge for comfort. That small lead is retained on choppy A-roads, though both cars handle corners with the same easy composure. There’s not a huge amount of steering feel, but either Corsa is light and handy when it comes to slotting into parking spots.

One of the few areas where you can find slender differences between the petrol and electric Corsas is in the boot. If your prime concern is eking out every last atom of space in the cargo area, you’ll be better off with the petrol as it offers 309-litres of carrying capacity with the rear seats in place. The Corsa-e makes do with 267-litres due to the battery snaffling a bit of load space.

Tip the 60/40 split and tumble rear seat down and the petrol maintains its lead, offering 1118-litres to the EV’s 1081-litres. However, you really would have to cram in everything and the kitchen sink to notice this. Either way, the Corsa is one of the roomier cars in the supermini sector for heading to the shops.

When it comes to accommodation for passengers, there’s nothing in it between electric and internal combustion versions of the Corsa. Vauxhall has designed the Corsa-e’s battery pack so that most of it is gathered under the rear seat bench, while the rest is hidden beneath the front chairs. This arrangement means there’s nothing in the rear footwells to hinder occupants’ feet.

The outcome of this layout in the Corsa-e is it can carry 2 adults in the rear, just like the petrol car. It’s roomier than a MINI Electric or Renault Zoe, so you can travel 4-up without the danger of cramps.

The Vauxhall Corsa 1.2-litre engine in 100hp turbo form with the six-speed manual gearbox has an average fuel consumption of 52.3mpg. That’s not quite as good as some rivals, such as the Renault Clio, but its 44-litre fuel tank capacity does mean it could nurse a fillup to just over 500 miles if you’re very careful. Around 400 miles between filling station stops is more likely. In the Corsa-e, its claimed combined range is 209 miles, but we’ve found 160 miles is realistic from a full charge without the risk of running the battery too close to flat.

All drivers will be concerned about tax implications and here the Corsa-e is a clear winner. It costs nothing in road tax compared to the £180 first-year charge for the 1.2 petrol, while company drivers pay just 1% Benefit in Kind for the zero emissions EV model. So, for a 20% tax payer, running an SE trim Corsa-e works out at just £5.18 per month in tax. By contrast, the driver of the petrol model will be shelling out at a 27% rate thanks to 119g/km CO2 emissions, meaning a £92.13 bill every time the calendar turns a page.

Corsa-e drivers will need to book a routine service every 16,000 miles or 2 years, whichever comes soonest. With the petrol Vauxhall, regular maintenance stops are once a year or at 12,500 miles. Still, both cars are covered by the same 3-year, 60,000-miles warranty, though Vauxhall also provides 8-year, 100,000-mile cover for the Corsa-e’s battery. The electric model also has 8 years of free breakdown cover included, while the petrol version makes do with a single year. 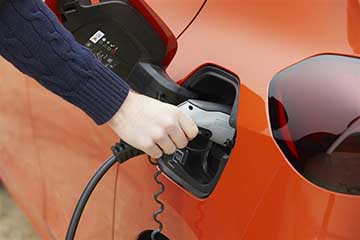 Every Vauxhall Corsa-e has an 11kW onboard charger as standard and comes with a Mode 3 cable as standard. You can pay extra for the optional Mode 2 charger cable. Using the supplied Mode 3 cable means you can go from 15% battery charge to 80% in around 3 hours 20 minutes using an 11kW charger. Plug in to a 50kW public rapid charger and that time drops to 45 minutes - about the time it takes to do the weekly shop or have a coffee, maybe? Should you end up having to charge from a 3-pin socket at home, you’re staring down the barrel of a 15-hour wait.

When you connect the Corsa-e to a charging point, there’s an LED light inside the charger flap. It flashes green to let you know that the battery is charging and goes to solid green when the battery is fully topped up. It can also illuminate in blue to tell you it is working with delayed charging, which you can select to take advantage of cheaper electricity tariffs.

Like most EVs, the Corsa-e works with a smartphone app, called MyVauxhall. It lets you check the battery’s charge remotely from your phone and you can also pre-condition the car while it’s still connected to a charger. This means you can warm or cool the cabin without running down the battery as you drive.

Vauxhall Corsa Colour Guide
Here’s a detailed look at the paint palette available on the Vauxhall Corsa 5-seater supermini, and its all-electric derivative in the form of the Corsa-e, which we hope will help you choose your perfect new car colour. Read Guide
Vauxhall Corsa Review
Auto expert Mark Nichol takes a look at Vauxhall's newest Corsa model and give us the details...Read Review
Vauxhall Corsa-e Review
Have Vauxhall nailed an the electric version of a classic...?Read Review
How Does Car Leasing Work?
Learn more about the simple steps to leasing your dream car with fixed monthly rentals.How Does Car Leasing Work?