A Volkswagen Passat with a part-electrified drivetrain. If you think about it, this is a very sensible decision. Plug-in hybrid electric vehicles, or PHEVs, offer the sort of super-low CO2 emissions that allow them to qualify for various tax breaks, not least incredibly low benefit-in-kind (BIK), and yet with their internal combustion engines onboard as well, they don’t have the sort of range anxiety issues that a full electric might present for some folk who have to travel further afield on occasion. 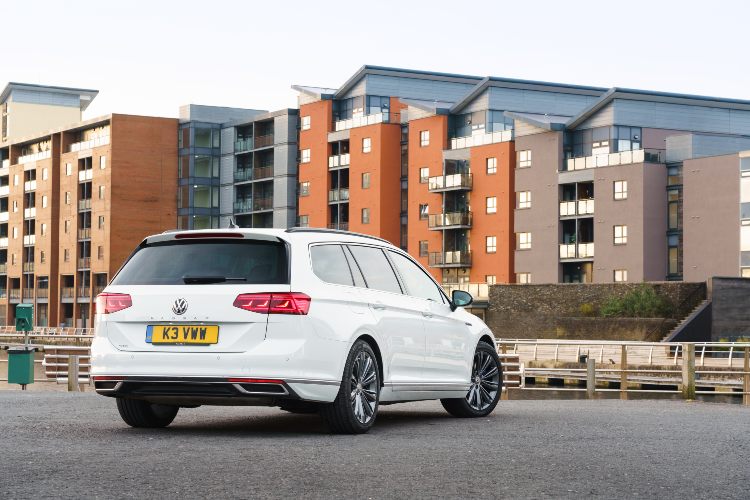 Which is why a PHEV drivetrain in what was once not-so-endearingly termed a ‘repmobile’ makes perfect sense. You’ve got the electric bit of the car for driving around in city centres and so on, and then the petrol bit for cruising up and down motorways between said city centres. The only thing is, Volkswagen has deemed its Passat PHEV is supposedly sporty enough to merit an electric derivation of its performance badging, so this plug-in is called the GTE – much like a Golf GTI is powered by petrol and a Golf GTD by diesel, this one has some electric propulsion.

But does that make the Passat GTE a bit confused? What is it – a sporting saloon/estate, or something frugal with which you can save both the planet and yourself a spot of cash on running costs?

Like any Volkswagen, it is understatedly handsome and it has a vast, beautifully made (if a bit dull to look at) cabin. The Passat is the less daring visual option when compared to its swoopy Arteon and Arteon Shooting Brake cousins, but that is not to say that the chiselled GTE Estate is in any way ugly. As with almost any car where there’s a 4-door saloon and a 5-door wagon, the Estate is better looking than the regular Passat, but the GTE detailing has been toned down over the years. Where once blue pinstripes could be found all over the place, this model looks quite sedate, and the only real giveaways that it’s the PHEV are the badges and those C-shaped LED running lights in the front bumper. 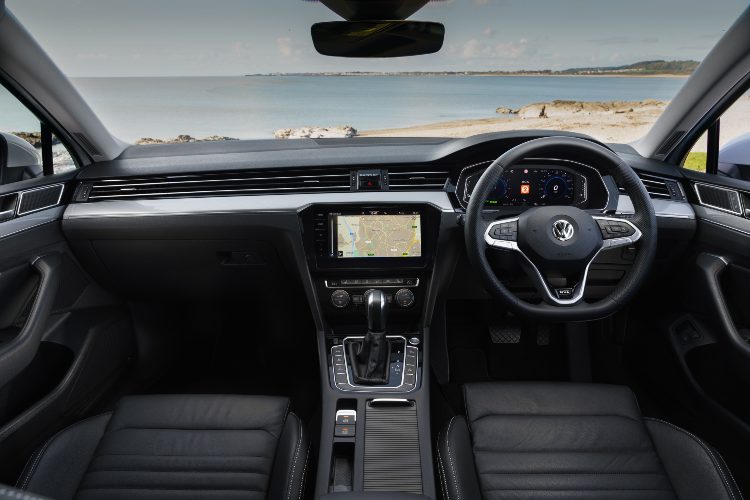 Inside is typically VW-classy and GTE buyers will enjoy a fully digital instrument cluster, a decent touchscreen infotainment system, plenty of toys and gadgets, and yet some useful physical switchgear for the climate controls and drive modes too. Admittedly, as we’ve already touched upon, it’s quite a sombre design in here but the full-width strip in which the air vents sit at least gives a splash of visual elan to the interior, while a little ‘Passat’ motif above the hazard-warning switch reminds you which model of VW you’re in – just in case you’ve had a total brain-freeze and forgot, and think you’re in an Up, for instance. 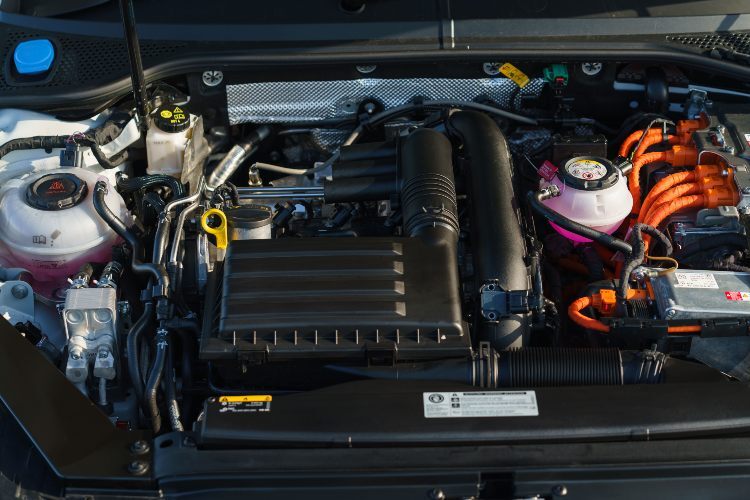 Perhaps our biggest bugbear with the VW Passat GTE is the engine. The 1.4-litre TSI turbocharged unit is relatively old technology in the Volkswagen Group nowadays, kind of the engine equivalent of still using a Samsung Galaxy S7 edge today (*discreet coughing noises from author*) as if it were the cutting edge of smartphones.

Volkswagen and its group, for what it’s worth, has a very lovely 1.5-litre TSI engine which is newer, smoother and more acoustically refined than this 1.4, but it isn’t used in the PHEVs, presumably for reasons of packaging and/or expense. And so you’re left with a louder, rougher engine in what is otherwise a very cultured car. 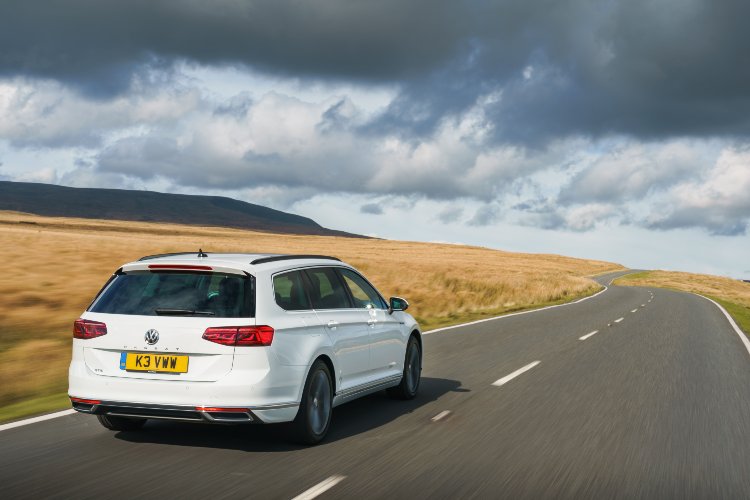 Perfectly proficient, but – like so many Passats before it – not massively memorable. Still, it is set up to do the day-to-day stuff brilliantly, rather than being entertaining down a backroad. Which once again leads us to the confusion we muttered about in the intro: this car says ‘GTE’ on it, as if it’s some sort of family transportation road rocket, a kind of a GTI with a ginormous boot… but it’s not sporty in the slightest. Skoda, for example, puts the exact same drivetrain in its Superb iV and leaves the car looking as plain as possible, with no pretence to any dynamic sharpness. We think Volkswagen would have been better served doing the same with the Passat.

The powertrain teams that 1.4-litre TSI engine to an 85kW (115hp) electric motor and a bigger 13kWh battery pack (it was 9.9kWh prior to the update/facelift for the 2020MY), the last item boosting the Passat GTE’s WLTP electric driving range to a theoretical 37 miles. The Volkswagen can also lay claim to a massive 230.6mpg and CO2 emissions of just 29g/km, yet the combined outputs of the PHEV gear are 218hp and 400Nm, meaning 0-62mph takes only 7.6 seconds and the top speed is an impressive 138mph.

The thing is, the Passat never feels anything like as strong as those performance figures might suggest. And a lot of that will be down to weight – adding the plug-in equipment always loads in the bulk to a car, which is why the GTE Estate is a hefty 1759kg as tested. To put that into context, a 2.0-litre TDI DSG Passat Estate with the 200hp turbodiesel engine clocks in at 1586kg, which is fully 173kg trimmer than the GTE.

And so not only does performance feel blunted, but the Passat’s always-reserved handling dynamics are further impeded by the mass of the GTE – it simply doesn’t want to turn into corners quite as keenly as a plain petrol model would do – while it suffers from that age-old problem of PHEVs versus their ‘normal’ relations: namely, a crunchier ride. To cope with the added kilos in their forms, manufacturers always have to firm up the suspension on PHEVs and with the Passat GTE, it results in a car which is not as smooth as some other models in the line-up. Granted, our tester had the optional £950 Dynamic Chassis Control (DCC) fitted, which allows you to play with the dampers to get the best ride quality on those 18-inch alloys possible, but the GTE fidgeted and thumped more in town than we remember the last Passat we drove ever did.

There’s more. The older engine necessitates an older gearbox, so while most other Volkswagens – automatic Passats with pure internal combustion included – have 7-speed DSG twin-clutch units, this GTE makes do with an ageing 6-speeder. And this transmission is more dim-witted than its newer relations, which only exacerbates the lack of speed. Much of the time, you depress the throttle and then wait impatiently for the gearbox to work out what the devil it’s going to do next.

Then there’s the most common PHEV lament of all, that of real-world fuel economy. If you leased or bought this car on the promise of 231mpg combined, what we’re about to tell you is probably going to fill you with horror. At its best, the Passat GTE returned 146mpg with us, on an 18-mile journey on local roads with plenty of juice in its battery thanks to a mains charging session (that’s what the ‘plug-in’ bit is for, after all). Very commendable. However, we didn’t just do short journeys in it, and over 374 miles of testing with a lot more motorway work thrown in, the Passat dipped to 45.4mpg overall. Not bad for a 218hp, petrol-powered, 1.8-tonne estate, we accept… but some way off 230.6mpg, eh?

This might look quite a negative summation, but by no means is the Passat GTE a bad car. In many ways it is comfortable, reasonably refined (engine and gearbox sometimes notwithstanding) and very easy to live with, and many of the quibbles we’ve raised are not specific to the Volkswagen plug-in hybrid but all PHEVs of a similar style.

Nevertheless, when you boil it all down with the Passat GTE, you realise it’s your typical PHEV: doesn’t ride and handle quite as well as similar models without any electrification, costs more to lease or buy in the first place, and will never get anywhere near the claimed manufacturer eco-stats unless you do no more than 37 miles every day and plug it in whenever you possibly can. If it works for you on taxation purposes, then go for it. But for us, there are better alternatives within the Mk8 Passat Estate’s line-up. 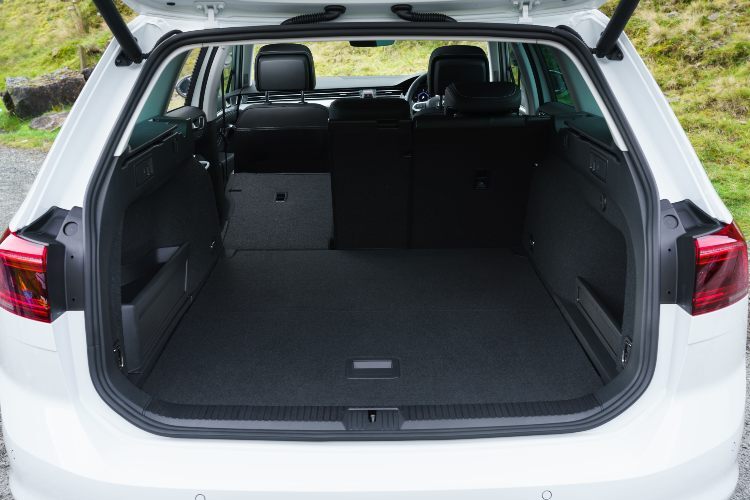 Here’s where the Passat GTE fights back somewhat, after the slightly disappointing drive. This is a cavernous vehicle as an estate normally and, luckily, having the electrical magubbins onboard doesn’t rob it of all practicality in the end. True, the boot space of a regular Passat Estate would be anything between 650 and 1780 litres, but on this PHEV those corresponding numbers tumble to 483 and 1613 litres. However, a 483-litre boot is still pretty decent, while the rear-seat space is generous to a fault in the back of the Passat, both in terms of head- and legroom.

Elsewhere, there’s neat underfloor storage for the GTE’s charging cables, the boot is full of helpful touches and partitions to make the most of its capacity, the rear seats split-fold in a 40/20/40 configuration, the pockets in all 4 doors are simply gigantic, and there are plenty of good cubby holes and stowage compartments dotted throughout the cabin. The Passat basically makes your life as easy as it can possibly be. 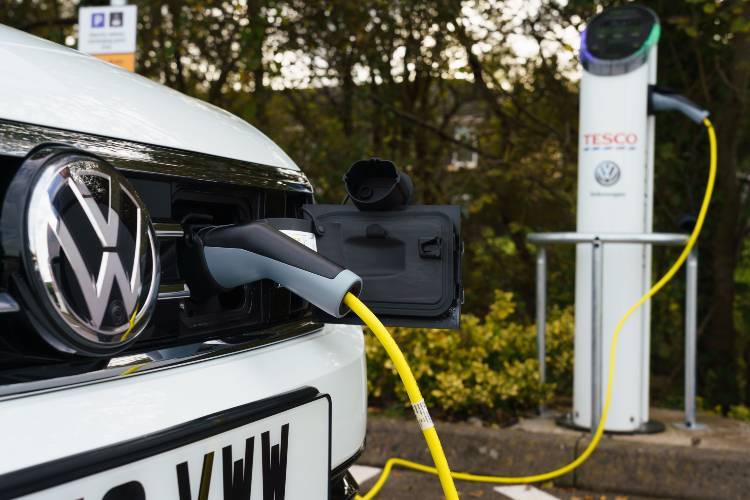 Indeed, our GTE Advance test car should have cost £42,845 basic, but had been optioned-up to £47,195, which is a huge amount of cash for a VW Passat. That translates into leasing prices, too – a GTE Advance comes in at £458 per calendar month with Vanarama, when almost any other model of Passat wagon is less than £400pcm to lease with us, while the cheapest variant would set you back a mere £309pcm.

The Passat Estate is a very popular model here, outselling the saloon version by 3-to-2 in the UK. The GTE is a big part of that success, with the plug-in hybrid accounting for 1-in-5 of all Passats sold on these shores last year. In 2020, that means of the 6523 Passats shifted, 3773 were Estate models, while around 1300 of all cars were PHEVs. So a GTE Estate like this is probably the Holy Grail of ownership for British Passat fans, then. If such people exist, of course… 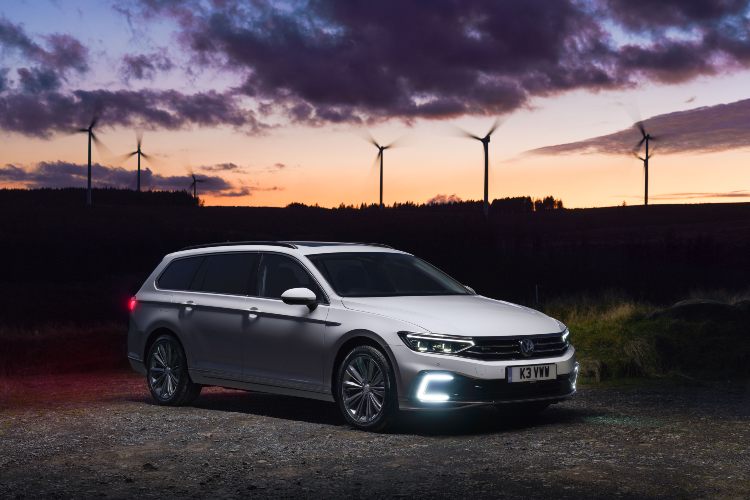 Hard package to beat all round, with a quality chassis and superb interior finishing.

Same car as the Passat GTE underneath, yet strangely more desirable – maybe because it is less pretentious.

Even nicer interior and sharper looks, while the T6 seems like it was set up to be a PHEV so it rides well.

"Inside is typically VW-classy and GTE buyers will enjoy a fully digital instrument cluster, a decent touchscreen infotainment system, plenty of toys and gadgets..."

Three things to remember about the Volkswagen Passat GTE: