The Volkswagen Group seems to do a million of these crossover-SUV type cars now between its various brands – Skoda, SEAT, Audi, Lamborghini, Porsche and VW itself – and so it's sometimes quite difficult to tell them apart.

But then again, what's wrong with churning out multiple slight variations on a theme if the theme itself is a good one? And so here we have the Volkswagen T-Roc, a car that Volkswagen says sits in the space between the T-Cross small crossover and the Tiguan medium crossover. Yep, there was a gap there apparently. Who knew?

Volkswagen did. And Volkswagen was evidently bang on, because while it's easy to get bogged down on the issue of why VW bothered making the T-Roc and where it fits in the market, the T-Roc is a hit with consumers. A couple of years on from its launch it's already one of VW's biggest selling cars in Europe, outstripping the Golf in some markets, and in the UK here it's crept into the top-ten monthly best sellers list on a couple of occasions.

A big part of the T-Roc's appeal lies undoubtedly in the styling. Looks are subjective of course, but this is almost certainly the most interesting looking of all the VW crossover SUVs, inside and out. In the cabin it's a simple trick of adding some coloured trim into the dashboard and door panels; lease anything above a base model T-Roc and you'll be afforded the option of body coloured plastic. If that sounds flippant it's not. It makes a big difference, really lifting the cabin.

The exterior is equally as...well, exciting isn't quite the right word, but Volkswagen's designers were clearly given a bit more creative freedom with the T-Roc than they were with the Tiguan, T-Cross or Touareg SUVs. It's not only noticeably more rakish than those things, it's also available with two-tone paint options and funkier wheel designs, all of which add up to an appealing looking thing. Again though, you'll have to spend a bit more to have those options available to you.

The Interior And Features Of The VW T-Roc 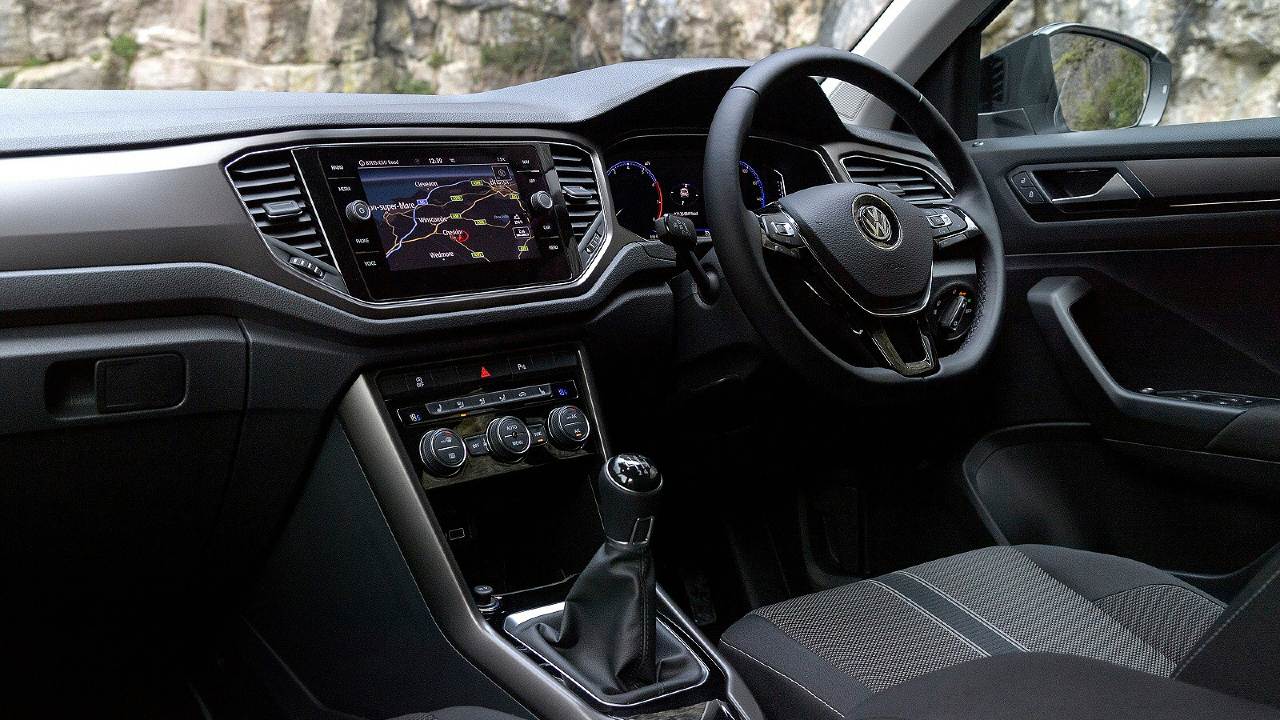 The T-Roc has…say it softly…personality. Which is a good job because the quality of the interior plastics is about on par with the plastic you'd find in an eBay Botox kit. Not really, but it is way below the soft-touch stuff you'd find in a Tiguan, or even a Kamiq, Skoda's smallest crossover SUV. But does that really matter to you? Would adding a panel of soft touch material along the top of the dashboard make you feel like this is a better car? Possibly, but it would also make the T-Roc more expensive to produce and, therefore, buy.

Instead, Volkswagen has made the cabin feel hardwearing, in a basic sense, and has also specified it to keep costs down. Lease an S model and while you'll get all the requisite kit to make the T-Roc feel like money well spent – touchscreen media, climate control, alloy wheels, emergency city braking – but the cabin won't have any splashes of colour and it will feel a little, well, basic. A little bereft of the personality of models mid-spec and upwards.

But as per any Volkswagen, the basics of a good driving position are on point. There's loads of steering wheel and seat adjustment, and the touchscreen is a doddle to get accustomed to. It just doesn't feel as well made, as sumptuous, as the Volkswagen Golf or even the Volkswagen Polo. High-riding space and visibility are what you're paying for here. 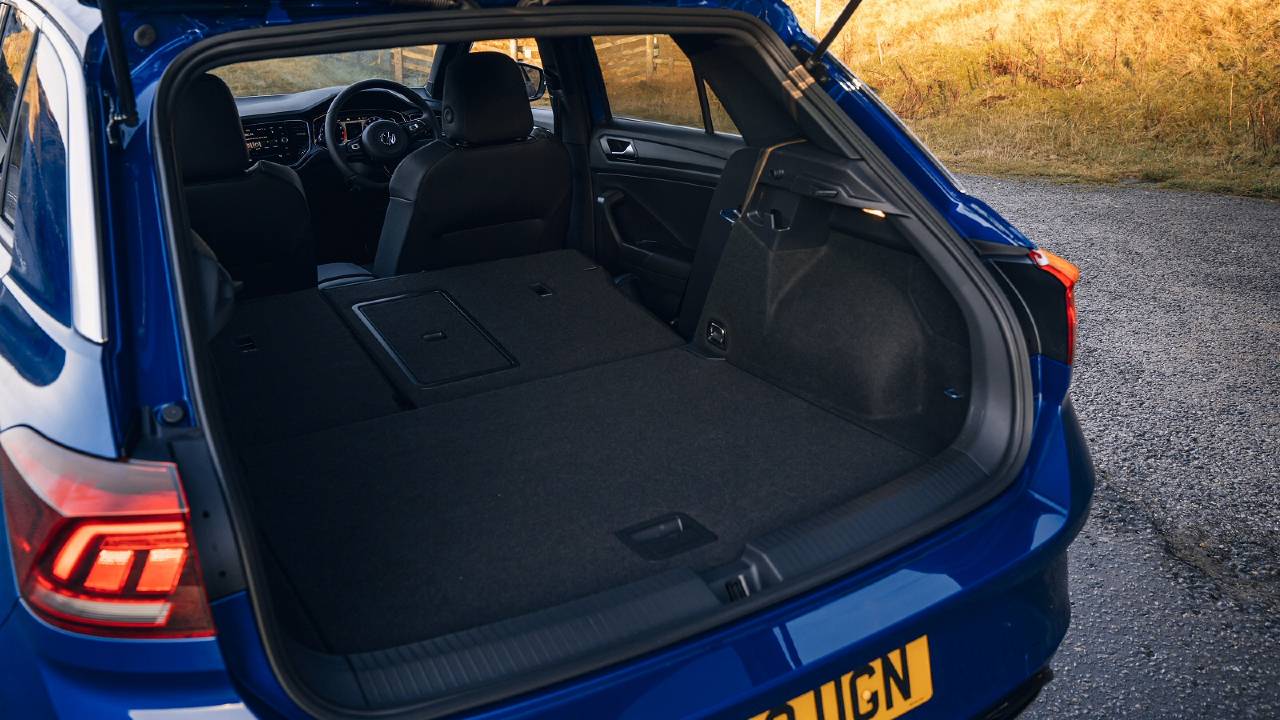 At this stage it would be very easy to get all bogged down in wheelbases and overhangs and boot volume but it's enough to say that the T-Roc here pulls off a cool dimensional trick in that it feels almost as spacious as a Tiguan, and a lot more spacious than a T-Cross, while still feeling small on the road. Town friendly, that is. Easy to move about. Not too clunky for a tight multi-story car park.

There's a little trade-off between cabin space and boot space though. So, on the one hand the boot is a little smaller by volume than the smallest Volkswagen crossover, the T-Cross (445 litres in the T-Roc against 455 litres in the T-Cross), but on the other there's a significant amount of rear space here. The T-Roc really does feel like a family car, big enough for five adults in terms of leg, head and shoulder space.

And let's be honest, the boot is hardly small: 445 litres is substantial by any standard and it stretches to 1290 litres with the rear seats folded flat. Both those numbers are higher than the latest Volkswagen Golf can muster (381-1237), and aside from that the T-Roc's boot has been designed with user friendliness in mind. The loading bay is twin level and in its higher setting sits near enough flush with the boot lip, meaning it's easy to slide heavy items in there; if you were about to steal part of Stonehenge, better to slide one of those big rocks into a T-Roc than drop it into the boot of a golf.

The twin floor also means there's a bit of storage underneath it, should you want to hide things away, plus the rear seats fold down flush and are 60/40 split-folding as standard. The boot walls have a couple of bag hooks built into them too, which could mean the difference between your eggs being smashed on the way home and remaining intact.

Volkswagen has made a separate thing of its electric stuff, meaning it'll all eventually be produced under the 'ID' banner. That means models like the T-Roc don't get hybrid or full electric drivetrains and never will. As such you're looking at a standard range of Volkswagen Group petrol and diesel engines, all of which are in use throughout the full range of small-to-medium cars from VW, Skoda, SEAT and Audi.

The range kicks off with a 1.0-litre 115hp TSI petrol, a three-cylinder turbo engine that lacks poke but is actually a lot more pleasing than you might think. More on which in the next section. It returns a claimed 47.7mpg average with 134g/km CO2, which in reality means you'll achieve late 30s around the doors or about 50mpg if you do a lot of motorway stuff. And if you're careful.

Pick of the bunch, for us, is the 1.5-litre TSI EVO four-cylinder turbo petrol engine, which has the same torque figure as the 1.6 TDI (250Nm, that is) but is much, much quieter and, by nature, keener to rev. On paper the 45.8mpg WLTP economy figure might not look too appealing, but the reality is that you'll need to work this engine far less than you will the 1.0-litre petrol, and so the real-world disparity is less significant. 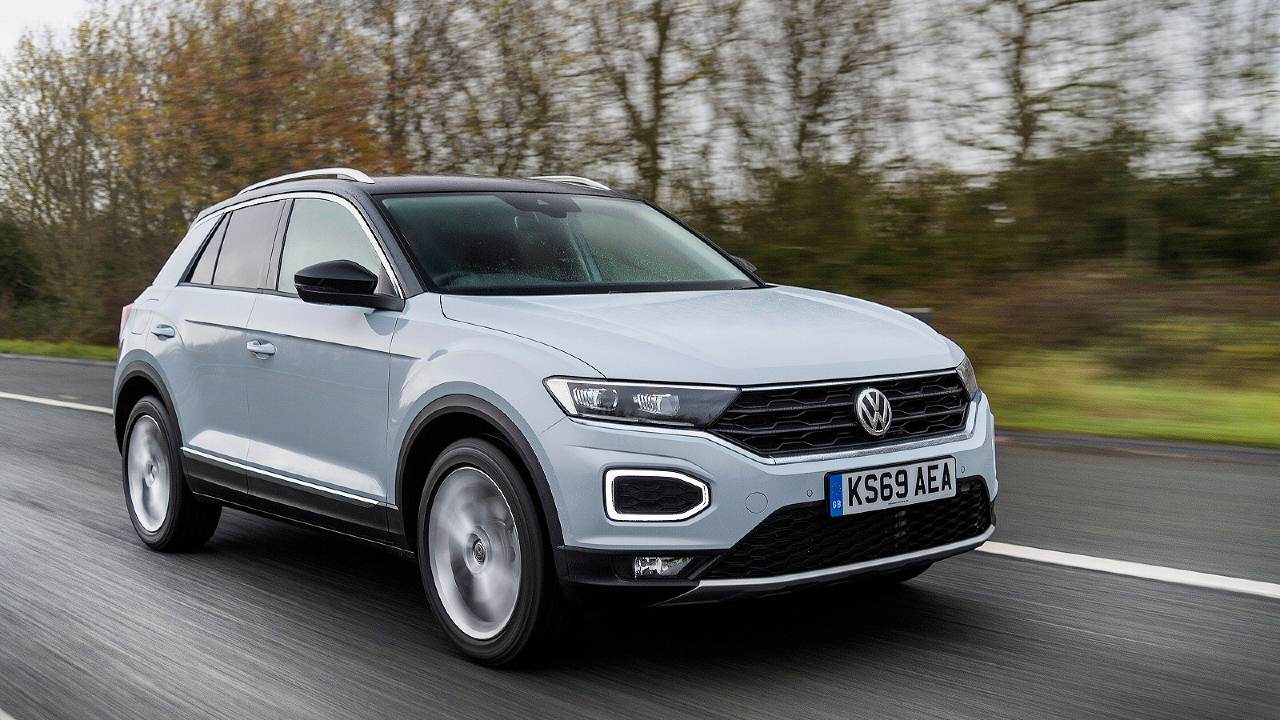 The T-Roc really does do the job of being a high-riding runaround just as well as a Tiguan. Better in some ways. It's not as plush as a Tiguan or a Golf in the way it rides, not quite as well dampened down, but it feels like that was engineered in deliberately. It's nice enough, without treading on the toes of VW models that are supposed to feel fancier.

Get it on the motorway and there's quite a lot of wind noise rushing past the pillars, like you're pushing a shoebox through a hairdryer all of a sudden. But around town it's much better. It's quiet and it rides very well. The tallness of the suspension is a strength here because the extra movement soaks up most of the road's irregularity, and yet it doesn't wallow about.

And for that reason it is quite good fun to drive. More hatchback-y than SUV-ish, and much better than you probably expect it to be. It's a bit sharper, a bit less messy through corners than it could have been, given its height and its job in general. It's so pleasantly competent that it feels like it suits a manual gearbox too, which is rarely the case in this sort of car. You can see why VW had the confidence to make a proper R version of this with 300hp. And yet, you get all the benefit of that thing that people buy these cars for: the top-down feeling of visibility.

Of course the vast majority of these aren't going to pack 300hp. They're going to have half that, or less. But that's also not as depressing as it could be, at all. Even the basic 1.0-litre TSI petrol, which has near enough a third of the power of the R model, is surprisingly good. It's not quick (0-62mph in 10.1 seconds), and in fact, it has so little torque below 2000rpm that pulling away from junctions in 2nd gear is a foot mashing nightmare sometimes, but it's economical, it rewards being revved, and it sounds nice.

The T-Roc really feels like it's in a lovely sweet spot for a family buyer looking for a decent amount of space, kit and quality and for a good price. The fact that it drives well is a bonus.

There are plenty of crossovers to choose from now, lots of them with better individual qualities than this. If the T-Roc looks like it might be a bit small for your needs see how it compares to the larger Tiguan in our head to head article. The Ford Puma is much more engaging to drive. As is the MINI Countryman, a car that has much more personality than the T-Roc too. The Kia Niro feels higher quality inside and has more kit as standard. And the Audi Q2 trades off a little space for a lot more prestige and quality.

But, overall, very few crossovers blend so many good qualities as appealingly as this does. It's more spacious than the Puma, better value than the MINI and more interesting than the Kia. A great family car for a reasonable price. We can see why it's so popular.

More On The T-Roc

Volkswagen Tiguan v Volkswagen T-Roc
The T-Roc and the Tiguan from Volkswagen are both fantastic midsized crossover-SUVs. But what are the key differences between them, and which is the best one for you to choose?Read More
Volkswagen Tiguan R Review
Our motoring expert Matt Robinson takes the Volkswagen Tiguan R for a spin in our latest review.Read Review
What Is Volkswagen 4Motion?
You’ve probably heard the unusual term ‘4Motion’ mentioned in connection with some Volkswagen models, but what, precisely, is it? Well, we’re here to talk you through it and explain what 4Motion is.Read Guide