Why Lease the Jaguar Xj? 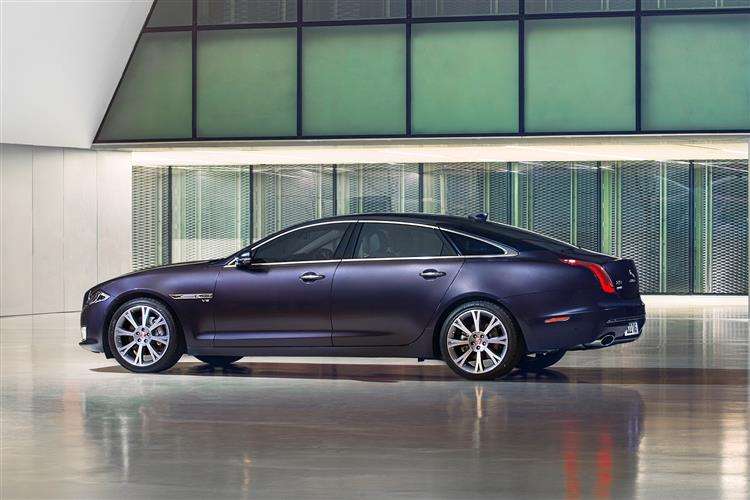 Jaguar's rejuvenation continues with this improved version of the company's flagship XJ luxury saloon. The experts at Car & Driving check it out....

With startling looks that combine with clever lightweight aluminium construction, Jaguar's XJ saloon is now a firmly established choice amongst top executives who don't want something from one of the German brands in the top luxury sector. Now it's been significantly upgraded, with stronger standards of safety and infotainment, plus there's a potent flagship XJR575 model.

In the past five years, Jaguar has changed public perceptions. It's now a very cool brand, making high-end products that are tasteful, powerful and ultimately good to look at. With mediocre models long gone, the Big Cat is back and purring. Now recognised as one of the most prestigious carmakers in the world, this British brand, now well established under the ownership of Indian firm TATA, is bringing a whole range of fresh models to market - at the same time as significantly improving its existing designs, cars like the XJ luxury saloon we're going to look at here. With rivals like BMW's 7 Series, Audi's A8 and the Mercedes S-Class all having lately upped their game, this XJ has been treated to a further significant upgrade with includes the addition of a potent range-topping XJR575 variant. As before, there are short and long wheelbase bodystyles and either way, ultimate luxury has been prioritised. Certainly, there's classy engineering on offer here in a car that's refined, comfortable and powerful - everything in fact, that you'd expect a Jaguar to be.

Engine-wise, buyers can opt for a 300PS 3.0-litre V6 diesel or a 340PS 3.0-litre V6 petrol unit. If you fancy more power, then you could always choose the 5.0-litre V8 petrol powerplant, an engine offered with two power outputs, 510PS or 575PS in the most potent XJR575 flagship model. Performance in a straight line is epic even from the entry-level 300PS 3.0-litre V6. This variant will complete the benchmark sprint in 5.9 seconds and has a top speed of 155mph. The most powerful engine in the range, the 575PS 5.0-litre V8, will reach 62mph from a standing start in 4.4 seconds and goes on to 174mph. On the move, those familiar with earlier versions of this car should notice an electric power steering system that's more feelsome these days. Refinement as ever is impressive, the cabin well insulated, particularly at motorway speeds. It's driver-focused too: a beautiful place to be. The fully independent suspension is similar to that in the XF but drivers have the option of choosing standard, Dynamic or Winter settings via the JaguarDrive rotary knob that takes the place of a conventional gear lever. These modes adjust the suspension, throttle response, gearshift speeds, stability control settings and the active differential to produce the desired results. The gearbox itself is an electronically-controlled six-speed auto complete with wheel-mounted paddle shifters which sends drive to the rear wheels on all XJ models. Jaguar is intent on this XJ being seen as a real driver's car.

In both short and long wheelbase guises, the sinewy lines of the XJ serve to emphasise its sporting intent. The front end borrows heavily from the XF, the sharply contoured bonnet and the wire mesh grille that juts forward from the plain of the headlights giving it real presence. The full LED headlights come with 'active front steer', 'static bend' and 'auto high beam assist' functions. The front end features a large, upright grille, while sculpted chrome blades in the outboard air intakes aim to emphasise what Jaguar sees as the car's 'mature, prestigious character'. LED lights at the rear feature a more distinctive night time signature. On the inside, the cabin is a fabulous place to spend time in. The craftsmanship is first class and the materials used for the switchgear and on the dash are of top quality. If you can stretch to top 'Autobiography' trim, you'll enjoy plush 'semi-aniline' leather and classy inlay veneers. All variants get the latest version of Jaguar's 'InControl Touch Pro' premium infotainment system, which now features a larger 10-inch centre-dash screen, this set-up allowing a de-cluttering of buttons on a central console that's pleasing to the eye. As before, the cabin's very spacious, as is the boot, at 520-litres in size.

As before, pricing sits mainly in the £60,000 to £75,000 bracket - on a par with the likes of the Audi A8 and the Mercedes S Class. Bear in mind though, that XJ models tend to come better equipped than their German rivals. There are six trim levels - 'Luxury', 'Premium Luxury', 'Portfolio', 'R-Sport', 'XJR' and 'Autobiography'. Engine choice will b the other inevitable determining factor in what you pay for your XJ. The entry-level 3.0D SWB model in 'Luxury' trim starts at around £60,000. If you want a sportier petrol option, you'll have to pay a £15,000 premium for the 3.0-litre variant. Standard equipment includes smarter LED headlights and classier leather inside, plus Jaguar's much improved 'InControl Touch Pro' infotainment system with its larger 10-inch screen. Included safety kit runs to the usual things - dynamic stability control (the 'Trac DSC' set-up), twin front, side and curtain airbags, front seats with a whiplash protection system, a blindspot warning set-up built into the door mirrors and a pop-up bonnet to improve protection for pedestrians. Jaguar has now added in a suite of standard camera-driven safety features, including 'Autonomous Emergency Braking', 'Lane Keep Assist' and 'Driver Condition Monitoring'.

Luxury saloons in this sector of the market are not going to be cheap to run, However, if you opt for the 3.0-litre diesel engine, then this XJ will return reasonable economy thanks to a claimed combined cycle figure of 49.6mpg and a CO2 emission level of 149g/km. Servicing costs will inevitably be high as parts such as brakes and tyres for Jaguars are expensive - but then this is no different to rivals including the Audi A8 and the BMW 7 Series. Opting for the flagship 575PS V8 engine will of course see your running costs soar. This top variant has a claimed combined consumption figure of 25.5mpg and emits 264g/km of CO2. Insurance groupings lie between groups 48 to 49 (which is on a par with rivals) and there's a three-year/60,000 mile warranty.

There's no doubt that this XJ remains an outstanding technical achievement. But then the same can be said of many of its rivals. Where this Jaguar is different though, can be summed up in that one simple but very telling word 'character'. Rather than being merely a larger version of an existing model, this is a stand-alone design in its own right. As a result. it feels special in a way that German rivals struggle to match. More importantly, this car's unique selling points aren't only restricted to the way that it looks. Even if you don't agree with Designer Ian Callum's vision of the future of luxury motoring, you'll have to admit that the cabin is on another level from its rivals, even if it can't quite match them for space. And it offers the kind of involving driving experience you simply wouldn't expect from a car of this size. Bold and ferociously modern, this is a car you can bond with - and a luxury saloon that it's very difficult to ignore.