Why Lease the Maserati Grancabrio? 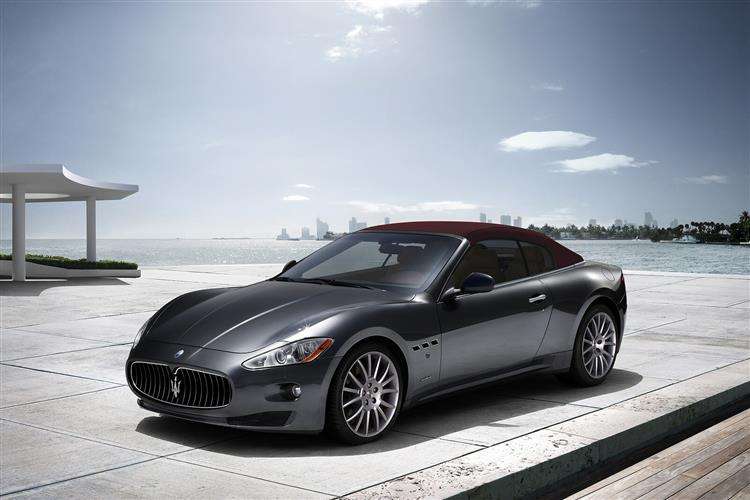 Maserati wants its vehicles to have style and luxury as well as high performance. Jonathan Crouch checks out the latest version of the desirable GranCabrio.

Maserati is a car brand that conjures up all the right images. The problem was that for too long, the achingly cool Italian heritage was fronting up for a lacklustre product range. The good news for anyone with a soft spot for the classic Maseratis of the 50s and 60s, or a spare hundred grand to spend on a luxury saloon or sportscar, is that the company looks to have turned the corner. The latest crop of cars is worthy of the trident badge and none whisper Maserati more seductively than the GranCabrio.

Pretty? Check. Thunderous V8 engine? Check. Luxurious leather-clad interior? Check. The Maserati GranCabrio has proved to be a fine demonstration of where the Maserati is going in the modern era and has recently received its final package of updates. If you're lucky enough to have £110,000-£120,000 to spend on a sports convertible, you would be remiss not to consider it.

So the time has come to reward yourself with a really desirable six-figure sportscar, something with an open-top, a classic badge and an engine to die for. We're talking a step above the German premium brands here. After all, you can feel proud to have a cabriolet Mercedes or Audi in the driveway but your choice won't stop the traffic. Here's a car that will. Maserati's GranCabrio. It's a rather unique choice too. In the luxury convertible class, hardly any of the options on offer have proper rear seat space for four and those that do, Bentleys and BMWs, are anything but cutting edge sportscars. This Italian, in contrast, claims to offer everything. A Ferrari engine note, sharp driving manners and room in the rear to share the experience with a couple of fortunate friends. What could be better?

Engine choice isn't a Maserati forte and those with an aversion to petrol V8s will need to look elsewhere. It's a good thing that there's very little not to like about the hugely charismatic 4.7-litre engine that powers the GranCabrio and the other modern Maseratis. With 453bhp at 7,000rpm, owners can expect that sportscar intensity at the top end with a beguiling exhaust note to match but there's also 490Nm of torque at 4,750rpm, so it should be perfectly possible to leisurely waft the GranCabrio around at speeds more suited to showing-off. A 180mph top speed and 5.0s 0-62mph sprint time will leave nobody in any doubt as to the car's potency. Two versions are on offer, the entry-level 'Sport' variant and the more dynamically-focused 'MC' variant, which gets more agressively firm suspension. Both use the same engine and drive through a 6-speed ZF auto gearbox. The Maserati Skyhook suspension system is included as standard on the GranCabrio. It integrates with the MSP safety system and the automatic paddle-shift gearbox to adjust the car's damper settings according to the driving conditions. It can also be locked in to Sport mode for a firmer ride and better body control when you're looking to make the most of the GranCabrio's performance. Braking is by Brembo with the aid of dual-cast brake disc technology for optimum stopping performance.

A Maserati should be beautiful and with the GranTurismo, this manufacturer showed it has regained a firm grip on what makes a car gawp-worthy. The GranCabrio appears to have shed none of the coupe version's elegance and poise in the process of loosing its roof. The replacement for the hard-top is a traditional canvas item that takes a leisurely 28 seconds to lower, but then, the GranCabrio is touted as a full four-seater convertible and a 2,942mm wheelbase would appear to back this up. The roof has a lot of cabin to cover and should be forgiven for taking its time. At least the conversion process can take place at speeds of up to 19mph. The advantages of a canvas roof are clear for Maserati. As well as being the traditional method by which classic open-topped models like the A6G Frua Spyder, 3500 GT Vignale Spyder and Mistral Spyder kept the weather out, it helps the car retain its aerodynamic shape and optimum weight distribution. The GranCabrio has the same high level of aerodynamic performance as the hard-top GranTurismo, a lower centre of gravity and the same slightly rear-biased weight distribution. Inside, it's all hand-crafted leather and the big news with this revised model is the installation of a new centre-dash touchscreen infotainment system. As promised, there's more back seat space than most rivals can offer: this really is a genuine four-seat convertible.

There are two GranCabrio models, the 'Sport', which costs just over £107,000, and the more stiffly-sprung 'MC', which will set you back just over £115,000, making it the priciest Maserati you can buy. Potential customers may also have considered top-end versions of the Mercedes SL, the Aston Martin Vantage Roadster and Porsche's 911 Cabriolet but even in this company, the Maserati badge holds a powerful allure. Great pride is taken by the brand in its ability to offer a whole host of bespoke trim and colour options to its customers. With 14 exterior paint shades, six different canvas colours for the soft-top roof, a variety of interior leather options and cabin trim finishes ranging from Dark Chrome to Moonwood, there's huge scope to let your personal taste, or lack thereof, to run wild. Included is a BOSE audio system and an advanced dual-zone climate control system. There's even a bespoke luggage set specially designed to fit the 173-litre boot on the options list.

Assuming you're imagining that some seriously prohibitive running costs will accompany the GranCabrio, the running costs aren't as frightening as you might imagine. The car returns around 19mpg on the combined cycle but you might get as much as 25mpg on the open road if the temptation to plant the throttle can be resisted. CO2 emissions are measured at 337g/km, so taxation will be hefty but that's about as predictable as the group 50 insurance. None of this matters unduly in a car costing £110,000-£120,000 and owners could always plant a hectare or two of forest in their back garden to salve their environmental conscience.

Many will buy this car simply because it's a Maserati. And because it looks drop-dead gorgeous. The difference though, with this Trident badged-brand in the modern era is that its products also stack up on more sensible grounds. Some will rightly point out that this is a vastly more expensive car than obvious alternatives. But it's also true to say that most actual Maserati buyers wouldn't regard a Jaguar F-TYPE or even a Mercedes SL as a 'obvious' rival. These, they would say, are merely cars that you buy if you can't quite afford a GranCabrio. If you can and want the option of carrying two adult rear seat passengers in something still describable as a 'proper sportscar', then it's hard to think of a better choice, though you'll need to take that tiny boot into account before thinking of too much Grand Touring.