Why Lease the MG ZS Hatchback? 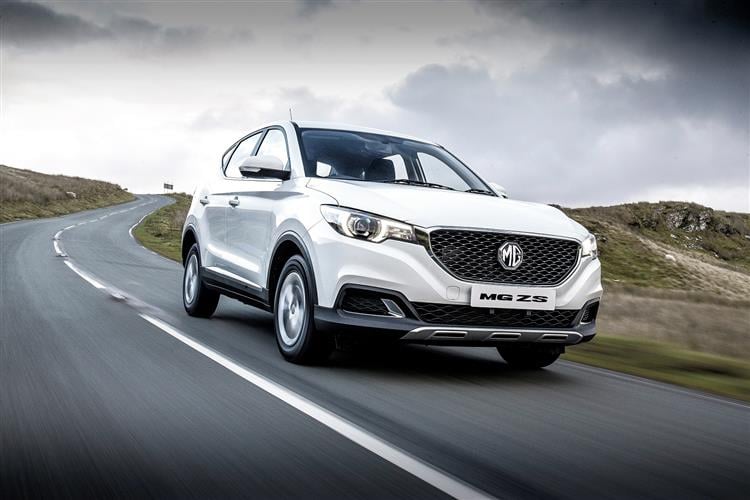 In seeking a small B-segment SUV, you probably won't have considered the MG brand as an option. Ought you to? Jonathan Couch looks at the MG ZS and decides.

The ZS is MG's first properly credible fully class-competitive model. A small B-segment SUV rivalling cars like Nissan's Juke and Renault's Captur, it's much better suited to European buyers than the brand's previous Chinese-era designs. But it still manages to undercut small class rivals by a significant amount on price.

Students of MG history will be very familiar with the MG ZS. Launched in 2001, it was a re-badged, sportier version of the Rover 45 saloon that sold until the wind-up of the MG Rover business in 2005. Thank goodness, this new-era MG ZS is nothing like that and it's made by a company that has very little in common with the way the brand was back then. We all know that MG is Chinese-owned these days. And many are now also aware that the company no longer bothers to build its cars in Longbridge from shipped-in kits in order to preserve some semblance of British identity. Going forward, the manufacturer must be able to offer truly class-competitive models able to deliver more than just low pricing. This ZS B-segment SUV is the first of them, and its task is to do nothing less than double this maker's sales in our market.

Engine-wise, ZS buyers can choose between two petrol engines, there being no real demand for diesel in this segment. The entry-level option is a 1.5-litre VTI four cylinder unit with 105bhp mated to a five-speed manual gearbox. Much more modern though, is the alternative 1.0-litre GDI three-cylinder 110bhp turbo unit, which is also offered with a six-speed automatic gearbox option. With a manual shift, the 1.5-litre variant can get to 62mph from rest in 10.9 seconds en route to 109mph. That's over a second quicker than the equivalent version of the rival Nissan Juke. The Chinese brand says that this ZS has been extensively tested on UK roads and developed for UK drivers. In other words, it's much more dynamically tailored to European needs than its larger GS SUV stablemate. To that end, if you avoid entry-level trim, you'll find that the steering comes with a choice of three selectable modes - 'Urban', 'Normal' and 'Dynamic'. The 'Urban' setting offers a lighter and quicker response at low speeds and when parking. Alternatively, the 'Dynamic' mode is designed to increase the steering effort, deliver a higher damping effect and increase the centre definition at medium and high vehicle speeds. The 'Normal' steering option aims to deliver the best all-round fit to MG's tailored suspension set-up.

We're told that the ZS showcases the future design direction for MG, expressing an 'Emotional Dynamism' which is set to feature across all upcoming models. A distinctive enlarged, full frame grille inspired by the famous brand's heritage dominates the front end. Elsewhere, there's plenty of MG branding and a smartly-fashioned nose that aims to give the car a refined look, one carried through to its sweeping corners and solid backend. Headlights are also a key design feature, with a massive 23 LEDs creating a design statement in each one. Inside, you get SUV C-segment 'Qashqai'-class standards of space for SUV B-segment 'Juke'-style pricing. For reference, the XS is 179mm longer, 44mm wider and 46mm taller than the Juke. In fact, this MG offers one of the most generous shoulder, leg and headroom capacities in its segment, the cabin providing around 55mm additional rear shoulder room and 80mm rear headroom than the segment average. A spacious 448-litres of cargo capacity (some 60-litres larger than is typical for a supermini-based B-segment SUV) is welcome, as is the split-level boot, which provides plenty of room for prams, luggage, outdoor leisure equipment or the weekly shop. Keen cyclists and adventure sports fans will benefit from numerous compartments throughout the car which provide additional storage.

There are three trim levels, 'Explore', 'Excite' and 'Exclusive'. Like all MG models, this one's certainly affordable. The entry-level version is available on the road from around £12,500 - around £2,500 more affordable than the equivalent Nissan Juke. Plus, as you'd expect, there's also a full range of competitive finance offers. For example, for £199 per month, you can get yourself a top-of-the-range 'Exclusive'-trimmed manual variant, with £3,550 deposit and 0% finance. There's plenty of equipment too. Inside, an 8-inch touch sensitive infotainment screen is supported by DAB radio (on the 'Exclusive' and 'Excite' models), while Bluetooth hands-free and remote central locking is available across the range. Cruise control is also included, while air conditioning comes as standard on 'Excite' and 'Exclusive' models, and satellite navigation and a rear camera are standard on the 'Exclusive' variant. Headlight day/dusk sensors are standard, even on the entry-level 'Explore' model. Avoid entry-level trim and you also get the 'Apple CarPlay' smartphone-mirroring system for the centre-dash screen. This means you can get directions, make calls, send and receive messages and listen to music, all in a way that allows you to stay focused on the road. As you'd expect, there's a wide range of (most extra cost) colours, including a specially-developed tri-coat 'Dynamic Red' paint option.

We didn't expect the ZS to deliver class-lading efficiency stats and it doesn't. It gets pretty close to the class standard though. The 1.5-litre petrol model manages 49.6mpg on the combined cycle and 129g/km of CO2, which is basically the same as a rival Nissan Juke 1.2 DIG-T. It's also miles ahead of the base 1.6-litre Juke variant, which is much closer to a ZS on price and can only manage 47.1mpg and 138g/km. The ZS also has a larger fuel tank than the Juke, so there'll be less need to fill its tank. You also get one of the longest fully transferable warranties in its class, a 7 year/80,000-mile package being standard across all variants. Rivals such as SsangYong, Hyundai and Toyota only provide 5 years.

Here at last is an MG we can whole-heartedly recommend. That doesn't make this ZS model a B-segment SUV class leader but it does mean that you could enjoy the large price saving this car offers over mainstream rivals without feeling that you'd opted for a significantly inferior product. In fact, there are plenty of things about this ZS that you might conceivably prefer to some rivals. Maybe the looks. Possibly the multi-mode steering system. Probably the long 7-year warranty. Certainly the improved levels of equipment. Is it the best car in the sector? No. Is it the best really affordable model in the class? Almost certainly, yes. For MG, that represents a big step forward.