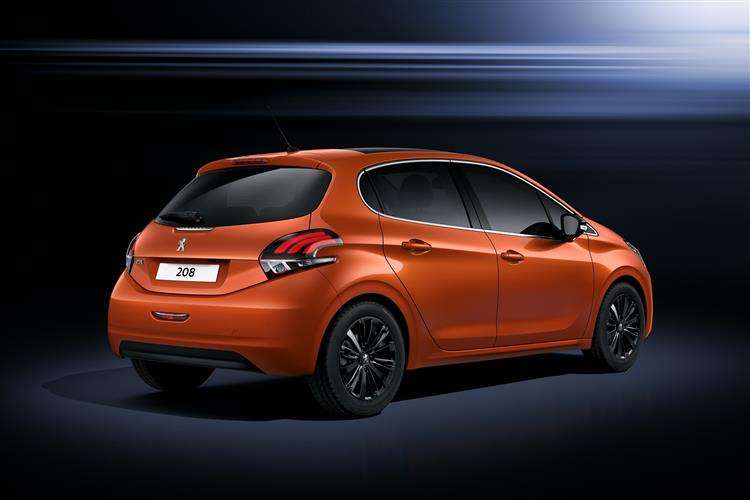 Peugeot says that with this second generation 208, it wanted to create 'the sexiest small hatch in the purest way'. Certainly, no effort's been spared here: there's a new platform, a fresh look and a completely redesigned interior, all of it targeting what the brand hopes will be a younger buyer. There's an all-electric version too.

What exactly should a supermini be? Affordable? Economical? Practical? All these things are important of course, but if you're a car maker and that's all you create to sell in this segment, then you'd better be prepared to sell it very cheaply. Even in this humble category you see, buyers are now expecting more in terms of style, innovation and technology. In fact, they're expecting something more like this, Peugeot's MK2 model 208. This, the latest in Peugeot's long running line of 'two zero' cars could hardly be more important for the French brand. It switches the company's supermini on to a properly modern chassis, the CMP platform for B and C segment cars that's shared with the DS 3 Crossback and the new Vauxhall Corsa. Crucially, this can support both fossil-fuelled engines and all-electric powertrains - and does in this case. As a result, Peugeot reckons it has an answer in this car no matter what the target customer is looking for. Perhaps.

Engine-wise, there are three petrol units and a single diesel to choose from. If you know the Peugeot brand, you might not be too surprised to hear that the available petrol units are both 1.2-litre three cylinder PureTech powerplants, in this case developing either 100 or 130hp. The lesser unit is optionally available with an 8-speed EAT8 auto gearbox. The 130hp engine gets the auto 'box included. We've not previously seen an automatic with 8-speeds in the supermini sector. The diesel is the company's usual 1.5-litre BlueHDi engine with 100hp. As for the all-electric e-208 version, well just one variant of that will be available featuring a 50kWh battery mated to a 100kW electric motor, this confection developing a healthy 134hp. Of course, as you'd expect in a modern supermini, you can get all the usual driver assistance features. things like lane keep assist to stop you from drifting out of your lane, with subtle steering intervention to ease you back to where you ought to be. And an autonomous parking system which is capable of automatically controlling acceleration, braking and steering when entering or leaving a parking space. there's also a traffic sign recognition system that can work with the integrated speed limiter and make sure that you never exceed the stated limit of the road you're on.

The second generation 208 is larger, lower and wider than its predecessor and borrows inspiration for its silhouette from the brand's old 205 supermini of the Nineties. The base of the windscreen has been pushed back and there's more of a shoulder line to the bodywork below the window line. At the front, there's a large, intricately detailed grille with triple white LED headlights and some eye-catching LED daytime running light 'fangs'. At the back, the lines are more curvaceous and defined than with the previous model, the rear screen is more angled and there's a glassy black centre section housing triple red LED lights on each side. Inside, this 208 gains Peugeot's 'i-Cockpit' design philosophy in its latest form. There's a classy 3D driver display and a central TFT infotainment screen available in 5-inch, 7-inch or 10-inch sizes, depending on spec. A really nice cabin detail is the fold-down flap under the 'piano key'-style keys that decorate the centre console, concealing an area which can house your smartphone in several different ways while it charges - either inductively or via two charging points. And the area has an angled lip so that you can view your 'phone's screen while it's charging. At the back of this 208, you'll find decent passenger space for a car of this size. And Peugeot's keen to point out that the e-208 all-electric version has the same amount of rear seat legroom and boot space as the fossil fuelled derivatives.

Expect pricing for this second generation 208 to be relatively little different to that of the previous model. That car was priced at the upper end of the volume branded part of the supermini segment, which means that the figures being asked this time round are likely to lie mainly in the £17,000 to £20,000 bracket. You'll need a bit more than that for the e-208 all-electric version of course but as usual with an EV, that derivative qualifies for the government's £3,500 Plug-in car grant. With the e-208, access to charging points via the PSA Group's 'Free2Move' service is included. As you'd expect, a wide range of driver assistance and safety technologies are available this time round. Go for the auto gearbox (or an e-208 model) and the adaptive cruise control system you can have has the ability to make the car automatically stop and go in heavy traffic. You can have this system with a manual gearbox too, where it operates down to 18mph. Lane departure warning, auto parking and blind spot monitoring systems are available too. Go for a variant with the largest 10-inch centre dash infotainment display and you'll get built-in navigation, plus 'Apple CarPlay'/'Android Auto' smartphone-mirroring.

Expect the 1.2-litre PureTech petrol variants that most will buy to be very acceptably clean and frugal. With the 100hp model, you can expect to manage around 45mpg on the WLTP combined cycle and return a CO2 reading not much over 100g/km, which is pretty good going for a car in this segment. The 1.5-litre BlueHDi diesel version of course does much better. Over 60mpg on the combined cycle should be eminently achievable, along with a sub-100g/km of CO2 reading. But of course if you're really interested in ecological efficiency, there'll be just one variant of this car that'll interest you, the all-electric e-208. For this derivative, Peugeot claims a WLTP-rated driving range between charges of 211 miles. And fast charging at the rate of 100kW is available via a CCS socket hidden behind the fuel cap, with an 0-80% charge achievable in around 30 minutes. If you install a wallbox at home, you can recharge the battery from empty in around five hours if you have an 11kW electricity supply - or in around eight hours with a 7.4kW supply. Bear in mind that the e-208 is around 350kgs heavier than the ordinary version.

So the 208 has evolved - but not beyond recognition. In improving it, Peugeot has certainly tried to cover all the bases, while being very conscious that trying to please too many people too much of the time is a sure-fire recipe for failure - or at the very least, a distinctly compromised and forgettable end-result. 'It's OK to have 20% of people not liking this car', the company's MD used to say, 'as long as the other 80% love it'. This time round, we reckon his brand doesn't have too much to worry about. There may be a few supermini buyers who don't like the cabin layout, want something better suited to cornering on its door handles or who might prefer the value proposition of a budget brand - but I'm guessing they'll be in the minority. Most will recognise that in this 208, Peugeot has perfected for us the supermini it was always capable of. A smart small car choice - in more ways than one.