The Peugeot 208 is arguably one of the most stylish, desirable supermini cars in its class. That means it’s up against the massed ranks of talented small car opposition including the Ford Fiesta, Volkswagen Polo, Toyota Yaris, Renault Clio and more, but it manages to stand out with its eye-catching looks and top-quality cabin.

Available with regular petrol and diesel engines, the 208 forges ahead of many of its rivals due to the fact there’s a pure electric version of the Peugeot called the E-208 – and, bar some very subtle exterior details, this electric car looks identical to the normal cars. Here’s the lowdown on one of our favourite superminis of them all. 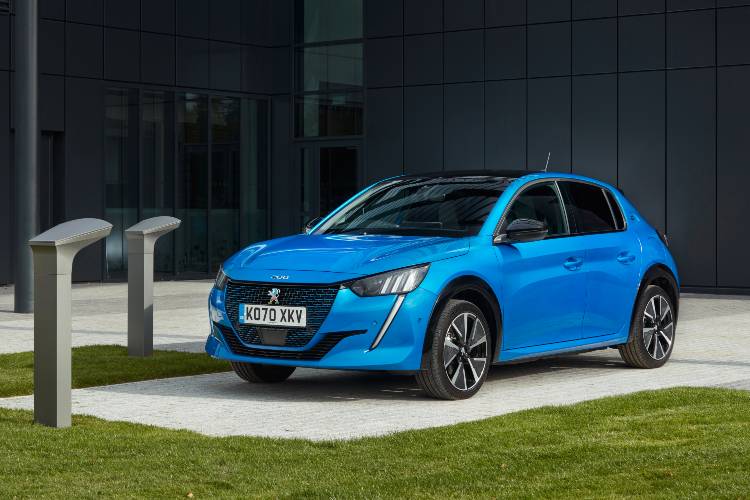 The Peugeot 208 has concept-car-like looks. When it was revealed at the Geneva Motor Show, its striking features were bold and daring for what it traditionally a conservative class of vehicle. Be warned, to get it looking its absolute best, you do need to step up the ladder of 4 specifications – Active Premium, Allure Premium, GT Line and GT Premium – a bit, but all models come with those defining ‘Tooth’ LED daytime running lamps in the front. You need an Allure Premium for the ‘claw-effect’ triple-barred rear lamp clusters, however, and then at least a GT to have the same light signature in the full-LED headlamps, but if you do then the Peugeot looks better than anything else in this class. GT and GT Premium cars also have a contrast black roof, for the sportiest appearance in the line-up.

For more on the stylish 208, take a look at our comprehensive colour guide. 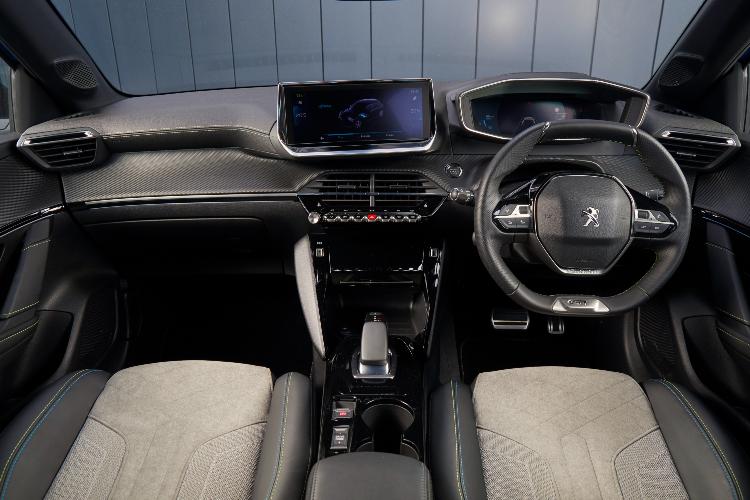 Inside is one of the best cabins in the class, in terms of material finishing and the classiness of its design, but we have to report all aspects of a car and, for some, the idiosyncratic iCockpit layout doesn’t work as well as a traditional fascia. Peugeot has had to fit the 208 with a tiny, low-set steering wheel beneath a high-mounted digital instrument cluster, and if you’re particularly short or tall, it sometimes means it’s not easy to see all the dials in the cluster without moving your head about. It hasn’t affected us, average of height as we are, while driving the 208 but we know of plenty of people who don’t get on with iCockpit. That might apply to you – the only way to check is to sit in the Peugeot yourself and literally try it out for size. 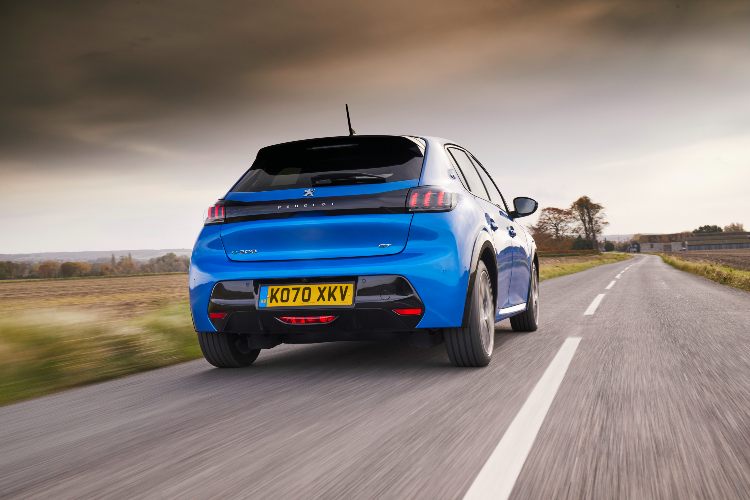 Peugeot has a reputation for chassis excellence and the 208 exemplifies that, even if it’s perhaps not the most exciting thing in the supermini sector to drive right now. One of the problems is that many of the 208’s predecessors had high-performance GTi versions – most famously, the 205 GTi of the 1980s and ‘90s. However, this generation of 208 currently has no more than 136hp and there are, as far as we’re aware, no immediate plans to change that fact.

Having said that, the engines which are offered are all great options, with the possible exception of the base 1.2-litre 3-cylinder 75hp petrol, which lacks for a turbocharger and therefore much in the way of torque – you’ll be working its standard-fit 5-speed manual gearbox often if you opt for this derivative. You’re far better off going for the 100hp PureTech version of the same engine, which DOES have a turbocharger and is therefore much more pleasant and easy-going to drive. It comes with either a 6-speed manual, as standard, or the option of an 8-speed automatic gearbox known as the EAT8.

There’s also a 1.5-litre 4-cylinder BlueHDi turbodiesel with 100hp and the 6-speed manual ‘box only, which has lots of torque and great economy figures, while the fastest internal-combustion model is the 130hp PureTech petrol. It uses the same 1.2-litre turbo engine but tuned up for horsepower and torque, and it comes with the EAT8 auto only.

Any of these cars have good steering, impressive body control and a great blend of ride comfort with vivacious handling, although a SEAT Ibiza or Ford Fiesta both offer more fun behind the wheel for their drivers. That said, neither has an all-electric option, which Peugeot does with the E-208. This junks the petrol or diesel engine entirely for a 100kW (136hp) electric motor plus 50kWh lithium-ion battery pack, resulting in a maximum driving range of up to 224 miles per charge. It’s heavier than any other 208, which makes it not quite as enjoyable in the corners as the petrol and diesel models, and it can also have a firmer ride too (more notably if you spec it as a GT or GT Premium car on the biggest alloy wheels), but if you want a zero-emissions runaround then the E-208 has to be worth serious consideration. 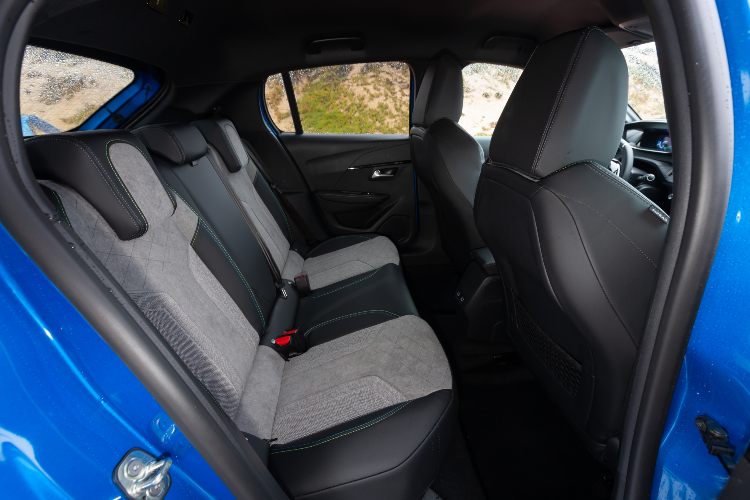 The Peugeot 208 has a good spread of interior storage options, while the 5-door body allows access to a passenger cabin that should seat 4 adults in reasonable comfort, even in the rear seats. All models have a 311-litre boot with all seats in use, rising to 1106 litres with the second row folded away. The former figure places the 208 as ‘above average’ in its class as it is, but perhaps more impressive is that the Peugeot was always designed for electrification – so the E-208 has exactly the same-sized boot space and passenger compartment as all its stablemates, rather than losing capacity due to the placement of the battery pack and so on. 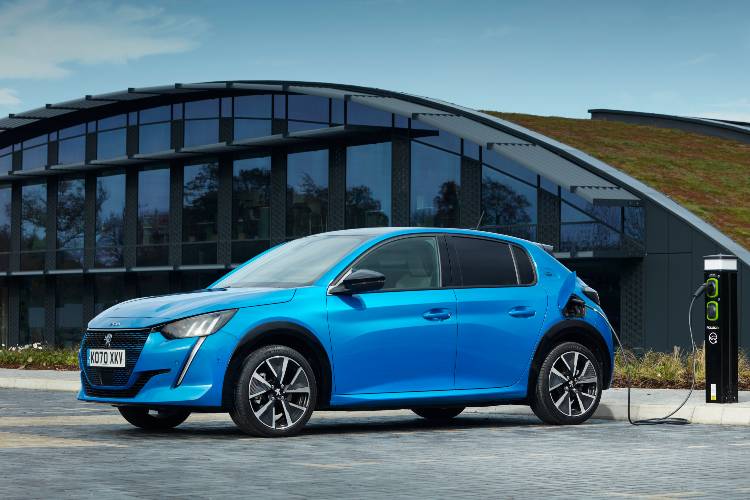 The cheapest to run will obviously be the E-208 electric model, which has zero carbon dioxide emissions and which has a range of up to 224 miles per charge. And it’s quick at such a thing, too – with the ability to be charged at up to 100kW DC, the Peugeot’s 50kWh battery pack can be replenished to 80% at its maximum charging rate. Even on a 7kW home wallbox, the car will be fully charged up in just 7-and-a-half hours, while plugged into the mains on a 3-pin plug it’ll take it 24 hours for a full juice-up.

In terms of spec, base Active Premium cars come with a 7-inch capacitive touchscreen interface with Android Auto and Apple CarPlay, a 3.5-inch instrument display for the iCockpit, 16-inch alloy wheels (in a different design for the E-208 model), manual air conditioning (automatic in the E-208), rear parking sensors, electric windows all round, and a strong suite of active safety assistance systems.

Allure Premium models get more gloss-black detailing on the body, a different design of 16-inch wheels (for petrol and diesel versions only), the full 3D-effect and larger iCockpit digital cluster display, automatic air conditioning (on all models at this level), a 180-degree reversing camera, privacy glass at the rear, an electric parking brake on all models, automatic wipers and full LED rear clusters with claw-effect lamps.

The top-grade GT Premium 208s have a dark design of 17-inch alloy wheels, keyless entry and go, adaptive cruise control with a stop-and-go function, and part-Alcantara and cloth upholstery for the seats. GT and GT Premium cars also have enhanced packages of advanced driver assist systems (ADAS) for improved safety. 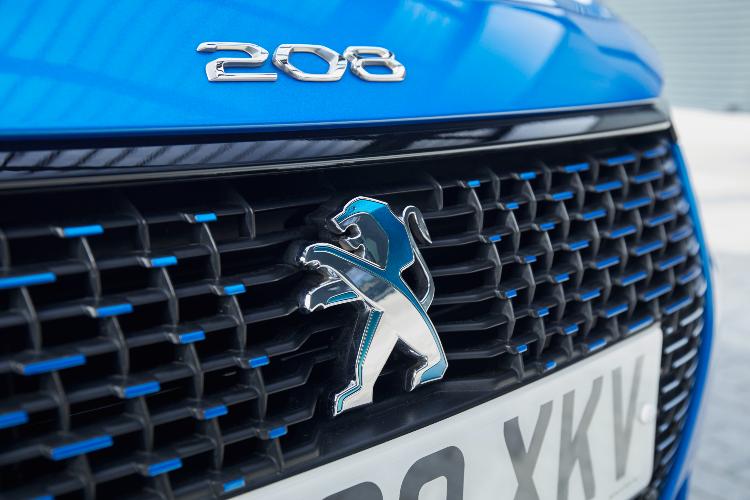 If you want an alternative to the E-208, the somewhat more pragmatic Zoe is your obvious choice.

Great chassis, strong VW Group engines and a youthful image, the Ibiza is a tough challenger.

This is the same car underneath as the 208, only with a Vauxhall ‘top hat’ placed on it.

"The Peugeot 208 is arguably one of the most stylish, desirable cars in its class..."

Peugeot 208 Colour Guide
Looking to lease a 208? See what colours and styles are available on this popular model...Read Guide
Ford Fiesta Review
Our car expert Mark Nichol puts the Ford Fiesta through the Vanarama road test...Read More
Your Guide To Everything Car
Everything you need to know about how to choose a brand-new car can be found in our comprehensive guidesRead More