The Tesla Model S is a stately-looking car capable of 0-60mph in around 3 seconds, but how does it handle the rigors of a proper road trip on a single charge? Vanarama's head of electric vehicle sales Will Hargreaves decided to find out.

One electric car – the Tesla Model S. One man – Will Hargreaves. How far will he be able to go before charging?

That's the key question that dominates the electric vehicle revolution – what kind of range will you get compared to a fuel-driven vehicle? Well, thanks to Tesla, it's further than you'd think. The playing field has been well and truly levelled.

A quick look at the Model S

The Model S is a driver's car. The cabin combines noise engineering with Tesla's quiet powertrain to obtain the sound dynamics of a recording studio.

The key feature of the interior is the 17-inch touchscreen, which includes both day and night modes for better visibility without distraction and puts rich content at your fingertips so you can easily find your destination, favourite song, next charging point, or even a new restaurant.

And that speed…with acceleration from 0-60mph in less than 3 seconds, it's like engaging the hyperdrive of the Millennium Falcon.

The trip: blow by blow

In one day, Will managed to go from London, up to Birmingham, on to Keele, and all the way to Newport and back to London – a journey of nearly 500 miles – with only two quick stops for charging. Here's how it all happened.

09:05 - Picked up the Tesla Model S and put the car in to charge. I'm raring to go, but it'll take enough time to charge that I can grab a quick coffee. 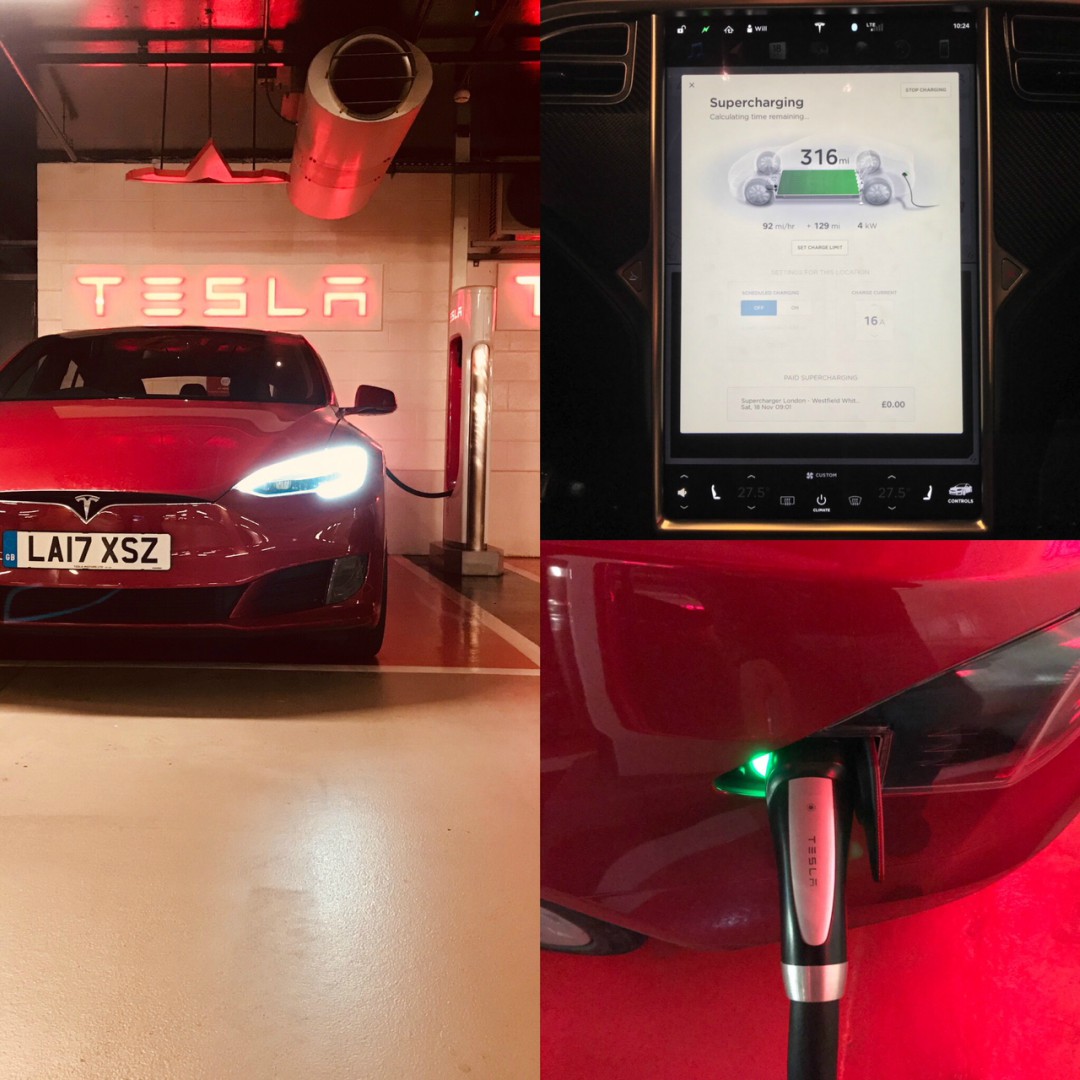 11:00-12:00 - Stuck in London traffic. Rats! Thankfully, the entertainment system in the Model S means I can whack on some tunes to pass the time. And, the seats are incredibly comfy, so I'm fine just sat here waiting.

12:00 – I'm finally underway, and heading towards Birmingham. The Model S is a pleasure to drive – effortless, in fact – and I'm really enjoying driving a car that turns so many heads. 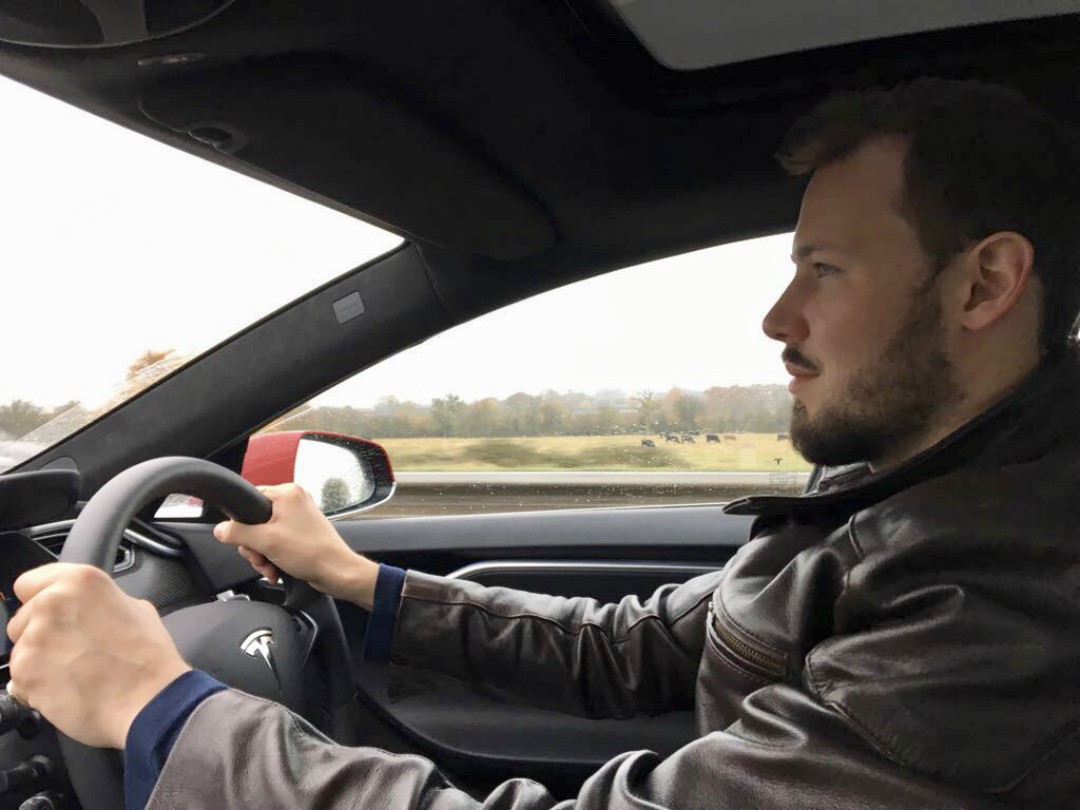 13:00 – I'm zooming around Birmingham nearly 130 miles away from my starting point. All systems go, and the Model S isn't even breaking a sweat…although I will be in a moment…

13:30 – Danger zone! Where to leave off? Should I recharge now or push on. The car is helpfully telling me that the next charge point is just 40 miles away with only 40% left! I had been planning to head up to Hadrian's Wall or the Lake District, but decide to re-evaluate that plan. 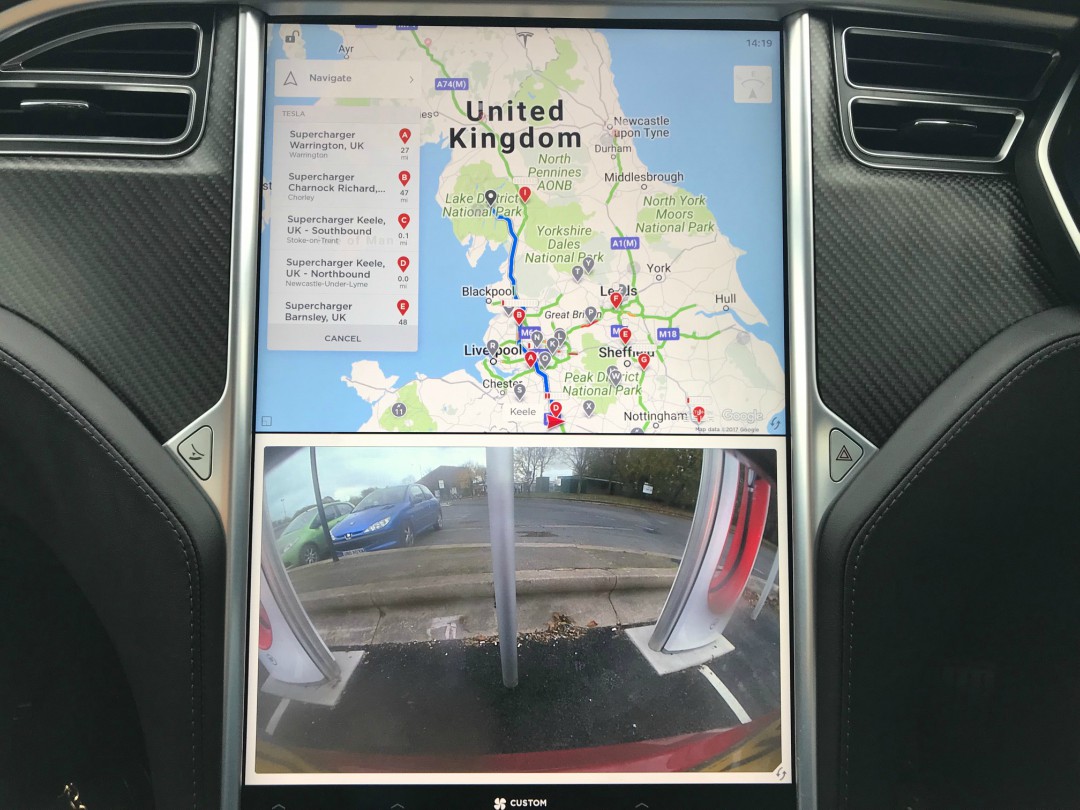 14:17 – I've pulled in to charge up my steed at Keele, just south of Manchester, and had it not been for the hours spent stuck in London traffic, I'm pretty sure we could've got further. Although, I've managed to get here with around 18% remaining battery and a range of 79 miles. Besides, I've already decided that the Peak District is far more worthwhile at this time of year.

15:20 – I'm back on the road and on my way to the Peak District. The car is holding up well, sadly my choice in music is not...I've somehow got myself stuck on a playlist of Christmas songs that features six remixes of Chris Rhea's "Driving home for Christmas".

16:11 – Pull over in Peak District (around 40 miles from Keele) to admire the view. Open door and step out feeling proud. 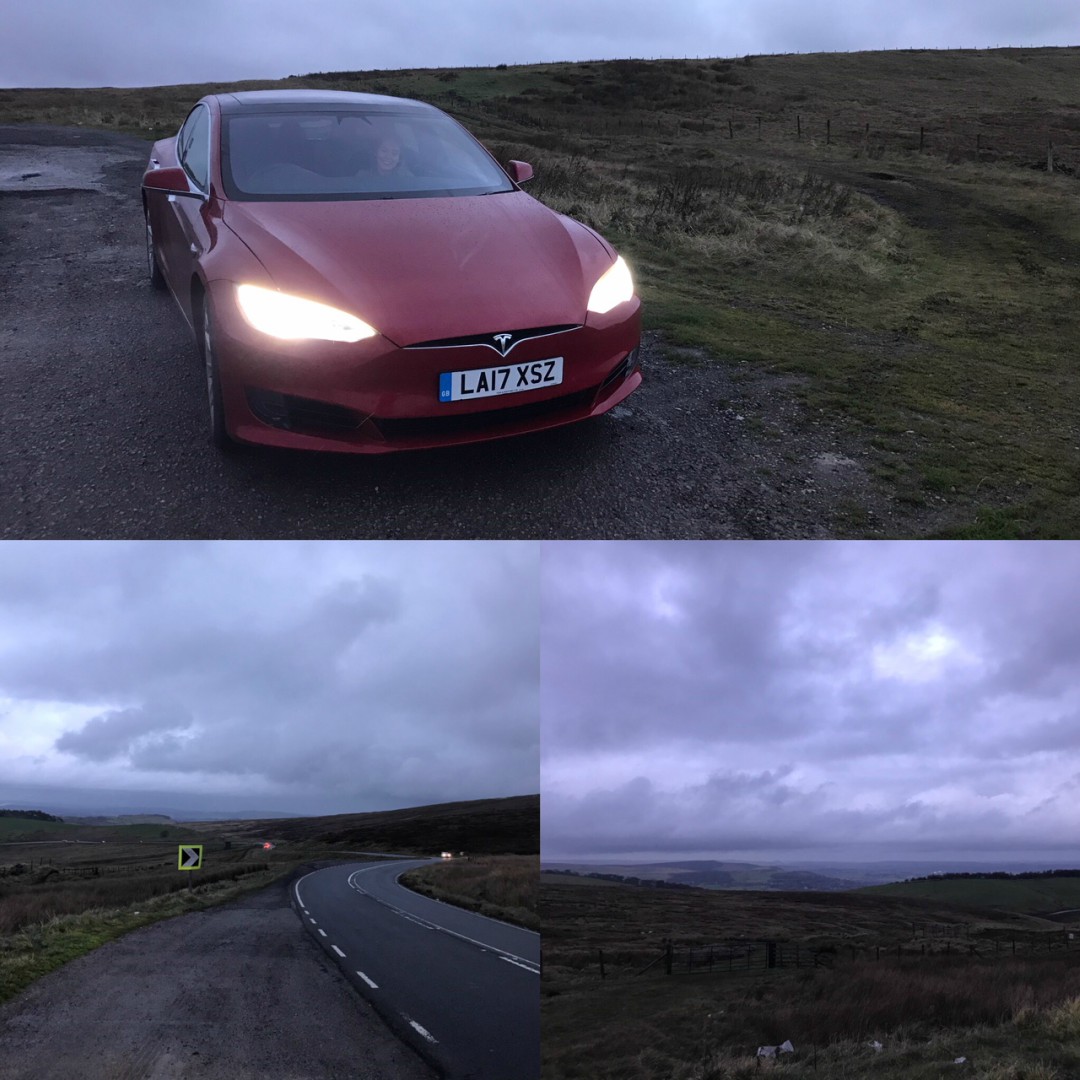 16:12 – Body temperature drops immediately, it's freezing and I get straight back into the car to admire the scenery from a warmer vantage point.

16:13-17:30 – I spend the next 90 minutes driving around the Peak District. I'm impressed by how nicely the car sits on the road like it's on rails. It turns beautifully and can easily cope with any corners it gets thrown around.

17:30 – Decide to stop for a break and stare into the distance like I'm on the cover of an album…all from the safety and warmth of the interior of the car.

17:40 – Having perfected my "thousand-mile stare", I'm back on the road heading south towards Newport – my chosen next destination is nearly 141 miles away. I stick on Led Zeppelin's "Immigrant Song" at full volume, and rock out.

19:57 – Blimey! I love this car, but it's in need of a top-up, and so am I. Reaching Newport I pop the car in to recharge. For me, it's a toss-up between several fast-food outlets, but eventually decide to refuel myself with a stop at KFC – you've got to love the Colonel's blend of 11 secret herbs and spices. 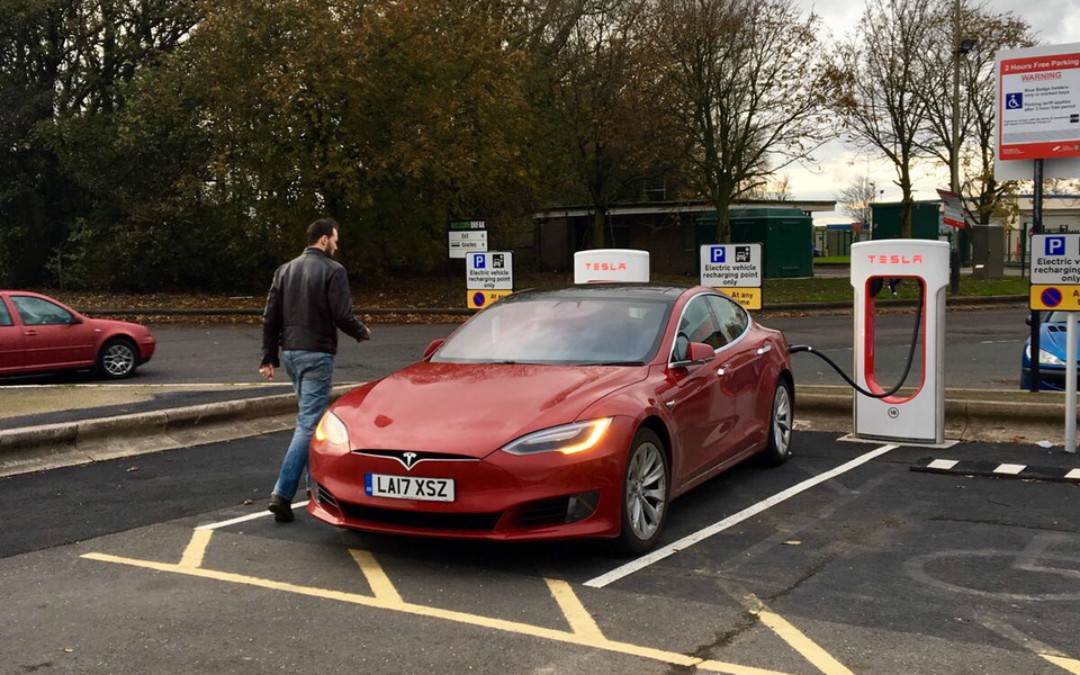 20:45 – Leaving Newport on full charge I knew this was the home stretch, and I was back in London in time for tea (and some medals, a beer and an epic adventure to tell my mates about in a bravado-laced monologue).

I can sum this whole experience up very succinctly: Tesla's Model S is a great car to drive, has the range to do long-distance journeys (I needed two charges in a 500-mile round trip, the same as a conventional fuel-driven vehicle), and is a real head-turner on the roads.

My final words on this trip and the car are equally simple. Electric vehicles are now a genuine proposition in the car sector. They've got the range, they've got the style, and they've got all the creature comforts you'd expect from a modern car. But what about that speed, eh?

If you'd like to find out more about the Tesla Model S, call 01442 835769. Alternatively, you can check out our leasing deals on the Model s

Related Articles
E10 Petrol: Your Questions About The New Fuel Answered
What are the pros and cons of the new E10 petrol? Here, we answer all the main questions.. Read More
Ford Freshens Up Focus With New Looks And Tech
Ford's enduringly popular Focus freshens up with more than a facelift....Read More
Fuel Crisis Could Push Motorists Into EVs Sooner
The UK fuel crisis could push people to make the switch to an electric vehicle sooner...Read More
We use cookies to improve your experience. Find out more in our cookie policy.