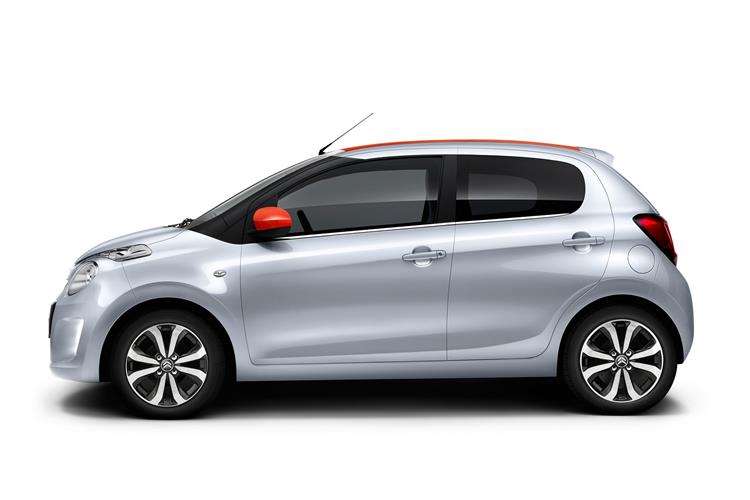 The Citroen C1 used to be a smart pick if you were after a cheap and cheerful city car. The latest version isn't content with being a budget option; it's tilting at the class lead. With better economy, a much better finish and a classier look and feel, it's in with a shot.

The Citroen C1 used to be an easy car to recommend. You'd point someone in its direction if they didn't particularly care for cars and just wanted a really cheap way to get mobile. It was acceptably reliable, not bad on safety and cost pennies to run. Okay, so its position as a state of the art city car was undermined years ago and the interior design still smacked more of turn of the millennium than anything else, but it had its niche. The latest C1 is a far more assertive use of 3.46 metres and looks to re-establish itself at the top of the citycar sectors, elbowing aside the likes of the Volkswagen Up, the Ford Ka and the Hyundai i10. Of course, in order to do that it also has to beat its siblings, the Toyota Aygo and Peugeot 108, which both roll out of the same Czech factory. That might be an even tougher task.

The C1 has an ace up its sleeve - when compared to the Aygo at least. Where the 'Japanese' car is powered by a 68bhp three-cylinder 1.0-litre petrol engine, your Citroen dealer will offer you the choice of a two petrol engines: a VTi 68, available with either a 5-speed manual or a 5-speed clutchless Efficient Tronic Gearbox (ETG), or in 'PureTech' 1.2-litre VTi 82 guise with a 5-speed manual transmission. The car has been designed to improve agility and manoeuvrability in town, with a turning circle of just 4.8 metres.

The C1 is offered in both three and five-door versions, unlike many of its citycar rivals. The styling is a good deal sharper than its rather effete predecessor and features a very unusual front lighting graphic. There's a vertical LED daytime running light above which there's a big round headlight pod with another lighting strip that forms an 'eyebrow' above it. Citroen has clearly worked at creating a visual continuity between the windscreen and the side windows, with a swooping waistline and blacked-out windscreen pillars. There's some decent shape in the flanks, while at the back, there's a trope carried over from the old C1, namely the all-glass tailgate section. This time, the hatch is bounded by two huge square lights. Eight colours are available from launch with Citroen also offering some contrasting body and roof colour options. The interior of the C1 is bright and airy with a colourful theme. Designed with clean, structured lines, the dashboard features bright colours on the multimedia panel, air vent trim and gear lever base. The door panels also include body-coloured inserts. There are storage compartments throughout the cabin with cup holders and a glove box able to hold a one-litre bottle. The 196-litre boot is 57 litres bigger than its predecessor and easy to access, with the parcel shelf folding away when the tailgate is opened. With the rear seats folded, boot capacity increases to a respectable 780-litres.

Prices start at just over £8,200 for a three-door entry-level C, but most customers will probably want to spend a little more to get a car with air conditioning. The C1 is offered with a three-model line up, starting with the rather basic C1 Touch. This gets anti-lock brakes with brake assist, electronic stability control, power steering, remote central locking, electric front windows, six airbags, an MP3 compatible audio system, a USB socket and LED daytime running lights. I'd certainly be tempted to budget another £1,250 and opt for the C1 Feel which adds air conditioning, a DAB digital radio, 7" Touch Drive interface with Mirror Screen technology and steering mounted controls, along with body coloured door mirrors and door handles. You can go a step further and choose the C1 Flair, which sports 15" 'Planet' alloy wheels and also gets a speed limiter, rev counter, reversing camera, electrically heated and adjustable door mirrors, a leather steering wheel and dark tinted rear windows. Available options include automatic air conditioning, automatic headlights, keyless entry & start and styling details such as black leather upholstery and White and Sunrise Red colour packs.

Citroen would have ticked the fail box quite comprehensively were this C1 not cleaner and more efficient than its predecessor. Keeping the weight down to just 840kg has helped, as has fitting ultra low rolling resistance tyres. Even the most powerful 82bhp engine will manage to squeeze 65 miles out of a gallon of 95RON, which is extremely good going when you pause to consider that the old C1's 68bhp 1.0-litre would record 65.7mpg. That 1.0-litre car would also emit 99g/km, a figure matched by the latest car's 82bhp powerplant. But where the 1.0-litre would get to 62mph in 12.3 seconds, this 1.2-litre model now takes just 11 seconds. So you're effectively getting a faster, more agile car that costs no more to run. I call that a major win. The little Citroen hasn't always enjoyed the strongest residual values, but that was often due to dealer discounting rather than any perceived weakness with the vehicle. This latest model might well follow that trend, so those looking for the biggest discounts might well sit and wait a little while for dealers to start pulling rabbits out of their hats.

The Citroen C1 is an interesting case. On the face of it, this model looks like the car that's going to lose out against the boldly-styled Toyota Aygo and the more punchy badge equity of the Peugeot 108. The Citroen, it would seem, is only going to make a persuasive case for itself if dealers can do some savage price undercutting. That's the received wisdom. The facts may well play out rather differently. I like what Citroen has done in offering more choice than citycar customers are accustomed to. There's three or five doors, two different engines, three trim levels, a choice of manual or automatic transmissions and beyond that the personalisation options. If you want your citycar just so, without having to compromise, the C1 is going to be the first place you go. Otherwise, things are much as it's always been. The C1 is going to continue to appeal to those who just want cheap wheels and it's still going to cost a pittance to run. The thing is, it's got more in its armoury than just low running costs now. Its rivals will need to keep a very watchful eye on how this plays out.