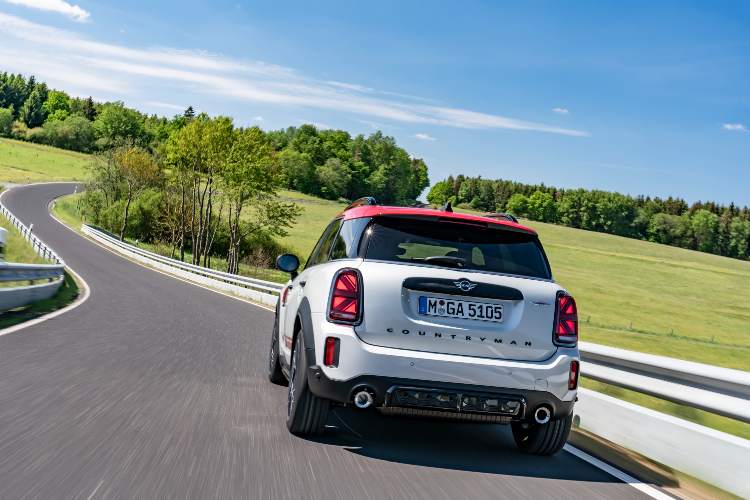 It’s a 300hp-plus MINI, is what it is. Roll that figure around in your head for a few moments, and you’ll realise it’s a huge amount of power for a vehicle that began life way, way back as a cheap, affordable runaround. Yep, what was once Issigonis’ 1959 brainchild of efficient packaging has turned into a high-performance machine for the 21st century.

This is the revised MINI John Cooper Works Countryman, or JCW Countryman in the preferred shorthand. There have been 3 generations of the all-caps MINI since BMW took it over and started making it in 2001, but only 2 derivations of the Countryman, which first arrived during the Mk2 MINI’s reign in 2010.

This 2nd-generation Countryman launched in 2017 and there was a hot JCW model pretty much from the off. With 231hp, it was probably quick enough for anyone’s liking, but for 2020 and beyond BMW took the ultimate MINI crossover-SUV to 306hp, 450Nm, all-wheel drive and a 0-62mph time of 5.1 seconds. That is seriously, seriously quick, and it is also the most-powerful MINI ever put into production. Although it holds that honour along with the JCW Clubman (that’s an estate model) and the rare-groove GP3 (which is a stripped-out hot hatchback), to be fair, but the GP3 is front-wheel drive only and therefore not quite as quick to 62mph as this family-friendly Countryman. But is the JCW any good? 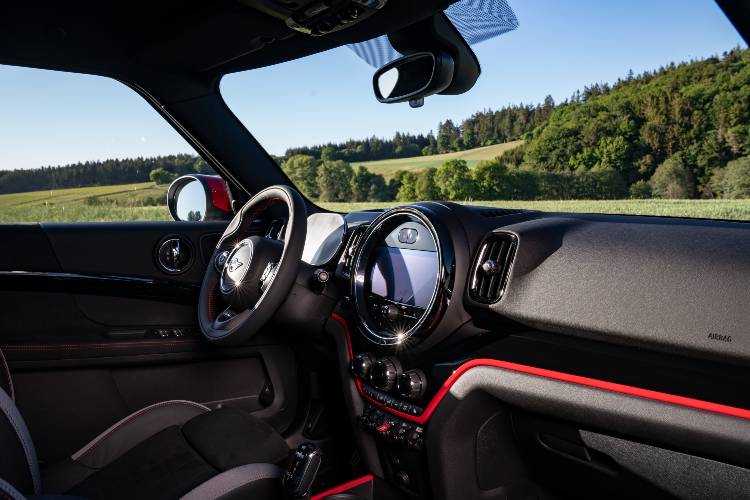 The Countryman is the MINI which best eradicates the modern-era cars’ poor packaging. Buy a 3-door MINI Hatch and you’ll be stunned at how little rear legroom there is, or how paltry an amount of boot space the company sees fit to give you. The Countryman eradicates such concerns with 5 doors, plenty of room for passengers in row 2 and a large cargo bay measuring 450 litres, although it will only add fuel to the fire for those folk who say condescendingly ‘the MINI isn’t exactly mini any longer, is it?’. At 4.3 metres long, 1.8 metres wide and more than 1.5 metres tall, this is no tiny city car; far from it.

The interior is supremely classy, though, in that way that MINI gets so right. Perhaps a few of the details are overdone to the point of being twee, but there’s an inherent quality to all the fixtures and fittings that speaks of premium manufacture, while the general ergonomics and the haptics of all the major switchgear are both spot on. With deep, sculpted bucket seats, a chunky leather-clad steering wheel and that large round central display – which mimics the original Mini – the JCW Countryman has a suitably high-end cabin. It even looks pretty decent on the outside these days too, which is not something that could always be said of the preceding version. 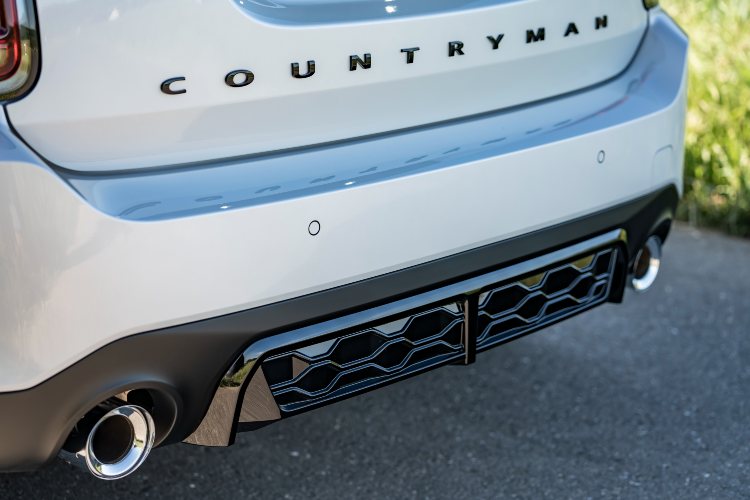 Prepare to have a deep intake of breath when we tell you what it will cost to lease and run a MINI JCW Countryman. We said in the intro that the original Mini was affordable transport, but this model is nothing of the kind. Its starting list price is a whopping £38,325, and that’s BEFORE you get busy with any of the company’s lengthy list of customisation options which are available. This means to lease, the JCW is going to be around £460pcm, when a decent Cooper S ALL4 model – which still has approaching 200hp, so should be fast enough for anyone’s reasonable needs – will be more like £340pcm.

And the JCW is also a thirsty car, that 2.0-litre engine returning a best WLTP combined economy figure of 37.2mpg and lowest CO2 output of 174g/km. Again, the Cooper S is considerably more frugal than that, but if you really need an eco-champ then there’s a plug-in hybrid version of the Countryman called the Cooper S E ALL4 which’ll do up to 156.9mpg, all while emitting as little as 40g/km of CO2. It also has a theoretical 31-mile all-electric driving range and while we fully accept plug-in hybrids rarely meet their combined economy/EV-driving range figures in reality, the Cooper S E ALL4 is nevertheless still going to be a lot cheaper to run than the JCW. Especially if you enjoy the 306hp MINI’s performance credentials on a regular basis… 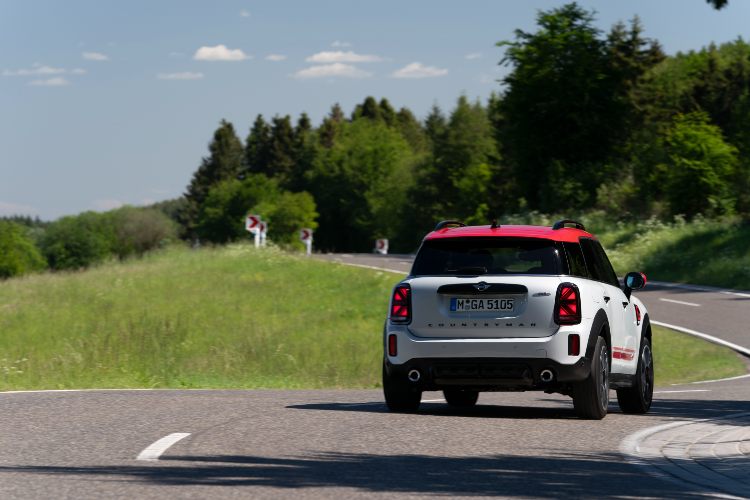 Many critics have said this 2.0-litre turbocharged 4-cylinder engine from BMW is not the most charismatic performance-car engine in the world. Which is probably a fair point, but then few turbo 4s sound great and what cannot be argued is how strong and muscular this unit is.

With 306hp, it’s right in the thick of things with similar crossover rivals from premium marques, like the 300hp Audi SQ2 or Volkswagen T-Roc R,, or even the belting 310hp Cupra Formentor 310 TSI. However, where the MINI trounces all of these is on its torque figure – with 450Nm, it has more flexibility than any of its rivals.

This, coupled to its ALL4 traction capabilities, makes it a seriously swift car… but not quite as fast as you might be expecting of something with 306hp. Blame the Countryman’s kerb weight for that, because it’s well the wrong side of 1.6 tonnes at the kerb in this specification. So while it can haul you out of corners rapidly in a tidy display of grip and clean power deployment, it won’t make you idly wonder if you’re in a supercar by mistake. It’s fast, but it’s not fast, if you get us.

It’s also not quite as joyful in the corners as some of the best MINI products of the past 20 years, again due to its bulk and its tall physical form. While body roll is well-controlled, it is also more prevalent than you’d find in the Hatch models – or even the similar Clubman – and so the JCW, for all its mighty drivetrain numbers, never feels as happy as you might expect being thrown around on a country lane.

Not that the handling is without merit, of course. The steering is nicely weighted and lacks much of the off-centre gloopiness that seems to affect much of parent company BMW’s sportier models these days, while the damping is pretty impressive. The ride is always on the firmer side of comfortable, but the MINI is never actively crashy over the bumps and it keeps all 4 of its wheels planted on the tarmac for the vast majority of the time; this makes it trustworthy on lumpier back roads, as it tracks a true course, instead of skittering here and there in a nervous fashion. Epic brakes, too, which are nicely modulated and always strong to bite.

Thankfully, with a superb 8-speed automatic gearbox and plenty of sound-deadening around the cabin, the MINI works as a family crossover-SUV, just as much as it does trying to impersonate a hot hatch on stilts. Around town, visibility out of the cabin is good and the car is docile to command in its gentler drive-mode settings, while the transmission is the very epitome of ‘seamless’.

So in many regards, the JCW Countryman is a thoroughly likeable thing – it’s just that it never quite sets off any dynamic fireworks that you might be expecting from a 300hp-plus, 155mph MINI. Quietly capable, rather than thrillingly sensational, perhaps. And, suspiciously, a more muted driving experience than the mechanically similar BMW M135i xDrive or the BMW X2 M35i. Almost as if it has deliberately been kept restricted, in order not to step on BMW’s toes… 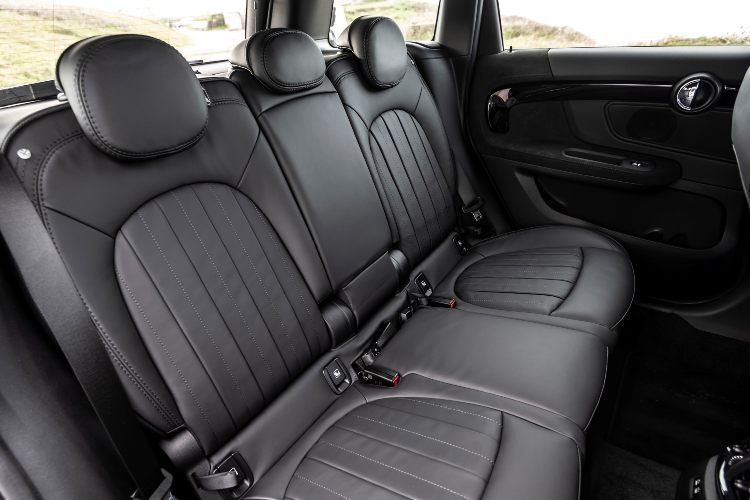 This is the most practical MINI of the lot, because it’s the biggest. Rear leg- and headroom is generous, rather than bijou as it is in the Hatch, and a 450-litre boot is a very capacious area to start with – only it rises to a sizeable 1390 litres with the rear seats folded down. Throw in a couple of cupholders in front of the gear lever and door pockets which have been scooped out to hold larger bottles of drink, plus useful storage cubbies dotted about the cabin, and the Countryman is a helpful machine for families. 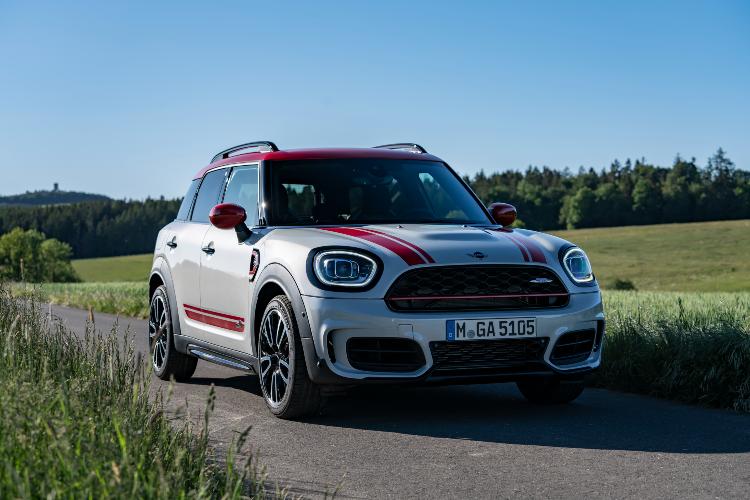 As stated above, the JCW is expensive to lease and expensive to run. However, what you’re paying for is its prestige status, its top-end performance and that certain ‘MINI-ness’ that buyers seem to love. Also, while the JCW is expensive fare compared to its Countryman stablemates, when held up to similar 300hp-ish crossover rivals from other premium manufacturers, its asking price and running costs are broadly identical to the competition. Factor in the MINI’s strong residual values and the JCW almost – and we do mean ‘almost’ – starts to make financial sense. 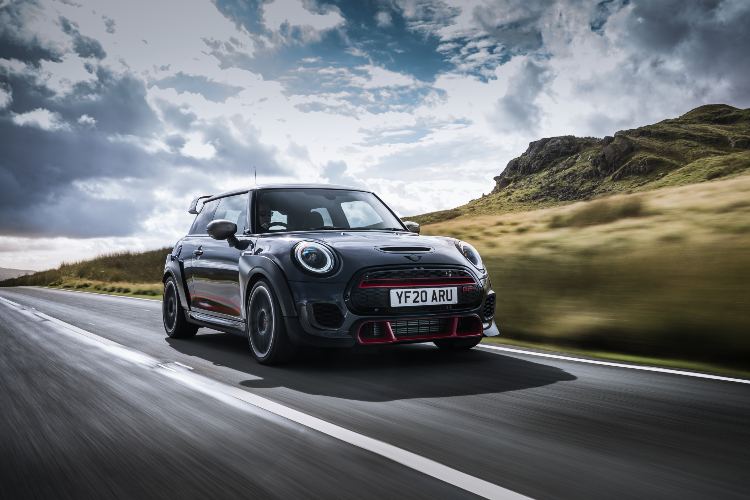 Although the Countryman and Clubman models of JCW are faster to 62mph because of their 4-wheel-drive status, the ultimate Mk3 MINI remains the GP. Limited to 3000 units, the GP3 – as it will be known henceforth, as there were GP versions of both the Mk1 and Mk2 MINIs – has no rear seats, drive going only to its front axle and a limited-slip differential. It also has wild bodywork made of bits of carbon fibre and a 164mph top speed, which is a brain-frazzling figure when mentioned in connection with a MINI. Guaranteed to be a future classic and something which’ll appreciate in value, the GP3 is an exhilarating and somewhat wild ride, which means it’s best sampled in very small doses. It’s nowhere near as daily-usable as this JCW Countryman, for instance.

Probably our favourite fast crossover-SUV this side of a Porsche Macan. Brilliant to drive and look at.

Strong engine and quality cabin, as you’d expect, but chassis is so-so.

Three Things To Remember About The MINI JCW Countryman:

More On Cars
Fiat 500 Electric Colour Guide - Which Should You Choose?
Here’s a detailed look at the paint palette available on the Fiat 500 4-seater city electric vehicle (EV), which we hope will help you choose your perfect new car colour. Read Guide
Fiat 500 Review
The Fiat 500 feels like it's been around forever, but does it still deliver? Mark Nichol finds out.Read Review
Fiat 500 Vs Vauxhall Corsa
Looking for a small car but can't choose between the Fiat 500 and Vauxhall Corsa? We put the two head-to-head...Read More