Why Lease the Land Rover Discovery? 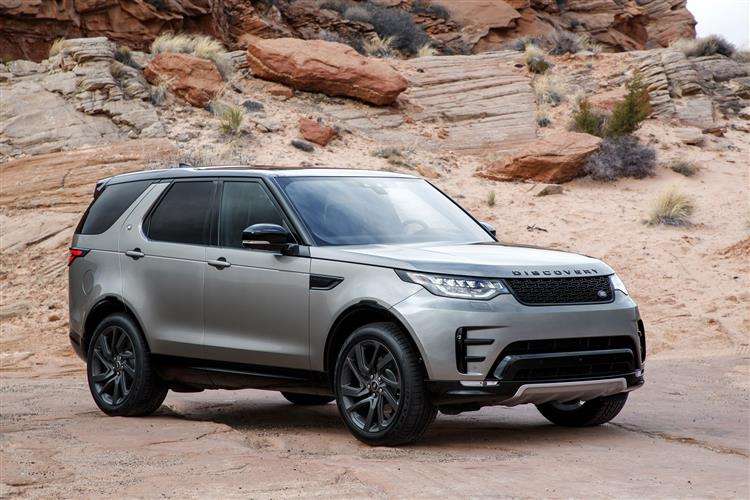 There's nothing quite like a Land Rover Discovery and this fifth generation version continues to offer the toughest, the most practical and the most capable choice in the large SUV sector. It's lighter, larger inside, cheaper to run and more media-savvy than its predecessor. Yet it remains a practical choice for up to seven adults and is an easy class-leader off the beaten track. In the large family SUV segment, there's nothing quite like it.

Without the Discovery model line, it's doubtful whether the Land Rover brand would even exist today. Launched back in 1989, the original version merely bolted more spacious bodywork onto an aging Range Rover chassis, but the sales it generated were enough to save the company. They also financed a more sophisticated five cylinder air suspended model in 1998 at the same time as the company's engineers were busily beavering away at something much better, third generation Discovery3 of 2004 which was ultimately developed into the Discovery4 of 2009. That bit of history illustrates that it's been quite a long time since we've had a fundamentally new design in this model line-up, but we have that now in the form of this fifth generation version. It's a big stylistic departure from its predecessor and it uses a range of far more efficient Ingenium diesel engines. Potentially then, lots to look forward to.

There's still something very special about a place behind the wheel of a Discovery. In contrast to more car-like rivals, it's not a cockpit-like experience with all the controls angled towards you as they would be in, say a Range Rover Sport. No, this is different - a place of command: a place to do business with the elements, be they the snake-infested swamps of the rainy season in the Serengeti or the snarled-up traffic of a wet windy morning on the school run. This fifth generation version is powered by Jaguar Land Rover's efficient range of four and six cylinder petrol and diesel engines, all paired with a smooth and responsive ZF eight-speed automatic gearbox. Most buyers will want the entry-level twin-turbo Sd4 Ingenium four-cylinder diesel, a unit that produces 240hp with an impressive 500Nm of torque. There's also a 300hp four cylinder Ingenium petrol engine. Six-cylinder diesel power comes from the 306hp Sd6, which delivers 600Nm of torque for strong performance, pulling power and efficiency. All variants get impressive towing capability, the diesel variants offering a class-leading 3,500kg braking towing total. Plus Land Rover has developed clever technology to make this towing ability more accessible. Advanced Tow Assist is an ingenious development which allows drivers to complete potentially difficult reversing manoeuvres when towing trailers, caravans and horseboxes with ease. As before, there's class-leading off road ability thanks to permanent 4WD and the standard 'Terrain Response' system.

Think it looks like a larger version of the existing Discovery Sport? We do too. Land Rover insists though that historic Discovery design cues remain in this MK5 model, things like the stepped profile that optimises headroom for passengers travelling in the third row of seats. It also accommodates Discovery's customary stadium seating configuration, which sees each row of seats positioned higher than the one in front, ensuring every seat is the best seat in the house. Unlike some of this car's 7-seat SUV rivals, the third row chairs are designed for adults as well as kids. Auto Access Height technology reduces the ride-height by up to 40mm as passengers prepare to enter or exit the vehicle. Up front, there's the usual Jaguar Land Rover 'InControl Touch Pro' infotainment system, here in 10-inch form on the centre console, enabling Land Rover's designers to reduce the number of switches on the centre console by a third, delivering a clean and uncluttered appearance. Another technology feature for active families is Land Rover's state-of-the-art Activity Key wristband, which allows customers to enjoy sports and active hobbies without carrying the standard key fob. As for luggage space, well there's lots of it - up to 1,137-litres with the first two seating rows in place - or up to 2,406-litres with just the front seats in use.

Prices start at around £48,000; that's for the base 240hp Sd4 diesel variant. Obviously, you'll pay more if you want either the 306hp Sd6 diesel (which starts from around £57,000). Trim levels run from 'S', 'SE' and 'HSE' to 'HSE Luxury' and on to top 'Landmark' trim. A key standard equipment feature across the range is the InControl Touch Pro infotainment system with its slick 10-inch centre console touchscreen. Crisp graphics and easy-to-navigate menus incorporate the latest navigation and entertainment technologies including door-to-door navigation, which can share directions to a paired smartphone to help customers complete journeys on foot. Seamless iOS and Android connectivity combine with a 14-speaker Meridian digital surround system, with an additional subwoofer, and 3G WiFi to provide a superb listening experience, whether streaming songs online or playing music directly from a connected device. Up to four 12V charging points ensure this Discovery is well equipped to cope with the demands of the most connected families, while as many as nine USB sockets allow passengers in each row to power their smartphones or tablets simultaneously.

There are a number of German-brand large SUV rivals that are more efficient than this Discovery. But then none of these cars are as large and practical and none is anything like as good off road. Find yourself a large SUV that can get close to matching this Discovery in these respects - say a long wheelbase Mitsubishi Shogun or Toyota Land Cruiser - and you'll find that it's slower, less well built and costlier to run. In other words, though in comparison to some rivals, there's still a premium to pay for this car's ultimate versatility and capability, it's a smaller one these days. And with the recent efficiency improvements made, it's now pretty justifiable. Helping in that regard is the fact that this MK5 model is lighter than its predecessor. Land Rover's proven lightweight and durable aluminium monocoque architecture contributes to a 480kg weight saving compared to steel ladder construction. As a result, the twin-turbo 240hp Sd4 Ingenium four-cylinder diesel engine, for example, manages combined cycle fuel economy of up to 33.6mpg and CO2 emissions of 197g/km. For the Si4 petrol variant, the figures are 25.8mpg and 222g/km, while for the Sd6 diesel, it's 31.5mpg and 202g/km. Helping in all cases is a stop start system that cuts the engine when you don't need it, say stuck in traffic or waiting at the lights.

The world takes on a different appearance from behind the wheel of a Land Rover Discovery. At the helm, you know you're in a car that can take on just about anything, be that a seven-up trip to the Alps or a relaxing ride home on a wet and slippery winter's night. But it's only when you put it through its paces in properly extreme terrain that the genius in its design becomes fully apparent. How can a car capable of such extremes on the rough stuff be so utterly easy to use on the school run? Only Land Rover knows. The more sophisticated design and clever in-car connectivity improvements of this fifth generation version are welcome but ultimately, the recipe is as before. There's a clever, classless feel about this car that nothing else can quite replicate. Other rival SUVs claim to be tough but at the wheel, you're always a little hesitant to see them prove that. A Discovery's different, a uniquely capable SUV and a British success story that we should be proud of.