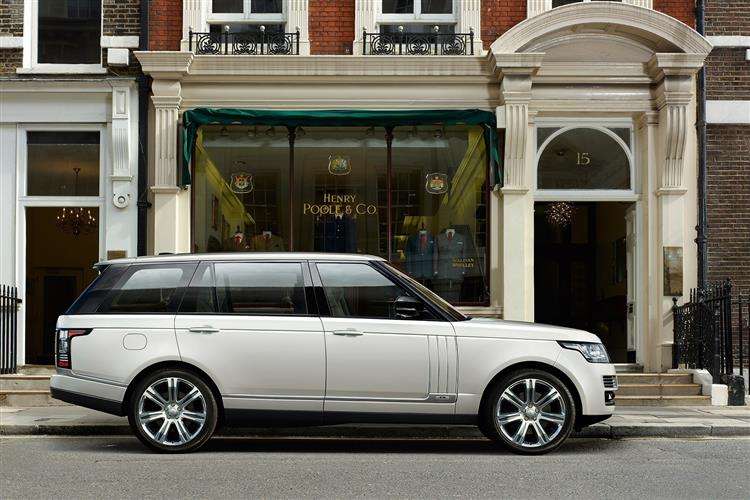 The Range Rover is at its biggest in long wheelbase guise - the ultimate Land Rover product. Jonathan Crouch reports on the improved model.

In long wheelbase form, the Range Rover grows by 200mm in length, with the extra going to benefit rear seat legroom, taking it to limousine standards. Which means that if you habitually sit behind a chauffeur, you can now include the world's most capable luxury 4x4 on your shopping list when the time comes to change your luxury conveyance. Let's check out this package in its recently upgraded form.

It's hard to imagine how any other luxury SUV would work in long wheelbase form but it's a mark of the unique class of the Range Rover that the idea of getting it in stretched form raises not even an eyebrow. When we first drove the standard car, we suspected that Land Rover were going for the top Bentley and Mercedes market as well as that for super-luxury SUVs: here's the proof. Apart from the increase in length to 5,199mm, the rest of the recipe is of course standard Range Rover. Which means that it's all very desirable indeed. The relatively light bodyweight means it can be larger, faster and more responsive than any previous version of this model at the same time as being more efficient and better equipped. It can also claim a lighter eco-footprint and performance approaching that of a super-saloon. And yes, it'll be even better if you're setting off across the Serengeti or exploring the Amazon. It'll be, more than ever, one of a kind.

Does it feel just like a standard Range Rover to drive? Of course it does. The big news with this revised model though, lies with an option you can specify beneath the bonnet. Did we ever imagine we'd see a Range Rover with a four cylinder engine? Probably not but the sophisticated aluminium underpinnings of this fourth generation design have made that possible. The four cylinder powerplant in question is the 2.0-litre petrol/electric hybrid unit that headlines this model's most recent improvements, but we'll get to that shortly because most customers are going to want something more conventional beneath the bonnet. The most popular unit for long wheelbase model buyers is the 4.4-litre SDV8 diesel which offers 339bhp and 700Nm of torque, enough to dispatch the sixty sprint in 6.5s on the way to a top speed of 135mph. For the few who'd consider a conventional petrol-powered Range Rover, there's a 5.0-litre supercharged V8, available either with 525bhp - or 565bhp in top 'SVAutobiography Dynamic' guise. As for that Plug-in hybrid, well it's badged 'P400e PHEV' and develops 404bhp; enough grunt to get you to 60mph in 6.4s en route to 137mph. Off road, things are much as before; supremely capable in other words. There's a full time 'intelligent 4WD system' with a two-speed transfer 'box (that you can shift down into on the move at up to 37mph), plus the option of Land Rover's very clever All-Terrain Progress Control system. Here, the driver can input a desired speed without any pedal inputs. The ATPC set-up will then maintain that, reducing the driver's workload and keeping the car's composure over steep gradients, rough terrain and low-grip surfaces.

The extra 200mm of length of this long wheelbase model inevitably adds a bit of weight to trhe aluminium bodyshell but this is still an efficient piece of design. Longer rear doors solve the old car's issue of awkward access to the rear seats. LWB buyers get a choice of either a standard rear seat or optional individual chairs, either of which can be reclined up to 17 degrees, an increase from the eight degrees of the standard wheelbase model. There's all sorts of luxuries that can be added too, from large TV screens to a front passenger seat that slides all the way forward into the footwell. There are no exterior changes to this updated model but it remains an elegant thing, the classy panelwork draped around a lightweight all-aluminium monocoque body structure. Inside though, quite a lot has changed. The cabin now features wider, softer seats that at the back, free up an additional 186mm of legroom. Rear seat folk can also specify a massaging system and can make use of up to 17 media connection points. Up front, the key interior change with his revised model lies with the addition of the brand's latest Touch Pro Duo infotainment system which features a pair of high-definition 10-inch touchscreens that form the centrepiece of the minimalist cabin. Otherwise, things are much as before. As ever, we particularly like the way that the car's air suspension system automatically drops to its lowest 'Access Height' when parked to make entry and exit easier.This car's substantial size isn't enough to permit the fitment of the couple of occasional rear boot-mounted seats you'll find in a Land Rover Discovery or (optionally) in a Range Rover Sport. Still, buyers of this top Range Rover model have never seemed to want them. Luggage room has always been a greater priority, so I should point out that there's 505-litres of it - which may be a little less than you were expecting. Perhaps that has something to do with the greater priority that Land Rover's designers have given to space for rear seat passengers.

The LWB model comes only in top 'Autobiography' or 'SVAutobiography' trim and only with the line-up's most powerful engines. Buyers will need to find a premium of around £8,000 over equivalent 'Autobiography' versions of the short wheelbase version. That means a starting price of around £113,000 for the SDV8 or the P400e Plug-in hybrid - and around £117,000 for the 525bhp V8 Supercharged variant. The top 565bhp V8 'SVAutobiography' flagship model is an eye-watering £177,000. As you'd expect, you get a lot for that in terms of equipment. Items added us part of this range revamp include a gesture-controlled sunblind; a cabin air ionisation system; Pixel-laser LED headlights that never have to be dipped at night; and an 'Activity key' allowing you to securely lock and unlock the doors without the need to carry a conventional key fob. Other clever driving features include Adaptive Cruise Control, plus Land Rover's 'Queue Assist and Intelligent Emergency Braking' set-up. Advanced Tow Assist takes the anxiety out of reversing when towing a trailer. And Low Traction Launch is a manually selectable driving mode that helps you gain traction when pulling away on slippery surfaces.

Celebrity Range Rover owners like the British Royal family, Bruce Springsteen, Jack Nicholson, Keira Knightly and Madonna may not worry too much about running costs but an increasing number of Range Rover owners do. After all, it's a little hard to tell your employees to turn off their screen savers at night if you're driving a hulking great luxury SUV that can't even average 30mpg on a good day. EEC directives will also be punitive to Land Rover's business if the company doesn't make its cars a little more planet-friendly. Hence the huge investment in lightweight aluminium technology that has brought us the fourth generation version of this car. The extra efficiency of this car isn't only down to aluminium mind you. There's the slippery 0.34Cd drag co-efficient, the lightweight Brembo front brake callipers, the active front grille shutter, the aerodynamic underfloor panelling, the electric power steering and the Start/Stop system that cuts the engine when you don't need it, stuck in traffic or waiting at the lights. The LWB body doesn't affect running cost returns. Which means that the SDV8 diesel manages 32.5mpg on the combined cycle and 229g/km of CO2. The supercharged petrol model is of course a different proposition altogether in this respect, recording 322g/km and a combined cycle fuel return of just 20.5mpg.

If you're a captain of industry, then you might very well welcome a change from your usual Bentley, Rolls Royce or Mercedes S-Class limousine. In which case, the LWB Range Rover could very well be your perfect car. Celebrities like Jamie Oliver are already chauffeured around in standard length models, so this lengthened version probably already has a ready market. Best of all, the extra 200mm of length has no impact at all on this model's unique go-anywhere attributes. Which means that if your lifestyle fits and you can afford one, you're going to find this car very hard to resist.