Why Lease the Hyundai I20? 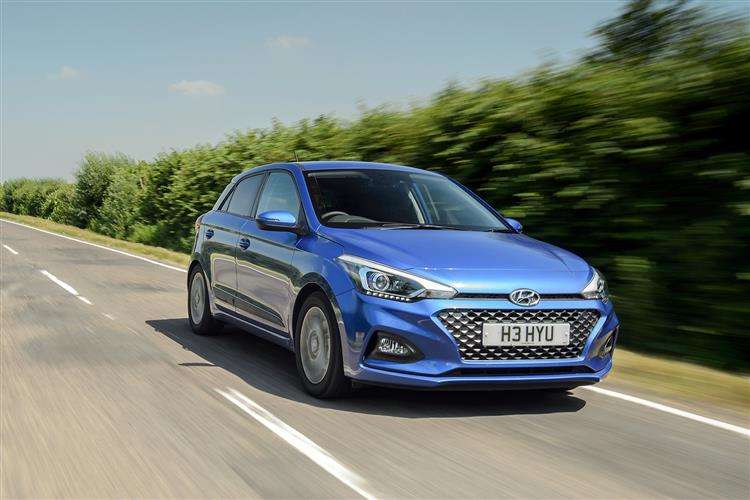 Supermini buyers who might have overlooked Hyundai's i20 are being targeted by this revised second generation model. It gets smarter looks, a 7-speed dual clutch auto gearbox option, upgraded safety and extra media connectivity. Plus it remains one of the more affordable class players.

We're used to hearing success stories from Hyundai, but in recent years, there's one important market segment this Korean company has found something of a struggle: that for superminis. The company's i20 model, first introduced in 2008, has always aimed to rectify that oversight, but the MK1 version had limited success in this regard. This second generation design has done better but in recent times had slipped a little on the technological front in comparison to the best of its class rivals. Hence the need for this revised version. It's still made at a state-of-the-art plant in Turkey and has been developed following a German-based product development programme and a demanding testing schedule on roads right across the Euro zone. This one, in other words, really is designed precisely for us.

The only really significant news on the engineering front with this improved i20 is the addition of a 7-speed dual-clutch automatic gearbox option for the 100PS version of the three cylinder 1.0-litre T-GDI turbo petrol engine that most i20 buyers aspire to. This unit is also available in an uprated 120PS guise. Those customers who can't stretch to it are served with the brand's much older 1.2-litre petrol powerplant, available with either 75PS or 84PS. The i20 has always made great play of being designed by Europeans, in Europe for European conditions, so it's no surprise that we've always liked the way the car drives. The steering system is a brushless a/c electric motor-driven steering system that requires 2.7 turns lock-to-lock for a tiny 5.1-metre turning radius - making the car easy to navigate in town. Excellent forward visibility is enabled by the slim front A-pillars. It also helps in an urban environment that the steering is light and direct, the wheel-at-each-corner design makes each extremity of the car easy to position and it's simplicity itself to park. Just as a supermini should be.

Of all the cars in its line-up, the i20 has traditionally been Hyundai's most conservatively-styled thing, but the looks of this improved MK2 model are slightly more eye-catching. The front of the five-door variant now features redesigned front bumpers including the 'Cascading Grille' recently seen on the brand's other cars. The rear of the i20 five-door also has updated bumpers and rear combination lamps and the tailgate has been reworked to integrate the license plate. There are smarter 15"- and 16"-alloy wheel designs too. As before, there's also a 3 Door bodystyle option. The interior remains quite smart, with the design maturity of a much bigger car. Previously, a major omission on lower-order variants was the kind of centre-dash infotainment screen that buyers expect from virtually every modern car these days. To put that right, the 7-inch monitor that was previously limited to the priciest derivatives is now fitted across the range and features 'Apple CarPlay' / 'Android Auto' smart-phone mirroring. At the top of the range, this monitor supports a built-in navigation system. As for practicality, well the back seat remains quite spacious by supermini standards and there's a decently sized 326-litre boot. The rear bench folds flat, meaning capacity is boosted to 1042-litres with the rear seats folded.

As before, prices sit in the £14,000 to £19,000 bracket and there's the choice of either a five-door hatchback or a three-door hatch variant. Spec changes with this revised model include the addition of a centre-dash 7-inch infotainment screen on lower-order models. As before, the infotainment system has USB and auxiliary connectivity fitted as standard and can be specified with an integrated My Music function, along with Bluetooth hands free, where up to 1GB of music can be stored and played. Plus you can specify 'big car' features like a panoramic sunroof, automatic folding door mirrors, a heated steering wheel and a special automatic windscreen defog system. A key new option available across the range is a Phantom Black two-tone roof. There's also now a lot more camera-driven safety kit on offer, including the latest Hyundai SmartSense active safety and drivers assistance systems. These include Lane Departure Warning System (LDWS), Lane Keeping Assist System (LKAS), Autonomous Emergency Braking (AEB) city and interurban, Driver Attention Alert (DAA) and High Beam Assist (HBA).

Hyundai has gone to some length to improve the efficiency of the latest i20, as a part of making sure that all engines now meet the now more stringent Euro 6d emission regulations. The company's Idle Stop and Go engine stop/start system is now a standard feature across the range. And the popular 1.0 T-GDI turbo three cylinder petrol engine is now equipped with a built-in particulate filter to enhance environmental performance. This i20's relatively low weight also helps, achieved through the use of lightweight, high-strength steel. As does efficient electrically-assisted steering and the slippery 0.30Cd drag co-efficient. The five year unlimited-mile warranty is still a huge drawcard car this car. Imagine you bought a Hyundai i20 and your neighbour bought a Fiesta and you both sell your cars after three years. Anyone buying the Ford would be on their own, whereas the Hyundai buyer would be able to transfer the residual two years of the warranty. That's a huge drawcard. As well as the warranty, Hyundai also offers annual health checks on the i20 for five years - and five years worth of roadside assistance. There's an additional ten year anti-perforation warranty for the bodywork. You can also choose a three or five year fixed price servicing plan if you really want to take the nasty surprises out of ownership.

One statistic tells you a lot about this i20: 88% of existing owners buy another, a figure almost double that of typical rivals in this segment. Evidently then, people like it once they've tried it. You can see why. Certainly it's hard to think of a supermini that would be easier to live with than this one. Few others are more practical or better built and though pricing's crept up a little, this car remains affordable to buy. To these sensible virtues, this improved second generation model adds smarter shape and a bit of extra technology. Of course, it isn't perfect. Not all the mainstream engines are as efficient as they could be, a point emphasised by some trendier, more avant garde rivals, some of which are better to drive. Overall though, if you can find a car in this class that makes more sense when you add together all the really important attributes that families look for in a supermini in this segment, then you'll be doing very well. These are, after all, times that, more than ever, call for sensible decisions. Like purchase of an i20? If you're target market for this car, you might well think so.