Why Lease the Aston Martin Db11? 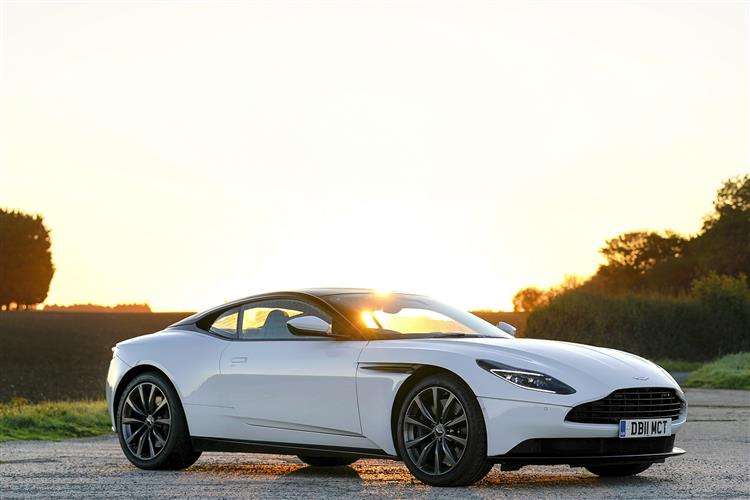 The DB11 is the backbone around which the rest of the Aston Martin range is being built. Jonathan Crouch drives it.

The DB11 is the Aston Martin of choice for those craving something sleek and graceful rather than overtly aggressive. This, arguably the classiest car in the Aston range, is primarily a consummate sporting luxury GT, but can play the sportscar when required thanks to clever adjustable damping. It's very desirable indeed.

This DB11 promises much in terms of driving dynamics, though Aston Martin still doesn't position it as the kind of out-and-out sportscar its slightly more affordable Vantage model can be. But that's perhaps appropriate. Right from the moment that British businessman David Brown first bought this brand back in 1947 (hence the DB model naming), there was also a need to produce powerful Grand Touring GTs and we've seen plenty of those over the last seventy years. The DB11 answers that call better than any model before it, whether you choose the coupe body style or the gorgeous Volante convertible. Both will be as comfortable on a trans-continental highway as on a twisty Alpine pass. And both claim to be everything a super-luxury GT sportscar ought to be. That's the promise. What's the reality? Let's find out.

In its top AMR V12 form, the DB11 gets an Aston Martin-designed 5.2-litre V12 developing 630hp. There's definitely something about the gloriously fearsome bark of the twin-turbocharged engine when it barks into life - or at least there is if you start it in 'full woofle' mode; there's also a 'quiet start' option, should you want to make a soft getaway. That noise is instrumental in preparing you for a unique experience as you nose out into the traffic. A thoroughbred sportscar deserves a thoroughbred engine and this is exactly that, with an exhilarating roar under hard acceleration, yet with a growl that becomes muted and melodic when cruising. The alternative powerplant is a 4.0-litre V8 borrowed from Mercedes-AMG (the same as that used in the Mercedes-AMG GT) putting out 503hp. With both engines, 62mph from rest takes about 4 seconds, but the top speed of the V12 is a little higher than that of the V8 (200mph as opposed to 187mph). In both cases, drive is dealt with via a super-smooth paddleshift eight-speed ZF automatic gearbox mounted at the rear and driving the rear wheels. And there's a drive mode control system that independently controls the powertrain and the chassis via 'GT', 'Sport' and 'Sport Plus' options, all of which are quite viable for road use.

Aston Martin tells us that it aspires to make the most beautiful cars in the world. Is this one of them? There are many who would say so. Prior to the DB11, modern era Astons, though sleek and elegant, had all tended to look rather similar. Here too, you get the usual long bonnet, sweeping roof line and short rear overhangs, but this time round, stylist Marek Reichman and his team wanted to build on these established design cues to create a car with a bit more of its own identity. Yet one still respectful of a historic DB line design legacy that's given us icons like the DB2, the DB4, the DB5 and, more recently, the DB10 developed specifically for the James Bond film 'Spectre', a model that provided the aesthetic inspiration for this car. We tested the coupe body style. The alternative Volante convertible features a special eight-layer fabric hood. It takes just 14 seconds to lower and 16 seconds to close and can be operated at speeds of up to 31mph. Whichever version you prefer, distinctive touches are plentiful, starting with this sharply-sculpted clamshell bonnet that features twin cooling vents. Equal effort has been expended in the interior, which is trimmed in gorgeous leather and features classy trimming that is exactly what it looks like. It is a bit disappointing that the single column stalk off the steering wheel is very obviously borrowed from a Mercedes, as is the centre-dash infotainment screen. Through the wheel, you view a fully digital instrument panel and there's a proper start button with keyless go, rather than the previous Aston system that required you to clunkily put an 'emotional control unit' key into the dash. There are a pair of small child-sized rear seats. And a 270-litre boot.

The DB11 range is pretty straightforward, kicking off with the V8-powered Coupe model which costs just under £150,000. If you can stretch to about £160,000, you can get yourself the Volante convertible version, which uses the same engine. Some potential buyers though, may be of the opinion that an Aston Martin really needs a V12, so for these people, that engine configuration lives on here with a rare and extremely focused 'DB11 AMR' model only offered with the coupe body style and costing around £175,000. As for the competition, well bear in mind that this is a Grand Touring GT sportscar, not a focused, more track-orientated junior supercar like, say, the kind of Porsche 911 Turbo S, Audi R8 V10 plus or McLaren 570S or 570GT you could buy for this kind of money. Aston Martin has its V8 Vantage model to compete in that segment. So what are more natural DB11 rivals? Well the most obvious one is the Bentley Continental GT. The W12 twelve cylinder version of that car costs about £9,000 more than the DB11 V8 Coupe, but offers nearly 125hp more. The Bentley's slightly heavier and less agile than this Aston Martin but is slightly more spacious and practical. It really comes down to what you want.

If you've managed to shinny up the greasy pole far enough to be able to afford an Aston Martin DB11 it's doubtful that you'll be overly concerned with the trifling matters of economy and emissions, but they mean a great deal to Aston Martin and here's why. The company needs to reduce the average CO2 output of the models across its range or face punitive EU fines. It's mildly amusing that 'engine downsizing' in 'Aston-speak' means dropping the size of the required powerplant to 'just' 5.2-litres and adding twin turbochargers to it. Nevertheless, that's made quite a difference in terms of efficiency when you compare to the old DB9 (which chugged out a decidedly old-school 389g/km of CO2 and averaged only 17.2mpg). In comparison, the DB11's emissions in V8 form are rated at 230g/km of CO2, while the combined consumption return is rated at 28.5mpg. For the V12 version, the figures are 265g/km and 24.8mpg. To give you a perspective on just how much of an improvement this represents, we'll tell you that the old 6.0-litre V12 still fitted to the V12 Vantage model manages 19.2mpg on the combined cycle and 343g/km of CO2.

The founders of Aston Martin, Lionel Martin and Robert Bamford, had a clear vision. To create sportscars with a distinctive character. Cars built to a high standard, exhilarating to drive and to own. Cars with power, beauty and soul. Over around 100 years, this British brand has made motorcars just that way, building nearly 60,000 of them, 80% of which are still in use, cherished, driven and raced by enthusiastic owners all round the world. In all of this history though, no model line has been more significant to the future of this marque than this one. The DB11 was the first Aston of the modern era. The first to show that the company could now take on its German and Italian rivals head-to-head, wheel-to-wheel. Faster, more sporting models have since followed this one from the Gaydon factory, but arguably, there's nothing quite like a DB11 when it comes to pure GT-style elegance. There are certainly quicker, higher-tech or more sharply handling options in the market. But when you've miles to put on the clock and want the journey to feel special rather than just effortlessly rapid, it's hard to think of anything much better.