As a founder partner of World EV Day, the Vanarama Team wanted to do something special to mark the occasion… so we made an Auto Sensory Meridian Response (ASMR) video using a brand-new Nissan e-NV200 all-electric van to run over building materials for your viewing & listening pleasure. Vanarama's Van Expert Tom Roberts explains why.

All the best ideas have small beginnings & Vanarama's Electric Van ASMR video is no different. It started with a desire to celebrate World EV Day & ended up with us becoming founder partners of the whole event & creating this video as part of an interconnecting PR & content campaign involving multiple other companies & brands. One of our additions to this campaign was the video below:

You're probably sitting there wondering why we decided to tap into the ASMR YouTube phenomenon to celebrate this event - so let's start at the beginning.

It all started with a phone call & the eventual decision to join forces with Green.tv to become a founding partner of the inaugural World EV Day. The day, which took place on 9th September 2020, is a celebration of global electric mobility with the aim of raising awareness that electric vehicles will eventually be the way we all get around.

Campaign planning began in earnest, with multiple ideas thrown around. Could we get every electric vehicle in the market here to Vanarama HQ? Could we do EV road tests? Could we make videos that show off the differences between electric and conventional fuel vehicles?

That last question was what eventually led to the ASMR video idea. We already have video reviews of electric vans & vehicles all over our YouTube channel, but we had nothing that showed off in a subtle way a major benefit of electric vehicles. Some of the major benefits are highly publicised - zero emissions, clean driving, grants & tax breaks - but the one people often miss is the lack of engine noise created by a electric van.

An ASMR video is all about sound and visuals (& the resulting pleasurable physical reaction to them), but most of the videos that involve a vehicle running over objects are (in my opinion) ruined by the engine noises.

With an electric van we could run over all sorts of materials without ever worrying about the engine noise obscuring the sounds - after all, the whole point of an ASMR video is the sound of the materials breaking or crunching being clear.

That's A Wrap - Choosing Our Vehicle

The vehicle we chose to be our ASMR video star was the Nissan e-NV200 electric panel van. Nissan's Leaf electric car is a pioneer in the car world & the e-NV200 is certainly considered just as important in the van world - it was a no-brainer then. But we didn't want it to look boring, we wanted the vehicle to make an impact - so we wrapped it! Check out the video below:

As for the van itself, it performs incredibly well - a quoted range of nearly 190 miles on a full charge in city driving means this vehicle won't produce any range anxiety among potential users. A competitive payload of nearly 700kg adds to the e-NV200's benefits & shows that practicality has not compromised in the switch from diesel fuel to electric power. It's also far more affordable to get behind the wheel of one by leasing it, so make sure you check out our e-NV200 lease deals.

The results of our work are there to see in the full ASMR video at the top of the article. I could wax on about how the shoot went, what we did, the immense fun we all experienced running over building materials, but the video & this behind-the-scenes picture speaks for itself. 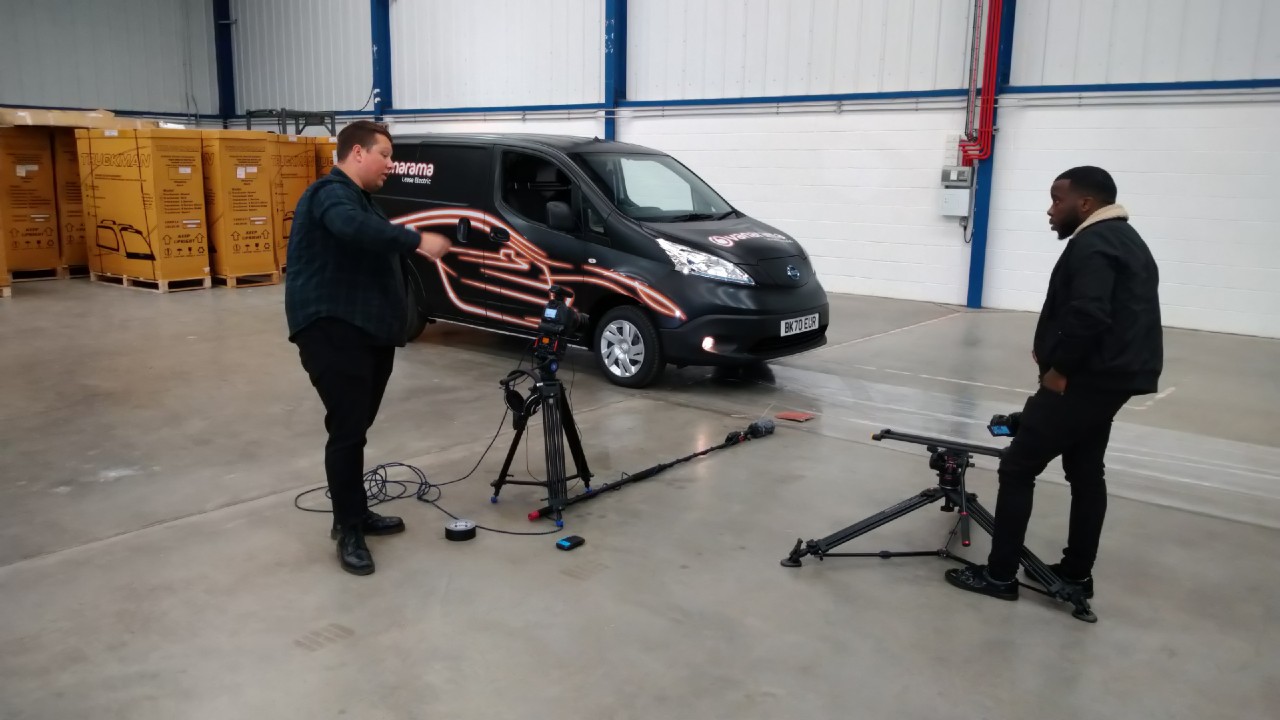