To give it its official, full name (and be prepared, because it does go on a bit), this is the Porsche Panamera Turbo S E-Hybrid Sport Turismo. Now, leaving out the ‘Porsche’ bit for a second, because you should know what this particular German car company is all about by now, the rest of it probably needs some explaining.

The ‘Panamera’ name is given to Porsche’s large luxury saloon that’s powered, either entirely or in part, by petrol internal-combustion engines (ICE). Except, the Panamera isn’t actually a saloon, it’s a fastback – the whole tailgate hinges at the top and allows access to the cabin, which means it’s a 5-door car and not a 4-door model. This is unlike the all-electric analogue in the Porsche range, the Taycan, which looks like a fastback but is in reality a 4-door saloon. 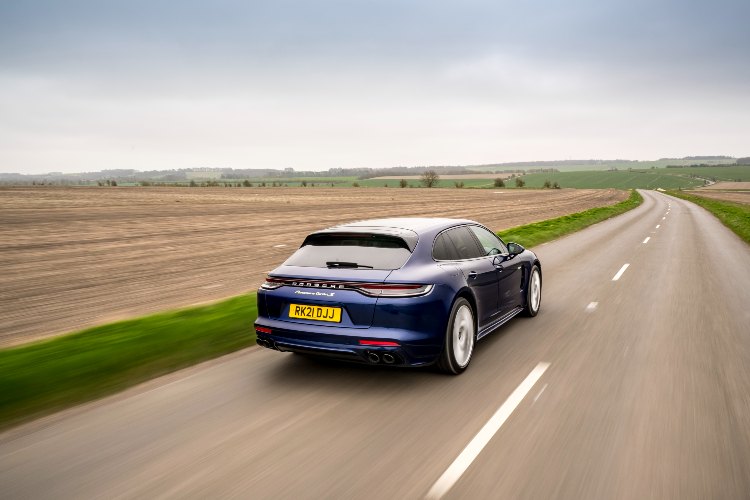 Anyway, skipping to the end of the long official name, the ‘Sport Turismo’ epithet rather renders all this saloon/fastback chat totally irrelevant, because ST means this model’s an estate. So then we come to the juicy bits. The ‘Turbo S’ relates to the ICE in this instance, a monster 4.0-litre biturbo V8 petrol with 571hp and 770Nm to play with all on its own. To that, Porsche adds a 100kW (136hp)/440Nm electric motor and a 17.9kWh lithium-ion battery pack with which to power it, and so what you have here is a plug-in hybrid electric vehicle (PHEV) with colossal combined outputs of 700hp and 850Nm. And a colossal price tag to match, too, coming in at beyond £140,000 in ‘basic’ specification.

As the flagship of a selection of no fewer than 9 Panamera Sport Turismo models, the Turbo S E-Hybrid promises to be master of all trades and jack of none, then. But is it? Time to find out. 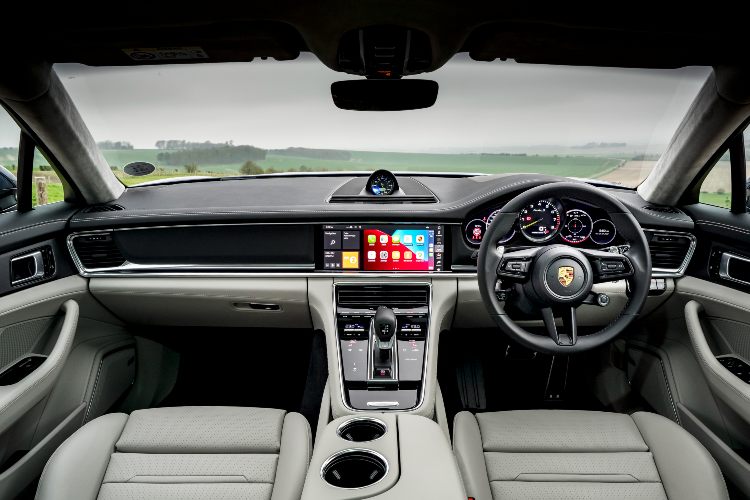 The facelift of this second-generation Panamera in 2020 really tidied up the looks of what was already a very handsome vehicle. It’s a particularly good-looking car in Sport Turismo format, too, and the updates include double-bar LED strips in the front bumper plus a reprofiled light array at the rear of the Porsche.

If you want to clock that this is the ultimate Sport Turismo, you need to note the ‘Turbo S’ legend on the boot and then the splashes of bright acid green in key locations – such as for the brake callipers, for the sides of said Turbo S badging and also for the discreet ‘e-hybrid’ logos on the front wings.

The inside is as good as the exterior and, if anything, even better. You sit low and ensconced by the wheel, dashboard, centre console and door cards, giving you a sports-car-like seating position as the driver. Ahead of you is a large central rev counter, plus 2 configurable TFT screens which present a ‘5-dial’ display for the cluster. Sitting proudly in the middle of the dash is the glorious 10.9-inch Porsche Communication Management (PCM) infotainment display, while the attractively sloped transmission tunnel has all manner of ‘touchpad’ buttons on it. The quality of everything you operate and lay hands on is also absolutely first-rate, so the Panamera thankfully feels every inch like the top-end luxury item it so surely purports to be. 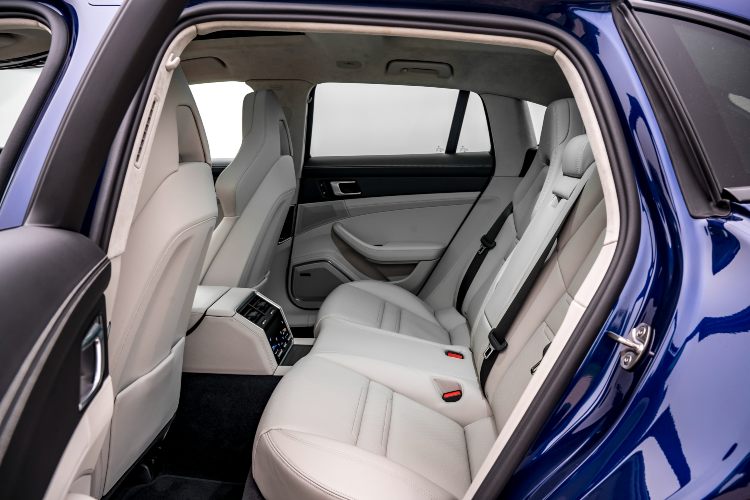 Aside from the expense of it, there are a few issues with the Panamera TSEH ST. Although it’s a physically big car – measuring more than 5 metres from nose to tail – the Porsche doesn’t really seat 5 adults. It has what is called a ‘4+1’ seating configuration, which means the centre-rear seat is smaller, higher-set and probably usable by smaller children only.

It’s also very, very heavy. PHEV gear adds a lot of weight to any vehicle, never mind a luxury estate with a V8 engine in the first place, and so the Panamera Turbo S E-Hybrid Sport Turismo weighs a whopping 2440kg overall. In context, that’s heavier than a lot of SUVs these days, even the bigger ones, and it also represents a 230kg weight penalty to the 630hp non-hybrid Turbo S model that’s 5-grand cheaper than the PHEV. So although this is the most powerful car on paper, it turns out the TSEH is a tenth-of-a-second slower to 62mph than the ‘regular’ Turbo S, at 3.2 seconds plays 3.1 seconds. Obviously, that’s still a searingly fast acceleration time in anyone’s book, but that weight issue will come back to haunt the Turbo S E-Hybrid in the final reckoning. 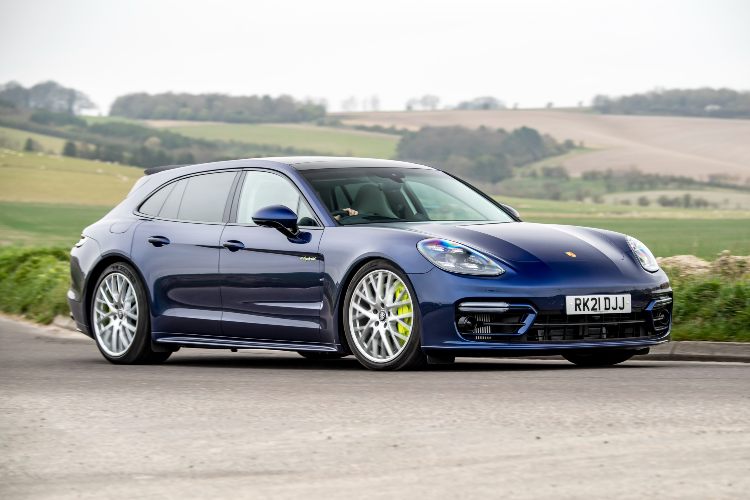 This is a tricky one to sum up. On the one hand, what you have here is a beautifully appointed Porsche that promises to do everything very well. It has 700hp, a 196mph top speed and that supercar-smashing 0-62mph time of 3.2 seconds, yet there’s a big boot out back, seating for 4 adults and the ability to travel up to 30 miles without using its engine at all.

On the other, you have a model of Panamera Sport Turismo that might have all the quantifiably ‘best’ metrics in its range, but one which feels a bit compromised, if we’re honest. You see, it never really shakes off its near-2.5-tonne kerb weight, so while the mighty V8 engine is an absolute peach – giving the Turbo S E-Hybrid a serious turn of pace when you want it, thanks to that electrical back-up – this Porsche never quite feels as dementedly fast as the expectation set by the startling on-paper figures. It’s certainly insistent and rapid, this German PHEV, when you do decide to flatten the throttle, but it doesn’t feel outrageously muscular.

This permeates into the handling. Let’s be clear, the Panamera TSEH ST is a fabulous thing to drive, with exceptional steering feel, nigh-on-immaculate body control and the sort of grip levels you’re only going to get from a car sitting on goliath 21-inch alloys with incredibly fat rubber; it also has all the traction advantages of Porsche’s 4-wheel-drive system, which means you simply point the Sport Turismo where you want it to go and it goes there, very quickly.

But supposedly ‘lesser’ models in the hierarchy, like the Turbo S and even the GTS further down the tree, have a more joyous fluidity to the way their chassis breathes over challenging tarmac. The TSEH always feels like you are sledgehammering a road into submission with absolute power and the sort of mass usually reserved for small planets. At no point does this car ever really dance or feel like it will have many secrets to unlock once you get up to and beyond the limits of its suspension.

Of course, you might at this point suggest that such driving styles will likely result in illegal speeds on the roads, so is it fair to mark the Panamera TSEH ST down for that? And we’d counter by saying… yes, we think it is. There are 2 far less potent models of the E-Hybrid PHEV drivetrain in the Panamera Sport Turismo range and both of those blend everyday civility with far more affordable purchase and running costs. The Turbo S E-Hybrid, meanwhile, has set its stall out to be the most exciting and ultimate iteration of Porsche’s big wagon, but it feels strangely flat compared to many of its lighter, cheaper stablemates.

Naturally, it’s a delight to just cruise around in it, revelling in the totality of its sound suppression, and being deeply impressed by the Porsche Active Suspension Management (PASM) and adaptive air-sprung set-up, which cushions away the worst of road imperfections long before they reach the passenger compartment. Nevertheless, there’s an underlying firmness to the TSEH which speaks of the sheer amount of vehicle that’s being suspended here, so we once again temper our enthusiasm for the engineering brilliance of the Panamera Sport Turismo by saying there are other models in the range which ride a bit better than this 700hp behemoth. 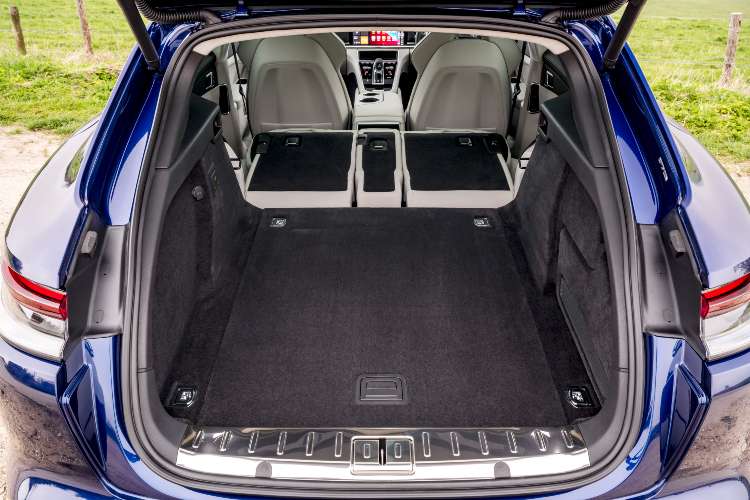 Don’t go buying any Panamera Sport Turismo expecting furniture-swallowing load space at the back. The Porsche is a lifestyle estate, rather than a pragmatic one, so a 418-litre boot with all seats in play isn’t massive – nor is a 1287-litre figure with the second row of seats folded down. That’s slightly less than non-plug-in models of the Sport Turismo, which measure 487-1356 litres, but even those aren’t the sort of cargo-capacity numbers that would worry a Volvo or Mercedes estate. As we’ve already said, there’s also the seating issue – it’s a ‘4+1’, not a full 5-seater – and the simple physical size of the Panamera Sport Turismo (it’s 5 metres long and nearly 2 metres wide, so a small car it ain’t) also means it can’t just be parked, without thinking, in any old space going. However, the battery pack has been enlarged from 14.1- to 17.9kWh as part of the PHEV’s facelift, so a greater electric-only driving range is the reward for those with deep enough pockets to purchase the Panamera flagship. 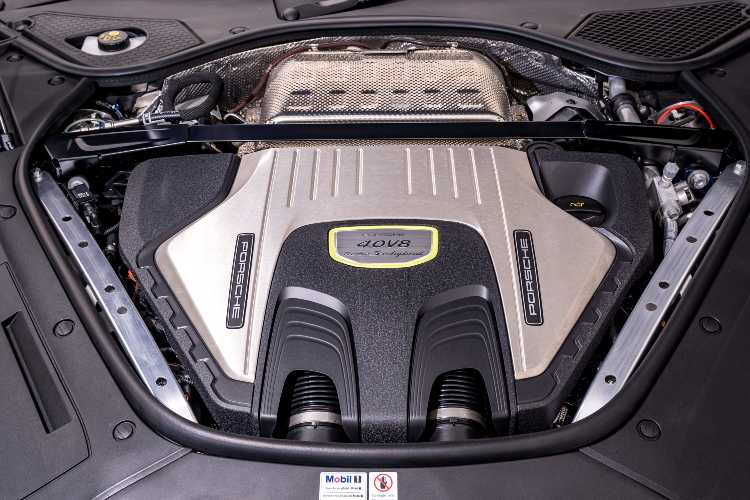 While no model of Panamera is what you’d call cheap, the Turbo S E-Hybrid Sport Turismo is right at the other end of the spectrum. Its list price can easily be swelled from the original £145,000 to beyond £160,000 if you start optioning up some desirable extras, while claimed 94.2mpg combined is not a realistic figure – we saw more like 31.5mpg from the TSEH across 460 miles of testing, with a best hovering near 50mpg. The CO2 output, however, makes sense for business users, as it’ll attract a lower benefit-in-kind requirement thanks to standing at just 69g/km. For fiscal reference, Vanarama does a leasing deal on the Panamera 4 Sport Turismo, still capable of 0-62mph in 5.3 seconds, from around £918pcm.

The Panamera takes its name from a particularly dangerous road race held in Mexico in the early 1950s, which was called the Carrera Panamericana. And yes, that same race – at which Porsche competed with the 550 to good effect in 1953 – is the reason many models of 911 over the decades have been called ‘Carrera’.

Mercedes-AMG E63S Estate - A mighty wagon, which is perhaps not as thoroughly high-class as the Panamera, but is still deeply appealing.