Why Lease the Audi R8 Coupe? 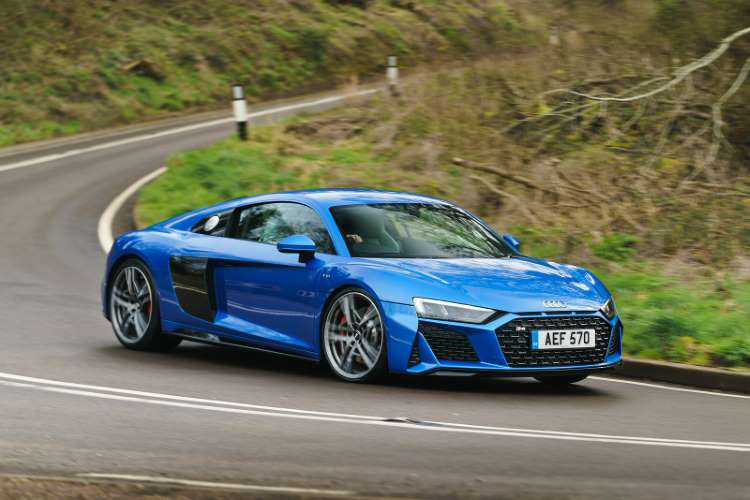 Audi's R8 was already a very credible Porsche 911 rival. But is it really good enough to be taken as a real alternative to a Ferrari 458 Italia or a Mclaren 12C? That's the question this V10 plus flagship variant tries to answer. With a 25PS boost in power to 550PS and a slick 7-speed S tronic paddleshift twin clutch auto gearbox, it certainly has the firepower for the job.

In 1999, Audi entered the Le Mans 24 hour race for the first time. Since then, it has won the legendary endurance race again and again, success commemorated in 2006 by the launch of a car that has since become a milestone for the brand - the R8. Before this model arrived, nobody expected Audi to ever be able to create a credible supercar, much less one able to take on and beat Porsche's all-conquering 911. They did. But time moves on - and so does the opposition. By late 2012, all of this model's most direct market rivals had been either re-launched or substantially revised, most notably the new seventh generation Porsche 911 but also impressive new versions of rivals like the Mercedes SL, the Aston Martin DB9 and the Bentley Continental GT. So the R8 package needed refettlement - and it needed to recognise a changing market segment in which most buyers were looking for hi-tech race-style paddle-shift auto transmission. The original version of this Audi could only offer a jerky, old fashioned R tronic auto set-up that most buyers avoided in favour of the manual 'box. It was this car's one major failing, so the quattro gmbh engineers set out to correct it, creating the S tronic gerarbox that most will opt for in the facelifted version we're going to look at here. Launched in the UK in early 2013, it got minor styling changes, some sparkly LED lights and the option of a more powerful flagship model, the V10 plus variant that I tried, a car powerful enough to take this R8's challenge well into Ferrari territory.

The V10 plus is an R8 built to take Audi's challenge beyond such as the Porsche 911 and into Ferrari territory. It gets the full fat version of the 5.2-litre V10, that used by the Lamborghini Gallardo, developing another 25PS, boosting power to 550PS and torque from 530 to 540Nm. That's not enough to make a huge difference to the on-paper performance figures - the 0-62mph figure is just a tenth better than the standard V10 at 3.5s - but the overall feel of this plus model is rather different. Why? Well the weight's been cut - by as much as 50kgs thanks to weight savings extracted from the wheels, the seats, the bulkhead, the chassis and the brakes. And the suspension's been sharpened and firmed up. The car's more chuckable into corners as a result but personally, I preferred the overall balance of the more compliant magnetic ride adaptive damping system that's standard on the ordinary R8 V10 but unavailable on this ritzier version. With magnetic ride, you can switch the damping between a taut set-up or a more comfort-orientated 'Normal' mode. It gives you more options. But that apart, I found it very hard to criticise this car. Coming to it fresh from stint in a more powerful, pricier Mclaren 12C, I'd expected to be slightly under-whelmed. Instead, this Audi has reminded me all over again just why I loved it in the first place. As with all R8s, this one's so brilliantly driver-orientated courtesy of the decision to give its quattro four-wheel drive system a rear wheel drive-bias: never more than 35% of the torque goes to the front. Throw the car into a corner and it works with you, with perfect driver feedback, no nasty habits and a lovely hard-edged wail as you thrust towards the 8,000rpm red line, the horizon rushing towards you as if on fast forward. If you were someone seeking to graduate from the lower to the upper more powerful tier of supercar ownership, then owning one of these would be the perfect way to ease that transition.

Visually, the R8 remains a distinctive cocktail of low-slung curves and delightful design extravagance - Ferrari, but with a German twist. But it won't appeal if you like the understated elegance of a Porsche 911 or the Max Power aggression of a Nissan GTR. The standard V10 R8 model is impressively light (only 60kgs more than the V8 variant), with a total kerb weight that can be as little as 1,620kgs. A further 50kgs has been trimmed off that figure in the top V10 plus version I'm looking at here, offered only as a fixed-top Coupe. Inside, where there's what Audi calls a 'luxury-level racing atmosphere', the interior remains an object lesson in how to package a two seat car with plenty of space, decent visibility and fantastic build quality. It's most distinguishing feature is what the stylists call the 'monoposto', a stylised large arc that encircles the driver's area of the cockpit, starting in the door and ending at the centre tunnel. Ahead of you, there's a grippy leather-covered multi-functional flat-bottomed sport steering wheel through which you can glimpse a driver information system that can display the speed digitally and offer a lap time function for track days. And bootspace? Well, your expectations won't be high and they shouldn't be. There's 100-litres of room in the front boot for a couple of squashy bags and there's also a slot behind the seats big enough, Audi says, for a couple of golf bags - but otherwise, you'll be needing to travel pretty light.

There are now three tiers of R8 Coupe ownership. First, the 430PS 4.2-litre V8 model priced at around the £95,000 mark. Then the 525PS 5.2-litre V10, priced from either just over or just under £115,000, depending on derivative. And finally, the variant I'm looking at here, the even faster 550PS R8 V10 plus, priced in the £125,000 to £130,000 bracket. Around 82% of customers now want automatic transmission thanks to the improved 7-speed S tronic gearbox, which is offered at a £2,900 premium over the 6-speed manual. That might sound expensive but it's actually less than Audi charges to trim the enginebay in carbonfibre. So overall, how does the R8 V10 plus stack up as a value proposition? Well the figures say it all. A rest to 62mph figure of 3.5s and a top speed of around 200mph are enough to put this car into Mercedes SLS AMG and Ferrari 458 Italia territory - for around £50,000 less. Buyers of this plus variant don't get the magnetic ride set-up offered in the standard V10 model. That, the £10,000 premium and the fact that it comes only as a coupe may all be reasons why you'd want to stick to the ordinary V10. Having said that, this particular R8's ability to challenge Ferrari and Mclaren so affordably is almost unique in the high performance sportscar market. And, as well as the extra performance, the 'plus' package also gets you lovely bucket seats, carbon trim on the spoiler, the door mirrors and the sideblades, gloss black five-spoke wheels and the otherwise pricey ceramic brakes.

Audi's experience in lightweight aluminium space frame technology has certainly helped this car's cause when it comes to running costs but let's be real here: no supercar is going to be cheap to run and this one certainly isn't Having said that, due to its lighter weight, this V10 plus Coupe variant actually slightly improves the fuel and CO2 figures of the standard V10 model, despite its extra power, returning 21.9mpg and 299g/km in S tronic form. What else? Well with only 29 cars each day being hand built at Audi's Neckarsulm factory, there's enough rarity value about this R8 to keep residuals buoyant enough to match those of its arch-rival, Porsche's 911. There's the standard three year 60,000 mile warranty. And insurance of course is a top of the shop Group 50.

The four rings this car bears on its bonnet don't yet give it the rarified appeal of a Gallardo, a 12C or a 458 Italia but in most meaningful respects, this top V10 Plus R8 model can match them car-for-car. Unlike its Italian rivals, it feels bullet-proof. Unlike its Porsche arch-enemy, it makes a six-figure statement. And unlike any sporting car Audi has yet produced, it's good enough to score a perfect ten.