This is an Alpine A110, a little-known sports car from France to those outside the tighter automotive enthusiast community but one which deserves all the widespread recognition it can get. As you’re about to find out, this is the first car we’ve reviewed on Vanarama’s website where we’ve felt moved to give it full marks. But we digress… 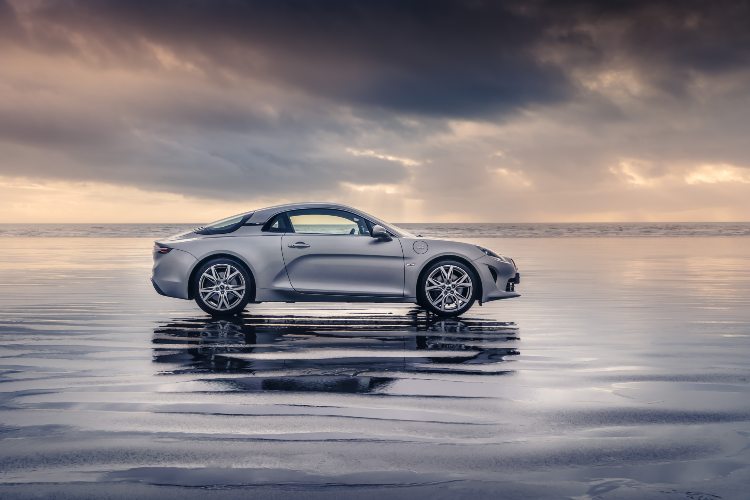 Alpine – pronounced ‘Al-peen’ and not to be mistaken with either the German company which makes upmarket BMWs (that’s ‘Alpina’) or the Japanese in-car electronics firm (that’s also ‘Alpine’ but the more traditional British pronunciation, to rhyme with ‘fine’ or ‘Fog On The Tyne’) – is a small outfit which started back in 1955 in the north-coast Gallic town of Dieppe, when the company’s founder raced tuned Renaults. A long association with said French marque meant Renault bought Alpine in its entirety in 1973, and essentially used it as its top-end performance and motorsport arm in the aftermath of its purchase.

One of ‘old’ Alpine’s greatest-ever products, then, was the original A110 Berlinette, built from 1961-1977. This was a lightweight, small coupe that was rear-engined and rear-wheel drive, which went on to prove itself a force to be reckoned with on the world rally scene of the early 1970s – in fact, Alpine was the first-ever winner of the officially named World Rally Championship (WRC) in 1973.

However, despite making some exotic and truly brilliant cars, Alpine never gained mainstream success and Renault abandoned the name in 1995, instead using the Dieppe factory to make its own high-performance Renault Sport products in the wake of Alpine’s demise. Until… in the 2010s, Renault had a change of heart and decided to revive Alpine, the marque eventually returning in 2017 after a 22-year hiatus with… an A110, natch. But a NEW A110, which looked like the 1960s/’70s classic, only a bit sharper. And here is our review of the latest version, called the Legende GT.

Everything, pretty much. But, before we get onto the eulogy, just a quick word about the modern-day A110 and its model line-up. It is only available as a 2-door coupe with a mid-engined, rear-wheel-drive set-up. It launched originally in 2017 with a development of the 1.8-litre turbocharged 4-cylinder petrol engine found in the current Renault Megane R.S. hot hatch, only in the Alpine it makes lesser numbers of 252hp and 320Nm.

These might sound like modest figures for a sports car, but as the A110 only weighs 1100kg it is incredibly light by current car standards, so with the 1.8’s power funnelled to the rear wheels through a 7-speed dual-clutch automated gearbox with paddle shifts, 0-62mph takes just 4.5 seconds and the top speed has to be limited to 155mph.

That’s not what’s superb about the A110, though; it’s the damping. You won’t experience suspension anything like the Alpine’s on anything this side of a Lotus, and even the exalted British company would have trouble matching this sort of chassis genius. The Alpine is light on its feet and softly sprung, so it might feel less tied-down than comparable sports cars – like a Porsche 718 Cayman – but if you trust in what it’s telling you, in the utmost clarity, about its grip/cornering attitude through both the steering wheel and the base of the seat, then you realise just what a thoroughly outstanding car the A110 is.

Naturally, product evolution demanded a Daft Punk model (harder, better, faster, stronger), so the A110S arrived in 2019. But, somehow, despite a power increase to 292hp (torque remained the same at 320Nm) resulting in a 4.4-second 0-62mph run and 161mph top speed, the harder suspension fitted to the A110S robbed this French fancy of some of its most beguiling wonder.

So what if you could have the uprated 1.8-litre engine, brakes and exhaust of the A110S, only with the chassis settings of the regular A110? Step forward the A110 Legende GT, which is what we’re testing here. 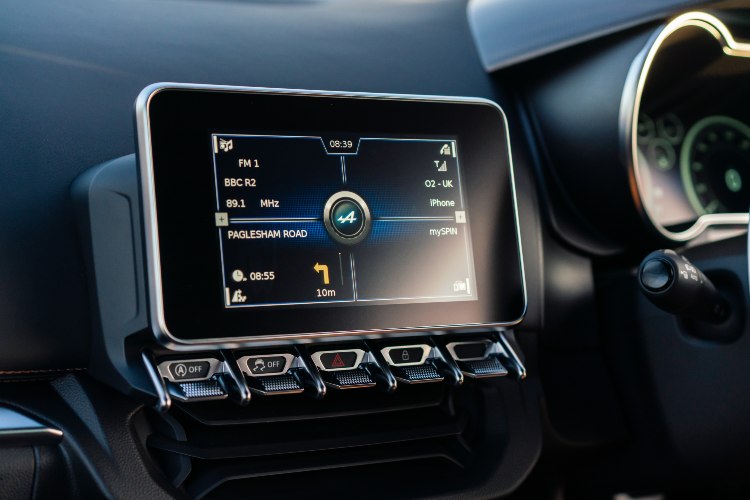 The Alpine A110 – any model, not just the Legende GT – does not have the greatest proprietary infotainment system in the world. In fact, its graphics are exactly the same as you’d get on a modern Suzuki. Which isn’t great, considering the A110 starts at around £49,000 and rises to more than £60,000 at the top of the tree.

Also, for a car dedicated to focused driving, it’s a shame there’s no manual gearbox option – the 7-speed automatic transmission is all you can select. 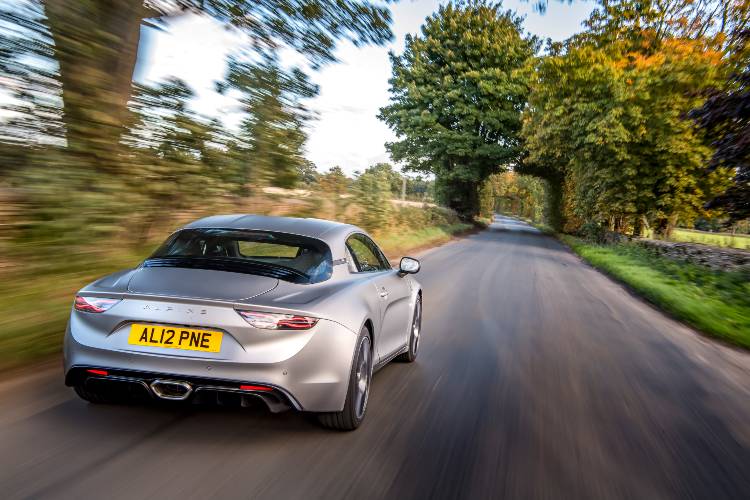 It is heavenly. There’s no other word for it. There are few cars in the world that can dance so elegantly along the road the way the A110 can, while the Legende GT’s softer suspension results in ride and refinement which are both out-of-this-world good. The steering is communicative and rapid in its responses, the noise of the engine hungrily sucking in air (known as the ‘induction note’) is a hard, aggressive bark behind your head which is truly intoxicating stuff, and the seemingly modest powertrain has no problems punting such a featherweight form up the road with startling alacrity. To drive on open roads, the A110 is delightful. Magical, even. It really is.

But because it is so spectacularly well-judged in the weighting of all its major controls, and it’s a relatively small car (physically speaking), and there aren’t many areas of poor visibility out of the passenger compartment (even rearwards through the steeply raked back screen), the A110 is not in the slightest bit intimidating to drive when you’re just pottering about town or taking in a motorway drive. Indeed, due to its trim kerb weight, aerodynamic form and fuel-sipping engine/gearbox combo, you can even coerce more than 45mpg from the Alpine on a steady cruise. Honestly, this car is very, very close to flawless in all departments once it’s on the move.

The Alpine A110 is not a practical machine, in any way, shape or form. Due to the placement of its engine and its small road footprint, it is a strict 2-seater in the cabin and the boot space is restricted to a flat, 100-litre compartment under the ‘bonnet’ at the front of the car, as well as a secondary 96 litres located behind the engine at the back of the A110. This area gets very hot, what with a 292hp turbocharged 1.8-litre engine sitting right next to it, so don’t put your expensive chocolates and/or white wine back there if you’re returning from a European road trip or anything. 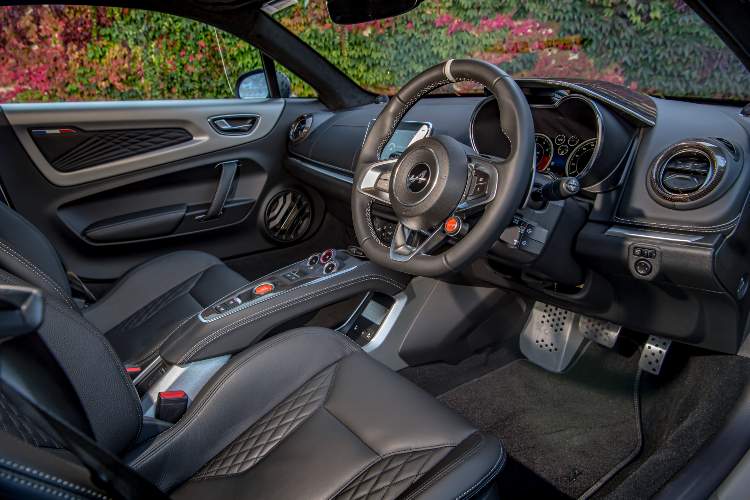 Inside the cabin, it’s not much better. There are spaces behind the seats for the storage of a few odds-and-sods, while a neat central ‘bow’ arrangement for the gear selection buttons, window switches, start/stop button and the electronic handbrake also includes an underslung storage tray that’ll take a smartphone. There’s a place to store the flat Alpine keycard just near the  intuitive climate controls, too, but both door pockets and any sort of glovebox are absent, presumed missing, and there’s just 1 shallow cupholder at the back of this arched contrivance, so if both occupants are coffee fans then at least 1 of you (hopefully the passenger) is going to be left permanently holding a hot drink.

As stated, the Alpine retails for between £50- and £60k (the Legende GT is more like £63,000 but is a limited-time model only), so it is not a cheap car. However, that is broadly comparable with its rivals, like the Porsche 718 Cayman and the Toyota Supra. Alpine also offers a 3-year, 60,000-mile warranty on all its vehicles, although the mileage figure is unlimited for the first 24 months. So get all your driving in early on that basis, should you decide to take the plunge on an A110.

Official figures peg this A110 Legende GT at between 153- and 158g/km of CO2, with fuel economy of anything from 40.4- to 41.5mpg, so the Alpine will not break the bank to run like rival cars with larger 6-cylinder engines – which tend to still offer the same on-paper performance, because they’re much heavier than the A110. 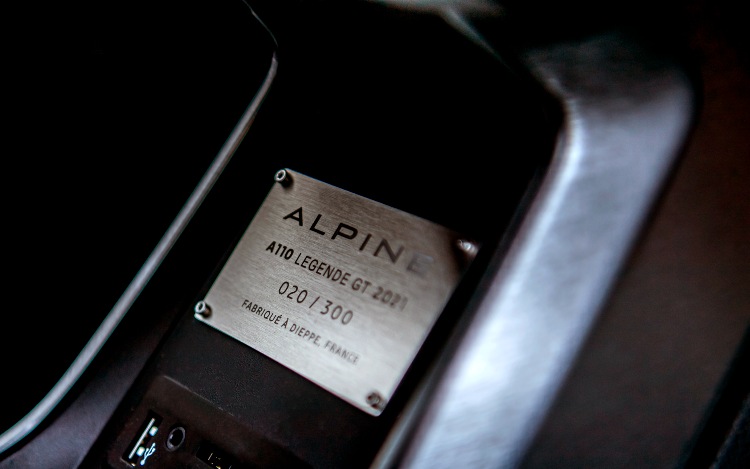 The Legende GT is a limited-edition model of the A110, with just 300 being built for Europe. Its svelte, attractive bodywork is finished in either Mercury Silver matte-effect paint with a black-leather Sabelt Comfort interior (bucket seats and contrast grey stitching), or an Abyss Blue exterior with exclusive Amber Brown upholstery inside to enhance its mini-grand-tourer credentials.

All Legende GT A110 models have pale-gold Alpine monograms and 18-inch, diamond-cut Grand Prix alloys, behind which are some gold brake callipers. The rear light clusters on this version of the Alpine alone are translucent, while inside there’s a Dinamica microfibre headliner and also gloss carbon-fibre trim elements with a unique copper weave. A numbered plaque below the centre console marks out the Legende GT’s limited status, while standard equipment includes front and rear parking sensors, a reversing camera and an uprated Focal premium audio system.

Don’t fancy the pricey Legende GT? Then the A110 is still available in regular, non-GT-adorned Legende and finally A110S specifications if you prefer.

Phenomenal chassis, not that practical, and has just gone out of production. Drat.

Another incredible driving experience, but not as delicate or ethereal as the A110.

Great fun and another revived nameplate for the 21st century. Straight-6 model is terrific.

Three Things To Remember About The Alpine A110:**