Why Lease the Audi R8 Spyder? 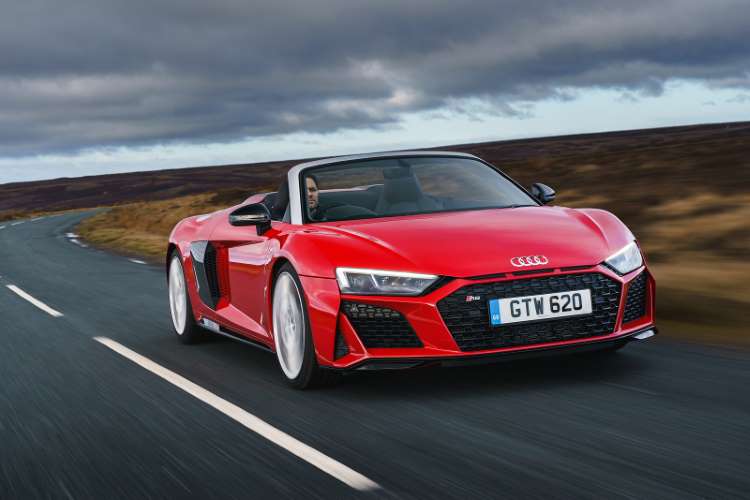 Audi's formidable R8 supercar also comes in Spyder guise - that's 'without a roof'. There was never much wrong with it, save the rather clunky and inefficient R Tronic automated manual gearbox that most buyers preferred to the straightforward stick-shift. Well that's gone now, replaced at the mid-life facelift point by a far slicker 7-speed S tronic system that the majority of this car's fortunate buyers will want. They'll enjoy smarter looks but the same ferocious pace from the V8 and V10 FSI petrol engines that beat beneath the driver. A great motoring experience awaits.

An Audi supercar was the last thing anyone would have expected back in the 80s and 90s when customers had the choice of three Audi models and weren't choosing any of them in any great numbers. Today, the Ingolstadt maker's range is vast and the R8's existence is taken for granted. Sharing many components with the Lamborghini Gallardo, this model is as good a symbol as any of how far Audi has progressed and of all the R8 derivatives, it could be the Spyder convertible that best showcases the brand's all-conquering ambition. These days, it features a more sophisticated 7-speed S tronic automatic gearbox as an option most buyers will want to take up, not least because this dramatically improves both fuel consumption and emissions. But you won't buy this car for its technicalities. Divested of its roof in Spyder form, the R8 can't help but attract attention and looks sleeker than ever with a smart set of all-LED headlights.

It was always a bit of a disappointment to jump into an automatic R8 and have to contend with the rather unsophisticated R tronic automated manual gearbox. With the benefit of a far more sophisticated 7-speed S tronic system, the hand built, naturally aspirated eight and ten cylinder FSI petrol engines are given even more opportunity to show their mettle with the acceleration time from rest to 62mph improved by three-tenths of a second compared with R tronic-equipped equivalents. Both engines are compact, comparatively lightweight and feature motorsport-derived dry-sump lubrication which allows for low positioning and therefore a lower centre of gravity for optimum handling. Mechanically, nothing has really changed, so as before, there's standard quattro four wheel drive and a choice of V8 or V10 petrol engines. The 4.2-litre V8 FSI powerplant produces 430PS at 7,900 rpm, and peak torque of 430Nm between 4,500 and 6,000 rpm. The unit enables the R8 V8 Spyder in manual and S tronic forms to take care of the 0-62mph sprint in 4.5 and 4.8 seconds respectively, and in both cases, drivers will be able to reach a top speed of 186mph if they've an airport runway or a deserted autobahn nearby. Most Spyder buyers choose the 525PS V10 engine which provides 530Nm of torque at 6,500 rpm, enabling the S tronic version to complete the 0-62mph sprint in 3.8 seconds en route to a maximum of 193mph (or with manual transmission, 4.1 seconds and 194mph).

As ever, the R8 embodies Audi's wealth of expertise in ultra-lightweight design. The aluminium body of this Spyder with the Audi Space Frame (ASF) weighs just 216 kg, keeping total weight down to just 1,660kg. This design's elegant, lightweight fabric top, with its largely aluminium and magnesium linkage, perfectly complements the R8's inherent ultra-lightweight design. That roof opens and closes electrohydraulically in 19 seconds, and during driving at up to 31mph. The heated window in the bulkhead between the passenger and engine compartments stands apart from the soft top. The window can be retracted and extended by a switch and also serves as a wind deflector. If sensors detect a potential rollover situation, two strong, spring-tensioned sections are ejected upwards from the seats. Visual changes over the original version of this car are mainly limited to a smart set of all-LED headlights complemented by strip-shaped daytime running lights that form a 'clasp' around the lens. The light-emitting diodes for the high and low beam headlights have been placed above and below the daytime running lights, which are specially actuated to serve as indicators. Static cornering lights are also integrated into the headlights. At the back, there are more LEDs, a repositioned diffuser and an exhaust system that terminates in two round, glossy tailpipe trim sections.

Expect to pay somewhere in the £100,000 to £125,000 bracket for your R8 Spyder, depending on your choice between V8 or V10 FSI petrol power, 6-speed manual or 7-speed S tronic auto transmission. That means a premium of just under £9,000 over equivalent R8 coupe models. That might sound an awful lot of money - and it is - but compared to the Ferraris and Porsches that this Audi can match, it's a steal. You'll need £25,000 to £50,000 more as a minimum if you're thinking of, say, a rival Bentley Continental GTC or Aston Martin Virage Volante. Standard equipment levels now include all-LED headlights and more gorgeous 19-inch alloy wheels, plus owners can expect to find the Audi Music Interface (with iPod connection), satellite navigation, Bluetooth mobile phone preparation and heating for the Fine Nappa Leather-upholstered sports seats. There are nice touches too, like the seatbelt microphones which make it possible to talk on a Bluetooth-enabled mobile phone even when the roof is down. Buyers also get a Bang & Olufsen stereo, DVD satellite navigation heated seats and a launch control system to aid in getting maximum acceleration off the line.

The running costs for an R8 Spyder won't be much of an issue for those who can afford one, but Audi has taken steps to keep fuel consumption within the bounds of decency and depreciation shouldn't be any worse than the average £100,000 supercar. The integration of the slick 7-speed S tronic transmission has reduced CO2 emissions by up to 22 grams/km. That means a V8 FSI Spyder specified in this form can return 22.4mpg on the combined cycle and 294g/km of CO2, whilst an S tronic V10 FSI model manages 21.9mpg and 310g/km.

It seems there are no limits to Audi's ambition and having grown its mainstream range exponentially over recent years, it's also established itself as a supercar manufacturer to be taken very seriously. The R8 Spyder sits at the top of the Audi pile, adding a slickly engineered fabric hood to the standard R8 package. It's a touch more visually elegant than the muscular coupe but those all-wheel-drive V8 and V10 mechanicals mean there will be no let-up in its performance. The most recent improvements haven't fundamentally affected this car's appeal, but they're welcome nonetheless, improving efficiency and further smartening the already jaw-dropping looks. Do you really need more than this in a lottery-winning convertible supercar? You'd have to wonder....