Best Hatchbacks Under £250 Per Month

If you've resisted looking at an SUV & still want a conventional compact family hatchback, you might be surprised at just how much a £250 per month leasing budget could get you & we're going to guide you through your best options at this price point. 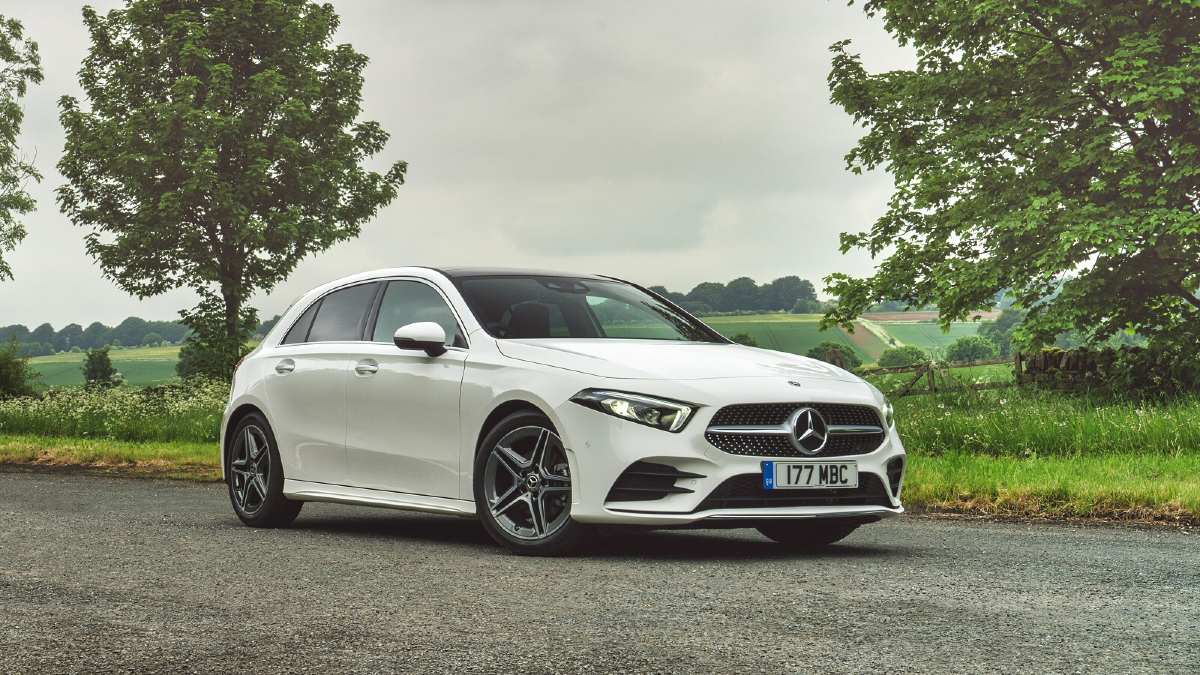 Mercedes' smallest model didn't begin to really sell until the company started copying what its competitors were doing. That happened with the 3rd generation 'W176'-series model of 2013, which got a conventional hatch shape with some sporty cues & a few premium touches. It's an approach that continued – but evolved – with this MK4 'W177'-series design.

We're told to see this A-Class as what the market calls a 'compact premium family hatchback' - in other words, a Focus or Astra-sized car with superior quality & a bit of extra badge equity. It's the kind of profitable product that all the mainstream makers wish they could sell but which is primarily defined by this car & its  2 closest competitors, the Audi A3 & BMW's 1 Series.

These days, the A-Class is offered with a choice of hatch & saloon body styles. Inside, you get the sophisticated twin-screen dashboard technology that characterises all of Mercedes' current compact models. A longer wheelbase for this MK4 design means more interior space & with the hatch, you get a decent 370-litre boot too, which grows in size to 420-litres with the saloon.

A wide range of engines are offered, but to come in under our £250 a month budget, you'll need the base A180 & A200 petrol variants. These use a 1.3-litre four-cylinder petrol power plant putting out either 136hp (A180) or 163hp (A200), an engine paired with 7G-DCT 7-speed automatic transmission. Within this budget, in our 'Offers' section, you'll find an A180 AMG Line Executive auto model– or an A200 auto variant with either AMG Line or AMG Line Executive trim. 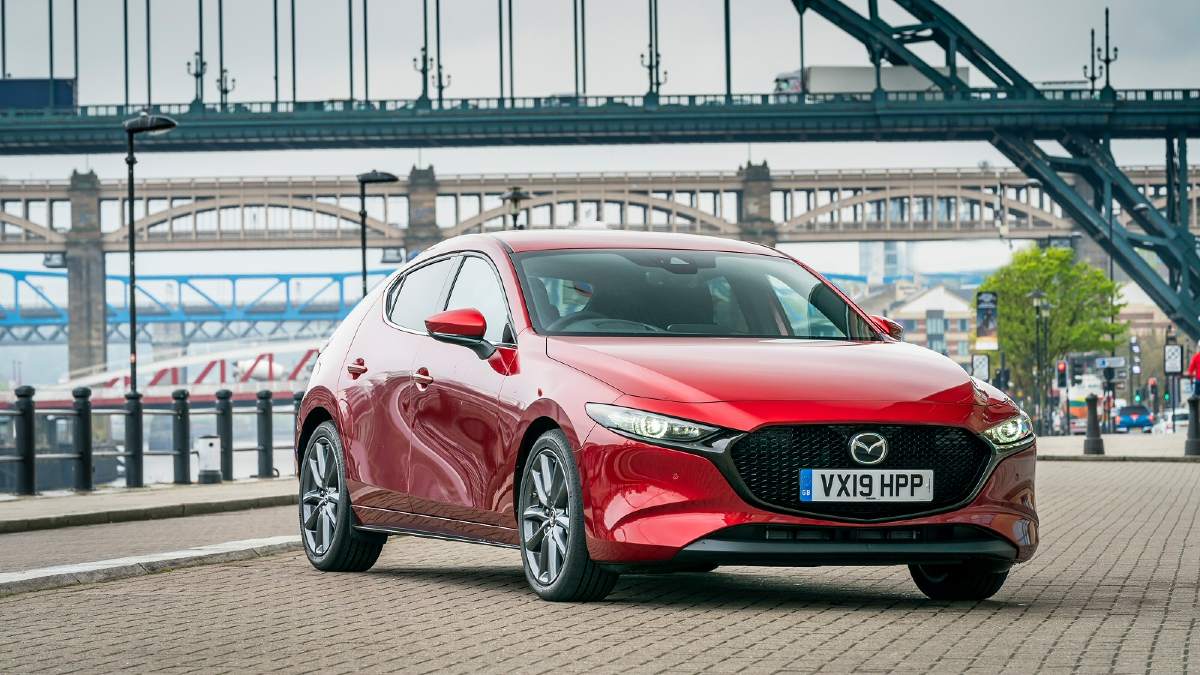 Selling a conventional family hatch when the trend is to buy a more fashionable SUV is hard enough. If you're a volume brand trying to break the stranglehold that established players like Volkswagen's Golf & Ford's Focus have in the family hatchback sector, your job is even harder.

All of which partly explains the relative lack of headway that Mazda has made with the Mazda3 model line since it first arrived back in 2003. But I think this sleek 4th generation version will do rather better.

The styling & the engineering is unconventional. Unlike virtually every other car on the market, no body swage lines decorate the panel work of the hatch & Fastback saloon models on offer. The Mazda3 also ignores the current fashion for turbocharged engines, though the unit we'd recommend, the 180PS 2.0 Skyactiv-X petrol powerplant, does use some degree of supercharging to deliver an impressive balance of performance & economy.

Inside, you get what could be the nicest interior in the segment. Plus standard equipment items you'd have to pay more for with competitors & loads of camera-driven safety kit. Rear passenger space is a little restricted though & the boot of the hatch (351-litres) isn't particularly large, though that grows to 450-litres in the saloon. Our £250 a month budget allows for a hatch with plush 'GT Sport' trim & the standard 122PS 2.0 Skyactiv-G petrol engine. 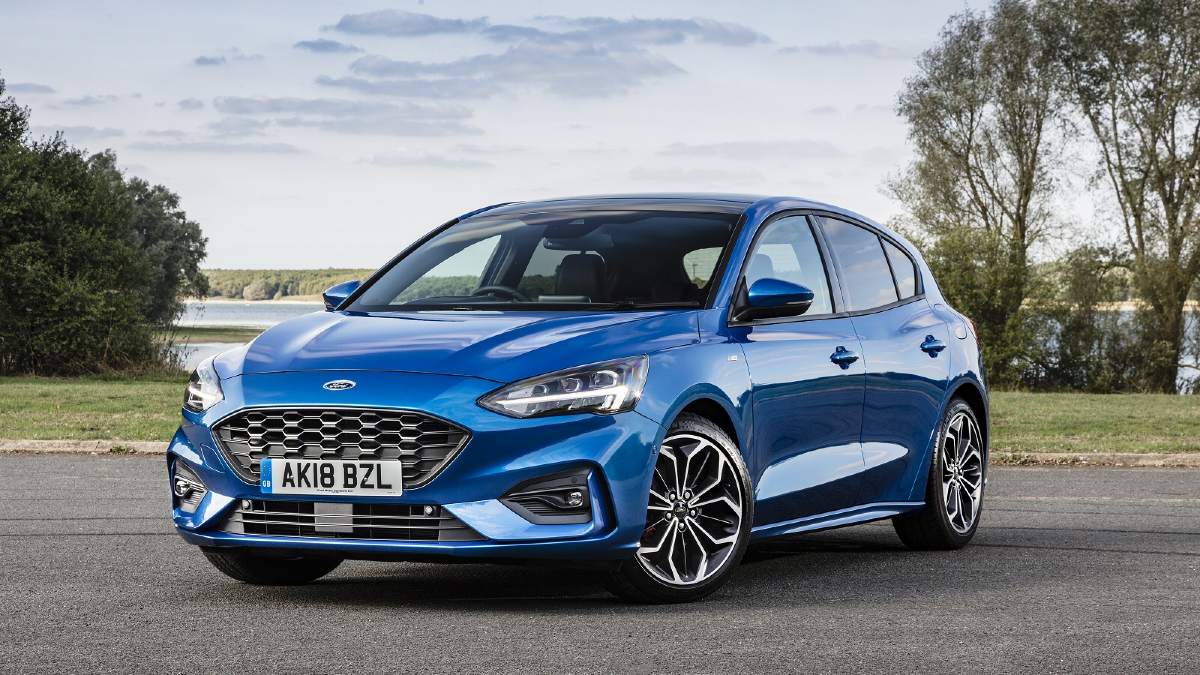 This 4th generation Ford Focus 'shares the same DNA' as the original model we saw  2 decades ago. Has any version of this car entertained quite as much since? Possibly not, though this Ford has still managed throughout that time to hold on to its mantle as the best-handling contender in this category. The driving position, the feedback through the wheel & the way the car responds as you throw it into a corner all have long represented a benchmark in the family hatchback segment. Ford claims to have further developed them to keep this MK4 model ahead of the chasing pack.

Quality's taken a decent step forward too, with smart metallic highlights & soft-touch materials covering most of the higher surface areas, while hard, scratchier panels are generally banished to lower areas you'll rarely touch. Rear seat space is class-competitive & there's more boot capacity than there used to be – 341-litres in the hatch & 575-litres in the alternative Estate variant.

On the engine front, the big news is the adoption of mild hybrid technology for the volume 1.0-litre EcoBoost  3 cylinder turbo petrol engine that most Focus customers choose. This unit can also be had in conventional form – which is what features in the 125PS model that features in our 'Offers' section, complete with sporty ST-Line Nav trim. 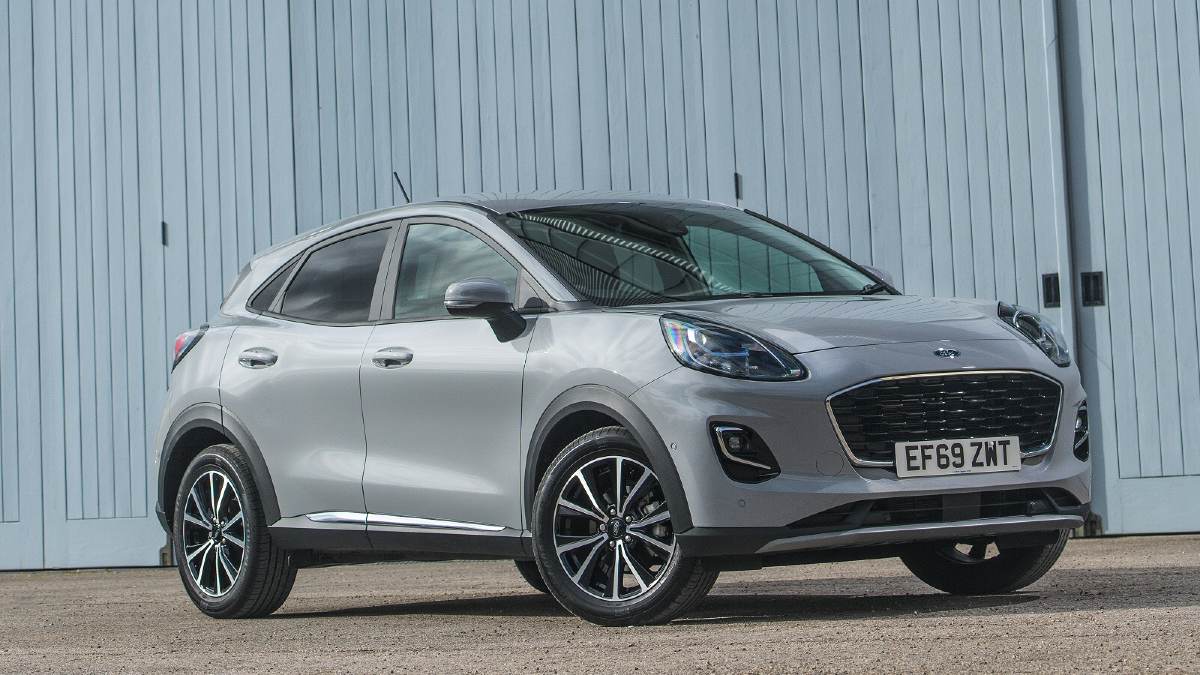 Here's a Ford Puma – but maybe not as you know it. Powered by a hybrid engine – but again, maybe not as you know it. The Puma model line now serves the smallest, most fashionable end of the crossover segment & its engine isn't full electric. Once you've adjusted to both these things & taken a long, hard look at what Ford has brought us here, I think you'll like what you'll find. Frugal, fun & well connected, it fits with the spirit of its time. Just as the original Puma model did.

Visually, there's certainly a lot going on here. The original Puma was smaller than the Fiesta it was based on. This one's quite a lot bigger, its 5-door SUV body being 46mm longer, 54mm higher & 71mm wider, plus the car has a 95mm longer wheelbase than the Fiesta.

Inside, up front, much of the switchgear is shared with a Fiesta, but a key design difference is the 12.3-inch instrument cluster screen, which is standard on ST-Line models & springs into life when you select one of the driving modes. It's almost infinitely customisable with information between the  2 virtual gauges. In the rear, you realise this model's supermini origins – it's pretty compact space-wise, but there's a 465-litre boot with a neat 'Megabox' lower recessed area which allows you to carry tall items like electrical equipment upright. Our £250 a month budget here would get you this car with the volume 1.0-litre EcoBoost mHEV mild hybrid 125PS petrol engine & Titanium or sporty ST-Line trim. 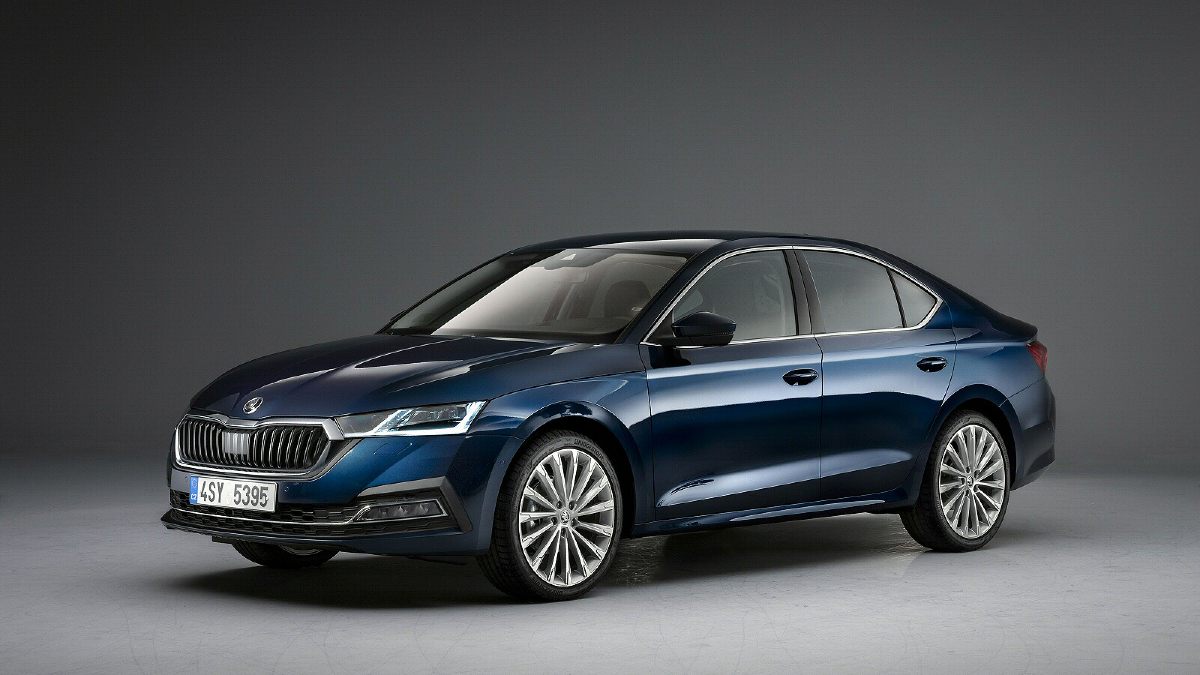 The Skoda Octaviaremains one of the most fundamentally important cars in the Czech brand's line-up. This model's name plate actually dates back to 1959, but its real significance began in 1996 when it first appeared on one of Skoda's modern-era Volkswagen-engineered models. This was a Golf-segment car with Mondeo-segment space, a recipe the market quickly embraced & one which continues today with this latest 4th generation model, offered as usual with a choice of hatch or estate body styles.

This MK4 design has taken a slight step up in size, the hatch version being 19mm longer & the estate variant 22mm longer than before. Inside, the cabin's now much classier & Passat-like, with most models getting a 10-inch central infotainment display.

As usual with the Octavia, a major selling point is interior space, especially in the back where there's the kind of legroom you might expect from a car in the next class up. Plus there's a big 600-litre boot in the hatch – it's 640-litres in the estate. Engine-wise, the brand's latest mild hybrid technology is available if you order either of the  2 volume TSI petrol engines (1.0-litre & 1.5-litres in size) with DSG auto transmission. There's also a 2.0-litre diesel with either 115 or 150PS. Plug-in hybrid options feature further up the range. 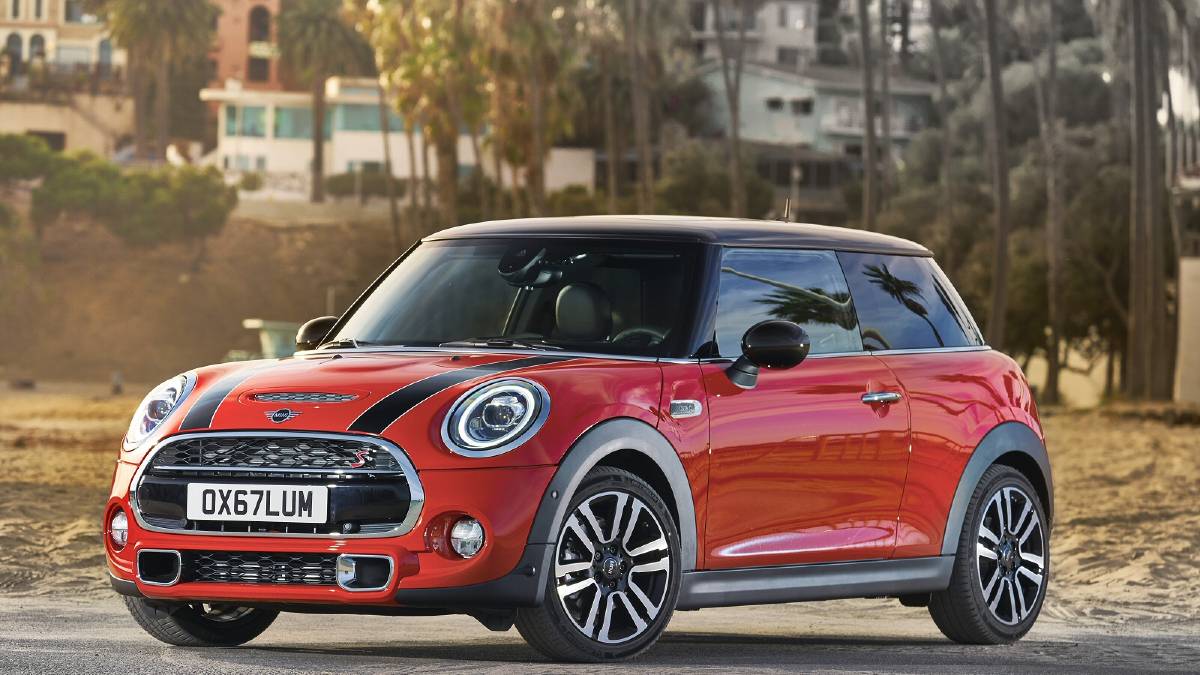 The MINI Hatch is a true original. In this revised guise, the 3rd generation 'R56'-series version has become smarter & more sophisticated, & can be more individual too. Plus some re-fettling work has been done on the punchy range of the 3 & 4 cylinder engines. In short, this car claims to have come of age. As a brand, MINI has come to mean all kinds of things but it's in its simplest 3 & 5-Door Hatch models that the company's products are most iconically recognisable. This 3rd generation 'F56' design was first launched in 2014, but 4 years on was significantly updated to create the current car.

If you're in a MINI Hatch, the overall feeling you're going to get is of just another supermini wearing a cute suit, you'd have to question this car's place in the overall scheme of things. Fortunately though, this 3rd generation 'F56' model still delivers the same infectious naughtiness that loyal owners love so much. There's still the same darty steering, the same quick-fire throttle. Both the base petrol models feature 1.5-litre 3 cylinder engines.

There's an entry MINI One model with 102hp, but you're probably going to want the 136hp Cooper version, which can be had within our £250 a month budget with either base 'Classic' or mid-range 'Sport' trim, both with the optional 'Comfort/Nav Pack' included. With 'Sport' trim, there's the option of 5 doors as well as the 3-Door version.

For more motoring news, check out our car blog and, while you're here – why not browse our car leasing specials offers or latest hatchback offers.