We all know that a Ford Fiesta is the smaller hatchback from the Blue Oval, while the Ford Focus is the bigger version. But do you really need the extra space of the Focus? Or is plumping for the Fiesta simply accepting too many compromises in your chosen vehicle? Read on to find out which we recommend, and why.

What’s the deal with the Fiesta? 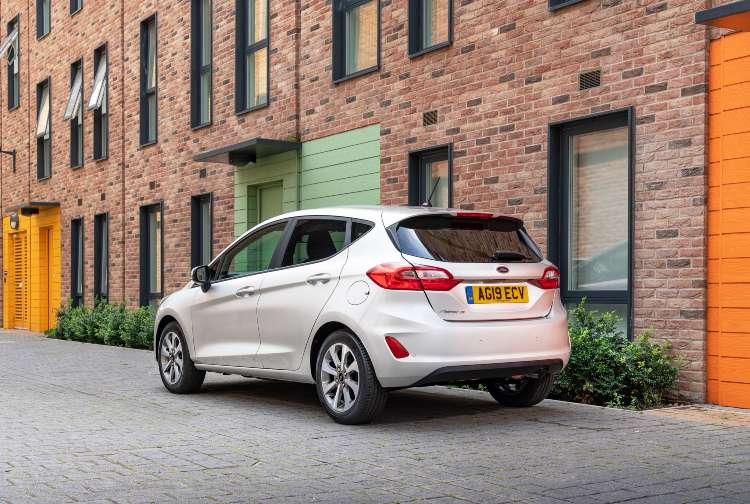 It’s a colossus of the UK marketplace. Until recently, when the Vauxhall Corsa sneaked into top spot, it had been decades since a Ford wasn’t sitting proudly at the summit of the annual sales charts in this country – and the Fiesta has been one of the key players in the company’s long-running domination.

Having been around since 1976, the Fiesta is now into its 7th generation, this particular version of the car arriving in 2017. And Ford’s evergreen supermini has never been nicer to drive, better equipped nor more refined than it is right now. It's available in 11 colours, with various interiors to choose from (see our Fiesta colour guide for details) and there’s plenty of engine choice in the line-up, as well as 2 body styles and even a lifestyle-oriented off-road variant called the Active. You can read our detailed Fiesta review for an in-depth look at all of it's features.

OK, what about the Focus? 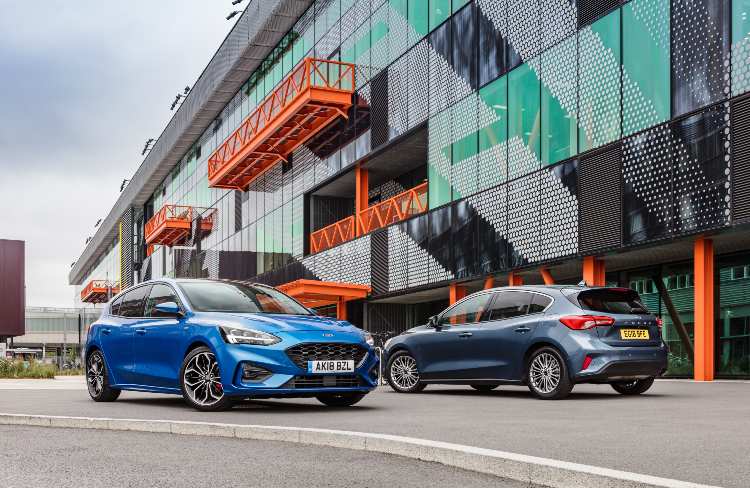 It’s bigger, natch. The Focus competes in what is called the C-segment, against the likes of the Vauxhall Astra, Volkswagen Golf, Toyota Corolla, Honda Civic, Peugeot 308, Renault Megane, SEAT Leon, Skoda Octavia and more. The Fiesta is a B-segment car, or a ‘supermini’, meaning it’s up against the Vauxhall Corsa, Volkswagen Polo, Toyota Yaris, Honda Jazz, Peugeot 208, Renault Clio, SEAT Ibiza, Skoda Fabia and so on.

As a result, not only can you buy the Focus as a 5-door hatchback, but there’s also an estate model to go at as well. The Fiesta, save for a few weird, one-off oddities in the past, has never been offered as an estate, meaning your only choice with the smaller Ford is whether you want 3 doors into the passenger compartment or 5.

Could I really live with a Fiesta if I’ve got a family? 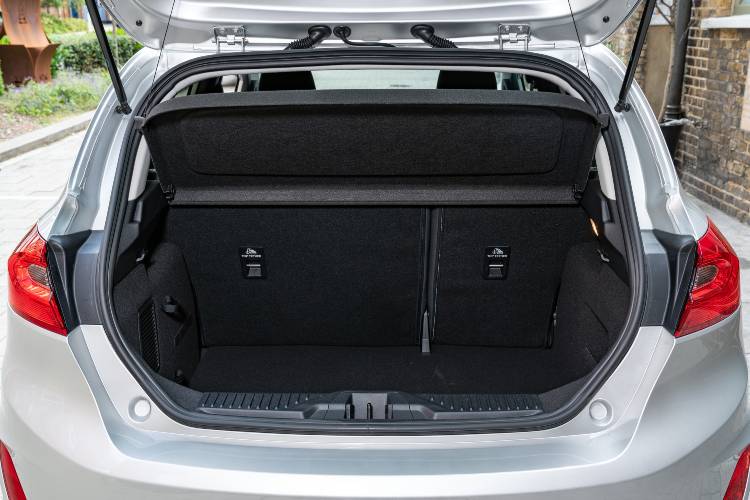 We think so, yes, as long as you pick the 5-door model – getting in and out of the back of the 3-door Fiesta, day in, day out, is going to hack your kids off eventually. Anyway, with a 292-litre boot, split-folding rear seats and up to 1093 litres of space on offer if you fold the back seats down, the Fiesta is now more capable than you think. 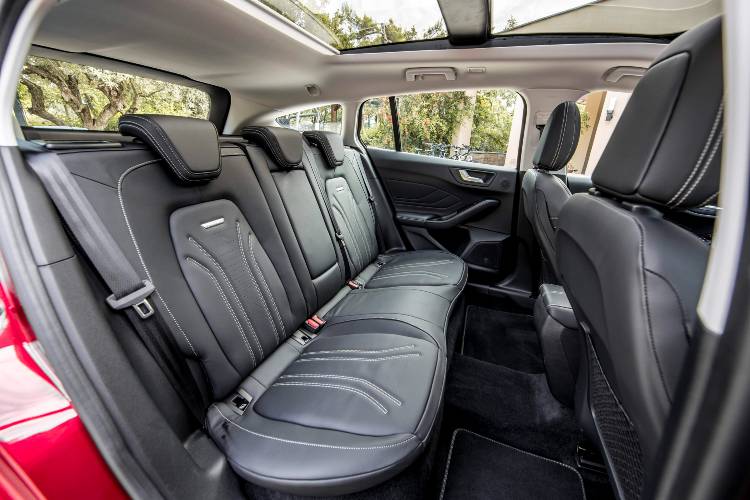 Of course, if you’ve got older kids who are taller, or you need to load more stuff in your boot on a more regular basis, then the Focus is the only solution. It’ll pack in 375 litres with 5 people onboard, rising to 1354 litres with the 2nd row of seats folded away. Opt for the Focus Estate and it’ll swallow a whopping 575 litres of clobber if you need it to, with a maximum of 1620 litres on offer if there’s only 1 or 2 people sitting in the front of the car.

What are the engine choices for the Fiesta and Focus? 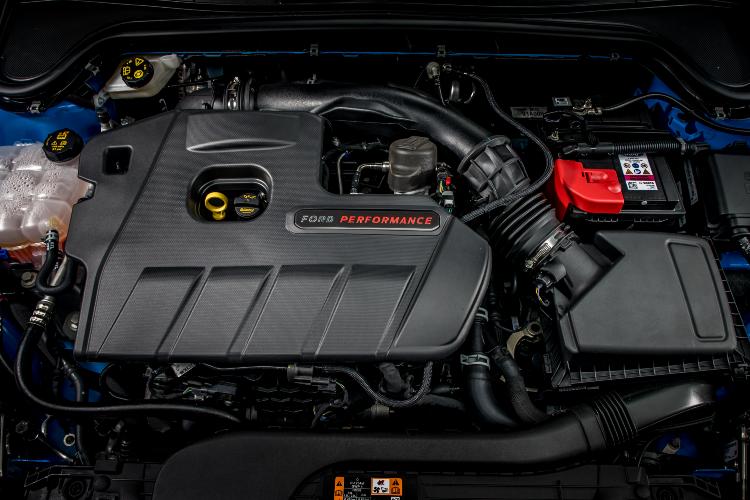 There’s some overlap, as both cars use a series of 1.0-litre 3-cylinder EcoBoost turbo petrol engines, both with and without mild-hybrid (MHEV) assistance. However, as the Fiesta is a smaller car, it uses a 1.1-litre Ti-VCT non-turbo petrol in basic Trend cars that simply isn’t viable in the larger Focus, while – conversely – there are no turbodiesel choices in the Fiesta line, whereas the Focus still runs 3 different diesel options, with anything between 120- and 190hp from either a 1.5- or a 2.0-litre engine.

There’s also more variety for those who need an automatic gearbox in the Focus line, with both 7-speed DCT dual-clutch and 8-speed torque-converter autos provided on a number of engines (petrol and diesel), while the Fiesta has just 1 automatic choice on 1 engine option only.

In summary, the Fiesta is, naturally, less powerful on average. The outputs across the range go from 75- to 200hp, with most cars clustered in the 100-155hp bracket. By contrast, the Focus starts at 125hp and culminates with 280hp, with a glut of drivetrain choices in and around 150-155hp. Fuel economy is about the same on both cars, although like-for-like the lighter Fiesta is going to sip through a little less petrol than the equivalent Focus.

Are there performance versions of these 2 cars? 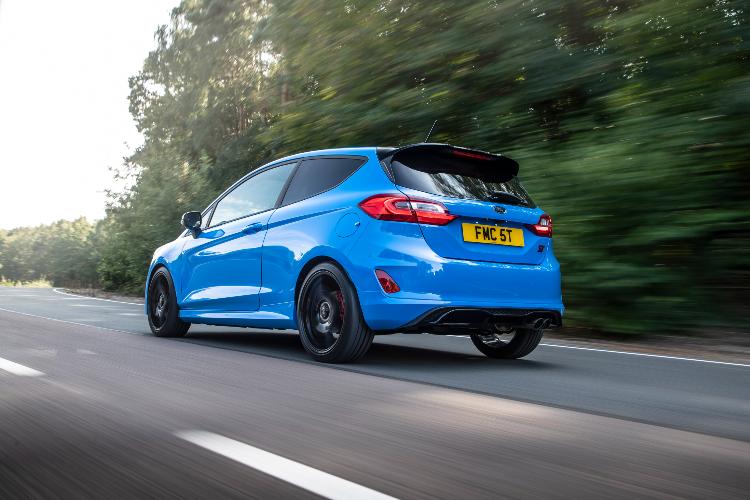 Yes, both the Fiesta and Focus lines are topped with hot ST (Sports Technologies) models, although again there are some key differences in terms of choice here. For the Fiesta, the ST comes only with a 1.5-litre, 3-cylinder EcoBoost petrol making 200hp and 290Nm. That’s good for 0-62mph in 6.5 seconds and a top speed of 143mph. The only choice you can really make is whether you want a 3- or 5-door ST, as this engine is only paired to a 6-speed manual transmission. There are 2 different specifications, though, called ST-2 and ST-3, the latter offering more kit for your cash. 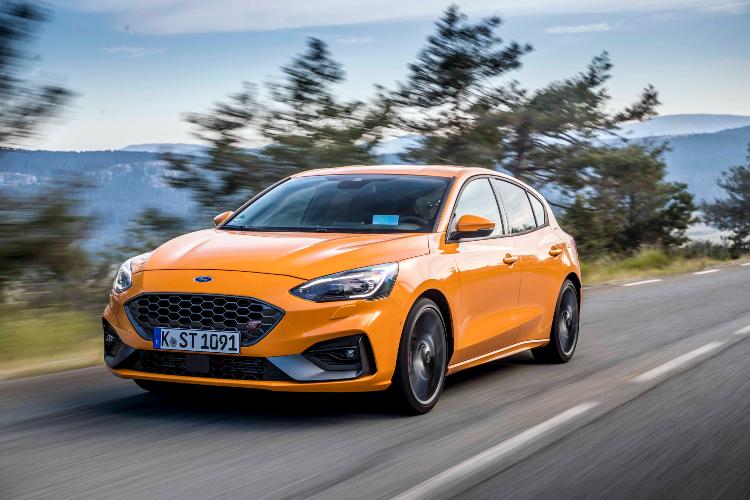 For the Focus ST, you can choose whether you want a Hatch or an Estate, manual or automatic, and even petrol or diesel. Admittedly, the automatic is only available on the 2.3-litre 4-cylinder EcoBoost petrol engine, and even then solely when it is installed in the Hatch body, but it’s there nonetheless. Every other Focus ST has a 6-speed manual gearbox fitted, and they all come in one generous equipment specification as standard.

So if I want the best fast Ford, I need a Focus ST? 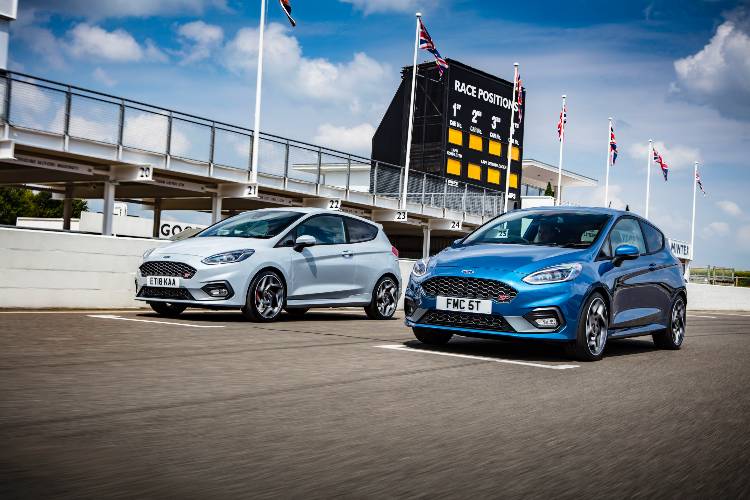 Umm, if you’re all about on-paper stats, yes. However, these bare numbers don’t tell the whole story. We really like the Focus ST and it’s an excellent car, albeit one which is much sportier and, er, ST-like as the petrol 280hp model than it is as a 190hp turbodiesel. But it has unusually rubbery steering, a very aggressive electronic limited-slip differential and suspension which can be quite hard in its more demanding drive modes. In short, the Focus ST won’t be to all tastes.

Whereas we’d be surprised if you can find anyone who dislikes the current Fiesta ST. It is surely going to go down as one of the all-time great hot hatchbacks ever built, as its 3-cylinder engine is a joy to work hard, while the chassis is a proper little jewel. Yep, if you want affordable fun in a car, you won’t find anything better than the Fiesta ST for even a remotely similar monthly leasing figure. And that’s allowing for its bouncy ride quality, too.

You mentioned the Fiesta Active earlier – is there not a Focus Active too? And are they 4WD? 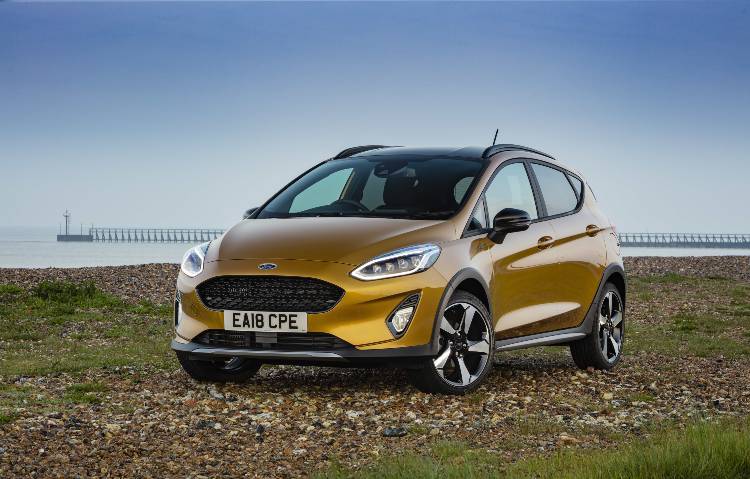 There is indeed a Focus Active, and it’s available as both the Hatch and the Estate. For more engine choice and greater equipment levels, you can upgrade this to an Active X. It’s the same story in the Fiesta line, with both Active and Active X trims, but here you have to have the 5-door body style; the Fiesta Active is not available as a 3-door variant.

However, despite both the Fiesta and Focus Active models having a higher ride height than their conventional relations, as well as rugged body styling and bespoke interior details, they’re not 4-wheel drive. Instead, they power their front wheels only and are considered lifestyle vehicles, rather than true off-roaders.

What about hybrid options? 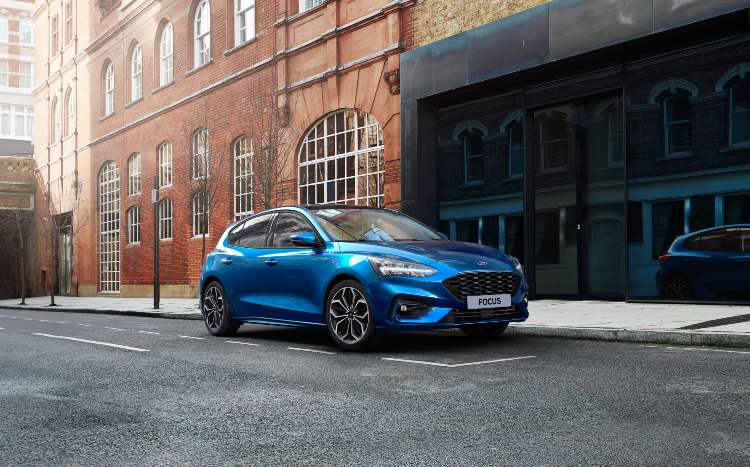 Neither the Fiesta nor the Focus has, at the time of writing, a plug-in hybrid or series hybrid derivative to call upon. But both Fords use the MHEV versions of the 1.0-litre EcoBoost engine, in either 125- or 155hp formats. This is a drivetrain shared by the Puma crossover, incidentally, a vehicle which is kind of a cross between the Fiesta’s platform and the Focus’ cabin space… but that’s a story for another day.

Which is the better car to drive? 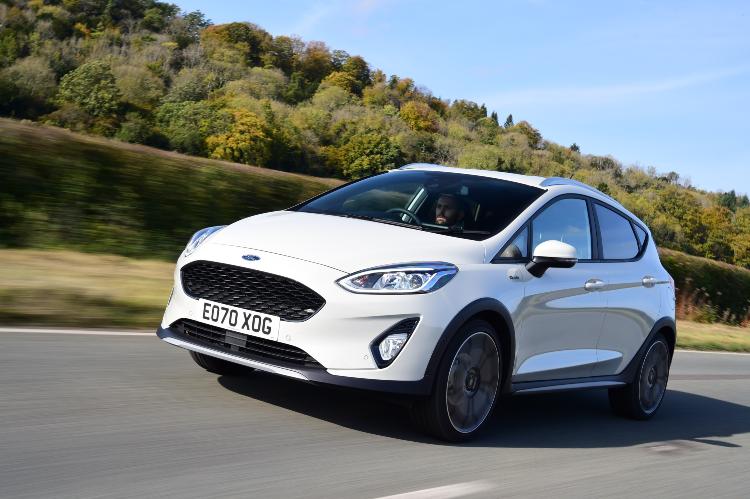 Difficult to definitively say. Over the years, there’s been a bit of a dynamic swing from Focus to Fiesta in terms of which is sharpest. When the original Focus launched in the late 1990s, it was a revelation to drive, even in its most basic formats, while the Mk4 Fiesta of the time was a bit stodgier (although, in fairness, much better than the Mk3 pudding it replaced).

Since then, however, the Fiesta has been getting steadily better and better to drive, while the Focus seems to have lost its keener edge. That holds true in the comparison between Mk4 Focus and Mk7 Fiesta. The bigger Ford is undoubtedly more composed and refined on the motorway, but it’s hardly as if a Fiesta struggles at 70mph either. And in and around town, and on country roads, the Fiesta feels a touch more alive and wieldier. If you avoid the ST model, the ride comfort and refinement is also surprisingly impressive in the smaller Ford hatchback, no doubt about it.

So which one should I choose: Fiesta or Focus? 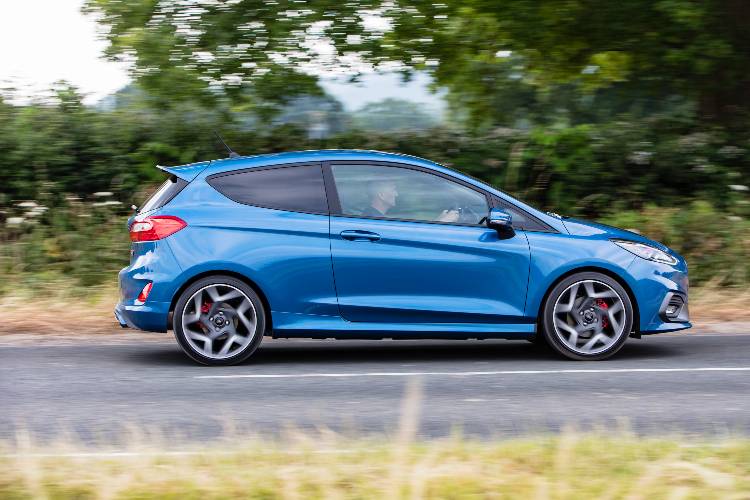 Tough one, as they’re both excellent cars in their respective classes. If you do a lot of motorway miles every year, or you need increased interior space, then the Focus is the choice. It has more automatic options, it’s more comfortable and quieter at high speeds, it offers economical turbodiesel engines when the Fiesta doesn’t, and it comes as a versatile Estate for the maximum in practicality. 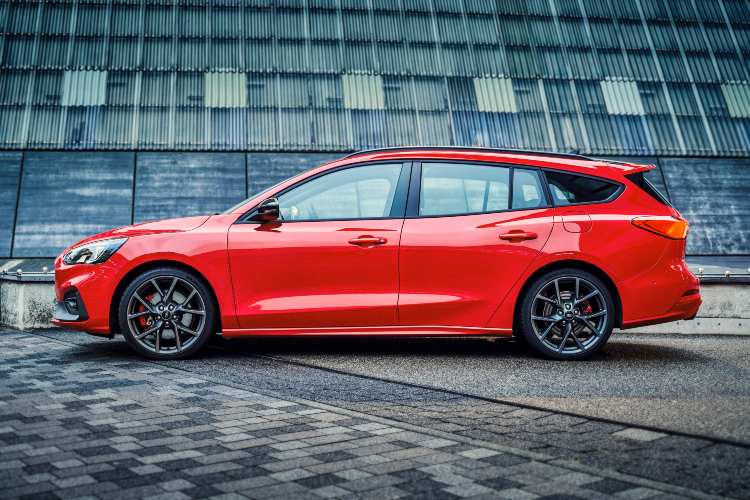 However, given its lower leasing prices, cheaper running costs and general, all-round excellence, we’d just edge towards the Fiesta here. Skip the 3-door bodyshell, unless you’re buying the ST model and you’ll be the only person in the car for the vast majority of the time, and we reckon you’d be very, very happy indeed with a good, mid-spec Fiesta. Something like an ST-Line or ST-Line X with the 125hp MHEV EcoBoost engine is going to do everything you could possibly need a daily driver to do. Pick a 5-door version and, unless you have kids who are 6ft tall, it should also work convincingly as a compact family car.

Let’s sum it up another way – the Focus is brilliant in the C-segment, but it’s probably not the segment leader among its rivals. The Fiesta, though? The Fiesta is top of the supermini class. You won’t get anything, that’s roughly the same size and value, that is better than it.